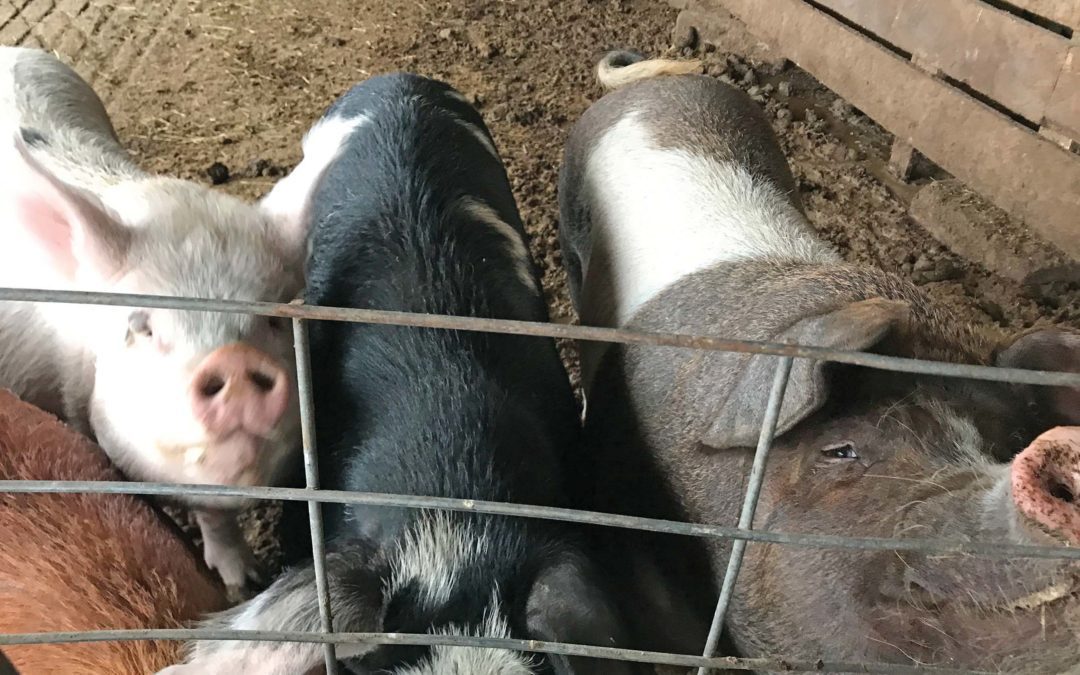 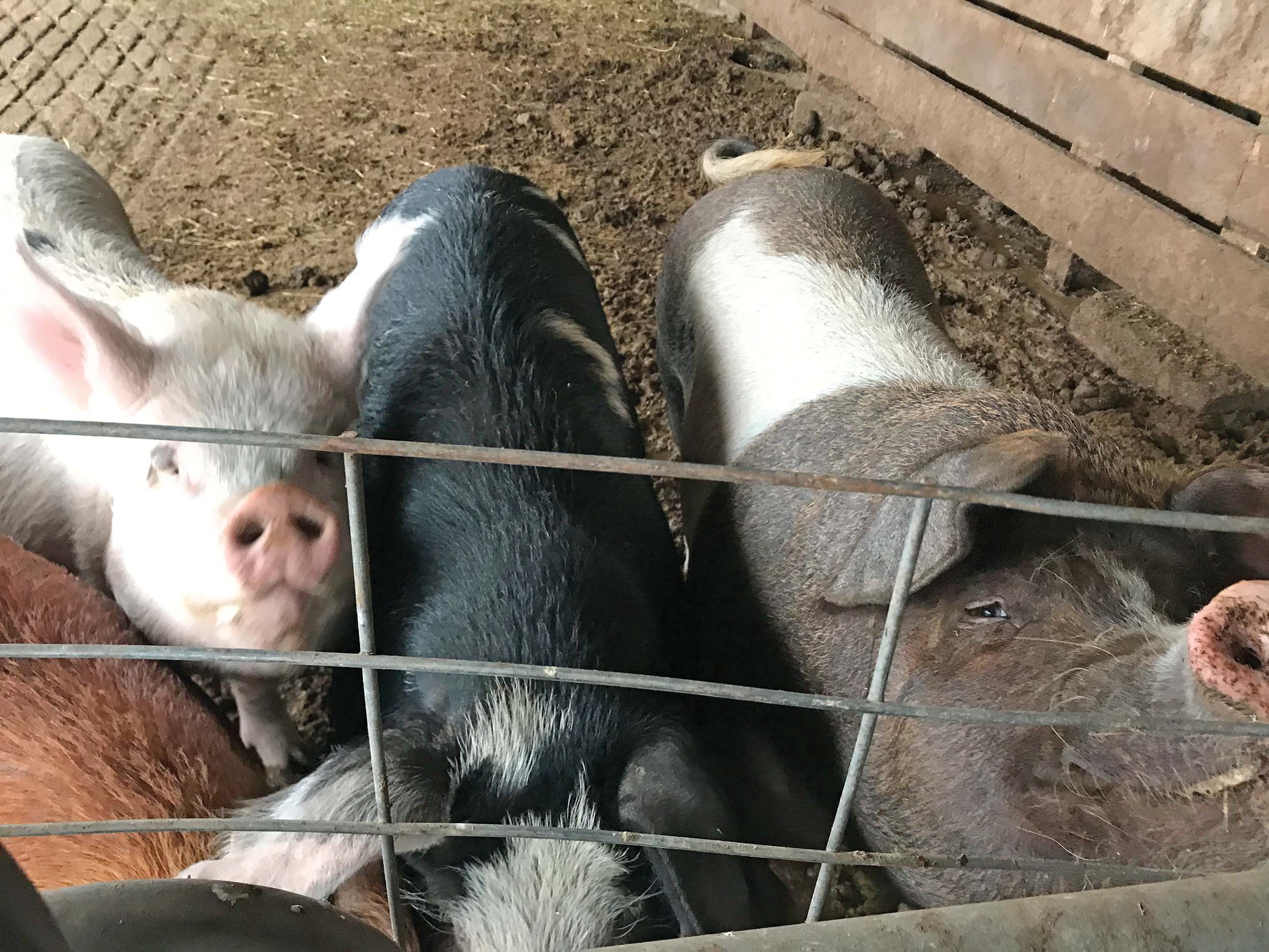 AGRICOLA FARM IN Panton raises nearly 200 pigs, as well as sheep, ducks and chickens. Last year the business opened a meat processing facility in Middlebury, but, like many Vermont producers, it still struggles finding a qualified slaughterhouse.
By Christopher Ross

Part 1 of a 2-part series. Read part 2 here.
ADDISON COUNTY — It’s the beginning of the slow season at Vermont’s slaughterhouses and meat processing facilities.
The “kill season” starts in September — after a summer of grazing — and runs until January or February.
It’s a schedule that goes back for generations in New England. Graze livestock through the summer, process animals in the fall, store and eat meat through the winter.
This year, however, it’s been different.
“We do 40 head a week in high season, and we’re doing 40 head a week now,” said Carl Cushing, owner of Vermont Livestock Slaughter & Processing (VLSP) in Ferrisburgh, a USDA-inspected facility that butchers and processes beef, pork and lamb for local producers.
At the moment VLSP is processing animals that were scheduled six months ago, Cushing said.
“And people are scheduling now for animals that haven’t been born yet.”
Companies offering meat processing services in Vermont are having difficulty meeting demand from meat producers. State and industry officials are looking for ways to straighten out bottlenecks that are holding back potential growth in locally raised beef, pork and other meats.
Increased demand is due in part to two factors related to the pandemic: heightened consumer interest in local food and reduced competition from large corporate slaughterhouses around the country, many of which were shut down because of COVID outbreaks.
Being busy sounds like a good thing, and for Cushing it has been.
“COVID has been good for our producers,” he said. “We’ve had a tremendous year.”
At the same time, a shortage of skilled labor has had an impact on how much VLSP can accomplish.
Cushing employs a few highly skilled and experienced family members, along with former VLSP owner Danny Clark and his son, and a few other skilled workers.
“Now I just need about six more,” Cushing said with a grim laugh.
But it’s hard to get good people, he added.
“It’s a special skill to break down a side of beef into cuts.”

STRATEGIC PLAN
Cushing’s experiences and concerns are echoed in Vermont Agricultural and Food System Plan 2021-2030, which was recently released by the Vermont Sustainable Jobs Fund through its Vermont Farm to Plate Initiative.
The plan lays out 15 strategic goals to achieve by 2030 to increase sustainable economic development, improve the environment and working landscape, increase access to healthy food for all Vermonters, and improve racial equity.
“Meat Slaughter, Processing, and Products” is one of the strategic plan’s 54 product, market and issue briefs, which were written by farmers, food business owners, producer associations, Vermont Agency of Agriculture, Food and Markets officials and others.
According to four-page brief, Vermont has:
•  3,600 livestock producers.
•  170 commercial operations offering slaughter, processing, wholesale distribution and animal food manufacturing.
•  1,700 retail outlets for those products.
•  seven USDA-inspected, two state-inspected, two custom and several on-farm slaughter operations.
The brief addresses challenges and opportunities for three components of the network: slaughtering, processing and products.
The challenges they face include:
•  finding and keeping qualified staff
•  seasonal fluctuations
•  health insurance costs
•  waste management control
•  limited education programs
•  limited value-added processing and co-packing options
•  a lack of in-state operations that can handle complex processing for large brands
•  many producers who do not have enough animals to start processed product lines
•  limited marketing expertise.
For more information about the plan, visit vtfarmtoplate.com/plan.

BOTTLENECKS
Brian Kemp manages Mountain Meadows Farm in Sudbury, a cow/calf-to-finish operation raising 350 calves annually. He was a contributing author for the “Meat Slaughter, Processing, and Products” brief.
“There has been a shortage of slaughterhouses affecting smaller producers without a year-round supply,” Kemp told the Independent. “Large operations like ours fill the slots first, then slaughterhouses try to fill in with small producers or custom cutting.”
When smaller producers run into scheduling problems during the kill season they end up with animals growing beyond their ideal weights. They have to feed the animals over the winter, sometimes with grain, which cuts into profit margins.
“With beef and pigs, that extra feed just goes toward fat,” Kemp said.
Mountain Meadows Farm has its animals butchered at Maple Ridge Meats in Benson, which is equipped to accommodate the more stringent third-party inspections that Mountain Meadows’ main customer, Whole Foods, requires.
In the past, Kemp has worked with a number of larger slaughterhouses in the state and region.
“The dilemma is that in the spring and summer their use goes down and they’re laying off people or cutting back their hours, so people are out of work for three or four months,” he said. “This has always been a conundrum for the state. There are not enough animals to keep facilities busy year-round.”
In which case, building more slaughterhouses may not be the best solution.
Cushing concurs.
On the one hand, “I think of it as ‘if you build it they will come,’” Cushing said. “A lack of slaughter and processing is one reason producers don’t grow. And getting more competition in is good for scheduling.”
But without other changes, increased capacity will also lead to increased idleness during the slow season.
Both Cushing and Kemp believe the state would do well to offer more robust education programs to train the next generation of meat processors.
The Vermont Agricultural and Food System Plan shares their concern and recommends subsidizing food safety training courses, as well as academic and technical tuition costs for workforce development.
But the challenge may be getting people to sign up for these courses.
“I’ve always felt like we don’t do enough,” Kemp said, “but the state says, ‘We offered it and no one signed up.’”
The Food System Plan also recommends developing an interactive system that would allow producers to view slaughter and processing schedules, trucking days, and services offered in real time, which could improve communication and efficiency.
This would require producers to do more planning and to have the foresight to call ahead and schedule, Kemp said. Perhaps it could shorten or even eliminate the slow season.
“Finishing in spring and summer is not ideal but it can be done,” Kemp said. “Butchering in the fall is traditional. It’s a hard habit to break.”
But Mountain Meadows Farm and other larger operations have found ways to finish animals year-round, so it’s certainly possible.
“It just takes a different management style,” Kemp said.

VALUE-ADDED
Alessandra Rellini owns and operates Agricola Farm in Panton, which raises pigs, sheep, chickens and ducks. With the help of grant money secured by Fred Kenney of the Addison County Economic Development Corp., she recently expanded her business to include a meat processing facility on Exchange Street in Middlebury.
“I started meat processing to do value-added products (like cured meats),” Rellini said.
She relies on slaughterhouses to butcher her pigs.
“The competition in Vermont is absolutely insane,” she said. “But that’s because we have a lot of good farmers doing good work.”
Agricola’s butchering needs extend only to obtaining the carcasses, so it has usually been easier to find openings in slaughterhouses.
“I usually call in October or November to schedule for the entire following year,” Rellini said. “This means I need to know my numbers a year in advance, but this is fine.”
But when Rellini called a few months ago everything was booked, and she had to call around to several facilities to find bookings.
Because Agricola ships products out of state, it requires USDA-inspected facilities. In Vermont there’s only a handful to choose from.
“It’s extremely complicated,” she said. “I must hire trucks. I have different animals going in different directions to different places, and things are randomly spaced.”
Whereas Agricola typically processes seven pigs a week, now “one week I might get 14 carcasses, and then I might go for three weeks with nothing.”
This has posed a challenge for her wholesale accounts.
“Thankfully they have been understanding and have kept my accounts open,” Rellini said.
Despite her current scheduling challenges, she’s not sure building more slaughterhouses is the answer.
“It takes very different skills to start a slaughterhouse,” she said. “People don’t appreciate how complicated it is to kill an animal right.”
Rellini cited her experiences with a regional slaughterhouse that provided her with carcasses that were unsalable and which eventually went out of business.
“An increase in slaughterhouses without the quality … people don’t know what they’re doing,” she said. “I need to see they know what they’re doing before I can trust them.”
Rellini feels like the state has been very responsive — not only with solving challenges but also with providing assistance to allow her to grow — and for that she is grateful.
Looking to the future, she suggested Vermont’s meat product sector could use help with developing new markets and promoting its products.
“Vermont markets can’t support Vermont farmers,” she said. “You need to sell in Boston and New York. If the state could help us get into those markets, that would make things sustainable. If people can find those markets, producers can keep slaughterhouses going.”
Next week: Read about a local company that is combining meat processing and retail, plus efforts to expand slaughter in Vermont.
Reach Christopher Ross at christopherr@addisonindependent.com.