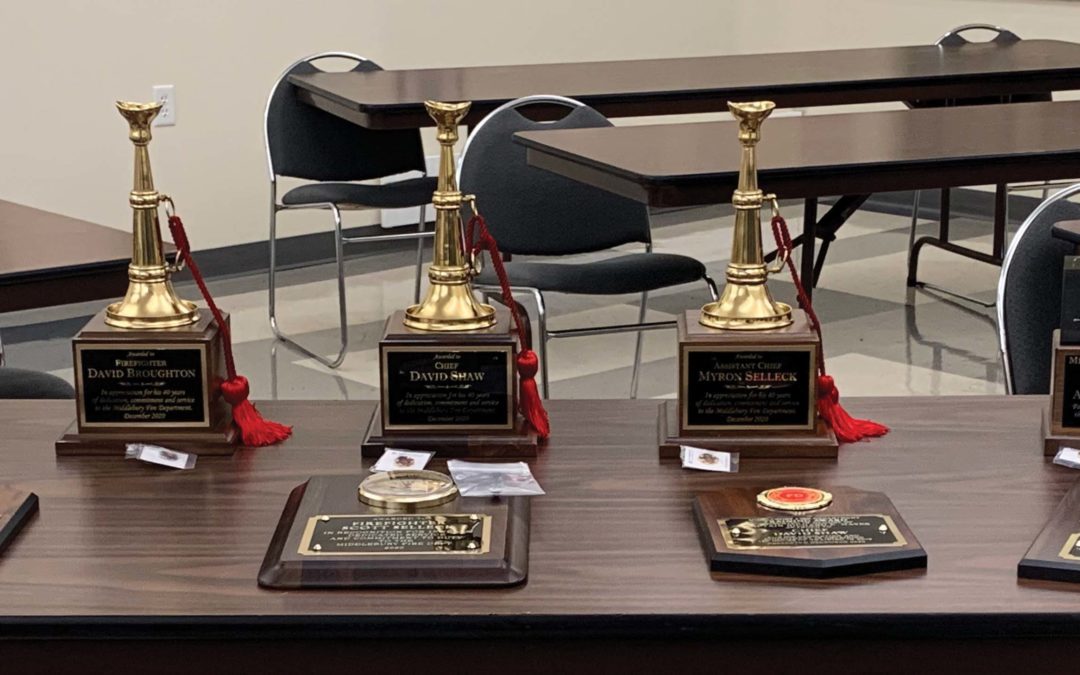 THESE ARE THE awards presented to Middlebury firefighters at a Zoom meeting earlier this month. Three members of the department were honored for 40 years of service.

MIDDLEBURY — Due to the COVID-19 pandemic, the Middlebury Fire Department and Battell Hose Company cancelled their jointly held annual awards dinner, which is normally in December. They did, however, recognize the contributions of their members via a Zoom meeting held on Jan. 13. Assistant Chief Myron Selleck presided over the virtual presentation of the awards.
Service awards were presented to the following members: Captain Tim Porter for five years of service; Firefighter Scott Selleck for 15 years; Firefighter Michael Bougor for 20 years; Assistant Chief Patrick Shaw for 20 years; Firefighter David Broughton for 40 years; Assistant Chief Myron Selleck for 40 years; and Chief David Shaw for 40 years of service.
Chief David Shaw received the Captain Richard E. Hayes Training Award for the most hours of training in the department for the prior year (2019) at 120 hours. This award is given in memory of Captain Hayes, who died in 2001.
Captain Tim Porter received the chief’s award in appreciation of his dedicated service and assistance beyond the expected.
The Middlebury Fire Department responded to 222 calls and its members completed a total of 1,308 hours of training in the last year.
The Middlebury Fire Department is a volunteer organization dedicated to responding effectively and safely to incidents in the pursuit of protecting life, property and the environment. We do this with a professional attitude underscored by extensive training and respect for our fellow residents, especially in their times of crises. The department is supported by the generosity of the residents, businesses, and property owners of Middlebury.
The Battell Hose Company  is a 501(c)3 nonprofit organization that supports the Middlebury Fire Department.