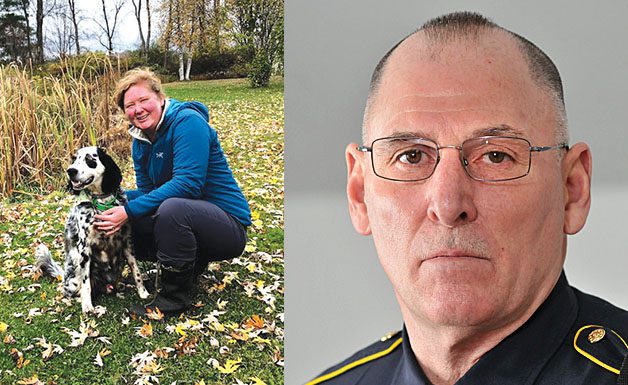 VERGENNES — Vergennes Police Chief George Merkel — along with a dozen area nonprofits and state agencies — is working on bringing to northern Addison County a collaborative effort among social services and police that Merkel and others believe will better serve area residents.
More than a dozen entities have signed onto what organizers have dubbed Addison County Project Vision North, which will require no new funding — just enhanced cooperation, according to Merkel.
The name was chosen because the new regional effort is modeled after the by-all-accounts-successful Project Vision program launched in 2012 by the Rutland Police Department and cooperating city social-service agencies.
James Baker, now Commissioner of the Vermont Department of Corrections, took over as Rutland police chief in 2012 at the height of the nation’s and region’s opioid crisis. He worked with the other agency heads to create Project Vision.
Baker credits the cooperation among all parties for a reduction in crime rates, more assistance flowing to Rutland residents who needed it, and an improved quality of life in the city.
“Burglaries dropped through the floor. Larcenies dropped through the floor. Break-ins of cars dropped through the floor,” Baker said, noting much of those statistics were tied to reduction of substance abuse.
“You’ve got to remember also that someone who is addicted brings a certain level of chaos into a family setting, which then spills into a neighborhood, and then causes unrest.”
Baker said his department already collected data on repeated “calls for service at given locations.” Project Vision started using that data to look at “what the underlying issues were” at those sites, often finding families struggling with financial stress, substance abuse, and/or domestic strife.
The close connections established with the social service agencies would often allow for police to find help for residents rather than take enforcement action, Baker said.
Often that communication would happen at open meetings of the Project Vision teams every other week, Baker said, where participants would brainstorm how to resolve those issues and provide help.
Eventually, he said, while social service and mental health workers did their jobs, police could focus on finding those “doing real harm” in the city — and building rapport with residents.
“We freed up the cops to do more problem solving. We freed up the cops to do more interaction with the community, which built up more trust in the community, which ended up with people calling in more information to the police department. It’s all connected together,” Baker said.

‘TEST OF TIME’
Another who saw firsthand how well it worked is Jennifer Mayhew, the newly hired executive director of the Turning Point Center of Addison County, which supports individuals and their families seeking recovery from substance use disorder and other addictions.
Several years after the effort began in Rutland, Mayhew worked for a community health agency that partnered with Project Vision. She said she’s seen the people the program helped and the statistics that show it works.
And she remembers sitting in on the biweekly meetings.
“It was really fun to see people having the same kind of energy four years after the creation of the organization. So it was really inspiring to me at the time. Programs come and go, and Project Vision has lasted and stood the test of time,” Mayhew said.
She worked with Merkel and others to bring the blueprint to the Vergennes area and was asked what it would take for Project Vision to succeed there.
“I think we have it,” Mayhew said. “I think the success is in the participation of leadership, and that’s definitely already here.”
Merkel said 19 people representing 13 entities attended Project Vision North’s fifth meeting on Jan. 11, one that Merkel said was largely devoted to tightening up organizational details. Two attendees were from nonprofits that had signed on since he formally announced the effort in late December.
“As this thing becomes more public, I anticipate more people becoming involved,” Merkel said.
Law enforcement, as well as Vergennes police, the Vermont State Police, Addison County State’s Attorney’s Office, and Vermont Department of Probation and Parole (which reports to Baker) are on board. The Vermont Department For Children & Families also signed on.
Nonprofits include Addison County Restorative Justice Services, the Counseling Service of Addison County, Age Well, WomenSafe, the Turning Point Center, Addison County United Way, John Graham Housing & Services, and Addison County Community Trust.
United Way Director of Prevention Jesse Brooks is serving as the effort’s interim chairperson.

ON THE GROUND
In Rutland, Project Vision had something that won’t be possible in Vergennes — a center inside the police department that housed a domestic violence advocate, a special prosecutor, two clinicians, a school resource officer, a Probation and Parole officer, and two social workers, according to Baker.
Merkel doesn’t see the lack of bricks and mortar as an issue. The meetings and the better lines of communication established should help his officers and state police troopers be better able to reach out to the right source for cooperation, he said.
“Whenever you get people to the table, whenever you get people who work together, who are familiar with one another, things go better,” Merkel said. “Me and my officers are going to have resources at our fingertips. Not that we don’t now, but now we have familiar faces. Now we’re working together.”
As Baker said was the case in Rutland, data will be key. Merkel said if police are going to the same location repeatedly for activity that might not yet be rising to a criminal level, officers can decide if social services should be called in.
For example, if police are visiting the same home to deal with verbal disputes, they could suggest counseling, he said, or maybe they will learn finances are triggering the arguments, and the family might need a few bucks to fix a car so a member can travel to a job, thus a referral to the right nonprofit for aid might help.
“Let’s say it’s not a law enforcement issue in the sense that’s it’s going to involve an investigation or criminal misconduct,” Merkel said, “Let’s say you run into a domestic dispute, and there are challenges to the family unit that if not alleviated one way or another may lead to other things … We could work with any number of agencies in order to alleviate some of the underlying issues.”
Without that intervention, domestic violence or substance abuse or other activity requiring law enforcement is more likely, he said,
“Everybody is out there trying to do the job and doing it well, but we’re going to get together as a group, social services and police, and try to identify these problems and try to alleviate or reduce the likelihood the problem is going to compound itself,” Merkel said.
The meetings can become a conduit for sharing of information.
“When we have our operations meeting, that’s when we’re going to discuss that data,” Merkel said. “Then they (social service agencies) are going to marshal their resources.”
But the connections will go past sit-downs every two weeks for his officers and state police, Merkel said: “If something happens outside those meetings, you have a list of resources you can call right off the bat.”
Also on the list of goals for Project Vision North is helping first-time offenders and those with minor criminal offenses, and those reentering communities who have been incarcerated or on probation or parole.
Baker said this was a critical component in Rutland: “It was making sure they were staying between the white lines and stayed successful in the community by putting these other services around them.”
Overall, Merkel and Mayhew are confident Project Vision North can better help law enforcement and social service agencies serve their communities.
And Merkel said he’s talked with his counterparts in Middlebury and Bristol, and the effort could grow further.
“It’s a work in progress. It’s going to evolve,” Merkel said. “Hopefully as it does, it becomes a template for other places in the county.”
He added, “We have tremendous law enforcement in this county. We have tremendous social service. I just think this is going to make us more effective and more responsive.”
Mayhew summed up her view of a program she said in Rutland has “no hierarchy,” and that gives everyone at the table at voice.
“It is community organization at its best, because there is no organization,” she said. “There are no bylaws. There is no kind of bureaucracy around it. It’s really just people talking to neighbors and taking care of our neighbors.”