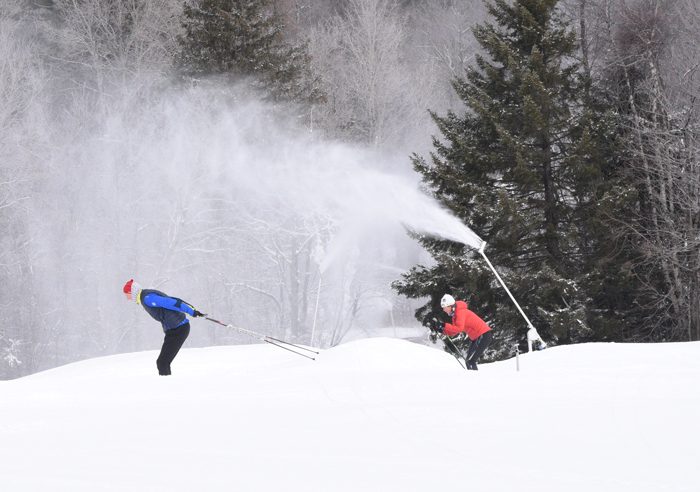 MONTPELIER — Gov. Phil Scott is easing some restrictions on school and recreational sports practices, effective today, Jan. 18. Among the changes, outdoor ski teams will be allowed to compete this winter, Scott said in his Jan. 15 news conference.
Nordic skiers from Middlebury and Otter Valley union high schools could begin to hit the trails soon, although the Otter skiers appear to have a clearer path.
OV skiers have a half-dozen meets on a modified schedule, beginning Jan. 27, with the first three meets set to be hosted by Woodstock, Mount Anthony and Brattleboro. Per state officials, the relaxed guidelines will allow only 25 skiers to compete at a time during meets.
OV Nordic will not host meets. The Mountain Top Inn in Chittenden, normally the venue for the Otters’ home meets, has said it will not host races, according to OV Athletic Director Steve Keith.
MUHS Activities Director Sean Farrell was less certain about the Tiger Nordic teams. In a Saturday email to the Independent, Farrell said he did not know when MUHS skiers could compete, although he wrote, “the first week of February would be my guess.”
Farrell said one question would be if the Nordic centers at which the Tiger teams normally race would agree to host meets. The Tigers’ home course, Rikert Nordic Center in Ripton, indicated when the center opened in December it would not.
As for the rest of the sports that could see competition — indoor track and wrestling had already been ruled out — Scott said practices could move into what he and other officials are referring as “Phase II” of winter sports.
Previously, practices could only consist of contactless skill and conditioning drills. Now, Scott said, teams can include drills with limited contact and conduct intra-squad scrimmages. Masks will still be required, and no scrimmages against other schools will be allowed.
Scott said state officials are still looking at allowing games and competitions at some point this winter, with the timing depending on COVID-19 statistics.
“We know how important these activities are for our kids’ well-being, both for their physical and mental health,” he said. “It is my hope that we’ll soon be able to allow for competitions. But as with every decision we make, it will be based on our data and the advice of our experts.”
Officials decided to allow schools to take this next step, Scott said, because there was no evidence of “spread of the virus tied to these activities,” meaning school practices, up to this point.