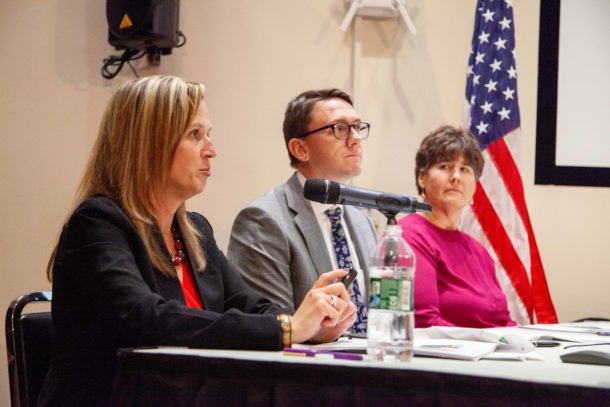 Green Mountain Care Board members chided OneCare Vermont for its administrative costs and salary increases on Wednesday, as the board reviewed the accountable care organization’s 2021 budget.
OneCare, a private company, has proposed to manage $1.46 billion of the state’s health care spending in 2021 — about the same as last year’s pre-pandemic budget. Part of that budget includes an 18% increase in administrative salaries and benefits.
As “businesses, schools, state, local government” continue to take austerity measures in the pandemic, “we should really think about what the right level of administrative budget should be this year,” said Alena Berube, director of health systems policy for the board.
In 2021 OneCare aims to expand the purview of the state’s all-payer system and increase the number of hospitals, doctors and patients who participate in the health care experiment.
Under the system, insurers pay OneCare, which then directs cash to hospitals and doctors in monthly payments. Those fixed payments are meant to incentivize medical providers to keep people healthy. Once fully implemented, the all-payer model will replace the current system of paying doctors for each procedure, which benefits doctors who provide the most expensive care.
As OneCare enters its fifth full year managing the system, regulators grappled Wednesday with administrative overhead costs and expressed frustration at a lack of information that would indicate the approach is working.
“Here we are in 2020, and we still can’t say that this population health initiative saved X amount of dollars because this program was put in place. And that’s what’s kind of troubling to me,” said board Chair Kevin Mullin of one of OneCare’s programs. “We have got to have some type of measurement of what [OneCare is] bringing to the system.”
The five-member Green Mountain Care Board will vote on the budget later this month.
The budget reflects a conciliatory effort to aid hospitals and doctors buffeted by the effects of the pandemic. Hospital officials complained this fall that OneCare dues were too high to make participation worthwhile. The accountable care organization will reduce the fees in 2021.
OneCare also reduced the risk that hospitals take on — the amount hospitals must pay into the system if they perform poorly.
Vicki Loner, CEO of OneCare, called the proposal a “conservative budget for 2021 that was carefully designed with our partners.”
The cash would allow the company to support doctors “with data analytics, a care coordination platform and payment reform opportunities to continue making progress,” she said. OneCare staff members are reviewing the board’s latest recommendations and will respond in writing later this month, she said.

A consequential year
2021 will be a critical year for OneCare Vermont.
State officials will begin discussions about whether to continue rolling out the all-payer model and sign a second five-year contract with the federal government, which would run from 2023 to 2028.
OneCare also wants to polish its image after a series of setbacks this fall. In September, some primary care doctors left OneCare after the ACO reduced payments for doctors. The two sides ultimately hashed out an agreement, but only after a well-publicized spat. A group of health care nonprofits also wrote a letter asking the state not to renew the agreement.
About the same time, the Centers for Medicare and Medicaid Services issued a warning letter to the state because OneCare had not met targets for the number of Vermonters participating in the accountable care organization. As a result, Agency of Human Services Secretary Mike Smith laid out a systemwide “reboot” last month.
OneCare is still far behind its goals for patient participation. In 2021, 238,000 Vermonters are expected to be enrolled through their primary care doctors. That’s about 46% of people who are eligible, well below the target of 62%.
Later this week, the Green Mountain Care Board and the administration will send a letter to the federal government, asking to lower the participation targets.

Better value?
As part of the latest budget, OneCare has promised more funding for primary care initiatives. The company also aims to fund more care management programs for people with hypertension.
Board members asked why OneCare will decrease funding for population health initiatives, which include programs such as funding social workers in doctors’ offices. They also pushed the company to better measure and quantify results.
The population health effort “lacks specificity and is not subject to empirical evaluation,” state Health Care Advocate Mike Fisher said in written comments to the board.
The Green Mountain Care Board has suggested that OneCare flatline salaries because of the pandemic. The company instead proposed a 2% increase across the board and had planned to restore Covid-related salary cuts and position reductions. All told, salaries and benefits would cost $9.8 million, up from $8.3 million this year.
Some board members said they need more information before making a decision on whether the increases are necessary.
The board also asked the ACO to justify a $5.7 million reserve or to reduce reserves that aren’t set aside for a designated purpose.
OneCare is also increasing overhead and occupancy fees even though employees are working remotely, board staff said.
The main problem? Vermonters still don’t know what OneCare is, Mullin said.
Even though OneCare spent nearly $70,000 on marketing last year and has increased advertising buys, “there’s still a lack of understanding,” Mullin said in an interview.
OneCare exists to give Vermonters “better value, more coordinated care, earlier care … and it’s trying to get inefficiency out of the system,” Mullin said. “It’s trying to keep them healthier and to create a better life experience.”
“I don’t think that message is getting out there.”