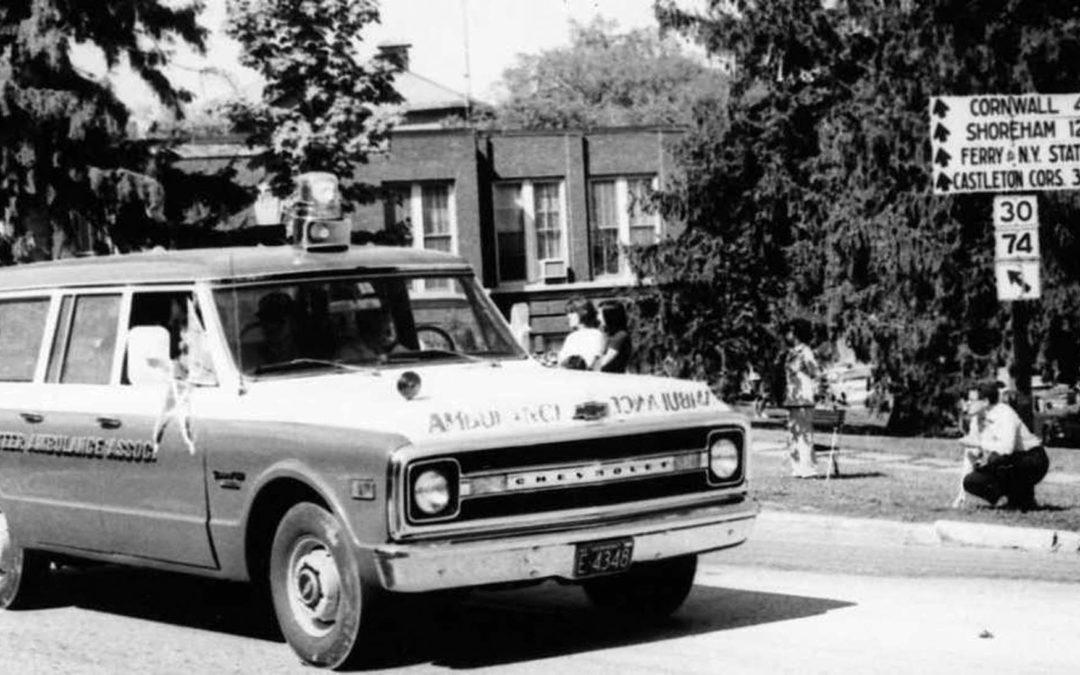 Being able to render care which made them more comfortable or more likely to survive, was really rewarding.
— Dick Forman

Dick Forman got involved with the nascent Middlebury Volunteer Ambulance Association in 1971. He recalled that he was looking for a way to give back, “which most of us wanted to do in those days.”
He was, and still is, a Middlebury College employee. The institution encouraged community service, and Forman had a particular interest in health care — specifically, pre-hospital care.
“I was getting hands-on training and involvement, and at the same time I was helping the community,” Forman said. “That’s where the organization was in the early years; it was neighbors helping neighbors. ”
Forman remained active with the MVAA, now MREMS, until 1986. Along with his direct work with patients, he would helm the organization for around three years and eventually took over the training of new recruits. He also helped the Vermont Health Department set rules for establishing local rescue organizations and maintaining standards for care.
“My wife claims I trained everyone in Addison County in one way or another; at least that’s what if felt like to her,” he said of the time commitment.
During its infancy, the MVAA received a lot of service calls from folks who were really unsure whether they should be calling.
“People called us only as a last resort,” Forman said. “At least initially, we would get an ‘Oh, I’m sorry to bother you, but X, Y or Z is happening.’”
But as the months and years went by, residents became more comfortable calling for service with no hesitation. And Forman was grateful for that.
“Being able to render care which made them more comfortable or more likely to survive, was really rewarding,” he said.
Forman in those days also worked part-time in Porter Hospital’s Emergency Department, so he got a balanced perspective of health care services in the county.
“I was able to see what we did, pre-hospital, and how that integrated with what was done in the hospital,” Forman said. “It gave me some neat insight in knowing what to teach people.”
Forman conservatively estimates he trained 1,000 emergency response recruits during his days with the MVAA.
“Knowing that those people continued on and rendered the kind of care that I would want to have rendered for me, was incredibly rewarding,” he said.
People who come into the emergency responder field tend to be adrenaline junkies, Forman noted. This could lead to quick analysis and treatment of a case — which can be the wrong strategy.
“I wanted to build in the sense of observation and caution before you leap into action, and my way of doing that was to tell people that the first step in care was always, ‘Hi, my name is Dick,’ and that would slow you down just enough that you didn’t start doing CPR on someone with a sore toe.”
That catch phrase continues to follow Forman through life.
Several years ago, Forman hurt his back and had to call an MVAA crew. One of the responding techs — who happened to be a former Forman trainee — introduced himself with, “Hi, my name is Dick.”
Forman, a wonderful musician and director of Jazz activities for the college, is proud of the organization that now called itself MREMS. He recognizes there have been many changes since that band of altruistic volunteers launched the service in 1970.
“When the group started, it was really ‘neighbors helping neighbors,’” Forman said. “We saw a need, and we met it as community members. There was something reassuring about somebody coming into your house at a very difficult time, and just being a human being, and being there to help you make this transition from where you were to being better again. We were just people who said, ‘You’re hurting? We’re going to help you.’”
The world in general, and emergency health care specifically, are in different places than they were a half century ago, Forman acknowledged. The economy is such that households are almost required to have two wage earners in order to make ends meet. That means less time for civic contributions. That trend — along with advances in medical technology and standards — have contributed to a decline in volunteers and an upswing in paid staff at what is now MREMS.
“There is a difference when you know the people who are treating you are paid professionals,” Forman said. “Maybe those professionals are doing a better job, and maybe they’re authorized to perform more things than we could do in the field, but at the same time, they’re kind of our employees. And you relate differently to that. The world has changed, and how we provide this service has changed.”