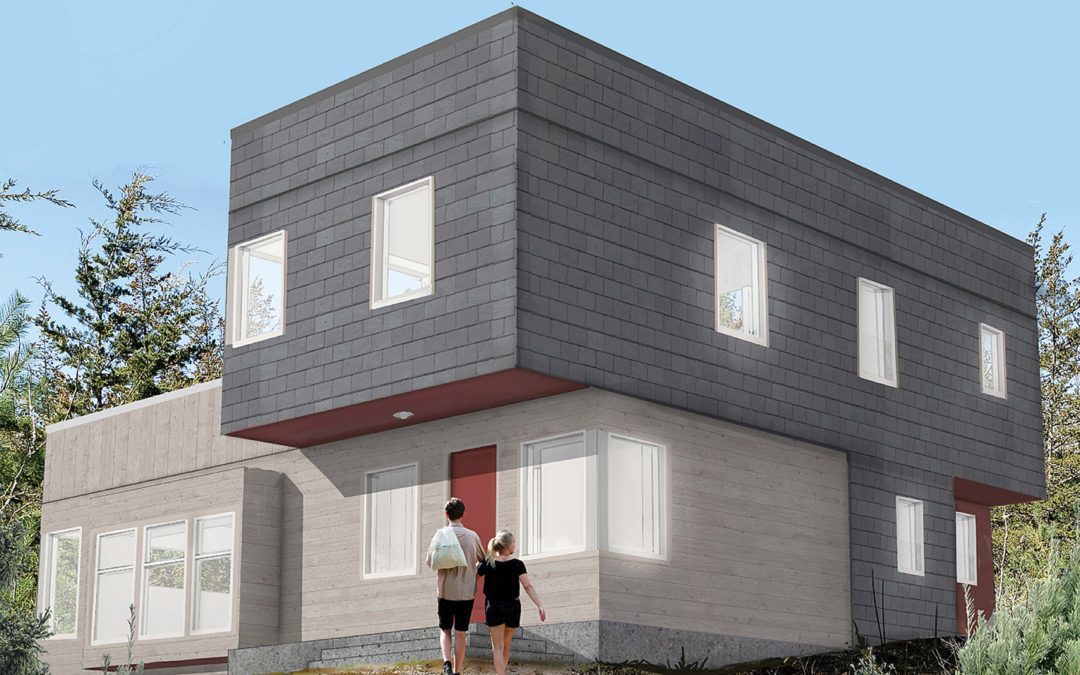 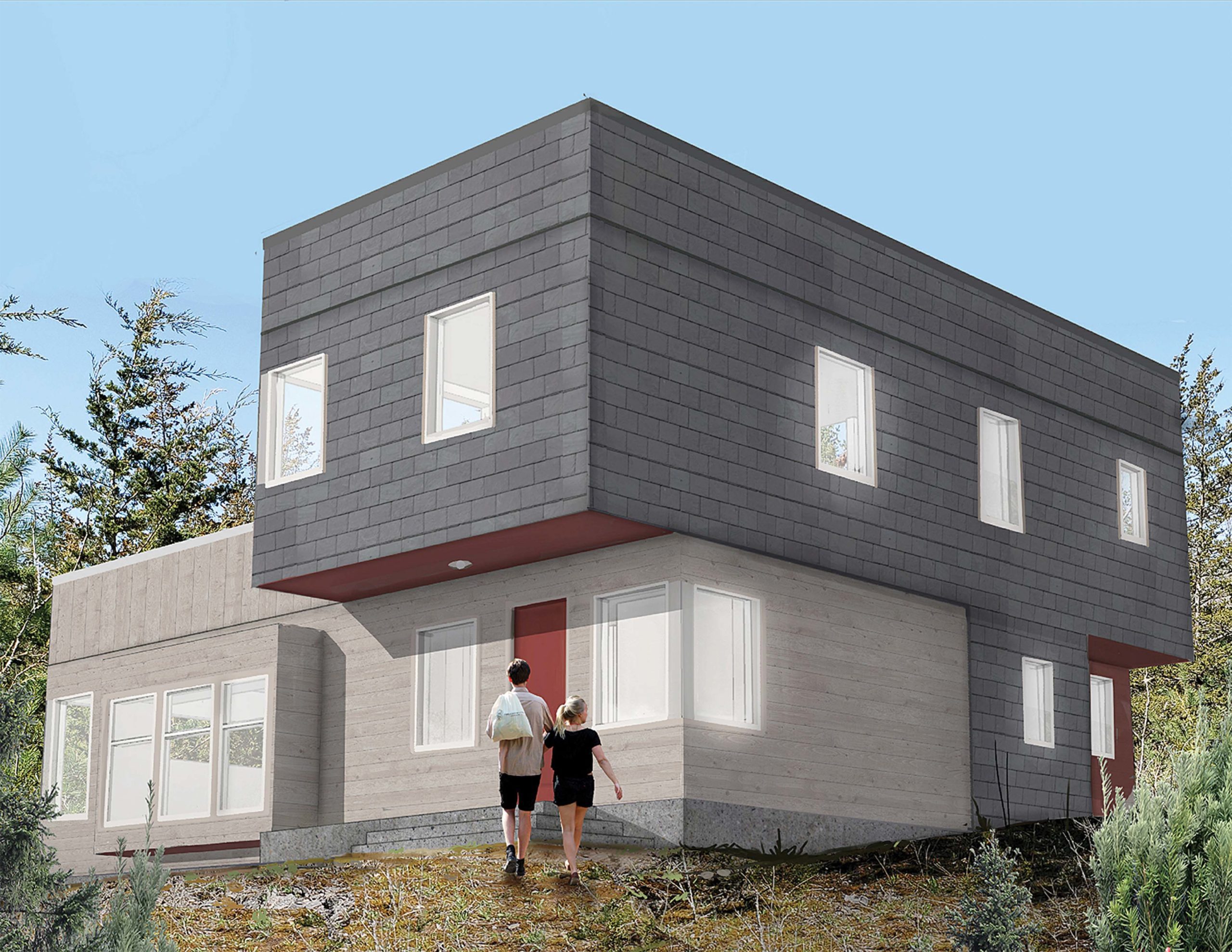 HABITAT FOR HUMANITY Addison County will build the house seen here in an architectural rendering starting next spring on a Booth Woods lot in Vergennes. Middlebury College students of Middlebury architect John McLeod designed the home.
By Andy Kirkaldy

We really want to plant our flag firmly in Vergennes. Vergennes is a wonderful town.
— Steve Ingram, Habitat for Humanity Addison County

VERGENNES — The latest evidence of a productive partnership among Habitat for Humanity Addison County, Middlebury firm McLeod Kredell Architects, and Ripton contractor Alex Carver stands proudly, all 100 square feet of it, on a lot in Vergennes subdivision Booth Woods just off Green Street.
Assuming all goes to plan, by this time next year a largely built Habitat for Humanity home will stand next to it.
And that home has already been designed by members of a Middlebury College class taught by McLeod Kredell principal John McLeod. Construction is scheduled to start in the spring.
Within the next several years, that home will be joined by three more Habitat houses built by volunteer labor for low-to-moderate income families who meet the nonprofit’s financial guidelines. Those homes, too, will be designed by McLeod’s students.
How does the shed fit in?
Sheds are features required by the parent Habitat for Humanity organization for all its new homes. And this shed in Booth Woods was built this summer and installed on the lot by a program run by McLeod Kredell Architects known as Island Design Assembly, the brainchild of McLeod, partner Steve Kredell, and Carver.
Island Design Assembly, or IDA, for eight years built a variety of structures on islands off Maine, offering teams of up to a dozen college architecture students from around the nation week-long opportunities to participate in hands-on design-and-build projects. Half the slots on the teams are reserved for Middlebury College students.
This year the COVID-19 pandemic put a stop to IDA’s plans to gather students in Maine. McLeod, Kredell and Carver consulted with those who had signed up and were told most still hoped to do something, and the IDA partners cast around instead for a Vermont project.
McLeod said they wanted to make it happen if possible.
“My two co-leaders and I felt even more compelled in a way to try to make it work,” he said.
It wasn’t as simple as just finding a project. The principals had longstanding ties with the county Habitat organization, and they also had knowledge of the Booth Woods plans — for which McLeod’s students have already designed more homes.
“We did consider other projects, for sure, but that one came to mind immediately,” McLeod said. “And fortunately the Habitat leaders said, ‘Sure.’”
But they also had to find a place for everyone to stay during construction. When IDA was able to rent all of Goshen’s Blueberry Hill Inn from Aug. 8 to 15, they green-lit the summer’s effort, at least for about half the dozen original students, plus three more who were recruited after COVID precautions and restrictions led to six dropping out.
“We ultimately were able to find a place to do it here,” McLeod said.

MATCHING STUDENTS & PROJECT
Habitat for Humanity Addison County President Steve Ingram talked about this project and the value of the partnerships.
He said he was thrilled with the finished shed, which the IDA group delivered to the site on a Goodro Lumber flatbread truck and installed at the end of their week-long effort.
“There are storage sheds and then there are storage sheds!” Ingram wrote in an email. “Habitat got one of the latter. What the students produced is stunning. The entire process was inspiring to behold.”
Ingram traced the roots of the Habitat-college-McLeod Kredell partnership. He said it began when Habitat board member Ashley Cadwell, who knew of McLeod’s 2017 partnership with Middlebury College, put two and two together.
Ingram said Cadwell suggested McLeod’s students could start putting their design studies to practical use on Habitat’s behalf, an arrangement all parties agreed upon.
“(He said) ‘You have undergrads that are designing things in theory. Wouldn’t it be cool if they actually designed something that would be built and to cap it off it would be something that would be affordable in perpetuity?’” Ingram recalled.
Habitat, of course, requires those architectural plans, and Ingram added students can see their work come to fruition for a good cause.
“We need to have houses designed. We don’t show up and make a sketch on the back of a box top,” he said, adding, “For Habitat it’s just a marvelous situation. We see it as a win-win.”
Because of energy efficiency features as well as the price point of the homes Habitat can afford to sell to clients, Ingram said, they are cheaper to own than typical rents in Addison County for family apartments — often with total monthly costs including mortgage, utilities and taxes of around $900.
“We can get our clients into houses for significantly less than they pay in rent,” he said.
To be eligible for a Habitat home a family must meet income criteria. For example, a family of four with both parents or guardians working and two children in the household should make between $34,600 and $54,400, or between 50% and 80% of what is considered to be living wages for a family that size in Addison County.
Habitat for Humanity Addison County bought the four Booth Woods lots about two-and-a-half years ago, Ingram said, and the organization is looking forward to next year’s construction and beyond — and is accepting applications from potential clients.
“We really want to plant our flag firmly in Vergennes,” he said. “Vergennes is a wonderful town.”

A NEW NAME
And it is possible the new development in the partnership among the college, the company and the nonprofit will continue in the future.
McLeod said this summer’s experience in Vermont convinced him, Kredell and Carver that it was not necessary to travel to Maine for the program.
IDA now has a new home and name, he said.
“It went so well here. We’ve had a great run in Maine, but it felt so good to bring it back home to our local community,” McLeod said. “So we’ve decided to relocate it and be based in Vermont, and we’re actually going to change the name now to MDA, Mountain Design Assembly.”