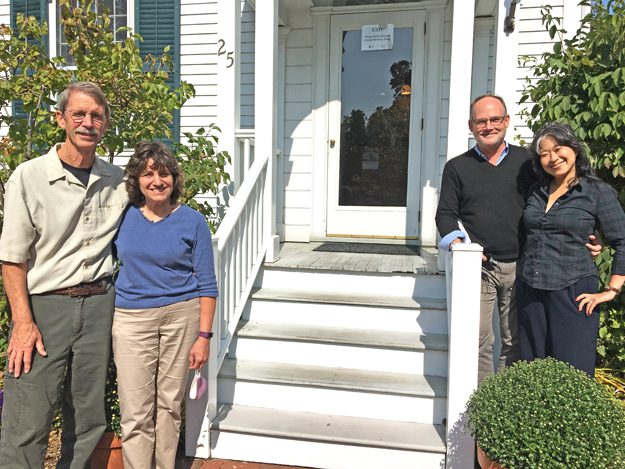 “When you look at this property inside or out, I don’t think there’s one thing we haven’t touched. There’s nothing here we haven’t changed. It looks completely different than when we came here.”
— Dan Brown

MIDDLEBURY — Matthew Robinson and Serena Kim are planning ahead for a big wedding at their new acquisition, Middlebury’s historic Swift House Inn.
Their own.
It’ll be on July 3, 2021, which will carry symbolism for them for a number of reasons — not the least of which is it will mark the one-year anniversary of their dogged pursuit of the inn property, which they officially purchased from longtime owners Dan and Michelle Brown on Wednesday, Sept. 23.
“We’re inheriting (the property) in better shape than when (the Browns) had it,” Robinson said during a socially distanced interview on the spacious, airy deck of Jessica’s Restaurant, the on-site dining establishment that’s also part of the deal.
“It’s a gorgeous piece of property.”
Robinson and Kim hail from the Pasadena, Calif., area.
He’d been working for 20th Century Fox since 2017, when that company was acquired by Disney. This led to layoffs, and Robinson was among the casualties.
He turned to consulting in the entertainment industry. A friend quipped that since Robinson was already quite the entertainer in a home that resembled a boutique hotel, it seemed natural progression for him to become an innkeeper.
Robinson took the advice very seriously, and attended a hospitality industry trade show in Las Vegas in early 2019.
“I was really excited and met some really interesting people,” Robinson recalled.
He and Kim made the first of several inn-hunting expeditions to Vermont, New Hampshire and New York in March of 2019. They visited more than a dozen properties during those trips before flagging the Swift House Inn last July.
“We’ve seen so many boiler rooms,” Kim said with a smile.
“I’ve seen a lot of scary basements,” Robinson added. “But it also gave us a sense of what we were looking for and how to narrow it down.”
One of their prerequisites: The inn had to be in a college town, to help generate more guests stays and provide cultural experiences for themselves and customers.
“There are a lot of beautiful inns out there that are in towns that are essentially a traffic stop,” Robinson said.
Needless to say, the Swift House Inn checked the “college town” box. And the couple found the property to be in super shape.
A back-and-forth between buyers and sellers ensued, followed by financing discussions and other issues that need to be sorted in a substantial real estate transaction.
And then the COVID-19 pandemic arrived in mid-March of this year, which created an understandable delay in the consummation of a deal.
“It was like the world had ended,” Kim said of the impacts of the pandemic.
But both couples re-engaged in talks in May, before closing on the deal late last month.
Though they’ve spent most of their lives on the West Coast, neither Robinson nor Kim are intimidated by the prospect of Vermont winters. Robinson grew up in Buffalo, so he’s already seen his share of snow.
They’re also confident in their ability to keep the Swift House Inn and Jessica’s on the successful path established by the Browns during their 16 years of ownership. Robinson’s professional background is in the banking, investment and TV program distribution fields. Kim is a writer and avid gardener. Together, they’ve been honing their innkeeping skills through courses and advice from the Browns.
Kim and Robinson promised to add some of their own personal touches to the property and operations down the line. They’re getting an asset with a lot of history and a loyal following.
The original portion of the inn’s main house was built by Samuel Swift in 1814. It served as a primary residence for the Swift family, as well as former Gov. John W. Stewart, before beginning its service as an inn in 1982.
OWNED BY THE BROWNS
The Browns acquired the property — which now includes a carriage house and gate house — on June 29, 2004. They had already logged many years as successful innkeepers by that time, primarily in Maine. A buyer had made them an offer they couldn’t refuse on their previous property, which sent them scouring Maine and Vermont for a new venture.
“There was basically nothing available for sale in either state,” Dan recalled.
But they got some hope when Wendy Beach, a broker and partner with the Hearthside Group at Basin Harbor, told them the Swift House Inn might become available.
“The size of the inn was just what I was looking for,” Dan said. “It was in a college town and had the potential of being a very viable business. And it was in Vermont. We knew the college would provide great business, but just as important to us, it would provide a great quality of life for us.”
And it has.
Dan and Michele Brown have succeeded in the hospitality industry not only because of good business acumen, but because of their complementary skills. Michele has always been adept at networking with customers and meeting their needs, while Dan was always been proficient with the ledger, a hammer and wrench.
“One thing we’re very proud of is that when you look at this property inside or out, I don’t think there’s one thing we haven’t touched,” Dan said. “There’s nothing here we haven’t changed. It looks completely different than when we came here.”
Some of their guests have become good friends.
“I would say the best part of owning the inn is the relationships we’ve made with the guests and our staff,” Michele said.
So why sell?
“It’s just time,” Dan said. “I’m 71. We’ve got other adventures planned — but nothing in the business area.”
And rest assured, the Browns are going nowhere. They bought a house in Middlebury 18 months ago. Dan will continue to serve on the local selectboard, while Michele will pursue her varied interests.
“Our goal was to be here five years and move on; we’ve out-stayed that,” Dan said. And that’s just fine with him; after decades of taking on inns, they’re happily checking into retirement in Middlebury.
Reporter John Flowers is at johnf@addisonindependent.com.