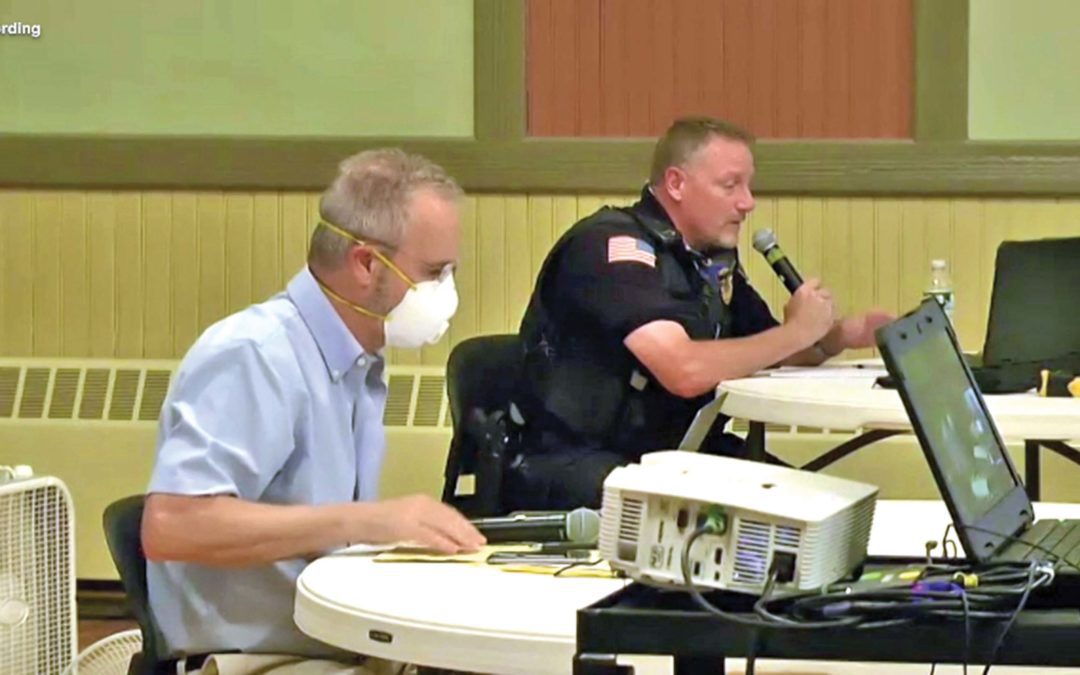 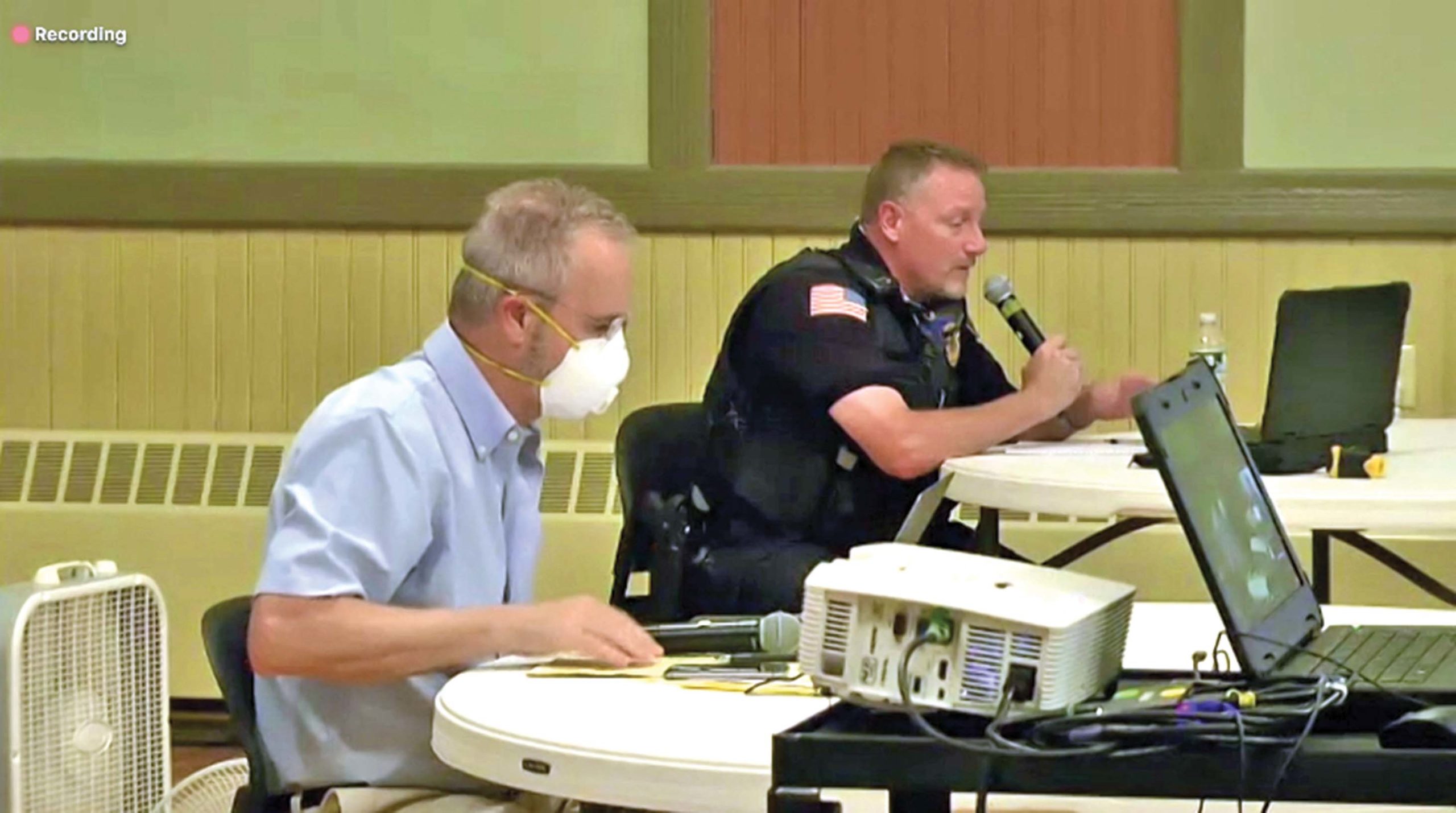 BRISTOL POLICE CHIEF Bruce Nason, right, responds to a question during Monday night’s Community Conversation on Safety, Security and Policing, which was convened in Holley Hall and via Zoom. Nearly 60 Bristol residents participated in the two-hour discussion, which was moderated by Bristol resident Sen. Christopher Bray.
By Christopher Ross

BRISTOL — Many of the nearly 60 people who participated in Monday night’s Community Conversation on Bristol Policing expressed support and appreciation for the Bristol Police Department.
Many also came with questions and concerns for Bristol Police Chief Bruce Nason, who was there, as he said, to listen and answer questions.
Topics during the roughly two-hour discussion — which was convened both in person and via Zoom, and was moderated by Sen. Christopher Bray, D-Bristol — ranged from de-escalation and bias training to police funding to policing alternatives.
One participant, Maura Donnelly, who owns the children’s store Simon Says on Main Street, told a story that contextualized local policing in the larger national conversation, which at the moment is centered largely around bias and racism after the May 25 Minneapolis police killing of an unarmed Black man, George Floyd.
“I always ask (Simon Says customers), including the children, if they want a receipt, because my child is supposed to get a receipt when he spends money so he can document (what) he spends his money on,” Donnelly said via Zoom. “The other day … this young child was in the store, maybe 8 years old, she’s brown … her response to me, when I asked her if she wanted a receipt, was, ‘Yeah, I should probably take one in case I get stopped by the cops.’
“Now, I’m not saying there’s ever been an incident in this child’s life where she’s interacted with the Bristol Police Department in a negative way,” Donnelly continued, “but through the water stream of our country — that’s there. My son himself, who’s white and knows about George Floyd’s murder, is trying to reconcile that image of police with what he sees as a positive image in (this) town. He says, ‘That couldn’t happen here, right? Because the police don’t do that here.’ So I think that even though we don’t have any reports of people of color feeling unsafe that we can point to, it is in the water stream of the larger culture that we live in, and I think that recognizing that is really important to our discussion.”

BIAS
“Does BPD know if Bristol BIPOC (Black, Indigenous and People of Color) people feel ‘safe’ the same way I do as a white person?” asked Allison Sturtevant via Zoom chat. “Do BIPOC people assume as I do that police will protect me and don’t worry about terrible consequences unless actually engaged in illegal behavior?”
Sturtevant also asked about data related to BIPOC encounters with the BPD.
There is, Nason said, and he’s working on it, but the format of that data has caused a delay in gathering and reporting it.
According to the Vermont chapter of Justice for All, which has compiled statistics on traffic stops for every police department in the state, Bristol police between 2014 and 2018 stopped Black and Asian drivers at lower rates than their share of the population, but stopped Hispanic drivers at a much higher rate.
Middlebury and Vergennes police departments, on the other hand, stopped Black, Asian and Hispanic drivers at significantly higher rates than their share of the population.
The data can be found online at justiceforallvt.org/tsrd_by_police_agency_all.
Bristol resident Mike Dash called for more inherent bias training for the BPD, as well as training for de-escalation, and he pointed out that training accounted for only a fraction of the police department’s overall budget.

TRAINING
That is in part because some of the training the BPD receives is free, Nason said.
One of the department’s part-time officers, Andrew Graham, is a use-of-force instructor, and one of its full-time officers, Drew Biondi, works in the medical field, which has allowed the BPD to tailor some of its internal training, he said.
Training in de-escalation techniques is a recurring topic in the community, Nason acknowledged, and the BPD is open to suggestions about specific training opportunities.
The department has also received training from the United Way of Addison County in how to assist people in crisis.
“We want all members of the public to feel comfortable when they see an officer show up (and) that they’re not just going to be grabbed and yanked and pulled somewhere,” Nason said.

ALTERNATIVES
Participants pointed to several existing alternative models that could provide a roadmap for re-imagining policing in Bristol, including:
•  Project Vision, a coalition of more than 300 nonprofits, businesses and government entities organized by former Rutland Police Chief James Baker to explore non-law-enforcement approaches to issues like substance abuse in that region. Police hold weekly meetings with social services organizations and there has been a reduction in certain kinds of calls and arrests (projectvisionrutland.com).
•  CAHOOTS, a mobile crisis intervention team in Eugene, Ore., designed an alternative to police response for nonviolent cases, including mental illness, homelessness and addiction (whitebirdclinic.com).
The BPD would be open to exploring such collaborations, Nason said, citing existing collaborations, including one between Bristol police and Jesse Brooks, the director of prevention for the United Way of Addison County.
But, he pointed out, it’s not always clear what police are being called to do when they receive calls.
“Many times, when some of these instances are occurring, people don’t know what is going on,” he said. “That’s why we are called first. We are first responders. And once we get there and assess the situation we reach out to those (social services providers) or different partners that we work with and have been developing over the last couple of years. Some of those calls, it’s just because of the time of day or the day of the week (when social services aren’t available), and so we do the best that we can to kind of fill in as a gap. We’re not taking their place, we’re working alongside of them.”

DISTRICT AND BUDGET
Former town official Bob Bernstein was one of several participants who expressed concern about how the BPD is funded.
Currently, taxes on 661 properties within the roughly one-square-mile Bristol Police District pay for the police budget, which amounts to nearly half a million dollars a year.
Highlighting the confusion (and feeling of inequity) this sometimes causes, Bernstein pointed to a database compiled by VTDigger and the University of Vermont Center for Research on police budgets (vtdigger.org/2020/07/01/how-much-is-your-town-spending-on-police-search-uvm-vtdiggers-statewide-database).
The data suggest that per capita police spending in Bristol is $120, quite a bit less than the Vermont average of $184.
But, as Bernstein said, it’s completely wrong — because it incorrectly assumes the entire town of Bristol pays for the police budget.
Taking into account the number of properties in the police district, and the ratio of registered voters in the district versus the town as a whole, per capita spending for the Bristol Police Department is probably closer to $300 — quite a bit higher than the Vermont average.
Bristol resident John Moyers also expressed concerns about the police budget being shouldered only by Police District taxpayers.
Still, he said, current circumstances provide great opportunities for the community and the police.
“We live in one of the safest states in the United States,” he said at the conclusion of the meeting. “We live in … one of the safest communities in Vermont. If we can’t reimagine policing, then nobody can… We have a police chief who seems really open minded to reimagining policing… I think we have a tremendous opportunity to be a model and to think big and to explore a lot of ideas that are out there about how policing can be re-shaped so that it’s not about just going after the bad guy, but that it’s really about public safety and service to the community, and binding the community together.”
Many meeting participants expressed an interest in holding further public discussions on the matter, so it is likely that a follow-up meeting will be scheduled in the future.
Reach Christopher Ross at christopherr@addisonindependent.com.