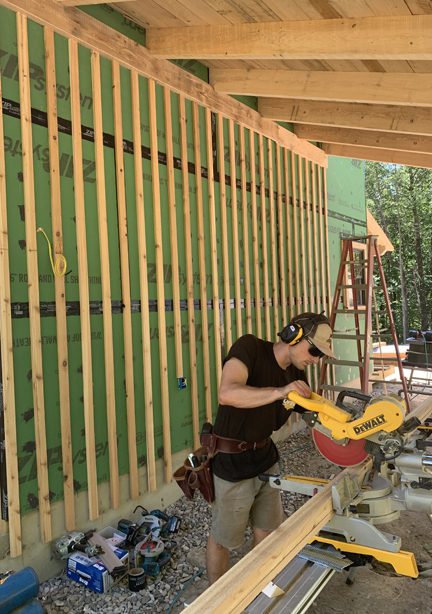 “Prices are an issue, but not a big issue. The issue is whether or not we can even get it.”
— Mark Thomas, Goodro Lumber

ADDISON COUNTY — Lumberyards and building contractors seem to have experienced a surge in business in Addison County since the stay-at-home mandate was loosened in June. And building supply stores can’t seem to keep up with demand for one product in particular — decking.
“It’s odd, there’s almost a guilty feeling to be in an industry that is thriving during this time. I’m really just grateful,” said Jed Malcom of Salamander Construction Inc. of Middlebury.
People who work with lumber retailing and construction during this summer of COVID-19 have varying observations on supply shortages and fluctuating wholesale prices.
LUMBERYARDS
Joe Miles, the president of rk Miles Inc., which has a lumberyard in Middlebury, said he expected his business to be in real trouble.
“We were running pretty tight until May, and then in June business just exploded,” Miles said.
Between April and June rk Miles saw a lot of its traffic from individuals looking to put in raised beds, paint their house and the like — what Miles called “consumer business,” separating it from professional contractors. But then business picked up.
Miles said that in general his business has been able to stock its shelves with everything it needs, except for one, once-plentiful product:
“The material we are short on is pressure treated lumber. Pressure treated lumber comes from southern yellow pines often grown in Georgia and surrounding states, and weathers really nicely making it great for building decks.”
Miles explained that the mills shut down during the quarantine and were hit with high demand the moment they opened — and they haven’t been able to catch up.
“Everyone is at home looking at their deck that needs fixing or imagining the deck they would like,” Miles said. “This is the cause for the high pressure to get this sort of lumber back on the market.”
There is almost always a steady supply of pressure treated wood, Miles said. But after the stay-at-home quarantine they went to order some of the material and were informed that a truck couldn’t be filled for them for another four weeks.
“Nowadays the truck pulls in and the supply goes right to taking care of back orders,” he said. When his staff members go to stock the shelves with whatever is left over, they often don’t have the dimensions they need to satisfy their inventory list.
Short supplies mean higher prices, something that Miles says is challenging to communicate to customers.
“Most people are understanding, but it’s tough when we’ve already given people quotes,” he said.
Mark Thomas, president of Goodro Lumber Company Inc. in East Middlebury, testified to this challenge as well.
“Unfortunately we are at the place where people don’t care as much about price, it’s just a matter of ‘do we have it?’” he said. “Prices are an issue, but not a big issue. The issue is whether or not we can even get it.”
Some contractors said they have seen some materials coming from Europe, which they figured was because the Canadian companies that normally supply U.S. markets can’t keep up with the current demand.
“The marketplace does a good job of sorting things out, but it takes time. Prices will come off we just have to be patient,” said Miles.
CONTRACTORS
Alex Carver of Northern Timbers Construction said that he was sure they were going to lose customers when the pandemic hit, but that his prediction did not come true at all.
“We’ve been crazy busy,” Carver said. “Other than the inconvenience of wearing a mask, cleaning tools and social distancing we were lucky to be allowed to resume working so early on in the summer.”
Carver said some customers have told him they are worried that the pandemic might get worse in the fall and projects would be delayed or put on hold. So they are trying to get work done this summer.
“I feel really, really fortunate,” said Carver about his experience of thriving business during a time of staggering unemployment rates. “I don’t know how to spread that other than sharing my appreciation for my family, friends and crew. I don’t necessarily feel guilty, just so grateful.”
Malcom of Salamander Construction was similarly grateful. He said he got a lot of calls during the initial shutdown.
“People sat at home and had time to plan projects. I got a lot of calls during the lockdown and did some virtual estimates and walk-throughs,” he said. “There was also an influx in out-of-state clients who either owned second homes here or were looking to transplant.”
Malcolm noticed the material shortages and was able to pre-purchase a number of products, something that he said he wouldn’t normally do, but felt compelled to do now.
In terms of working increased prices into pre-existing plans, Malcom said his clients are pretty understanding.
“When we create estimates there is always some cushion room for the market to change, or things to come up, but this has been much more extreme,” he said.
“The uptick has really been based around the residential market,” Malcom said. “I’m not sure if it is something particular to Addison County, or Vermont, or the entire country. I don’t think, that commercial building is thriving in the same way though.
“We minimized how much loss we had. Whether or not this all holds is hard to say. There is definitely some uncertainty.”