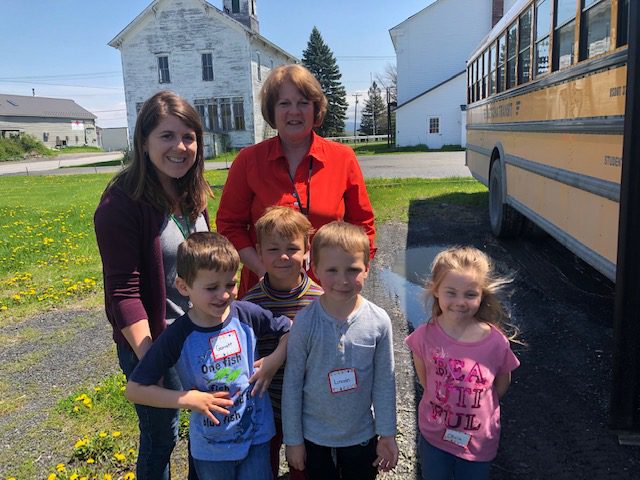 I just really love what I do, and I always tell my children that. You really just have to find what your love is. Even if that doesn’t pay really well, that’s really what you need to do.
— Sheryl Thurber

ADDISON — Longtime Addison Central School reading specialist Sheryl Thurber shares a background with many others who have chosen education as their careers.
There’s family tradition.
“There are a lot of teachers in the family,” said Thurber, 63, who is retiring this spring after 44 years as an Addison Northwest School District employee.
And parents who read to her.
“My mother was a teacher. She was a kindergarten teacher and read to us all the time,” said the longtime Bristol resident who grew up in Vergennes.
And a love of reading.
“We come from a long line of readers, so I was always a very avid reader,” said Thurber, who raised four children with husband Randy, a Panton native.
And after completing her Vergennes Union High School career, like so many Vermont teachers Thurber also attended Castleton State College.
But it wasn’t to become a teacher.
Thurber started out studying for a career in human services, but just didn’t see a fit. She dropped out and took a job in Vergennes with what was then a supervisory union. Her time was split: She assisted former special education administrator Gail Lynk, and worked as a paraeducator.
She held both positions, spending time in all four ANWSD schools as a paraeducator, for more than 20 years before following her true calling.
“I just really became much more interested in working with students in reading. So I took more courses and classwork and really enjoyed that part of it,” Thurber said.

1ST & 2ND DEGREES
Probably inevitably Thurber set her sights on becoming a full-time teacher.
“(I) loved what I did and was given plenty of opportunities, had a lot of professional development, and finally realized I had to get that degree in order to continue to do what I really wanted to do,” she said.
With a house full of children and a job, she knew it would be a challenge, but she enrolled in an offsite Johnson State College program.
“That was a little tricky, that last part with the bachelor’s,” Thurber said. “I would work and then take weekend courses and night courses.”
She got her degree in 2001 and started teaching at Addison, where she has been since. She eventually earned a master’s from the University of Vermont.
It went well. So well, in fact, that in 2005 the Vermont Council of Reading honored her with an award at a statewide ceremony for “contributions to reading.” She had been nominated by colleagues Rita Smith and Jane Nimblett.
“It’s always nice to be recognized like that,” Thurber said. “Vermont has a lot of really positive people who know a lot about reading, and really in general in education know what they’re doing and really go after it … So that was really rewarding.”

TEACHING YEARS
She happily settled into Addison Central, which she calls “a special place,” with collaborative teachers and supportive principals.
“I’ve really found my niche with reading,” Thurber said. “I just really love what I do, and I always tell my children that. You really just have to find what your love is. Even if that doesn’t pay really well, that’s really what you need to do.”
Seeing students blossom as they tackle reading is probably the best part of the job, she said, including “just seeing I make a difference” in their lives.
“Sometimes you don’t see that for some years. Some years I’ve had students that I’ve worked with way in the past come up and say, ‘Thank you so much. You really helped me learn to read,’” Thurber said. “I just think reading is such a foundation of so many things. If you can read it just opens the door for so many things.”
Then there is just simply seeing the moments of mastery, often after students have had to plug away at it. People don’t always understand reading isn’t a “natural-born” skill, she said.
“I always tell people you’re not born a reader,” Thurber said. “No. As long as you can work hard at something you can achieve that, and I don’t think they always believe that… You have to be persistent. If you really persevere at something it can happen.”
Certainly, over 44 years Thurber has seen changes, some of which she appreciates more than others.
“Especially in reading there’s always that pendulum swing. So I started out very much whole language, and then we got into more balanced literacy, and now we’re shifting into more phonics, which I don’t know that I agree with,” she said. “You’ve got to have a balance. If you focus too much on one area, other areas will go by the wayside.”
Mostly she sees positives. She cited the greater voice teachers have in how schools are run, emphases on both personalized and social-emotional learning, higher expectations for students, and especially increased collaboration among teachers.
“People were in their own room, and didn’t really talk, and then it went way into the collaborative, which has been something really wonderful,” Thurber said. “I don’t think you can do it on your own. Because there’s just so much demand, increased demand in every area, that teachers have to teach. So I think the collaboration has been really helpful.”

LOOKING AHEAD
Thurber’s decision to retire did not come easily. She said her original plan was to work another year, but Addison Central will cease to be an elementary school in the fall, meaning a new workplace, and the district offered a new retirement plan in April.
And she believes the pandemic means at least some education will be back online during the next school year, something that she said went well at her school, but that she did not find ideal personally.
“I think that was really a large part of it, the closing of the Addison school, and this whole COVID-19 thing. This type of teaching is tough, and I’m right in the middle of it in the fall, and who knows what it will look like? I think that was really like the last straw,” Thurber said.
She will still work with students, possibly as a mentor in the Mount Abraham district.
“I’m hoping to take a breather, a little breath, and then look into some different opportunities. And once things with this COVID-19 get kind of settled I’m certainly going to want to volunteer. I think I’m going to have to be involved with kids in some way,” she said.
And then there’s gardening; reading, especially history; and, if the pandemic allows, spending time with her four grandchildren, two boys and two girls.
“I’m hoping,” Thurber said. “It’s been hard not seeing them as much.”