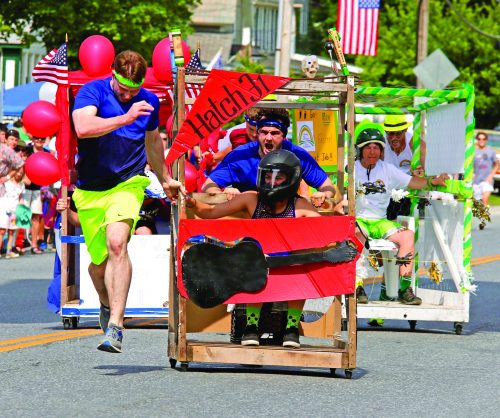 We’ve been inundated with people begging us to hold a celebration because everybody else has shut down. People really want to do something in the way of celebration.
— Ted Lylis, Bristol Fourth of July Committee

ADDISON COUNTY & BRANDON — In Vergennes, the city council on Tuesday made it official there will be no Vergennes Day for the first time since the event was founded decades ago. Organizers of July’s multi-day Basin Bluegrass Festival in Brandon have cancelled the event for the first time ever.
Late Wednesday evening the Bristol Fourth of July Committee was due to make a final decision whether to hold the town’s legendary Independence Day parade and outhouse races this year. And it didn’t look good.
Around the region many signature summer events are being cancelled this week to keep the public safe from the coronavirus.
“Let’s pull the plug this year and try to do something special next year,” City Councilor Lowell Bertrand summed up when municipal leaders made the decision on Vergennes Day, which would have been the 39th consecutive celebration of the Little City had it been held at the end of August.
Though decisions about Vergennes Day, Fourth of July celebrations and the like will ultimately be left up to towns, restrictions on events and social gatherings would make it virtually impossible to hold a large-scale parade or a gathering of hundreds of people on a city green.
Gov. Phil Scott announced on Friday that fairs and festivals in Vermont are canceled until further notice, and social gatherings in Vermont are still limited to 10 or fewer people. Even if that number is increased somewhat during the summer it will fall well short of the thousands of people who attend Addison County’s biggest summer events each year.
The Bocce Tournament staged by the Counseling Service of Addison County every August was canceled this week. So was ACORN’s Sept. 19 Tour de Farms, which draws many out-of-staters to bike from farm to farm tasting locally produced goodies.
Vergennes Day typically draws thousands of visitors to vendors on the city green, to the rubber ducky race in the Otter Creek basin area, to the Bixby Library and Vergennes Opera House, and events at Vergennes Union High School.
It includes concerts, a 5-kilometer road race, a Lions’ Club chicken barbecue, and several concerts.
It also requires a public assembly permit issued by the Vergennes City Council, and on Tuesday the council declined to issue one.
Councilors did so despite a suggestion from event organizer Rob Carter of the Addison County Chamber of Commerce of a scaled-back Vergennes Day.
Carter said a limited number of non-food vendors could be scattered around downtown, merchants and restaurants could still offer sales and specials, and other “open events” could be staged within social-distancing parameters in place by August. He added some events, such as a fire department pancake breakfast, could be staged with timed tickets only.
“It would encourage people to attend, but without some events that would draw a large crowd,” Carter said. “It’s just a way to draw people to the city, but without them crowding into a large area.”
But councilors were skeptical that the flow of people could be controlled, especially if demand was high if other summer events were been called off.
Councilor Lynn Donnelly said the only venue large enough to space out events is the high school, and people would not walk from there to city businesses, thus limiting the day’s value to Vergennes retailers.
“It would be wasting Rob’s time,” Donnelly said.
Councilor Bill Benton agreed, saying the chamber should instead continue to focus its efforts to promote business in the city and elsewhere in the county.
“I just don’t see how a Vergennes Day Lite is going to be that successful,” Benton said. “I think your resources are better spent elsewhere this year.”

BRISTOL’S FOURTH
The Bristol Fourth of July Committee still plans to dress up the town for Independence Day, but the annual parade is almost certainly off because of the COVID-19 pandemic.
The committee planned to discuss the matter Wednesday evening — after press time — and committee member Ted Lylis told the Bristol selectboard Tuesday night that “the governor took care of our parade. Evidently there is not going to be a parade.”
Lylis said there was plenty of demand for a parade.
“We’ve been inundated with people begging us to hold a celebration because everybody else has shut down,” he told the selectboard. “People really want to do something in the way of celebration.”
Warren canceled its Fourth of July parade and the town of Brattleboro announced this week that its annual parade and related festivities would be transitioned to online and television formats.
The Bristol committee also planned to discuss the July 3 fireworks event on Wednesday night, Lylis said.
“The fireworks are fairly expensive — really expensive — but they’re a really important part of the celebration in the mind of many of us on the committee,” he said. “As far as social distancing and the rest we have to discuss that as well.”
At least one Independence Day tradition will go forward in Bristol this year: the chicken barbecue, which is a fundraiser for the Fourth of July Committee.
“What we’re going to do is takeout at the (American) Legion on June 27, so that it will work the same way as restaurants (offering curbside service) have been working,” Lylis said. “One of the differences is that we will only be selling half-chickens — we won’t be selling any quarter-chickens.”
Regardless of events and activities this year, Bristol will get decked out for the Fourth, Lylis said.
“We are going to decorate for the Fourth of July as we always have, with the flag on the cranes, the buntings and those flags that look like jib sails that appear on the side of the road.”
UPDATE: The Bristol committee on Friday announced that it had officially cancelled the parade and fireworks. See the story here.

NO MUSIC IN BRANDON
Basin Bluegrass Festival Founder and organizer Linda Berry said Tuesday that she waited as long as she could to make a decision about this year’s festival in the face of the COVID-19 pandemic.
“The governor said fairs and festivals are cancelled this year, so that’s it,” she said. “It’s the first time ever in 26 years that we’ve cancelled.”
The festival is held annually over the second weekend in July at the top of Basin Road off McConnell Road in Brandon. Hundreds of Bluegrass music fans drive from all over the region and the country to park their RVs and listen to live music on a plateau against the backdrop of the Green Mountains. Tickets are often bought months in advance and Berry sets the line up for each year’s festival more than a year in advance.
“Due to circumstances beyond my control, I have had to cancel this year’s festival,” Berry wrote on the homepage for the festival website, basinbluegrassfestival.com. “If you have advance tickets and have not heard from me already, please email me at basinbluegrass@yahoo.com or call 802-247-3275.”
This year there were 11 acts slated to perform. Berry said none of them pulled out before she cancelled the festival.
And those acts booked for 2021? All set.
As for ticket holders for this year’s festival, Berry is offering refunds, but also a chance to apply this year’s tickets to next year’s festival.
“A few people even said to keep the money and insisted they would buy tickets for next year, which was nice,” she said. “Most people are saying to hold their tickets for next year.”