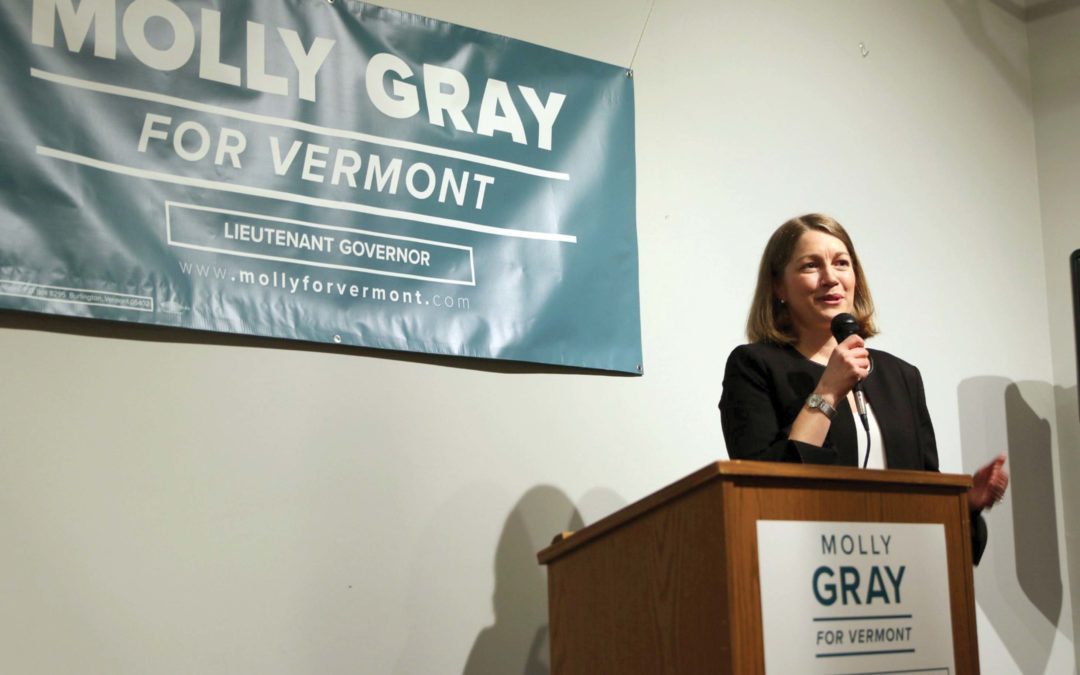 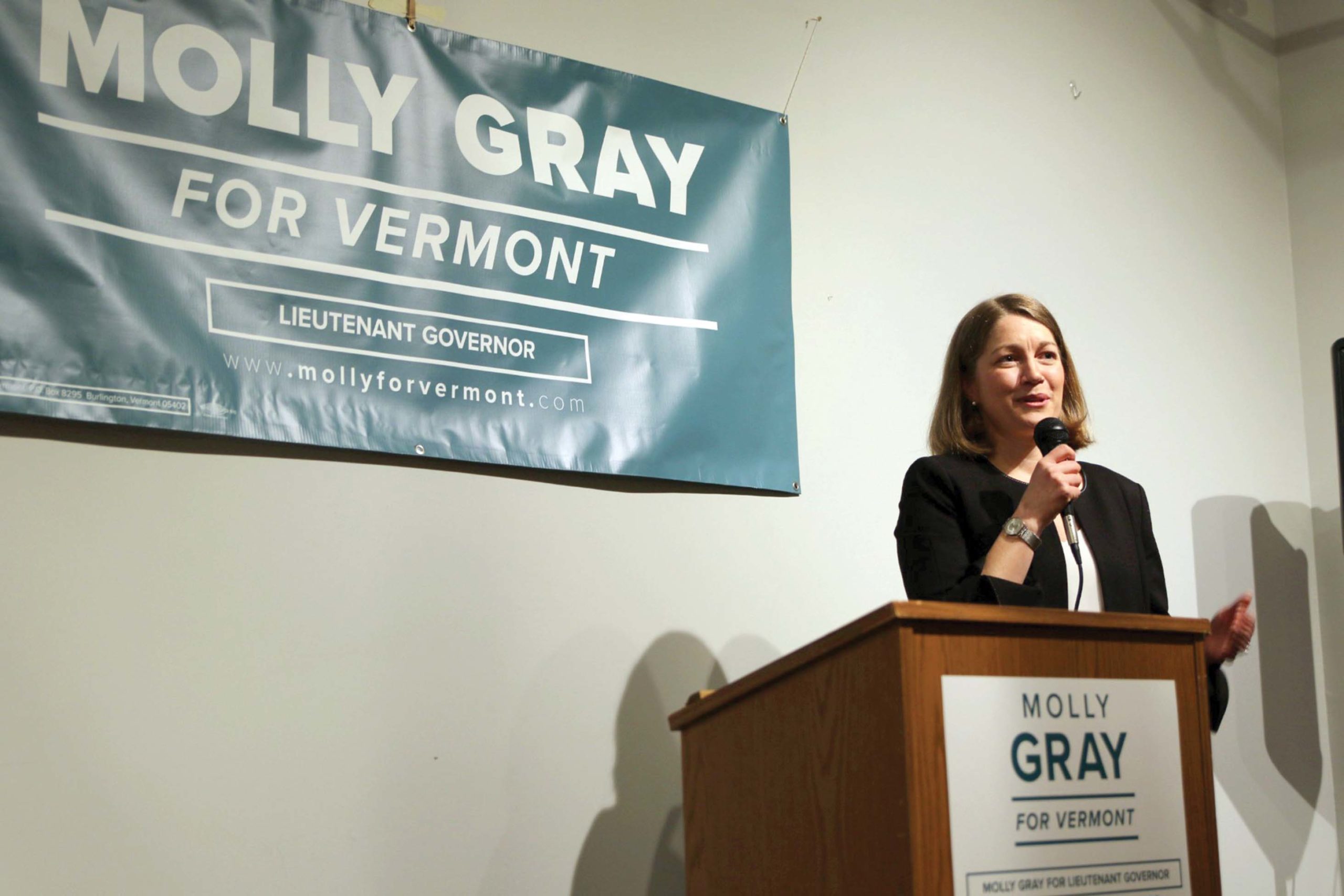 MOLLY GRAY ANNOUNCED her candidacy at a kickoff rally at Queen City Brewery in Burlington and launched her campaign with a full day tour from Bradford to Burlington on Feb. 27.
By Lee J. Kahrs

This is an opportunity for Vermonters to take an active role in shaping their communities and the future of the state as we look beyond COVID-19. I want to be a partner for Vermonters in that process and to elevate their voices.
— Molly Gray

BURLINGTON — The global pandemic hasn’t changed the issues Molly Gray is running on in her campaign for lieutenant governor, just amplified them.
Gray, 36, an assistant attorney general for the state of Vermont, announced her candidacy in February. She spoke with The Brandon Reporter earlier this month about those issues. Her platform has been focused on supporting rural communities and improving broadband internet access, supporting families and making Vermont a more affordable and attractive place to live for younger generations
“If we’re going to keep people in Vermont, we have to identify and commit to the constellation of opportunities that make Vermont a safe, equitable and prosperous place to live,” Gray said. “We are putting a laser focus on what is essential right now, access to broadband, health care and education.”
“My heart is with our rural communities and when I think about what we’re facing now, in some ways, sure, there are new issues, but the pandemic is amplifying the challenges we’ve already known.”

BACKGROUND
Gray, a Democrat, grew up on a working farm in Newbury that her family still owns and operates. She attended the University of Vermont on an athletic scholarship as a Nordic ski racer. After graduation, she worked on the campaign to elect Congressman Peter Welch and moved to Washington, D.C. She then worked as a congressional aide to Welch’s office. Gray also has experience working internationally on humanitarian issues with the International Committee of the Red Cross. From 2008-2011, she led field missions to Haiti, Uganda, Georgia, the Western Balkans and the Democratic Republic of the Congo.
Gray then returned to Vermont to attend Vermont Law School and to be closer to family. After earning her law degree, Gray served as a law clerk in Rutland to Judge Peter W. Hall in the Second Circuit Court of Appeals.
Gray was also recruited in 2015 to support the U.S. government and the international community in launching the International Code of Conduct Association, a global initiative created to oversee the human rights compliance of private security contractors. Gray worked to launch the association’s human rights program and led human rights monitoring missions in East Africa, Nigeria and Iraq.
She specializes in laws of war, the Geneva Convention and humanitarian responses. Gray also teaches night classes at Vermont Law School on human rights.
The candidate said she has also consulted with former governors Madeline Kunin and Peter Shumlin, as well as former Lt Gov. Doug Racine. Gray has never held elected office, but said she does not believe that should negatively affect her candidacy. If anything, Gray said she believes it serves her.
“Right now, we don’t need more Montpelier in Montpelier,” she said. “We need more Vermont in Montpelier. I bring more than a decade of experience as a lawyer, as an advocate for human rights and the rights of the most vulnerable, as a leader and collaborator to statewide office. I’m used to putting people before politics, and Vermonters should expect that from me as Vermont’s future lieutenant governor.”

BROADBAND
“We know now more than ever that our lack of access to broadband is a lack of access to education, telemedicine and information and it’s creating a disparity across the state,” Gray said.
In her hometown of Newbury, 30% of kids don’t have access to broadband, a point driven home by the “Stay Home, Stay Safe” guidelines that closed schools for the year and ushered in the new world of distance learning.
But it’s bigger than education, Gray said. It’s something that affects society as a whole.
“Lack of broadband has become an equity issue,” she said. “It needs to be thought of as a utility like heat, electricity and water.”
Gray proposes the formation of Community Utility Districts, or CUDs, like EC Fiber in Royalton. These CUDs would invest in expanding broadband access.
“It’s time to listen to businesses and understand what’s working and put more money behind developing these districts the same way,” she said. “The is an economic and equity issue. I decided to run because we’ve heard Gov. Scott talk about Vermont’s demographic problems, but we haven’t had someone in Montpelier who has addressed this.”

PAID FAMILY LEAVE
The ability of Vermonters to care for family members who are ill and still pay their bills, is an issue close to Gray, who says it is a cross-generational problem that affects thousands of people, and the future of Vermont.
“How do we keep a generation here?” she asked. “From infants to elders, we have to make Vermont more viable. Twenty percent are over the age of 65. So many Vermonters want to be able to age in place and also to have kids of their own. Without paid family leave and paid medical leave, we have to choose between our own economic security and taking care of family.”
Gray said she was staring at the same potential situation last spring, having to make the choice between caring for a loved one and taking unpaid leave from her job.
“I still have student loan payments and housing payments,” she said. ‘It would’ve created a economic challenge for me.”
Gray endorses not only paid family leave but also expanding high-quality childcare in the state to build economic development on several levels.
“Providing paid family leave and high-quality childcare can become an economic driver for the state by providing benefits that will employ and draw people in to Vermont and in turn will broaden our tax base to allow us to fund programming for a sustainable future in Vermont,” she said.
The candidate said she was disappointed with how the proposed paid family leave bill was handled during the last legislative session.
“The president pro tem (Tim Ashe) had the bill on his desk and didn’t sign it,” Gray said. “Then they had to wait until this session to bring it up again. Vermonters did not have the time or opportunity to weigh in on that bill. I personally don’t believe enough people were consulted on the lack of paid family leave before the bill was brought up before the veto.”
Gray said it’s her goal to listen to Vermonters and bring their concerns to the Statehouse.
“If I’m elected, I will work with communities across the state to listen and better understand their needs, to amplify their voices in the legislative process,” she said. “Vermonters expect their legislators to work together and to fight for their needs and their future. We need thoughtful, reliable, reassuring leaders who work collaboratively.”

JOBS & WORKFORCE DEVELOPMENT
Another way Gray would like to retain the younger generations in the state is workforce development, expanding training and educational opportunities in nursing, education and the trades.
“I think there is an opportunity for us to build a new pipeline from classroom to community, working to make sure we have those jobs and services provided to our communities in the state,” she said. “If we can incentivize that pipeline, we can incentivize a generation home.”
Gray would like to see employers helping employees pay down student loan debt, which she said is having a ripple effect on Vermont’s future.
“It’s impacting the ability to buy a home, care for parents, have children,” she said. “It may be an opportunity to work with employers to contribute to a student loan program instead of a pension.”
The whole goal is to broaden the tax base, Gray said, adding that the pandemic has signaled a shift in Vermont’s future.
“This is an opportunity for Vermonters to take an active role in shaping their communities and the future of the state as we look beyond COVID-19,” she said. “I want to be a partner for Vermonters in that process and to elevate their voices.”

PANDEMIC LESSONS
Gray is keenly focused on other issue facing Vermonters, including food insecurity and climate change, which she said the pandemic has also amplified.
“From dairy farms to all vegetable and food producers, we need to support them and strengthen the pipelines from farm to table,” Gray said. “We know that in the face of climate change and we know that in the face of the pandemic. We care for each other, we care for our neighbors and we care for our communities.”
Gray highlighted climate change, saying it may not seem like a priority right now, but it should be, as there are economic development opportunities there as well.
“We still have to work for an energy efficient future,” she said. “We need to prioritize renewable energy and incentivize jobs in weatherization and solar. We need leaders in statewide office who recognize that is part of what’s driving a demographic shift in Vermont and makes us viable.”
Gray said the COVID-19 pandemic is only highlighting the issues she has been running on for months now, and she is hopeful that in the Primary late this summer and then in November’s General Election, Vermonters will see clear to electing her as the next lieutenant governor.
“There will be an opportunity to listen and capture lessons from this pandemic,” she said. “We’re hearing evidence as people navigate elder care, family care and work and pay the bills. What I want Vermonters to know is that in me, they have a trusted reliable, thoughtful and collaborative leader whose roots run deep in rural Vermont, and whose statewide and global experience will help take Vermont forward.”