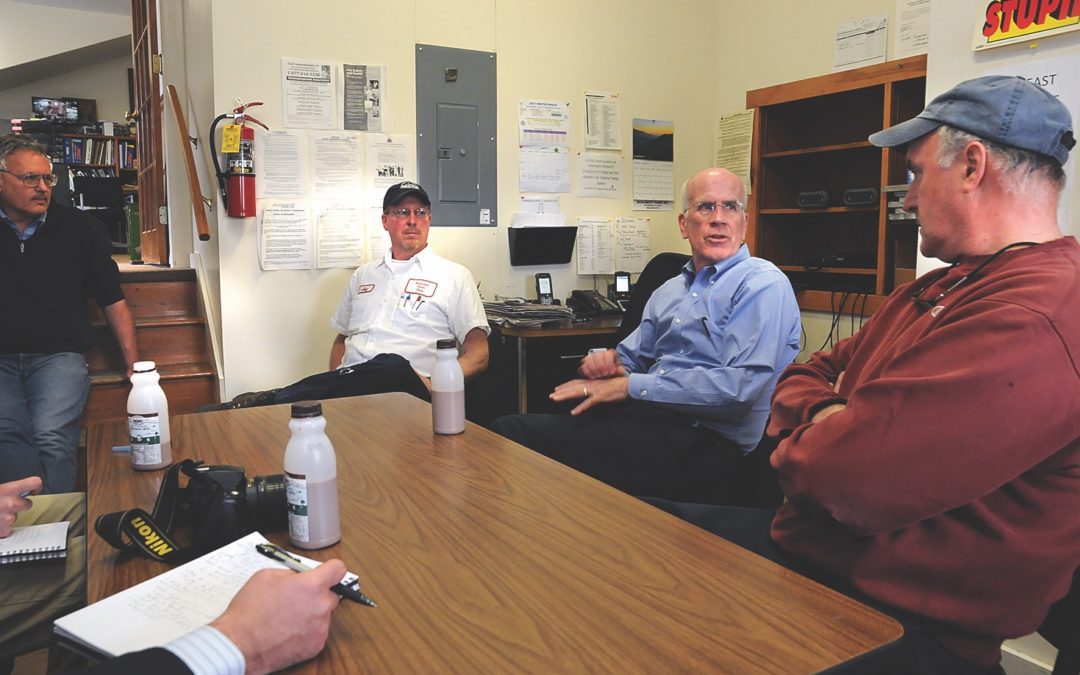 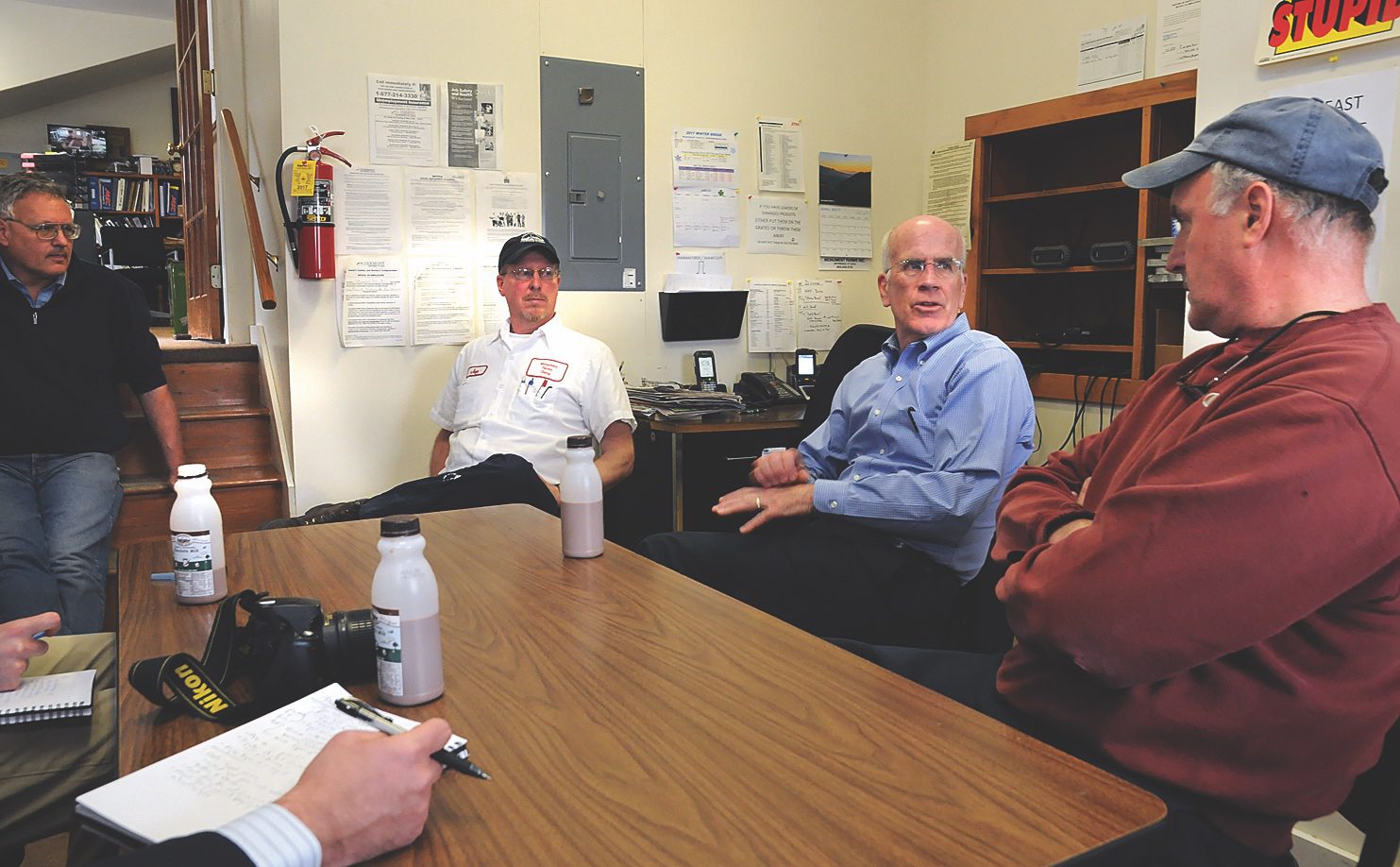 CONGRESSMAN PETER WELCH, shown talking with some Addison County farmers a few years back, acknowledged that the federal stimulus package to help businesses through the coronavirus recession will not do enough for dairy operations. He said Congress is working on providing more help.
By Christopher Ross

“Frankly, I pray that I’m very, very wrong, but unfortunately at this point in time ... those (wholesale milk) prices are still going to fall.”
— Agri-Mark Senior Economist Catherine de Ronde

VERMONT — While saluting the work of Vermont dairy famers, Congressman Peter Welch said that Washington hasn’t yet pulled together the economic support they need to weather the economic downturn brought on by the coronavirus pandemic.
“Farmers need cash now,” the Vermont Democrat said during a statewide conference call Thursday afternoon. “We’ve literally closed down the economy as a result of the public health crisis, and the mechanisms that we are using in an effort to (put money in their pockets) are, I think, really insufficient.”
As a result of the economic dislocation demand for milk from restaurants and other commercial establishments has plummeted, resulting in some farmers dumping their milk rather than send it for processing. An economists said the price farmers receive for their milk has plummeted well below the cost of production and likely will go lower, possibly driving dairies out of business.
The almost total shutdown of the food-service industry nationwide has eliminated a huge and important market for dairy producers.
Agri-Mark Senior Economist Catherine de Ronde, who participated in the call, did not have much good news to share.
“If I look at the futures markets and run some numbers and look at what the average 2020 forecast is, I have us at $15.50,” she said, referring to the price per hundredweight (cwt), which is a little more than 11 gallons of milk. “This has fallen about 20% since the start of the year, 10% in the last three weeks alone,” she continued.
“Frankly, I pray that I’m very, very wrong, but unfortunately at this point in time … those prices are still going to fall.”
De Ronde said it was possible milk prices could dip below $13/cwt by summer. For most conventional dairy farmers the break-even price for selling their milk is $18-$19.
“For the average Vermont farm ($13/cwt) equates to about an annual revenue loss of $175,000,” she said. “If we do not take substantial action, we’re going to be facing a rapid loss of dairy farms, and we’re really jeopardizing the security of our local food systems and of our rural communities.”
At the moment, however, “substantial action” in Washington does not appear to be on the horizon.
Welch outlined avenues of support that are available for dairy farmers right now, as a result of the $2.2 trillion Coronavirus Aid, Relief and Economic (CARES) Act that was signed into law on March 27. But he also recognized the limitations of these programs.
• The Payroll Protection Program (PPP) provides loans of up to 250% of monthly payroll, which can be used to pay workers and take care of other farm expenses. But Welch questioned whether or not this would “provide any significant relief to the farm community.” And getting help through that program has proven challenging for some Vermont farmers, according to Vermont Secretary of Agriculture Anson Tebbetts, who pointed out that lenders are advising farmers who employ H2A-visa workers (such as apple pickers from Jamaica) that they are not allowed to count H2A wages in their applications.
• Farm workers and farmers working as sole proprietors may also apply for unemployment benefits, which the federal government has increased by $600 per week. “That helps individuals but it’s not something particularly helpful to the farms,” Welch said.
• Many farmers and their family members may also be eligible for the stimulus checks that are forthcoming from the U.S. Treasury: up to $1,200 per adult and $500 per child.
• The CARES Act also sets aside $9.5 billion that the U.S. Secretary of Agriculture can use to support food producers impacted by the coronavirus pandemic. This includes producers of all kinds, however, not just dairy, and if divided equally among American farms would amount to less than $5,000 per operation.
• The Commodity Credit Corporation may use $14 billion for trade-mitigation support. It wasn’t clear how helpful this would be to Vermont’s Dairy Farmers.
• The Economic Injury Disaster Loan program may provide loans of up to $10,000 to small businesses. But at the moment, because a 20-year-old statute prevents the Small Business Administration from providing any direct assistance to the farm community, farmers are not eligible for these loans, Welch said, though he said that efforts are underway in Washington to change that.
Tebbetts, de Ronde and others on the call advocated for stronger economic support for dairy farmers, including an immediate payment of $3/cwt for three months’ production (or $9/cwt), and the establishment of a four-month floor on milk prices — $19.50/cwt for conventional producers and $35/cwt for organic producers — to at least cover the cost of production.

ORGANIC DAIRY OPERATIONS
Despite some bright spots in the organic milk business — some say demand is rising because of the health benefits of organic foods — the organic milk market is also starting to see some problems, according to Kyle Thygesen of the Northeast Organic Dairy Producers Alliance.
“Currently there is no dumping in place with regard to organic milk, but I am concerned that that may shift over the next three to six weeks, depending on what supplies do and how buying habits change, potentially, at the grocery store level,” he said.
Welch promised that he and his Congressional colleagues would continue working to increase support for Vermont dairy.
“I gotta say, God bless the farmers,” he said near the end of the call. “It’s just an unbelievable challenge with what has happened with this collapse in market demand as a result of this virus… This is about our local communities, our food sources and nutrition, and we can’t have as an outcome of this pandemic the collapse of our local rural farm economy.”
Reach Christopher Ross at christopherr@addisonindependent.com.