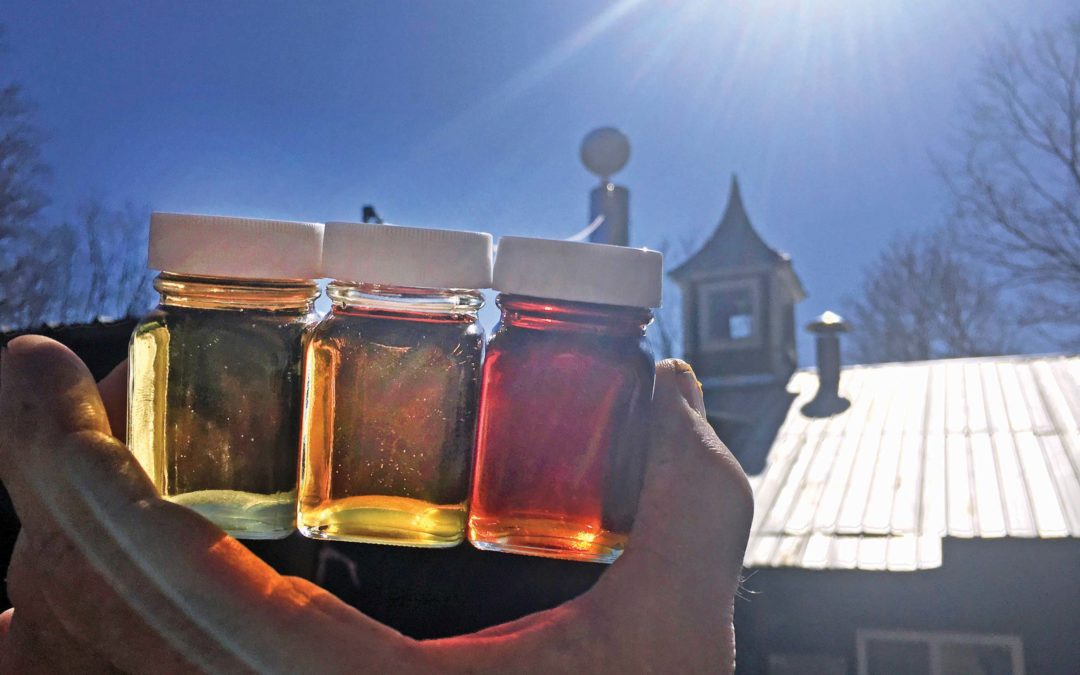 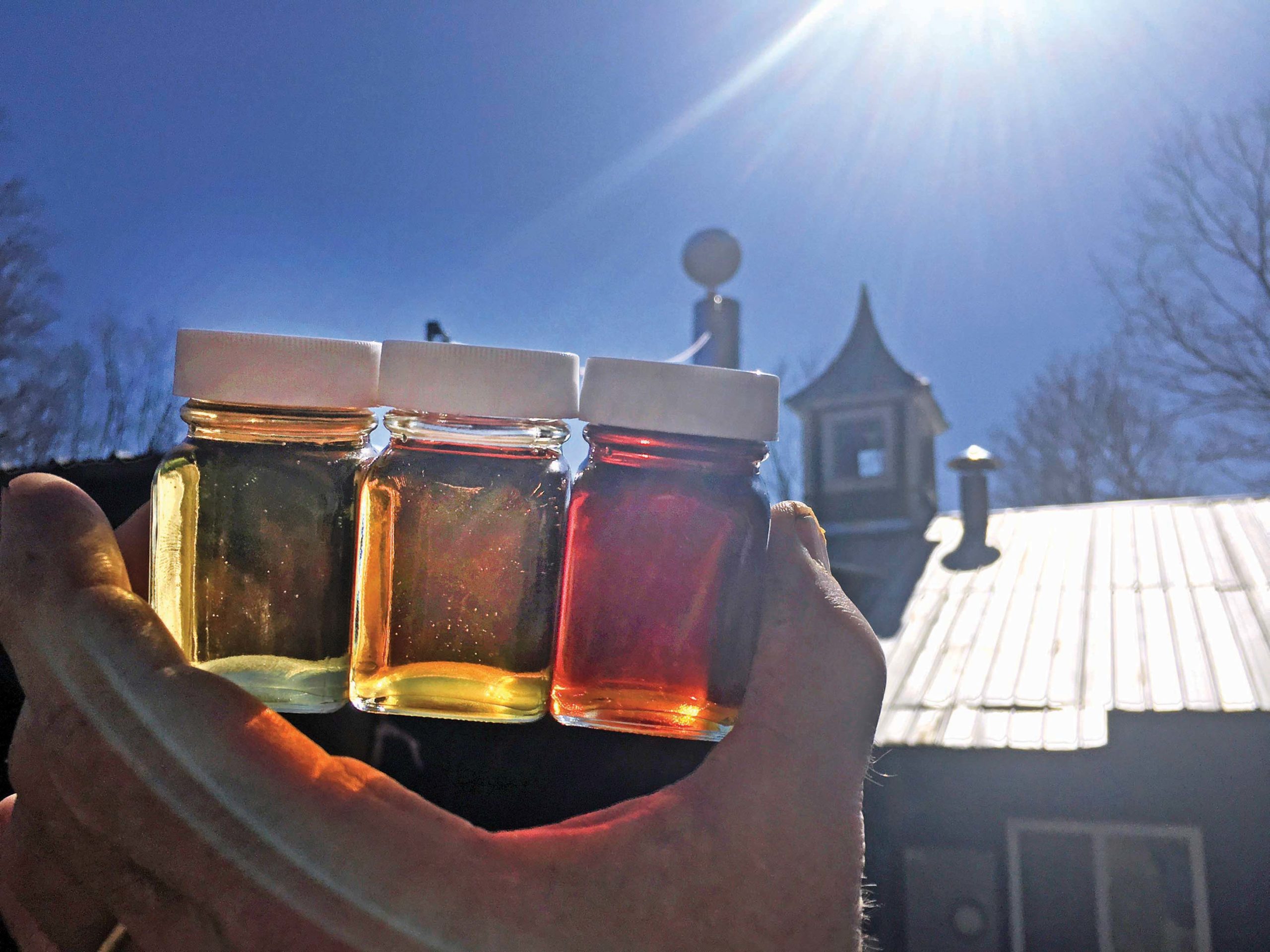 DAVE FOLINO OF Hillsboro Sugarworks in Starksboro compares maple syrup grades with the help of a little early spring sunshine. The Folinos had a better-than-average sugaring season in 2020. Photo by Dave Folino
By Christopher Ross

We’re washing things constantly. I joke that 90% of sugaring is cleaning stuff anyway, but this year we’ve overemphasized that.
— Bill Heffernan

ADDISON COUNTY — Vermont has had a pretty decent maple season this year, all things considered, but it hasn’t been without its quirks and stresses.
One issue a lot of local sugarmakers saw this spring had absolutely nothing to do with the unfolding public health crisis.
“We’re getting more raw sap but less syrup,” said Judy Gale of Twin Maples Sugarworks in Lincoln. “The sugar content is lower.”
It’s an issue some of their fellow sugarmakers have also experienced, she said.
“We’re not sure why it’s happening.”
Twin Maples typically produces about 1,700 gallons of syrup from 5,000 taps every year, but as of Monday they had produced only 1,400 gallons. But they’re hoping that at their higher elevation they’ll get another week or so out of the season.
“It’s been more work, more boiling,” said Judy’s husband, Don Gale. “Usually the sap-syrup ratio is 45 to 1. This year it’s been 60 to 1.”
The sap at Twin Maples is typically on the sweeter side, he explained.
“Usually it’s around 2.4%, but this year it’s been 1.9 to 2.0%.”
Still, he said, “we were pretty lucky.”
Down the mountain a little ways from the Gales, Hillsboro Sugarworks in Starksboro is having a “very good year,” said Dave Folino:
“We’re searching for barrels to put syrup in, which is a good problem to have.”
As the season winds down, Folino predicted that Hillsboro’s 15,000 taps will have produced about 15% more syrup than usual.
Hillsboro had slightly above average sap volumes and slightly below average sugar content, which was still within their normal range, he said.
“Our sugar content is usually pretty lousy, though, so we had a pretty good year,” he added with a laugh.
And the weather has been unusually cooperative. For three or four weeks in a row, the temperatures dipped so low at just the right time that the Folinos were actually able to take some time off on the weekends.
Over at the Heffernan Family Sugarworks in Starksboro, the operation’s 45,000 taps produced an average maple syrup season.
“We usually shoot for a half-gallon of syrup per tap, and we’re right there,” said Bill Heffernan. “We hit our mark on Monday.”
The Heffernans’ sugar content was a little lower than normal, but not as low as some of the operations at lower elevations, he said.
But, he added, “we’ve had some really good runs this year.”

SUGAR CONTENT
A lot of environmental factors can affect maple sap’s sugar content, and there’s no clear-cut way for determining why one season might be sweeter than another, said Mark Isselhardt, a Maple Specialist at UVM Extension.
Last year a lot of sugarmakers reported sweeter than usual sap, which could be having an effect on expectations for 2020.
Overall, though, Isselhardt isn’t seeing this year’s lower sugar content as a statewide trend.
Of the 12 Vermont producers who participate on Isselhardt’s weekly blog, the Vermont Maple Bulletin (vermontmaplebulletin.wordpress.com), one half reported having an average season, one quarter reported lower sugar content and one quarter reported sweeter sap.
“Industry-wide, I don’t think we’re seeing low sugar content,” he said.

SUGARING IN A PANDEMIC
The Heffernan operation is following strict social-distancing guidelines — 6 to 10 feet — and nobody is allowed in the sugarhouse but employees.
“And we’re washing things constantly,” Heffernan said. “I joke that 90% of sugaring is cleaning stuff anyway, but this year we’ve overemphasized that.”
Things at Hillsboro feel relatively unchanged by the state’s “Stay Home, Stay Safe” policies, said Dave Folino.
“Our schedule and life aren’t that much different these days. We’re pretty isolated anyway.”
The Folinos are counting their blessings, he said.
“We’re really grateful to be able to work in a place that’s healthy. We like to make a lot of syrup, of course, but we know we’re very lucky.”
Maple open houses and other events have been canceled this year because of the pandemic, which has taken some of the fun out of the season.
The Vermont Maple Festival, which was to have been held in St. Albans on April 24–26, was also canceled this year.

FRAGILE MARKET
While online and direct-to-consumer sales have been “robust,” Isselhardt said, they haven’t been able to make up for the nearly 100% loss in food-service sales, as restaurants and cafeterias have been forced to shut their doors during the pandemic.
“People who are dependent on farm-gate sales or restaurant sales as a big part of their market are hurting,” Isselhardt said. “Whether or not they’re able to find other markets quickly will dictate how well they do.”
In terms of the pandemic’s overall effect on the maple industry, “it’s too early to tell,” he said.
Now that Vermont school children don’t have to rush off to school in the mornings, perhaps there will be more pancake and waffle breakfasts — with lots of syrup, said Don Gale hopefully.
Asked for a parting message to our readers, Heffernan kept it simple:
“Eat and drink syrup.”
Then he paused for a moment.
“Eat and drink dairy, too.”
Reach Christopher Ross at christopherr@addisonindependent.com.