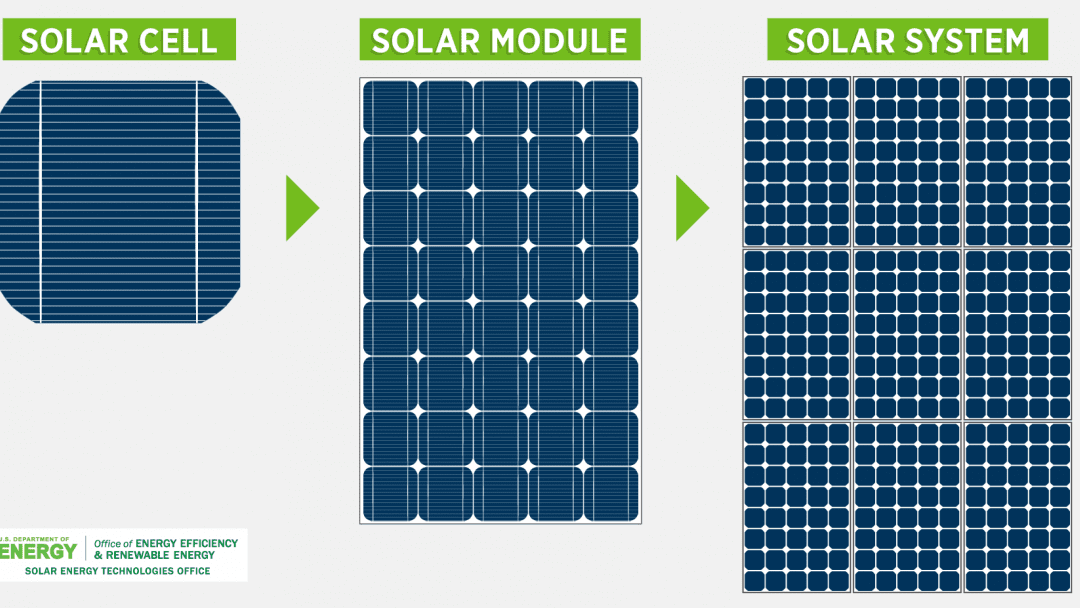 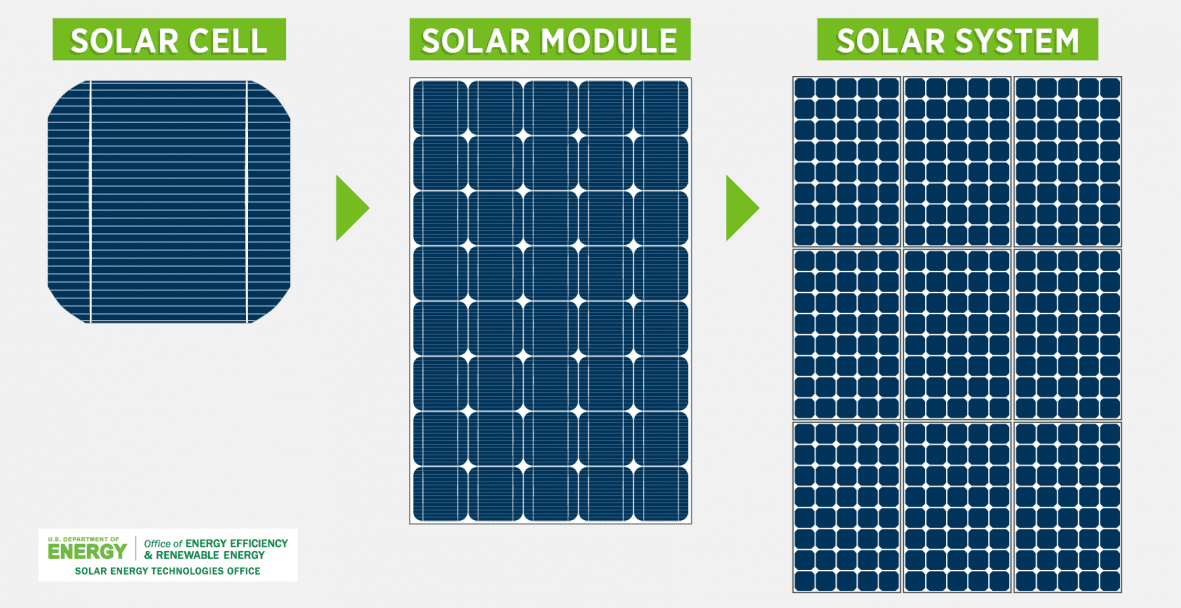 A GROUP OF solar cells are strung together to make a module, and then a group of modules are connected to make a solar system that is ready for installation. A typical residential rooftop solar system has about 30 modules.

You’ve seen them on rooftops, in fields, along roadsides, and you’ll be seeing more of them: Solar photovoltaic (PV) installations are on the rise across the country — but how do they turn sunshine into energy? Simple answer: with semiconductors. Of course, there’s more to it.
Understanding how solar cells work is the foundation for understanding the research and development projects funded by the U.S. Department of Energy’s Solar Energy Technologies Office (SETO) to advance PV technologies. PV has made rapid progress in the past 20 years, yielding better efficiency, improved durability, and lower costs.
But before we explain how solar cells work, know that solar cells that are strung together make a module, and when modules are connected, they make a solar system, or installation. A typical residential rooftop solar system has about 30 modules.

HOW A SOLAR CELL WORKS
Solar cells contain a material that conducts electricity only when energy is provided — by sunlight, in this case. This material is called a semiconductor; the “semi” means its electrical conductivity is less than that of a metal but more than an insulator’s. When the semiconductor is exposed to sunlight, it absorbs the light, transferring the energy to negatively charged particles called electrons. The electrons flow through the semiconductor as electrical current, because other layers of the PV cell are designed to extract the current from the semiconductor. Then the current flows through metal contacts — the grid-like lines on a solar cell — before it travels to an inverter.
The inverter converts the direct current (DC) to an alternating current (AC), which flows into the electric grid and, eventually, connects to the circuit that is your home’s electrical system. As long as sunlight continues to reach the module and the circuit is connected, electricity will continue to be generated.
A module’s ability to convert sunlight into electricity depends on the semiconductor. In the lab, this ability is called photovoltaic conversion efficiency. Outside, environmental conditions like heat, dirt and shade can reduce conversion efficiency, along with other factors. But researchers are coming up with solutions, such as backsheets that are placed on the panels to reduce their operating temperature, and new cell designs that capture more light.
Capturing more light during the day increases energy yield, or the electricity output of a PV system over time. To boost energy yield, researchers and manufacturers are looking at bifacial solar cells, which are double-sided to capture light on both sides of a silicon solar module — they capture light reflected off the ground or roof where the panels are installed. The jury is still out on how bifacials will affect a system’s energy yield, but some research projects are working to reduce this uncertainty by establishing baseline metrics to quantify and model bifacial efficiency gains.

SILICON: THE MARKET LEADER
The main semiconductor used in solar cells, not to mention most electronics, is silicon, an abundant element. In fact, it’s found in sand, so it’s inexpensive, but it needs to be refined in a chemical process before it can be turned into crystalline silicon and conduct electricity.
To make a silicon solar cell, blocks of crystalline silicon are cut into very thin wafers. The wafer is processed on both sides to separate the electrical charges and form a diode, a device that allows current to flow in only one direction. The diode is sandwiched between metal contacts to let the electrical current easily flow out of the cell.
About 95% of solar panels on the market today use either monocrystalline silicon or polycrystalline silicon as the semiconductor. Monocrystalline silicon wafers are made up of one crystal structure, and polycrystalline silicon is made up of lots of different crystals. Monocrystalline panels are more efficient because the electrons move more freely to generate electricity, but polycrystalline cells are less expensive to manufacture.
The maximum theoretical efficiency level for a silicon solar cell is about 32% because of the portion of sunlight the silicon semiconductor is able to absorb. The best panels for commercial use have efficiencies around 18% to 22%, but researchers are studying how to improve efficiency and energy yield while keeping production costs low.
Other technologies being developed include multijunction solar cells, thin-film solar cells, Perovskite solar cells, quantum dot solar cells and organic photovoltaics. Look for more on these technologies in the future.
Editor’s note: This story was provided by the Office of Energy Efficiency & Renewable Energy at the U.S. Department of Energy.