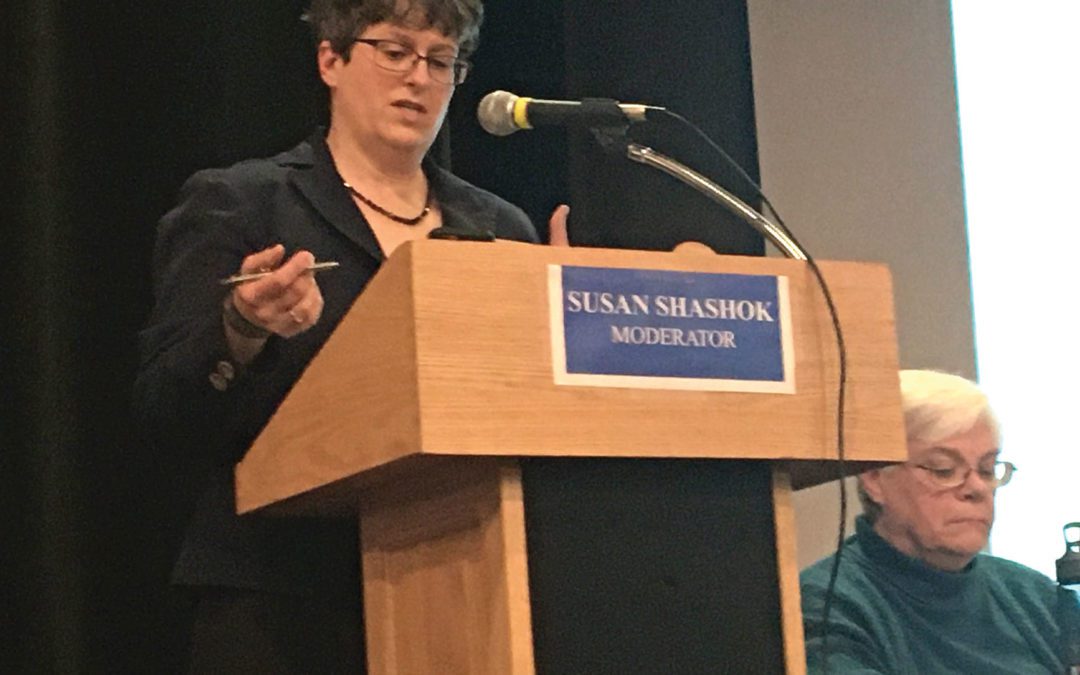 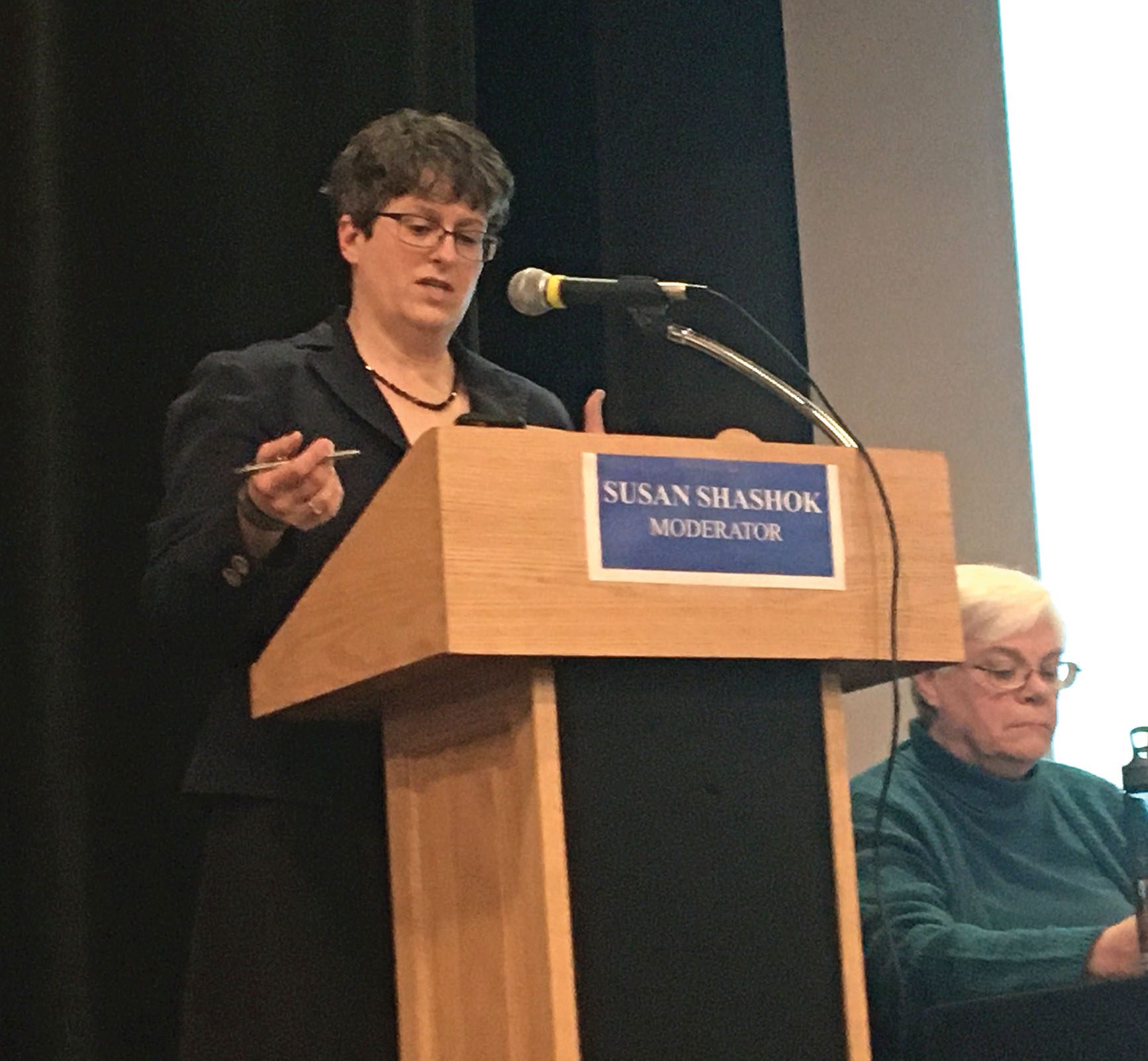 SUSAN SHASHOK ON Monday presided over her first Middlebury town meeting as moderator, taking over from former Vermont Gov. James Douglas. Middlebury had a lively annual gathering.
By John Flowers

MIDDLEBURY — Middlebury residents at their annual gathering on Monday dispatched a fiscal year 2021 municipal budget of $11.5 million with little debate, then spent 40 minutes discussing the merits of a proposed quadrupling of the town’s annual contribution to Middlebury Regional EMS (MREMS).
Local voters then went to the polls on Tuesday to endorse three separate bond proposals (see related story) for a combined total of up to $5.35 million to bankroll projects aimed at replacing an aging water main in the Court Square area, fortifying the banks of the Middlebury River to avert future flooding in East Middlebury, and repurposing former sewer plant buildings into storage space for the municipal police department.

LARGE MREMS REQUEST
The hot-button topic on Monday was article four on the town meeting warning, which sought to bump Middlebury’s MREMS appropriation by $63,720, from the current $21,240 to a total of $84,960. Residents in the other nine communities were similarly asked on Monday to approve what amounts to a per-capita increase from the current $2.50, to $10.
MREMS provides a variety of emergency medical services — including paramedic and heavy rescue — to a service area that includes 17,000 residents spanning the Addison County towns of Middlebury, Salisbury, New Haven, Ripton, Orwell, Shoreham, Whiting, Bridport, Cornwall and Weybridge.
MREMS board member Ben Fuller told a town meeting crowd of around 200 people in the Middlebury Union High School auditorium that the additional revenue was needed to help the non-profit organization replace its aging ambulance fleet in a more timely manner.
“It is a large increase, and it’s overdue,” Fuller said. “That said, it is not out of step with what the rest of the rescue services across the state command from the towns that they serve.”
Fuller reported the statewide average for community support of ambulance services is around $26 per capita. Some ambulance services are reaping $60 per capita, according to Fuller.
“We are in a good position in that we don’t need to ask for that much, but we do need to ask for this increase,” he said.
While current revenue streams are supporting MREMS operations, there’s no predictable funding source for new ambulances, according to Fuller.
MREMS is currently running ambulances that are 12 and 18 years old, respectively, he said.
“The equipment needs to be updated much more frequently than that,” Fuller stressed, “and when you’re running vehicles that old, the wear and tear adds up. So you’re spending more on maintenance than you really should be. There’s also not a lot of resale value when you go to sell ambulance with 200,000 miles.”
Historically, MREMS has sent out donation appeals to the community when a new ambulance is needed.
“We don’t think that’s a sustainable model, so we’re asking for an increase from each of the member towns so we can fund and establish an ongoing equipment replacement fund,” Fuller said.
A per-capita increase to $10 from member towns would immediately generate another $160,000 in revenues that would allow MREMS to replace its next ambulance in 2026 when it is nine years old, Fuller explained. Then the organization would be able to adopt a schedule, beginning in 2028, of replacing an ambulance every two years once it turns eight years old, according to Fuller.
Some town meeting attendees said MREMS’ request should be approved. Others — while extolling the value of the organization’s services — argued the proposed quadrupling of the town’s financial commitment should be more thoroughly vetted by the selectboard before becoming etched in stone.
“This is a large increase in a contribution to a nonprofit,” resident G. Kenneth Perine said.
It was an increase that might send the wrong message to other nonprofits seeking Middlebury taxpayers’ support, added resident Mark Mooney. He said the proposed increase of $63,720 “may set a precedent for other agencies to look at Middlebury for substantial donations, knowing this one may pass. I’m not questioning the service provided, but a quadruple increase in one year I think is extraordinary and the selectboard should vet this before we approve it.”
Resident Victoria DeWind successfully moved to amend the article so that it would, if approved, set Middlebury’s MREMS donation at $84,960 for next year only. It requires the selectboard return to the 2021 town meeting with a longer –term funding recommendation for the organization.
Middlebury selectboard Chairman Brian Carpenter acknowledged he and his colleagues hadn’t devoted as much time to considering the MREMS request as they would have liked. Part of that was due to the relative lateness of the organization’s ask, according to Selectwoman Heather Seeley.
“I’ve heard from a number of (colleagues) that they would like to vet it through our full process,” Carpenter said.
And he believes the town should have more of a say in how the much-larger contribution should be spent.
DeWind’s amended motion passed by a substantial voice vote, after attendees considered — and ultimately defeated — a separate proposal to table the MREMS request until a future town meeting. The notion of withholding funds from MREMS didn’t set well with many voters.
“I think to put it off is putting people’s lives at risk and turning down a very reasonable request from an excellent service that we all take advantage of,” resident Max Kraus said. “I hope everyone will vote ‘yes’ for this year, and look forward to the selectboard’s investigation for future years.”

TAX PAYMENT DATES
The article generating the second-most discussion at Monday’s meeting was, oddly enough, a request that voters usually rubber-stamp each year: When to pay property taxes. Residents were asked to establish two due-dates for their property taxes next fiscal year: Oct. 15, 2020, and March 15, 2021. Middlebury has historically allowed property taxes to be paid in three separate installments. But the selectboard last year decided to go to the two payments per year, reasoning it would drive less traffic to the town offices at 77 Main St. during this year’s rail bridges replacement project.
But a majority of town meeting participants on Monday successfully lobbied to have the three-payment system restored, arguing it would soften the financial stress on lower-income households.
“I think this is a hardship on people,” resident Maja Zimmermann said of the two-payment plan.
She added many residents either pay their taxes online or by mail, thus negating concerns about exacerbating downtown traffic.
“I can’t imagine that many people coming to pay their taxes and having to park,” Zimmermann said.
Middlebury Treasurer Jackie Sullivan estimated around one-third of Middlebury residents pay their taxes at the town office. And she expressed a willingness to forge payment plans for those who are struggling financially.
Resident John Barstow argued the two-payment system for taxes works against a current effort to encourage downtown commerce during construction.
“I thought we wanted to attract people downtown during construction; we are at cross-purposes here,” Barstow said, eliciting laughs and applause. “Please vote this down.”
Voters listened to Barstow and overwhelmingly supported an amendment restoring the three-payment schedule.

BUDGET, OTHER SPENDING
In other action on Monday, Middlebury residents:
•  By voice vote, overwhelmingly supported a proposed municipal budget of $11,503,680, which will result in an increase of six-tenths of one penny to the current town tax rate of 80.2 cents per $100 in property value. Middlebury Town Manager Kathleen Ramsay listed the main budget drivers as being increases of $194,456 for wages and benefits, $239,462 for replacement of department of public works equipment, and $175,789 for various capital improvement projects.
Ramsay said those increases are in part being mitigated by the use of $183,745 in surplus money from a local option tax fund that’s being used to pay debt and maintenance for the Cross Street Bridge; a decrease of $98,050 in debt service on previously approved municipal projects, and the use of $242,462 in fund balance to stabilize the tax rate and to help replace Department of Public Works equipment.
Town meeting voters asked a few basic questions about the budget, and voiced concern about a staffing shortage at the police department that is driving up overtime expenses. Police Chief Tom Hanley said three of his full-time officers are on lengthy medical leave due to work-related injuries.
•  By voice vote, authorized the selectboard to use up to $1 million from the Cross Street Bridge reserve fund to help finance a water main replacement in the Court Square area. The water main in question is aging and has sprung leaks in recent years. Town officials want the water main replacement work to dovetail with the Vermont Agency of Transportation’s scheduled 2021 repaving of Class 1 highways in Middlebury, including Routes 30, 125 and 7. Plans call for most of the construction activity to occur at night and after the work is concluded on the new downtown rail tunnel.
•  By voice vote, allowed the selectboard to borrow up to $80,000 over five years to replace two police cruisers and related equipment.
Reporter John Flowers is at johnf@addisonindependent.com.