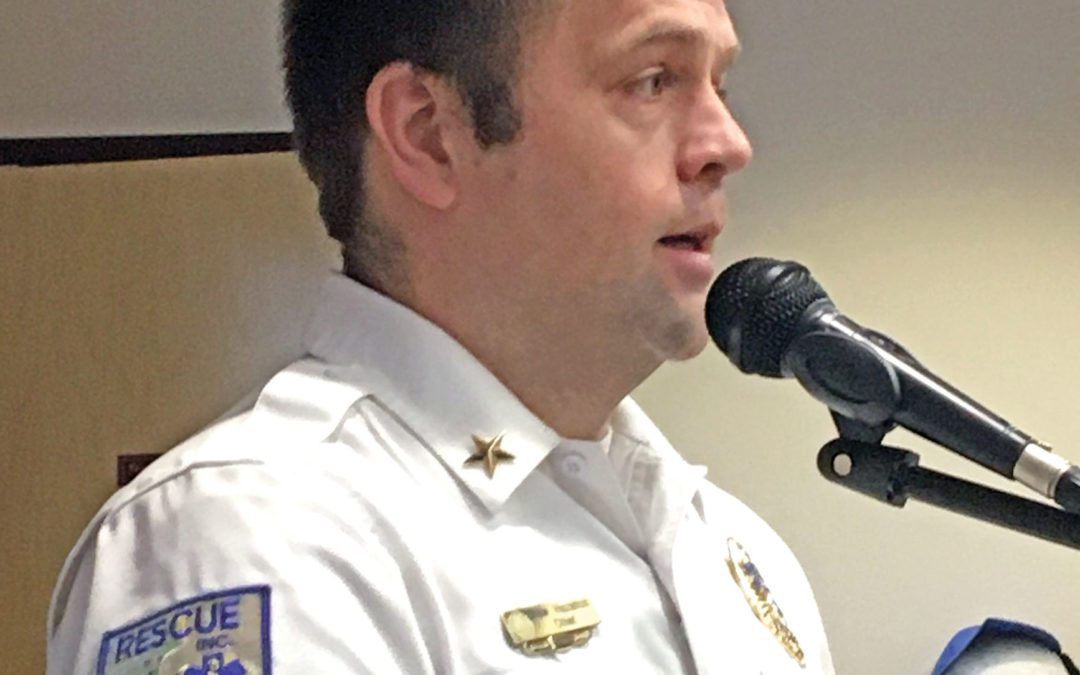 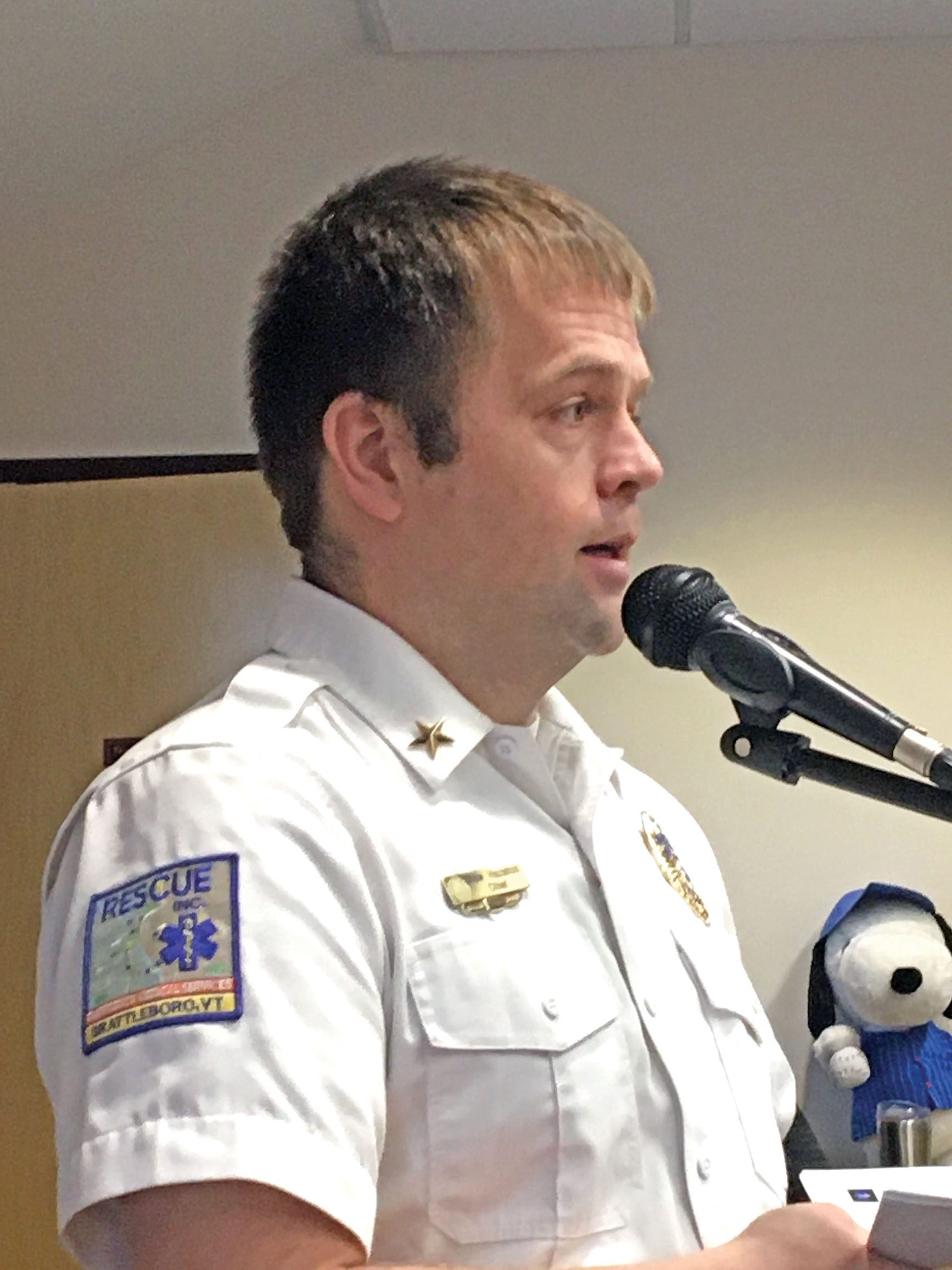 DREW HAZELTON, CHAIRMAN of the Vermont EMS Advisory Committee, spoke at Monday’s legislative breakfast about some of the financial and staffing challenges facing rescue squads throughout the state. Middlebury Regional EMS is proposing a quadrupling of the per-capita contribution it receives annually from the 10 Addison County towns in its service area.
By John Flowers

Forty-two percent of career EMS professionals in the state of Vermont are looking to leave because of wages. We lose 20% every single year. It is a crisis.
— Drew Hazelton

MIDDLEBURY — Residents in 10 Addison County communities will be asked next month to dramatically increase their financial support of Middlebury Regional EMS, or MREMS, in order to keep that nonprofit healthy and responsive to around-the-clock emergency calls.
In Middlebury, which generates around 40 percent of MREMS’ annual calls for ambulance service, residents at their town meeting will be asked to quadruple their commitment to the agency from $21,240 to $84,960 for fiscal year 2021, which begins on July 1 and ends June 30, 2021. Residents in the other nine towns covered by MREMS will similarly be asked to support what amounts to a per-capita increase from $2.50 to $10.
Why?
Because current revenues aren’t enough to help the organization update its ambulance fleet and pay its staff competitive wages, according to MREMS Executive Director Kate Rothwell. And she said MREMS’ $2.50-per-capita contribution request is far less than the $24-per-capita statewide average that other first-responder organizations ask of their member-towns.
“We do understand it’s a jump, but unfortunately, we’re trying to catch up from behind,” Rothwell said.
MREMS provides a variety of emergency medical services — including paramedic and heavy rescue — to 17,000 residents in 10 Addison County towns: Middlebury, Salisbury, New Haven, Ripton, Orwell, Shoreham, Whiting, Bridport, Cornwall and Weybridge.
Based at 55 Collins Drive, MREMS operates with a staff of around 40 that includes volunteers and full- and part-time paid employees. MREMS has $800,000 in debt to pay off on those headquarters.
In addition to its rescue functions, MREMS provides emergency dispatching, medical education and community outreach. The organization also extends mutual aid to rescue organizations in Bristol, Vergennes and Brandon.
Rothwell said MREMS is operating this year on a preliminary budget of around $1,575,000. Its revenues come from a combination of donations; fund raising; reimbursement for services through private insurers, Medicaid and/or Medicare; grants; a voluntary subscription program; and earnings from its communications center, with clients that include neighboring Porter Hospital.
And last but not least, MREMS each year relies on financial support from taxpayers in its service area. It comes in the form of appropriations voted on by local residents at annual town meetings. Some towns build the MREMS support into their yearly general fund budgets; others present it as a separate ask.

FINANCES
MREMS officials researched their proposed increase prior to unveiling it.
“A survey of nearly 60 of the 80 ambulance services in the state indicates ($10 per-capita) would rank Middlebury in the bottom one-third of appropriating municipalities,” stated David Pistilli, who until recently served as chairman of the MREMS board, in a recent letter to Middlebury officials explaining the rationale for the funding increase.
“Our staff is lean, our overhead is minimum, and our profit-to-loss is positive, but expenses continue to rise and we must save aggressively to modernize our ambulance fleet, a fleet whose age is accelerating due to increased volume,” Pistilli added. “Further, we must confront the state minimum wage vision and a tight labor market in order to staff with sufficient numbers of the highest quality medical technician and paramedic available.”
Gov. Phil Scott on Monday vetoed S.23, which would have raised the minimum wage to $12.55 over the next two years. The Democrat majorities in both the House and Senate last year sought to boost Vermont’s minimum wage from the current $10.78 to $15 by 2024.
Rothwell said MREMS isn’t financially able to pay a minimum wage of $15 per hour. While she declined to provide details about the organization’s pay scale, she acknowledged some are making less than $15 per hour. Others are earning more, based on their experience and certifications.
MREMS paramedic Paul Miller spoke candidly about the organization’s challenges during a Monday legislative breakfast hosted by the agency.
“People here are getting paid puny wages,” he said. “The hospital pays a lot more and has been poaching our people. It’s going to come a time where you may not have ambulance services available. I want you all to think about that. Bristol and Vergennes had been all volunteer; now they’re going to paid services because they cannot attract enough volunteers.”

STATEWIDE ISSUE
And MREMS isn’t alone in its efforts to remain solvent and fully staffed, noted Drew Hazelton, chairman of the Vermont EMS Advisory Committee.
He explained there are currently 2,800 EMS providers in Vermont, who respond to more than 102,000 calls annually. Hazelton said 96% of those providers are members of rescue squads that depend on volunteers. And 80% of those services are struggling right now to fill their ranks, according to Hazelton.
“Forty-two percent of career EMS professionals in the state of Vermont are looking to leave because of wages,” he said. “We lose 20% every single year. It is a crisis.”
At the same time, demand for service in Vermont for ambulance and first response squads has increased at 6% to 10% every year for the past 10 years, according to Hazelton. He attributed that surge to an aging state population that exhibits greater health care needs.
Rescue squad volunteers must pay $1,000 for six months of training just for the privilege of helping their communities, according to Hazelton. Training and education opportunities are sparse and often costly in Vermont, he said.
Vermont sets aside $1.5 million annually to help firefighters cover education expenses, while only $117,000 is set aside for first responders, according to Hazelton.
“Vermont has one paramedic program that runs through Vermont Technical College,” he said. “That program is nearly two times the cost of every other program in New England, making that education completely inaccessible to most Vermonters.”
Folks who made the grade as first responders deal with a lot of stress, to the extent that some experience mental health and substance abuse problems, according to Hazelton. While Vermont State Police have peer support, and access to state-funded clinicians, the same can’t be said for first responders, he said.
“Suicide among first responders is on the rise and there’s currently no system in place to support the first responders who work in EMS and volunteer fire service,” Hazelton said.
He concluded with some stark statistics and an ominous forecast of the future of EMS in Vermont if the system doesn’t receive an infusion of new resources and workers.
“Our system is on the verge of collapse,” Hazelton said. “We don’t have enough personnel, we don’t have enough financial resources. The Medicaid population in Vermont is currently paying around 30% of the (true) cost of delivering service. Any businesspeople in the room would understand that if you’re paid only 30% of your costs, you’re going to go out of business.”
Reporter John Flowers is at johnf@addisonindependent.com.