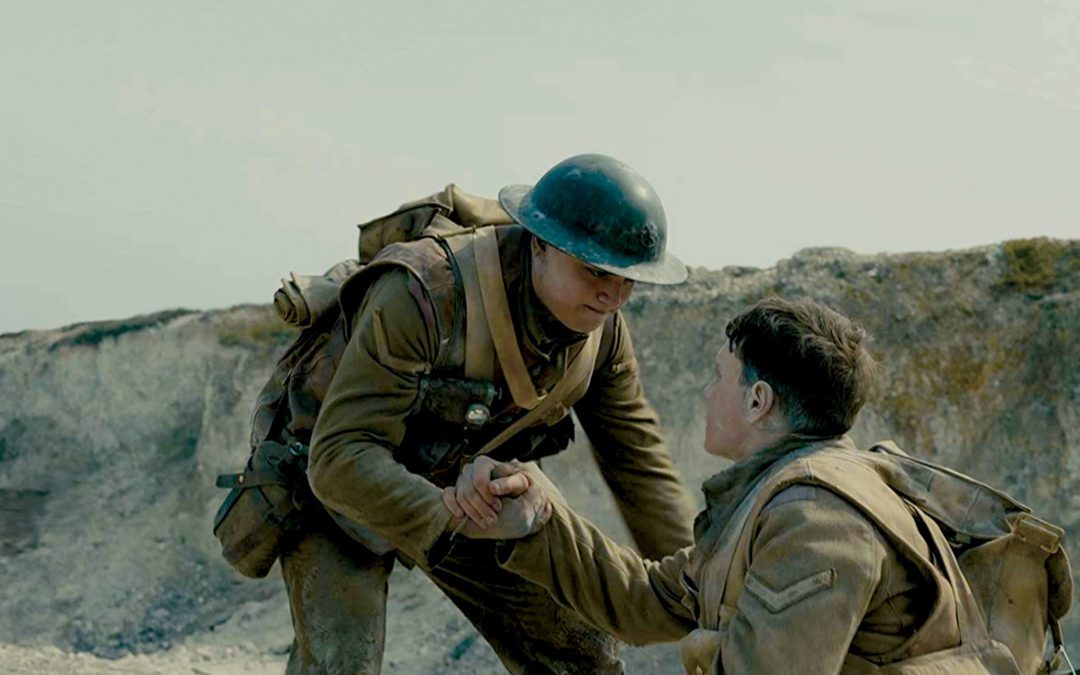 1917 — Running Time: 1:59 — Rating: R
“1917” is a quality movie that led me to some dark thoughts. If the story doesn’t trigger lasting thoughts for you about men and war, then fine, just enjoy this good movie. The quality came from director Sam Mendes and the two fine actors who carry the film.
Blake (Dean-Charles Chapman) is chosen to deliver a crucial message to the war front. Schofield (George MacKay) joins Blake and the entire movie unfolds as they carry the message that will, if they are successful, stop the Allies from attacking the Germans who are secretly hidden as they wait for the arrival of their enemy. Sixteen-hundred men will live or die depending on their success or failure.
We follow the messengers through trenches that are littered with dead bodies, dead horses, blood-soaked dirt, and body parts. Their hideous walk is what we watch while fear grows in us that these two might not reach their goal. After an hour of watching them run, crawl and climb in fear, a wave of anger spread through me and I ask for your tolerance while I switch to talking about that.
Anger surged because the movie triggered the truth. As the two men lead us through a mass of recently destroyed bodies and equipment, the whole of it sinks into us. Here we are in yet another war like all the others that unfold when men reach an impasse. Pride kicks into leaders. War comes. We listen here to men talking and barking short orders about how to handle the German lines in the fewest of words: “Just kill them all.” When nations can’t agree, men kill.
“1917” is more than a movie. It is a sharp slap for us in a time when many countries now possess the weaponry to destroy whole countries. Still, we respond to deadlock with physical force.
When the problem that confronts male leaders appears to be deadly, they usually issue the orders to respond with bombs. Physical action is the only weapon left to leaders even when it kills thousands of young soldiers. Given a suicidal order by his commanding officer, a young man replies, “Thank you, sir. Goodbye Sir.”
Think of it: our massacre of the native peoples of North America, World War I, the Korean War, Iraq… What positives were gained by those wars? With the historical perspective now available, the world is now blaming the administration in office at the time. In every one of those wars, young men who survived were affected for the rest of their lives and many never lived to go home.
During the two hours of watching destroyed towns, vehicles and dead bodies covered in blood, we wonder how even the young survivors can re-enter their pre-war lives of families and friends who were untouched by what they experienced. Why do we allow single officers defending their superiority to make decisions that kill thousands? There might be another way. Should women make war decisions? Why not try that?
— Reviewed by Joan Ellis