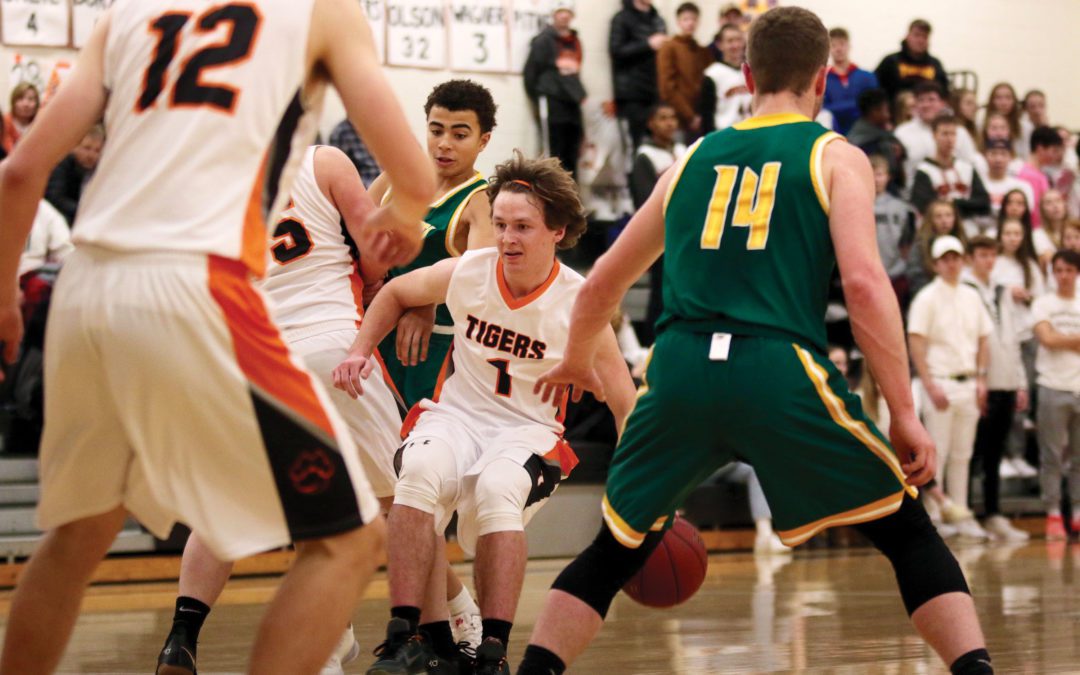 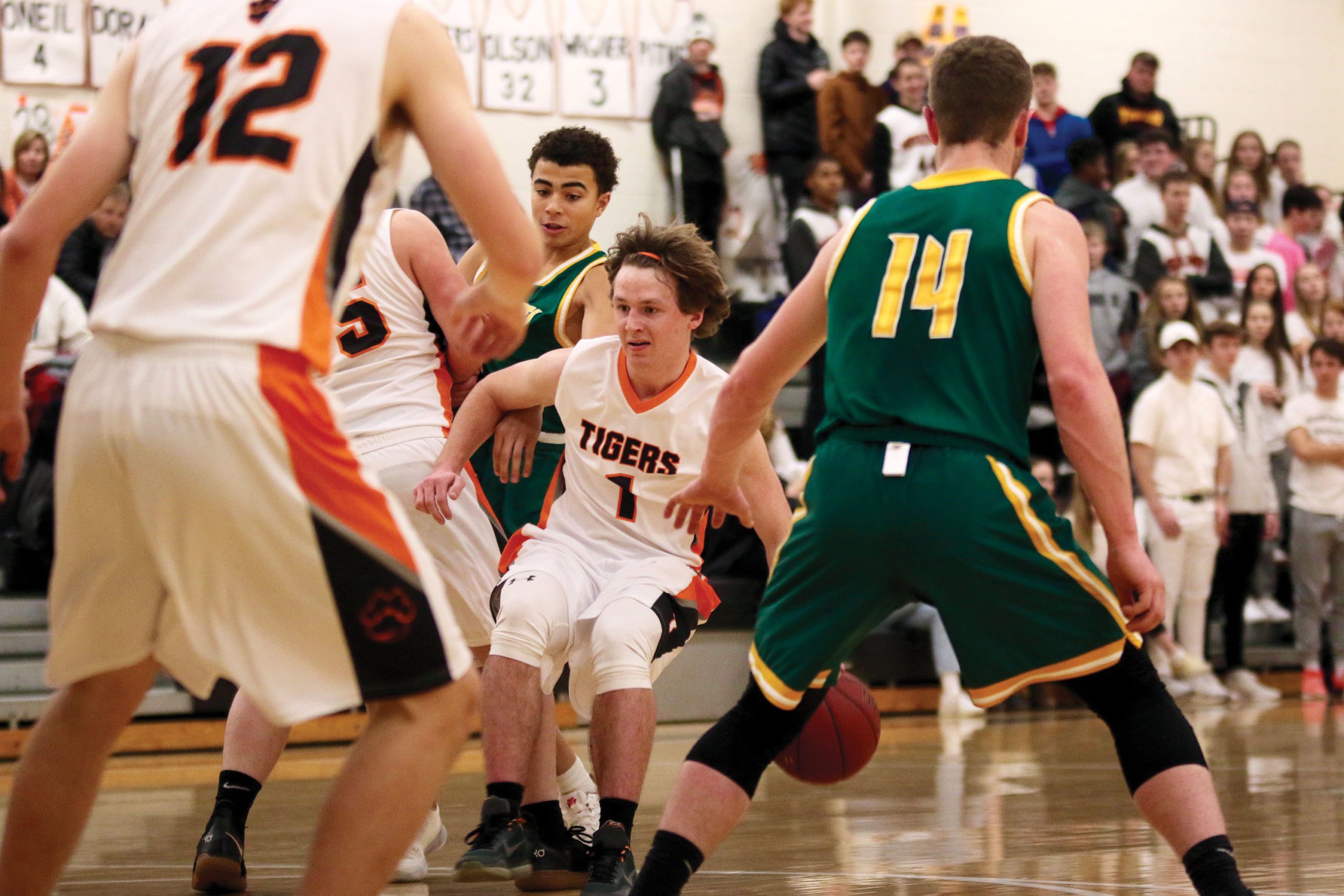 MIDDLEBURY — Both boys’ basketball teams at Middlebury Union High School on Friday evening used tough man-to-man defense and full-court presses, and both the host Tigers and visiting BFA-St. Albans probably also could have taken better care of the ball against that pressure.
For three quarters the Tigers were more successful applying and dealing with defensive pressure, but in the fourth quarter the Bobwhites amped up their press and forced seven turnovers. The Bobwhites also scored 26 of their 62 points in the period to wipe out an 11-point Tiger lead and come away with a 62-57 victory.
MUHS Coach John Howe saw his team drop to 7-6 with the loss to the 6-7 Bobwhites. Despite some things to like, Howe said the Tigers could have responded better to the BFA press in the fourth quarter.
“I’ve got some film to sift through tonight,” Howe said. “We didn’t run our press break. And if you don’t run the press break and just think you’re going to push through it up the court, you’re not going to make it work.”
The positives were the Tigers’ own defensive efforts in forcing 20 turnovers, even if BFA guard Kaleb Dunsmore went off for 24 points.
“They executed their press pretty well,” Howe said of his team. “Their on-ball defense was excellent. It’s hard to stop that kid 14, Dunsmore, hitting mid-range jump shots. Nobody does that anymore so people aren’t anticipating it. He did a phenomenal job.”
The game was close throughout the first half. Five Tigers scored in the first quarter, and they built a 14-8 lead before four late points by Dunsmore made it 14-12 after one.
The Bobwhites completed a 9-0 run early in the second quarter with a three from Taylor Yates and a hoop inside from Case Ballard to lead by 17-14 early in the second.
The Tigers answered with a 12-0 run to make it 26-17: Tyler Buxton hit in transition. Gabe Dunn and Karic Riche sank threes, and Drew Gill came in off the bench for a transition hoop set up by Buxton and a layup assisted by Tim Goettelmann after an offensive rebound. BFA then cut the lead to 27-24 at the break, with three Bobwhites putting in points.
The Tigers pulled out to an 11-point lead midway through the third quarter, 39-28, with a 12-4 surge. Buxton scored five points, Dunn sank a three, and Mason Kaufmann, who played well on defense and on the boards, contributed two putbacks.
Dunsmore kept BFA afloat with eight points in the period, but the Tigers still led by nine after three, 45-36, when Riche hit a late three and then beat the buzzer with a transition layup on a bounce pass from Dunn. Ten seconds into the fourth quarter Dunn drove to make it 47-36, and it looked good for MUHS.
But then came seven of the Tigers’ 23 turnovers, and an 11-0 BFA run that tied the game at 47-47 at 5:15. Charlie Yates erupted for seven points in the surge, and Dunsmore hit two more jumpers.
Buxton drove to restore the lead at 4:11, but a Taylor Yates three at 4:00 gave BFA its first lead since the second quarter, 50-49. Two Goettelmann free throws at 3:26 made it 51-50, but a Dunsmore jumper at 3:00 gave BFA the lead back. On either side of that BFA bucket the Tigers missed the front end of one-on-one free throw chances.
BFA’s Charlie Yates returned the favor with two missed free throws at 2:34, and after a Tiger turnover they missed two shots and Buxton rebounded. That led to a Goettelmann free throw at 2:25 that tied the game at 52-52. Charlie Yates then missed two more free throws, and a Dunn offensive rebound gave the Tigers the lead at the two-minute mark. Charlie Yates drove to tie the game 10 seconds later, and at 1:43 Dunn hit two free throws to put the Tigers on top again, 56-54.
Charlie Yates hit two free throws to tie the game, and at 1:04 Dunsmore sank one from the line. Dunn hit one of two free throws for MUHS, and it was 57-57. At 0:49 BFA center Ben Voyer powered for the go-ahead hoop.
The Tigers then attempted a wide-open three for the lead, but were called for traveling and were assessed a technical for protesting the call. It only cost them a point, as BFA’s Hunter Livingston hit one of two free throws, and the Bobwhites did not score on the following possession, and it was 60-57. But the call cost the Tigers valuable time, and they could not score again. Livingston iced the win with two free throws at 0:26.5.
Charlie Yates and Taylor Yates finished with 11 and 10 points, respectively, for BFA. Riche led MUHS with 16, and Buxton and Dunn added 12 apiece. Buxton and Kaufmann, who scored six, were the most active on the boards for MUHS.
As it stands now, the Tigers are in the No. 8 spot in Division II with home games vs. Missisquoi on Monday and Milton on Wednesday and a road date with North Country on Saturday on this week’s schedule. Howe said they would be working on ball control.
“We’ve got some adjustments to make,” Howe said. “It’s always a work in progress. As long as we can stay above .500 when we get to the playoffs, I’m not going to worry too much about the record.”