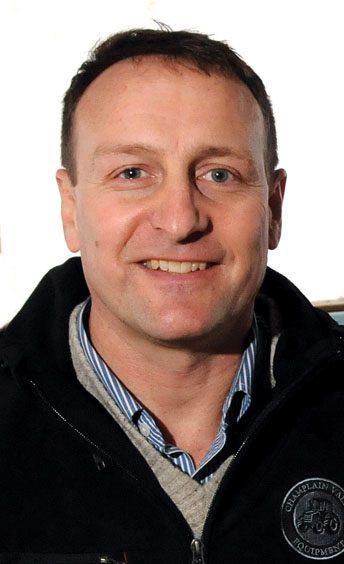 (Child care) was a major issue for me, raising kids in this community, as there wasn’t enough capacity to get our kids into child care. It’s a significant issue for young working families.
— Brian Carpenter

MIDDLEBURY — Middlebury selectboard Chairman Brian Carpenter will run for a third consecutive term this March, saying he’d like another three years to whittle away at a municipal to-do list that includes completion of the downtown rail bridges project and flood mitigation improvements to portions of the Middlebury River.
Carpenter and Swift House Inn co-owner Dan Brown are the only two confirmed candidates so far for two selectboard spots that will be up for grabs on Town Meeting Day. Incumbent Selectwoman Laura Asermily has announced she won’t seek re-election. Candidates for municipal and school offices have until Jan. 27 to file petition papers with their town clerks.
Terms will also expire next March for the following four members of the Addison Central School District board: Mary Gill and Victoria Jette of Middlebury, Jennifer Nuceder of Salisbury and Suzanne Buck of Bridport. Gill as of last week was undecided on a reelection bid, while Nuceder, Jette and Buck are poised to run for additional three-year terms. The Independent has reached out to all four incumbents for lists of their respective priorities through 2022.
Carpenter won a seat on the Middlebury selectboard in 2014, one of eight candidates who competed for three available positions. As the owner of Champlain Valley Equipment on Exchange Street, he’s brought a solid business perspective to the town’s chief governing board.
Carpenter also spent more than three decades in service to his country with the Vermont National Guard, ultimately retiring as a brigadier general in 2014. He provided key leadership during Guard deployments to the Middle East and during the devastation of Tropical Storm Irene.
If re-elected, Carpenter said he’d like to keep advancing:
• Upgrades to town infrastructure, including water and sewer mains, roads, sidewalks and culverts. At the top of the town’s current project list is a water main replacement project that will involve portions of Court Street, Court Square and Washington Street. Town officials have tentatively placed the improvement costs at $2 million. It remains to be seen how much — if any — of the project costs will need to be bonded.
• Long-range planning for downtown Middlebury. Town officials and local citizens, with the aid of a consultant, are preparing a downtown master plan that will imagine future economic development and housing opportunities in the core village area.
“Once (the master plan) is finalized, we can work toward building out opportunities the plan has identified so we can continue to grow the community … and keep the downtown a vibrant place,” said Carpenter.
• Economic development. The town’s economic health task force is slated this spring to offer strategies for attracting more jobs and businesses to the county’s shire town.
• The East Middlebury flood resiliency project. Local voters in March will be asked to endorse a $2 million plan to contain the Middlebury River within its banks in East Middlebury, which suffers much damage during flood events. The scope of work includes repairing and extending the existing floodwall 150 feet downstream; armoring sections of the Ossie Road berm; and removing sediment from chute entrances and the top of large sand bars within the river. The town’s share of the project is being placed at $500,000, in anticipation the remaining $1.5 million coming from the Federal Emergency Management Agency. If FEMA doesn’t come through, the town will seek grants and/or consider phasing the project, according to local officials.
“It’s a very high priority,” Carpenter said. “It impacts that whole community. It’s more of a safety issue, so it’s important for us to get that done.”
• More collaborations with Middlebury College. For example, Carpenter referred to a potential town-gown “child care initiative” that would increase the community’s ability to serve more young families with children.
“It was a major issue for me, raising kids in this community, as there wasn’t enough capacity to get our kids into child care,” Carpenter recalled. “It’s a significant issue for young working families.”
• A plan to install sidewalk along the length of Exchange Street, recognizing it has become home to more diverse services than simply industries. There are now a few cafes, eateries and retail spots, and town officials want people to be able to walk to those amenities and workplaces. Middlebury has won grants to help pay for the sidewalk project.
Carpenter hopes Middlebury voters share his priorities enough to give him another term.
“I’d like to see more of this stuff get done, and then pass the torch,” he said.
Reporter John Flowers is at johnf@addisonindependent.com.