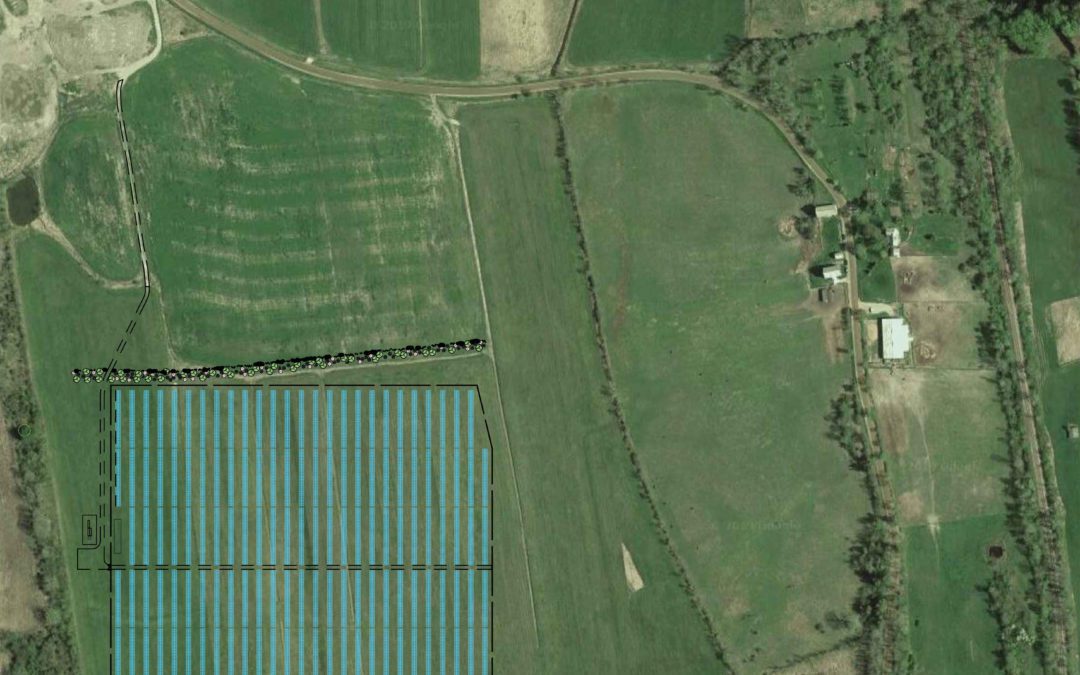 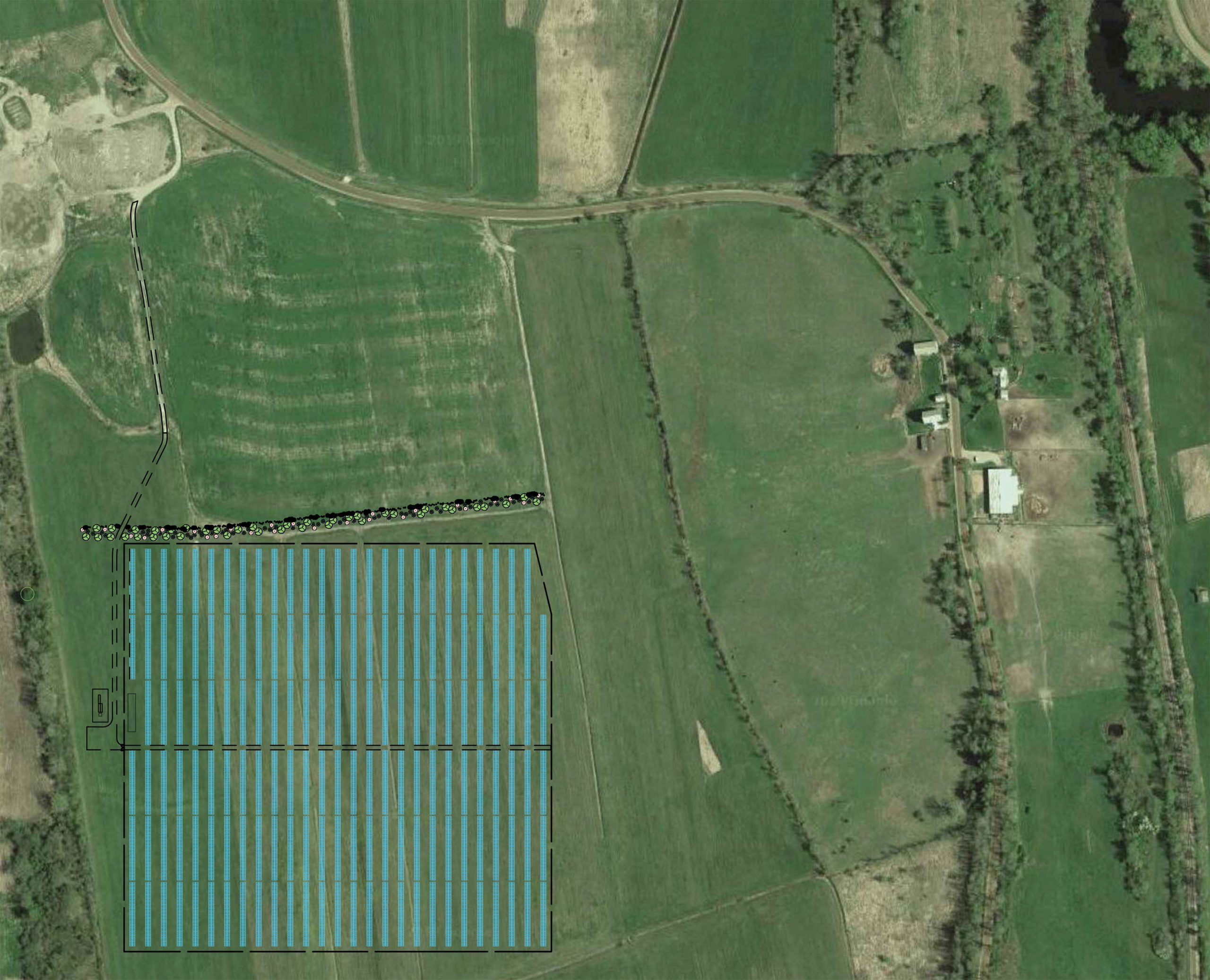 THIS GRAPHIC SHOWS the proposed layout of a 5-megawatt solar array that would be developed by Encore Renewable Energy on land in Middlebury owned by Middlebury College. The solar panels would occupy approximately 30 acres to the south and west of South Street Extension; the Eddy Horse Farm is just to the east of the array.
By John Flowers

Encore and Middlebury College state that this is the only viable location. I don’t believe that.
— South Street resident Debbie Tracht

MIDDLEBURY — The Middlebury selectboard on Dec. 17 will decide whether to endorse the proposed location of a 5-megawatt solar farm off South Street Extension, a plan that has generated considerable opposition from neighbors and those who routinely walk the scenic stretch near the Eddy Farm for Horse & Rider.
Around a dozen people showed up at the selectboard meeting this past Tuesday evening to give the panel food for thought in coming to a decision on the solar farm, which would be developed by Encore Renewable Energy on land owned by Middlebury College. The board listened intently to around 90 minutes of testimony. Much of it was given by folks who said the proposed 30-acre field of solar panels would mar a spectacular view enjoyed by those who bike, walk and jog South Street Extension. They presented the selectboard with a petition bearing the names of 72 people who agree the project developers should look for a different site.
A few others at the meeting urged the board to endorse the Encore plan, saying it — and future green energy projects — will be essential in helping society transition from fossil fuels.
The project doesn’t have to undergo local or Act 250 reviews. But the combined feedback from town officials and area residents will be considered by the Vermont Public Utilities Commission in its review of the Encore solar farm plan.
Encore Chief Development Officer Derek Moretz told the board his company plans to file its application with the commission as soon as the next few weeks.
Power generated by the arrays would be funneled into the Green Mountain Power electrical grid and be credited to the college. College officials said the project is in keeping with the institution’s “Energy 2028” initiative, built on four primary commitments: Transitioning to 100-percent renewable energy sources to power and heat the institution’s main campus, reducing energy consumption at the core campus by 25 percent by 2028, expanding educational opportunities for students to make a direct impact on the college’s renewable energy priorities, and reducing fossil fuel investments currently reflected in the college’s endowment fund.
Encore explored eight potential college-owned locations near the campus. Four of those sites were off South Street Extension. The other four were off Route 125, James Road, Route 7 and on land in Middlebury’s industrial park. All of the sites explored are under the college’s control.
Encore narrowed the list to two sites off South Street Extension. Last spring, it chose a site upland and to the west of the current preferred site. But the company later nixed that site largely because of large quantities of ledge found there. So they shifted it east to the current location, which neighbors contend would spoil one of the best views in town.
“I strongly oppose the siting of this solar array,” said South Street resident Debbie Tracht. “We’re not going to get that valley back once we mar it.”
“Encore and Middlebury College state that this is the only viable location,” she added. “I don’t believe that. I believe they’re spending an awful lot of time defending this location and trying to convince the community and the powers that be that this is the only location.”
South Street Extension resident Leslie Kameny urged the college and Encore to “think more creatively” about siting the proposed array.
“The present array siting does not answer how to make these two competing needs — alternative energy and preserving valued landscapes — coexist harmoniously,” she said. “Rather, it takes a less developed part of the town, out of view of the campus, with fewer residents to contend with, to develop their alternative energy solution. I applaud Middlebury College for trying to do its part in finding alternative energy solutions on their campus. At the same time, due to their own energy goals that they’ve set, they are demanding a lot from the community.”
Some of those who attended Tuesday’s meeting suggested the college consider prohibiting students from having vehicles on campus. This, they argued, would reduce the impacts of fossil fuels and allow for at least a portion of the proposed solar array to occupy the college’s parking lots.
“Covering the parking lots doesn’t just give you solar; it actually cools the earth, it’s a great way to cut down on consumption of fossil fuels,” South Street resident Bill Biederman said. “There are actually nine acres of parking lots just on the Middlebury campus… You probably couldn’t get a third of your project on (those lots), but it’s something to think about.”

GETTING CREATIVE?
Others voiced support for the solar farm plan, or at least tweaking it to make it more palatable to the community.
Resident Leslie Caer Amadora said the project could become a destination, if it is adapted to meet more needs than simply electricity. She spoke of the potential for colored solar panels, solar-powered sculptures and/or making it an education center.
“Coming from an arts background, one of the thoughts I’ve had is to capitalize on this if we can, for the sake of the local residents who enjoy this as a recreational area, for our tourism economy, to make this a destination,” Amadora said.
“I think to some degree by adding creativity to the mix, you can mitigate the industrialization,” she added. “I think there are a lot of creative possibilities that can potentially be woven into this project.”
Former Democratic State Rep. Steve Maier of Middlebury gave his thumbs-up to the plan and its location.
“I think it’s a good site, well-designed, well-mitigated as far as reasonable impacts,” he said. “It’s time for Middlebury to be moving forward more aggressively with renewable power. We’re in the midst of a global climate emergency and I’d urge you to move this project forward. We need more of these in town… These are the types of projects that as responsible world citizens, we should be pursuing and not just reacting to as a community.”
Moretz was pressed on the economics of the project, and offered these details:
• Total cost of the array: $8 million to $9.5 million, installed.
• Middlebury municipal property tax revenue: Around $40,000 during the first year of operation, escalating toward $60,000 during the 25-year term. It would also be assessed for education property taxes.
• The financial return to Encore on a 5-megawatt solar project is about to 6-8%.
“These projects are fairly marginal,” Moretz said. “That’s why we really care about the economics and driving the costs down as much as possible, otherwise the projects would not exist.”
Selectboard members will now prepare for their upcoming vote on whether to endorse the Encore plan. Selectman Victor Nuovo was candid in sharing his feelings about the proposal. He believes the college should have done more to involve the community in the review of Encore’s current preferred site.
“It does seem like a public relations venture before it became a serious community responsibility,” said Nuovo, a retired professor of philosophy at the college. “I think the college needs to start over by engaging the town as a responsible member of the community. It hasn’t done this, and I might say as someone who’s connected with the college, it’s made me ashamed. I cannot support this particular venture, but I very strongly support the town and the college engaging in finding alternative renewable sources of energy.”
Sue Ritter, special assistant to college President Laurie Patton, challenged Nuovo’s assertion.
“I do take issue with any notion we haven’t been collaborative with the town on our ideas,” she said. “This has not been us just sitting up here doing what we want. We have engaged the town. We do take seriously the town’s input on this.”
Reporter John Flowers is at johnf@addisonindependent.com.