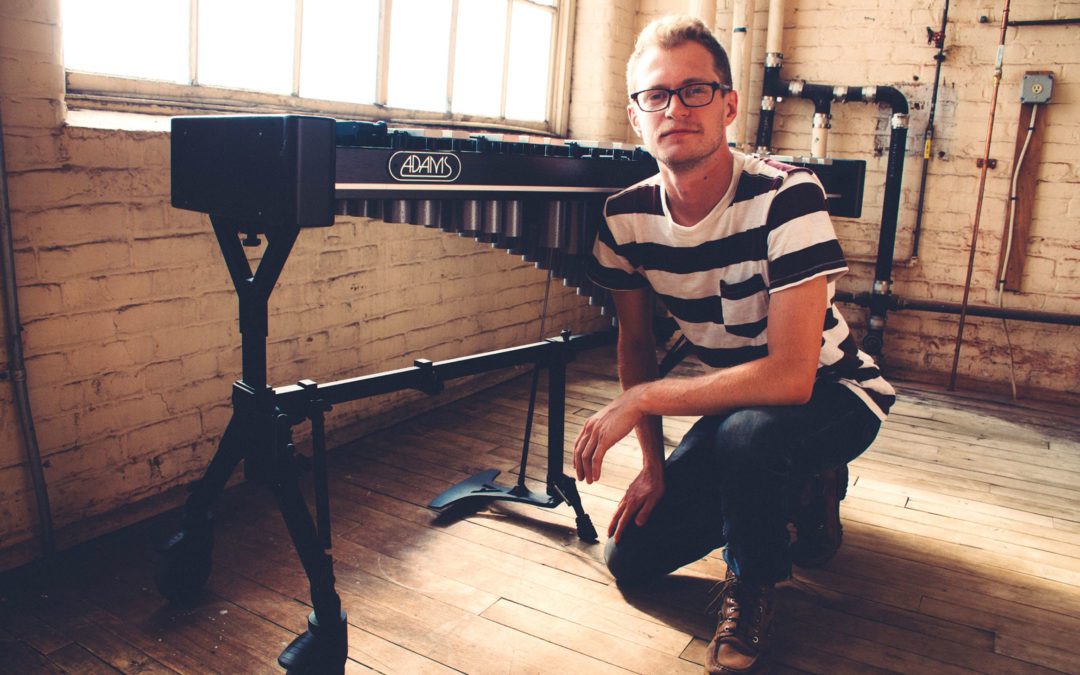 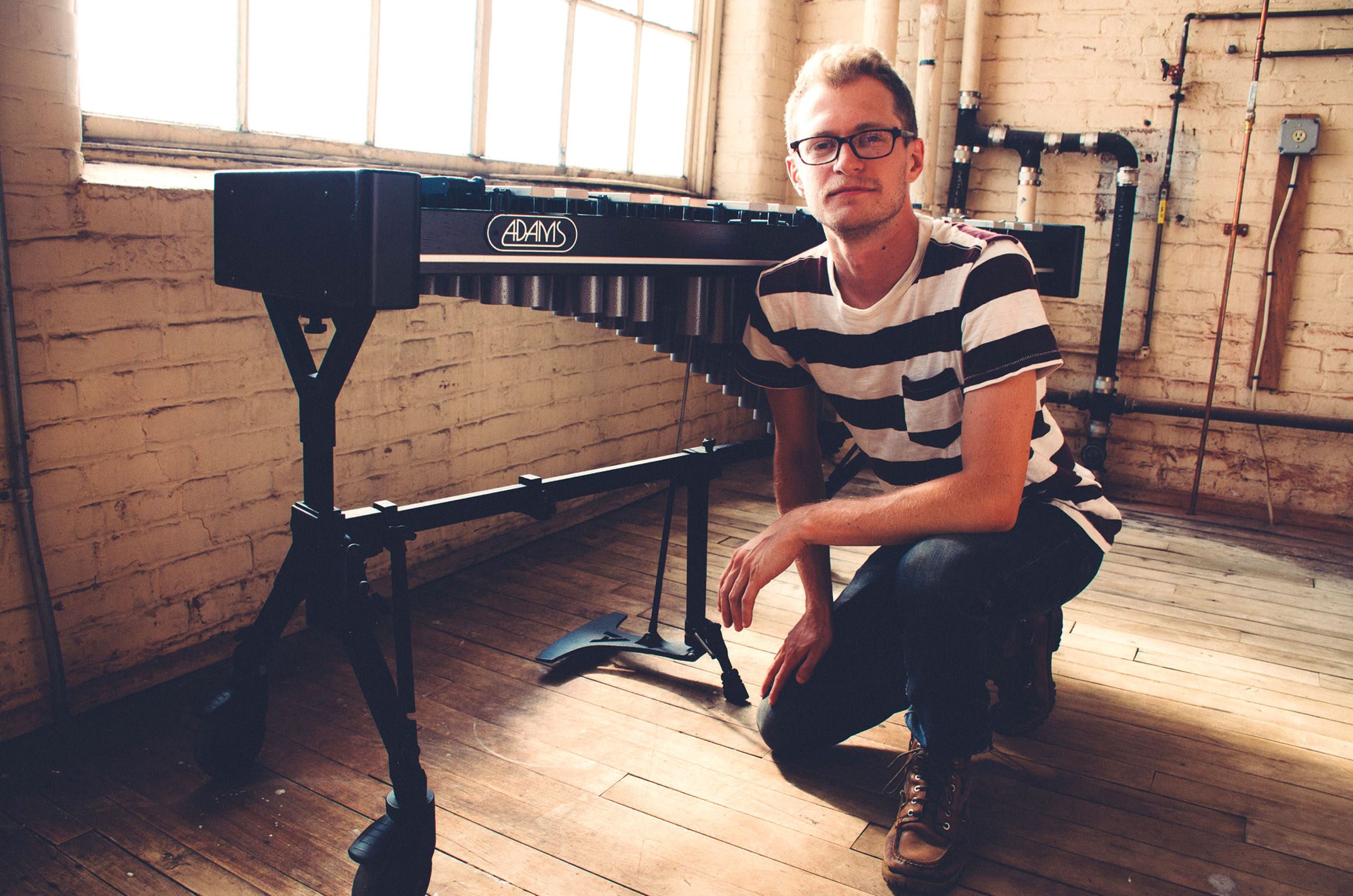 Brandon Music welcomes the highly talented composer, percussionist and producer Julian Loida to Brandon Music for the first time on Saturday, Nov. 30, at 7:30 p.m. This promises to be a unique sound experience comprising all original music on vibraphone written and performed by Loida himself.
Loida first revealed his high skill level as a percussionist when performing at Brandon Music as drummer with the Burlington-based band Ameranouche. Loida says his music gives voice to all “Wallflower,” the title of his debut album released in September. He asks his listeners to explore the introvert in each of us through his music. “Wallflower and the music I compose is closer to a musical painting in which I assemble sound to evoke the colors in my mind,” he says.
Loida’s music is beautifully haunting, immersive and calming while taking the listener on a musical pathway of exploration and discovery.
Loida’s musical curiosity and open-mindedness set him apart and have propelled him towards a wide-range of sounds, genres and artistic endeavors. He’s performed jazz, folk, and classical, collaborating with dancers, visual artists, songwriters/composers and musicians of all stripes. The thirst to participate in and experience this range of sounds is partly a product of Loida’s synesthesia. Music is a full-body experience for him, with sounds often invoking involuntary sensations of color, texture, or even taste.
Loida, whose music has been described as “shimmering” and “radiant,” has performed and written for many bands and ensembles of varying styles (the Cuban/Brazilian band INÃ, jazz quintet Mojubá, chamber-folk band Night Tree), and his music has been featured in film. His interdisciplinary projects aim at breaking down artistic barriers.
Loida has toured internationally as a featured artist at Korrö, Sweden’s largest folk music festival, and played some of the most prestigious music festivals in the U.S., such as Spoleto, New World Festival, the Exit Zero jazz festival, Caramoor American Roots Festival and Round Top Music Festival. He has performed with groups such as Alarm Will Sound, the Callithumpian Consort and the Chautauqua Symphony Orchestra.
As an educator, Loida shares his scores and deep rhythmic knowledge with students of all ages. In 2017, he received his Master’s Degree in Classical Percussion from New England Conservatory. This performance promises to be a truly distinctive and enriching experience.
Concert tickets are $20. A pre-concert dinner is available for $25. Reservations are required for dinner and recommended for the show. Venue is BYOB. Call 802-247-4295 or e-mail info@brandon-music.net for reservations or for more information. Brandon Music is located at 62 Country Club Road in Brandon.

MUSIC SERIES AT OCB
As part of the 2019 Music Series at Otter Creek Brewing, independent artist Alison “AliT” Turner will be performing at 5 p.m. on Friday, Nov. 29, in OCB’s pub space.
AliT, is a singer-songwriter (guitar/voice) based in Vermont. Once described as “a less-neurotic Alanis Morissette,” the songstress records and performs a heartfelt and unique style of alternative/indie pop. Having started writing songs at the age of seven, and picking up the guitar when she was 11, Turner has developed into an introspective songwriter and performer. Vermont’s Seven Days named AliT a finalist for Best Vocalist and Best Pop Artist in 2018 and again in 2019.
Turner released her sophomore album on Oct. 4, entitled, “Smoke & Mirrors.” With help from local Grammy-winning sound engineer, Ed Eastridge (Big Mo Records), the album was followed by a number of positive reviews. Art Edelstein of The Times Argus wrote, “(AliT) finds her voice in real-life issues, revealing a thoughtful, politically astute performer who can attack current issues without trivializing them.”
Chris Farnsworth of Seven Days adds, “Turner’s second offering makes a strong statement and exudes personality and sonic adventure. It’s good enough to ease worries of how she will evolve further and makes you wonder what that evolution will be.”
Her songs have been featured on Vermont’s Independent Radio Station ‘The Point’ as well as other local radio stations. Otter Creek Pub Space is located at 793 Exchange Street in Middlebury. For more information, call 802-388-0727.

MARIO THE MAKER MAGICIAN AT THT
On Saturday, Nov. 30, Town Hall Theater in Middlebury presents Mario “the Maker Magician” Marchese, a New York-based, touring family performer known for his handmade robotic creations, upcycled props and new school slapstick character. Show times are 1 p.m. and again at 4 p.m.
It’s magic through the lens of the Maker Movement. As seen on Sesame Street, Sprout, and live on tour with David Blaine, Marchese’s show is an upbeat, hilarious and very interactive experience that leaves children and families inspired to nurture their own creative paths. Blaine calls him “the best kids’ magician in the world!” Recommended for ages 2 and up (and their families).
Tickets are $20 for adults and $10 for youth (plus fees). Discounts are available for groups of four or more. Tickets can be purchased at townhalltheater.org, over the phone at 802-382-9222, at the THT box office, Monday – Saturday, noon to 5 p.m. or at the door one hour before show time. The Town Hall Theater is located at 68 South Pleasant Street in Middlebury.

EXHIBITS AT COLLEGE MUSEUM OF ART
If you’ve got family visiting from away, and are looking for something to do aside from eating more turkey, the Middlebury College Museum of Art has some great exhibits on display. You have a wide variety to choose from.
There are three ongoing exhibits: Ancient Mediterranean and Early European Art in the Lower Gallery; European and American Art in the Cerf Gallery; and Asian Art in the Robert F. Reiff Gallery.
In addition, there are three current exhibits that run through Sunday, Dec. 8. The first is “Votes…for Women?” This exhibit includes vintage photographs, banners and memorabilia and coincides with the 100th anniversary of the campaign to ratify the 19th Amendment to the U.S. Constitution in 1920.
The second, “MuseumLab: Conversations across the Curriculum” has turned the Overbook Gallery into a “teaching laboratory,” displaying a diverse array of works selected for courses taught by professors from across the college’s academic curriculum.
The third current exhibit, “Artemis to Armstrong: Capturing the Moon in Art and Science,” marks the 50th anniversary of the lunar landing. The Museum’s summer interns have curated an exhibition exploring the relationship between wonder and science in depictions of the moon.
The museum will be open on Tuesday, Nov. 26, and Wednesday, Nov. 27, from 10 a.m. to 5 p.m., and on Saturday, Nov. 30, and Sunday, Dec. 1, from noon to 5 p.m. (closed on Thanksgiving Day, Thursday, Nov. 28, and Friday, Nov. 29). For more information, phone 802-443-5007 or visit museum.middlebury.edu.