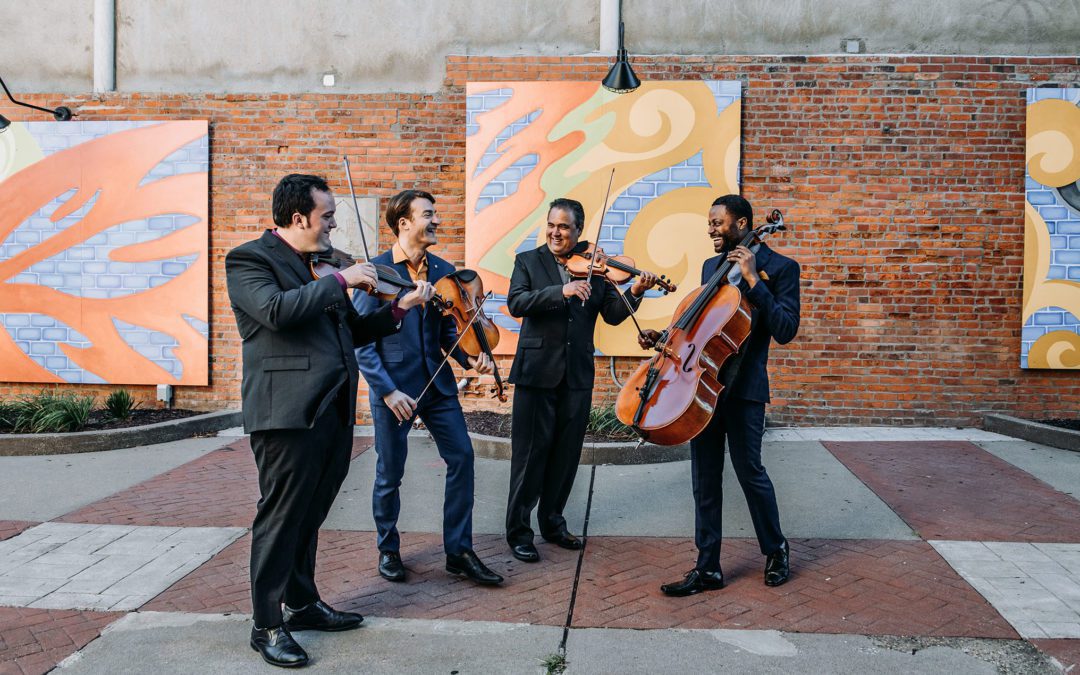 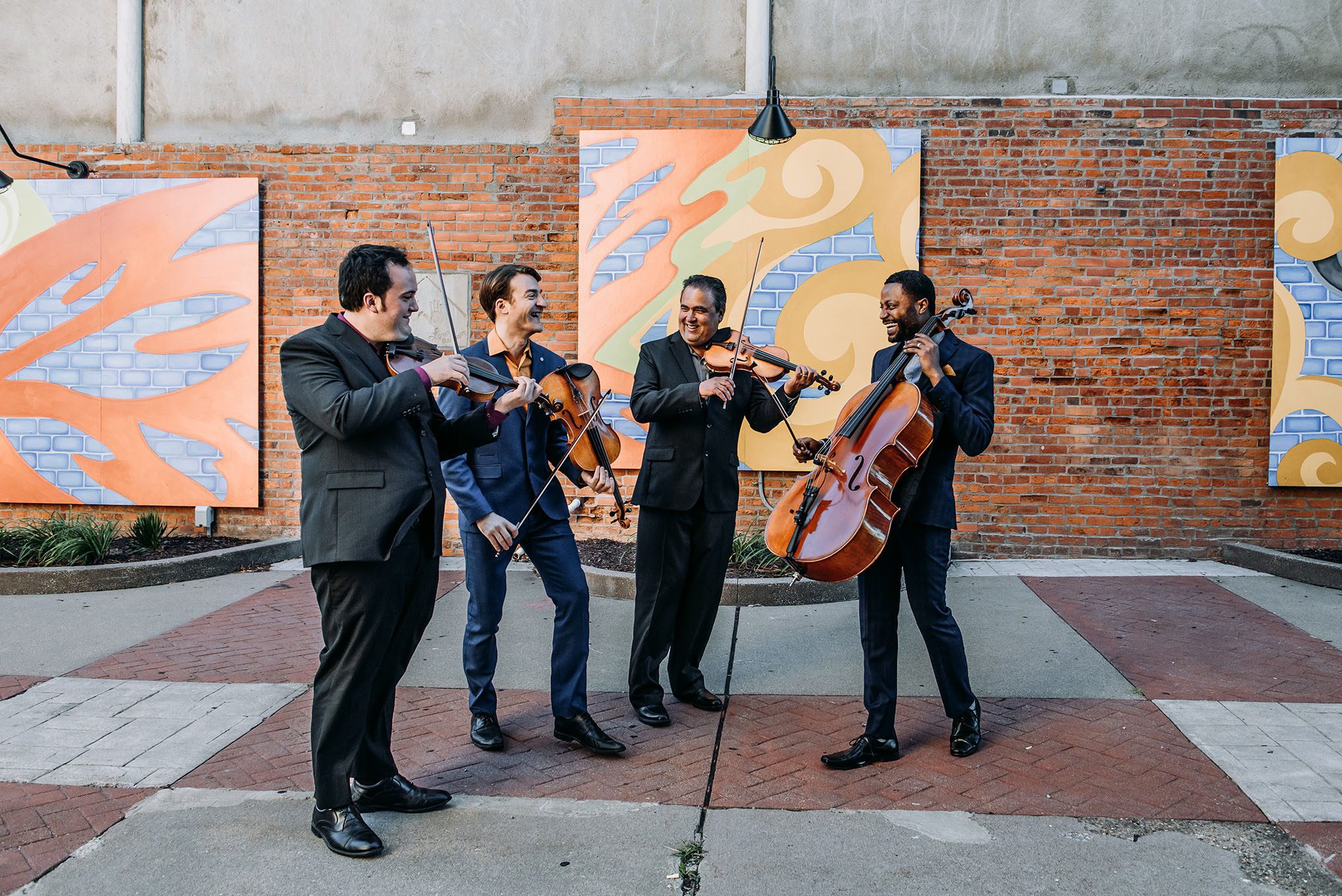 THE TURTLE ISLAND Quartet will play a collaborative jazz concert with pianist Cyrus Chestnut on Friday Nov. 22 at the Mahaney Arts Center.

MIDDLEBURY — The Grammy-winning Turtle Island Quartet makes its Middlebury debut at the Mahaney Arts Center on Friday, Nov. 22 in a collaborative concert with the Performing Arts Series’ most frequent jazz artist, acclaimed pianist Cyrus Chestnut. The performance will traverse countless colors of jazz in a program called “Carry Me Home.” The partnership is infused with the global reach of gospel and sacred music, ranging from the Appalachian Mountains to the spiritually defined musical landscape of J. S. Bach. This moving night of Duke Ellington, Bill Monroe, Bill Withers, Coltrane, and more also features the world premiere of Saint Paul AME, a new work by Middlebury College Assistant Professor of Music Matthew Evan Taylor. The piece was commissioned for the Performing Arts Series’ 100th anniversary season. The audience is invited to toast the artists at a free reception after the concert.
Performing Arts Series Director Allison Coyne Carroll was enthusiastic about bringing this concert to Middlebury.
“Cyrus has been a dear friend to the Series, beloved by our audience — his warm spirit comes through his playing,” she said. “When we found out he was touring with the Turtle Island Quartet, it was exciting… they cross the barriers between jazz, gospel, and classical music so beautifully.” Carroll went on to add, about composer Taylor, “…and Matthew’s work moves across genres and barriers too. It’s perfect!”
Turtle Island Quartet
Since its inception in 1985, the Turtle Island Quartet has been a singular force in the creation of bold, new trends in chamber music for strings. Two-time Grammy winner for Best Classical Crossover, Turtle Island fuses the classical quartet aesthetic with contemporary American musical styles. By devising a performance practice that honors both, they have redefined the state of the art. Cellist Yo-Yo Ma has proclaimed Turtle Island “a unified voice that truly breaks new ground — authentic and passionate — a reflection of some of the most creative music-making today.”
The quartet’s birth was the result of violinist David Balakrishnan’s brainstorming explorations and compositional vision, while writing his master’s thesis at Antioch University West. In addition to Balakrishnon, Turtle Island includes violinist Gabriel Terracciano, violist Benjamin Von Gutzeit, and cellist Malcolm Parson.
Turtle Island’s three decade journey has included forays into folk, bluegrass, swing, be-bop, funk, R&B, new age, rock, and hip-hop, as well as music of Latin America and India. They have released over a dozen recordings, and have been featured in soundtracks for major motion pictures, TV, and radio programs. In addition to their work with Cyrus Chestnut, Turtle Island has collaborated with legendary artists including clarinetist Paquito D’Rivera, guitarist Leo Kottke, The Manhattan Transfer, pianist Billy Taylor, singer Nellie McKay, the Ying Quartet, and the Parsons Dance Company.
Cyrus Chestnut
Composer, pianist and educator Cyrus Chestnut is a musical force, utilizing classical, Gospel, and jazz influences to entertain and capture his audiences. Chestnut started his musical career early, playing piano at his hometown church in Baltimore, Md., by age five. He went on to earn a degree in jazz composition and arranging from Berklee College of Music in Boston.
Chestnut honed his craft as a sideman with legendary musicians including Jon Hendricks, Michael Carvin, Terence Blanchard, Wynton Marsalis, Regina Carter, Chick Corea, Jimmy Heath, Isaac Hayes, Kathleen Battle, Betty Carter, Dizzy Gillespie and others. At the same time, he was also developing as a leader, recording, and playing live around the world. As a bandleader, Chestnut’s repertoire is vast and his work has been featured in films such as Robert Altman’s “Kansas City” (in which Chestnut also made his big screen debut portraying a Count Basie-inspired pianist).
With more than a dozen studio albums in his discography, Chestnut continues to experiment with the integration of jazz, spiritual and classical sounds that reflect his heritage and identity as an artist. His 2018 release, “Kaleidoscope,” features newly arranged jazz interpretations of classical pieces by Debussy, Ravel, Mozart and Satie. In 2014, Chestnut was appointed professor of Jazz Piano and Improvisation at Howard University in Washington, D.C.
Matthew Evan Taylor
Composer and professor of music Matthew Evan Taylor grew up in Birmingham, Alabama, and began playing the saxophone at age nine. He earned a bachelor’s degree in saxophone performance, and after a five-year stint touring as a founding member of Sony’s Moses Mayfield, he moved to Miami in 2009 to focus on composition, and to study at the University of Miami’s Frost School of Music. He received his Doctor of Musical Arts degree from the university, where he was also an instructor.
Taylor’s work has been performed by the Imani Winds, the Cleveland Orchestra, the Vermont Symphony Orchestra, and the Detroit Symphony Orchestra, among others. He began teaching at Middlebury in 2017, and has collaborated extensively across disciplines to create new work.
Learn more about Taylor’s work and his artistic process at a pre-concert lecture on Friday, Nov. 22, at 6:15 p.m.
Escape the cold this weekend and let the Turtle Island Quartet, Chestnut and Taylor warm you up with some new sounds on Friday, Nov. 22, at 7:30 p.m., in the Mahaney Arts Center’s Robison Hall, followed by a free reception. Composer Matthew Taylor’s pre-show talk will begin at 6:15 p.m. in Room 221. General admission tickets are $30 for the general public; $25 for Middlebury College faculty, staff, alumni, and emeriti; $10 for youth; and $6 for Middlebury College students, and are available at (802) 443-MIDD (6433) or middlebury.edu/arts.