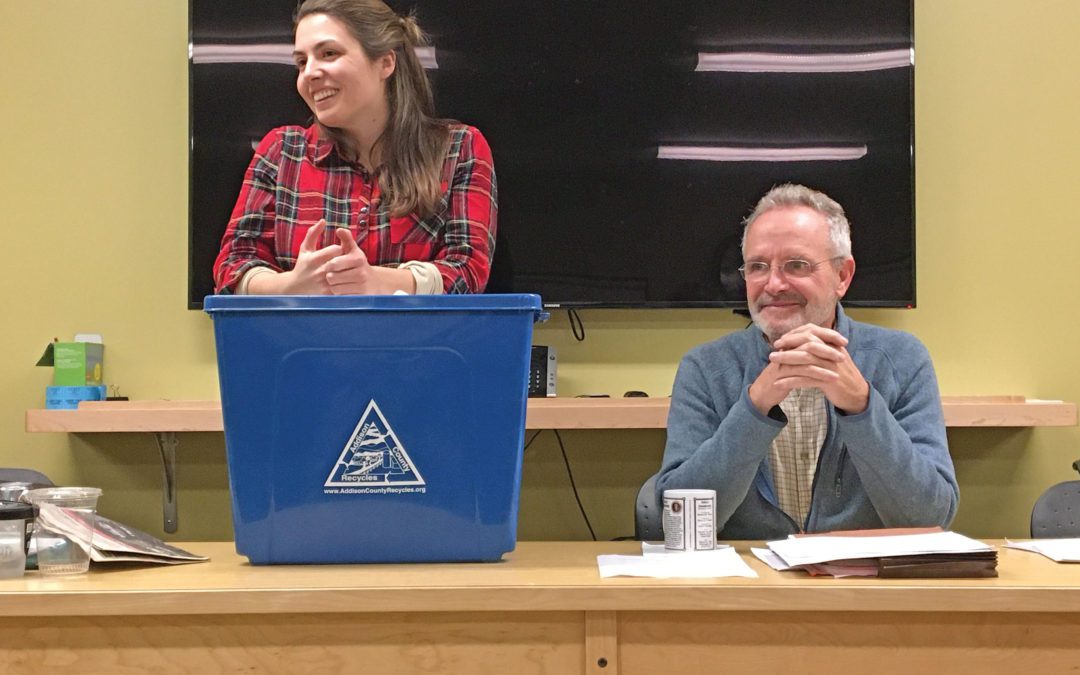 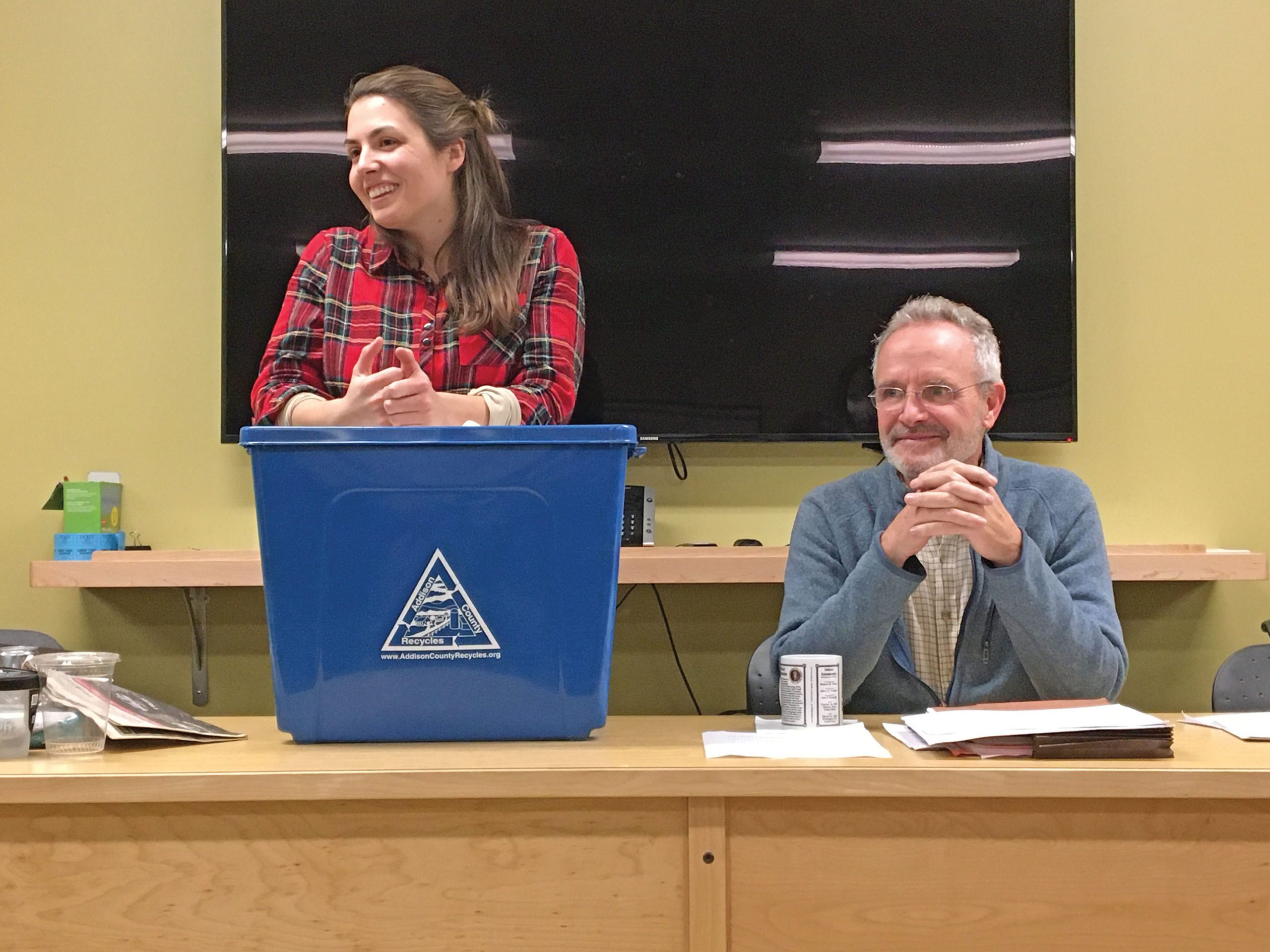 THE FUTURE OF recycling and the potential of an expanded bottle bill were among topics discussed at a special forum coordinated by the Bristol Democratic Committee on Monday. Addison County Solid Waste Management District’s Jessie-Ruth Corkins, left, and Sen. Chris Bray were the featured speakers.
By John Flowers

If we’re looking at zero waste as a goal and producer responsibility, then it really makes more sense to have a bigger, better bottle bill and have producers be responsible for what kind of bottles they use and how recyclable they are.
— Dave Sharpe

BRISTOL — Sen. Chris Bray, D-Bristol, wants the topic of recycling to get more discussion and action in the Legislature during the 2020 session that will begin in early January. And one of the vehicles for that discussion could be S.60.
A bill that Bray co-sponsored, S.60 is currently waiting to be taken up by the Senate Natural Resources & Energy Committee. Bray is chair of that committee.
The bill would greatly expand the Vermont’s bottle bill by:
• Adding water and wine bottles — as well as containers for most non-carbonated and carbonated drinks — to the list of receptacles subject to the state’s deposit-redemption system. The only excluded containers would be those holding milk, rice milk, soy milk, almond milk, hemp seed milk, and dairy products.
• Doubling the deposit on all beverage containers (except for those containing liquor) from the current 5 cents to 10 cents.
Bray believes extending the bottle bill to more containers, coupled with more diligent recycling, reuse and composting, will greatly help the state’s waste-reduction goals for a cleaner environment.
Vermont’s bottle bill went into effect in 1972 when it was touted as an anti-litter measure. Supporters reasoned people would be less likely to irresponsibly toss an empty can or bottle if they could get a nickel for it.
But over years, the bottle bill has evolved into a successful recycling program, according to a history of the measure found on the Vermont Department of Environmental Conservation website. The law currently covers bottles containing beer, wine coolers, and other malt beverages; liquor and spirits (since 1990); and carbonated non-alcoholic beverages — including sodas, sparkling waters and juices, and carbonated sports and energy drinks.
Beverages not covered under the bill have included wine, hard cider, non-carbonated non-alcoholic beverages, including water, milk, juice, sports and energy drinks.
Bray realizes a proposal to expand the bottle bill is likely to get some pushback from solid waste districts, bottlers, beverage distributors and others that could be affected by a major change in the waste stream and/or a jump in the price of products that would be affected by the legislation. He discussed S.60 as part of a larger conversation about the future of recycling held at the Bristol Fire Department headquarters on Monday. The conversation was spearheaded by the Bristol Democratic Committee.
Addison County Solid Waste Management District Public Outreach Coordinator Jessie-Ruth Corkins provided attendees with details on what they can and can’t recycle through the transfer station in Middlebury.
“Will we get better outcomes by assigning this dime price on top of all these goods?” Bray asked. “For me it’s still an open question. It’s a good question, but I don’t know the answer.”
That answer, according to Bray, will in part come through research into the state’s current recycling efforts. He noted the Vermont Agency of Natural Resources has formed a Solid Waste Working Group that is studying ways to troubleshoot and streamline the state’s recycling system.
“Before we contemplate a bigger system, we should sort out the current weaknesses in the system we have, and make it capable — if the analysis merits it — to bring more things into it,” Bray said. “Right now, there are almost 100 different sorts for bottles, depending on the type of glass and who the manufacturer is… It’s a system that’s become complex and burdensome to itself.”
Former Rep. Dave Sharpe, D-Bristol, is among those already sold on an expanded bottle bill.
“I was a big advocate for this in all my years in the Legislature,” Sharpe said. “It seems to me if we’re looking at zero waste as a goal and producer responsibility, then it really makes more sense to have a bigger, better bottle bill and have producers be responsible for what kind of bottles they use and how recyclable they are, and reduce the waste going to our landfills.”
Sharpe conceded S.60 would “create a revenue problem for our solid waste management people. And I understand some of them are actually against the bill because of that loss of revenue.”
The revenue problem comes about because solid waste districts would have less recyclable materials that they could sell to bulk recyclers.
Sharpe suggested some of the additional revenue raised by the higher deposit fee could be used to make up lost revenue for solid waste districts.
Bray added a portion of the extra revenue could pay for new equipment to help solid waste districts more effectively sort recyclables and accept new categories of containers.
Vermont has a stated goal of diverting 50 percent of its waste stream away from landfills by 2020, said Bray, who placed the current diversion rate at 37 percent. And come July 1 of next year, Vermonters will be forbidden to include food scraps in their trash.
“The perverse thing about having a stronger economy is that we’ve seen the volume of refuse grow,” Bray said. “People are buying more stuff.”
Adjusted for inflation, the original 1972 deposit of 5 cents should now be up 32 cents, according to Bray.
And that might not be a bad step to take, according to some who spoke up at Monday’s meeting.
“When it comes down to economics, that’s when change happens,” said Jono Chapin, noting how residents of Europe have become more dedicated to green energy in the wake of gasoline prices that are more than twice as high as in the U.S.
Reporter John Flowers is at johnf@addisonindependent.com.