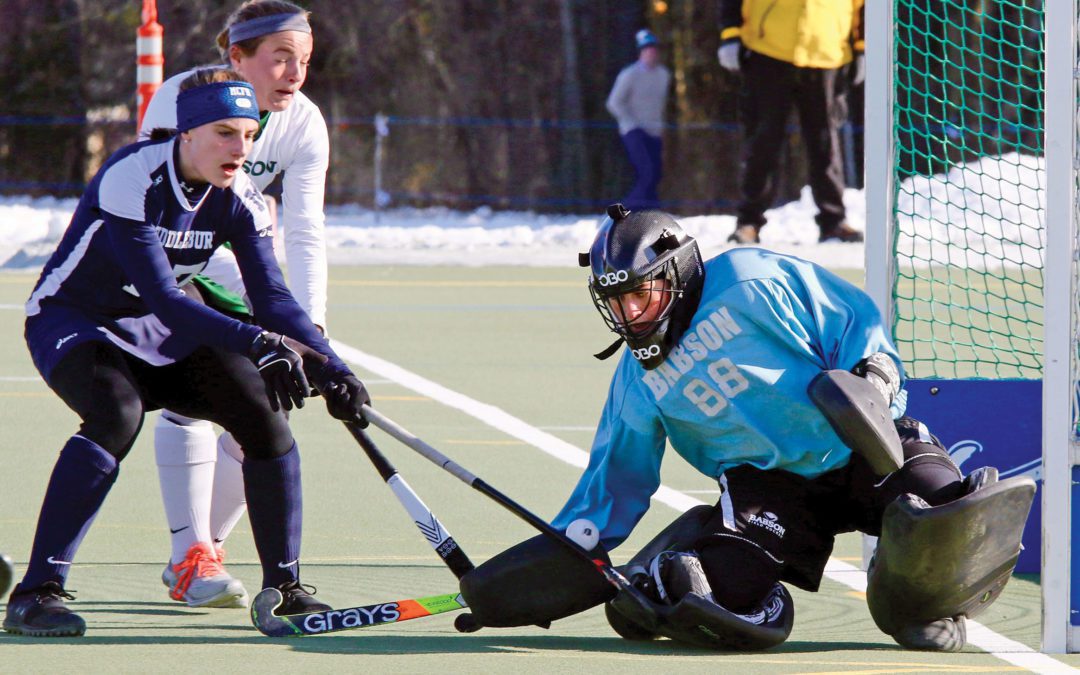 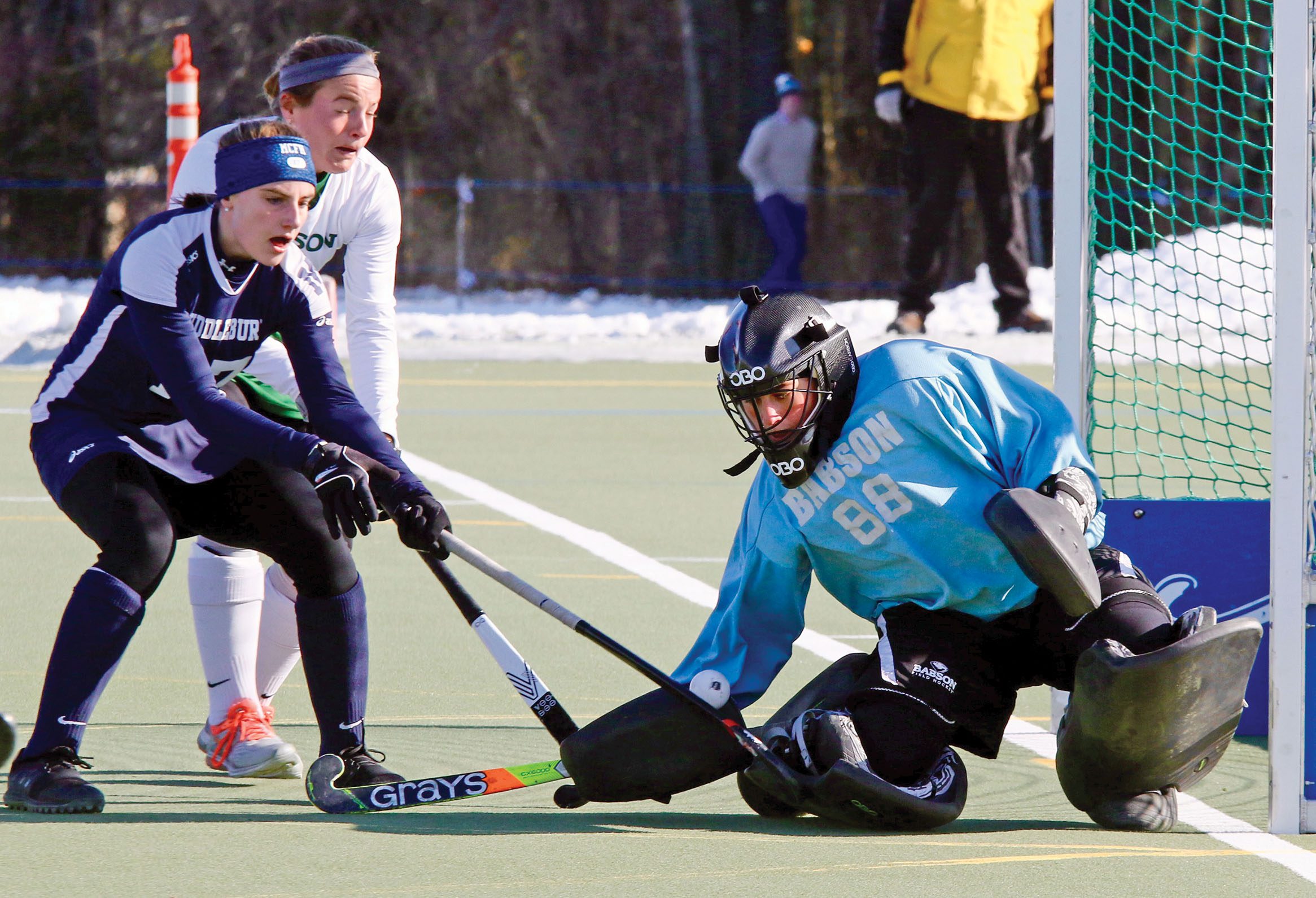 MIDDLEBURY — The Middlebury College field hockey team is going back to the NCAA Division III Final Four in Manheim, Penn., this weekend. There the Panthers will be trying to win the program’s third straight national championship, fourth in the past five years, and fifth overall.
The Panthers this past weekend, in an NCAA Division III Regional they hosted, defeated both Kean University in Sunday’s final, 4-1, and Babson College in Saturday’s semifinal, 2-1.
Middlebury Coach Katharine DeLorenzo also earned the 400th win of her collegiate coaching career this past weekend. Her record now stands at 401-126-2.
Next up for the second-ranked Panthers will be a 2 p.m. national semifinal on Saturday vs. No. 3 Salisbury (20-1). In the 11 a.m. game on Saturday No. 7 Franklin & Marshall (19-3) will meet No. 6 Johns Hopkins (19-2). Rankings date back to before league tournaments. The final is set for 1 p.m. on Sunday.
F&M upset undefeated No. 1 The College of New Jersey, while Johns Hopkins defeated No. 4 Tufts. Both of those wins came in overtime.
Results between common opponents suggest a competitive weekend in Manheim.
Middlebury and Salisbury have one common foe: Kean. Salisbury defeated Kean, 3-0, back in late August in the season opener for both programs. The Panthers outshot Kean, 17-4, in Sunday’s  4-1 win, while the Gulls outshot Kean, 13-6.
Middlebury and Franklin & Marshall have no common foes. Johns Hopkins just edged Tufts, which reached the NCAA final a year ago. Middlebury played Tufts twice this season, defeating the Jumbos at home in the NESCAC final, 3-2 in overtime, while the Panthers’ only loss came at Tufts in the regular season, 1-0.
Johns Hopkins’ record also includes a 2-1 win over Franklin & Marshall and a 2-1 loss to Salisbury.
This past Sunday’s NCAA Regional final vs. Kean (19-4) was not close, however, as the Panthers took charge with three goals in the first period.
Middlebury freshman Katie George, the NESCAC rookie of the year, made it 1-0 41 seconds into the game with her team-leading 12th goal. George put home the rebound of a Julia Richards shot.
Six minutes in defender Meg Fearey made it 2-0 with another rebound goal, this one coming on a penalty corner. Fearey tucked the ball inside the left post after Kean goalie Belly Reynoso stopped Emma Johns’ initial bid.
Three minutes later forward Marissa Baker made it 3-0 with a high shot from just inside the top of the circle, with Richards assisting. It was Baker’s seventh of the year.
Kean pressed and earned two penalty corners shortly afterward, but the Panther defense held. The Cougars’ best chance to score in the opening half came 2:05 into the second quarter, but Panther keeper Grace Harlan denied Melissa Way on a breakaway.
Early in the third quarter George hit the right post, but the Panthers soon made it 4-0 due to a foul on the play and an ensuing penalty corner, Johns fired the ball home at 4:20 of the period after a series of passes.
Kean got on the board 4:21 later when Ja’Carra Jackson batted home an aerial pass from Peyton Mann into the right side of the cage.
Harlan finished the contest with two saves, Belly Reynoso made nine stops for the guests. The victory was the Panthers’ 36th straight win at home and their 10th straight in NCAA play.
Babson (19-5) gave the Panthers more trouble on Saturday with an early goal and tough defense.
Babson took a 1-0 lead just 6:56 into the game on a goal from Vermont native Maddy Paro, daughter of former Mount Anthony Union High School Coach Laura Paro.
A strong diagonal pass from the left side caused a scramble in the Panther goalmouth. Paro picked off an attempted clear on the right side of the circle before rapping a 25-foot shot just inside the left post.
Middlebury’s Erin Nicholas, the NESCAC Player of the Year, tied the game with 5:25 remaining in the second quarter with her 11th goal of the season. On a penalty corner, Nicholas found space near the penalty stripe, cut to her right, and flicked a high shot back into the left side.
The Panthers scored the eventual game-winner with eight seconds remaining before halftime. Baker made a strong move to the right end line and served a hard ball to the middle that Babson goalie Cassidy Riley (two saves) blocked, but not out of Richards’ reach. Richards one-timed it over the sprawling goalie.
The second half was a defensive struggle, with Babson earning substantial possession, but being unable to penetrate the Panther back line to get another shot off on Harlan. The Beavers also disrupted the Panthers, although Middlebury had a chance to increase its lead with seven minutes remaining, only to see Nicholas hit the left post with a penalty stroke
The Panthers finished with advantages of 8-1 in shots and 3-1 in penalty corners.