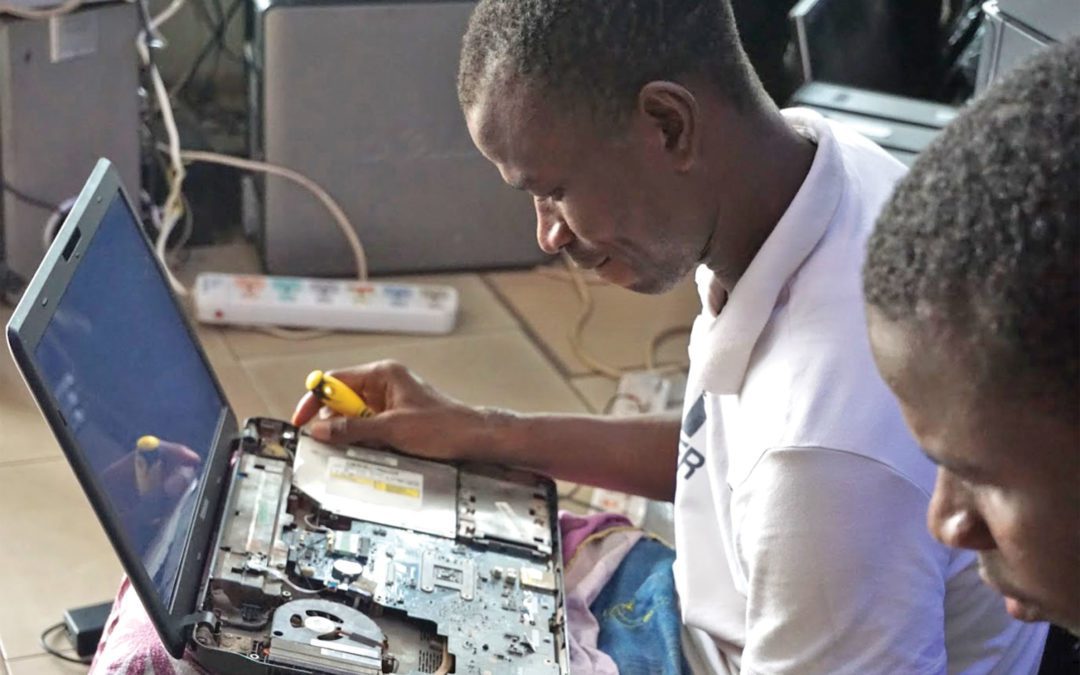 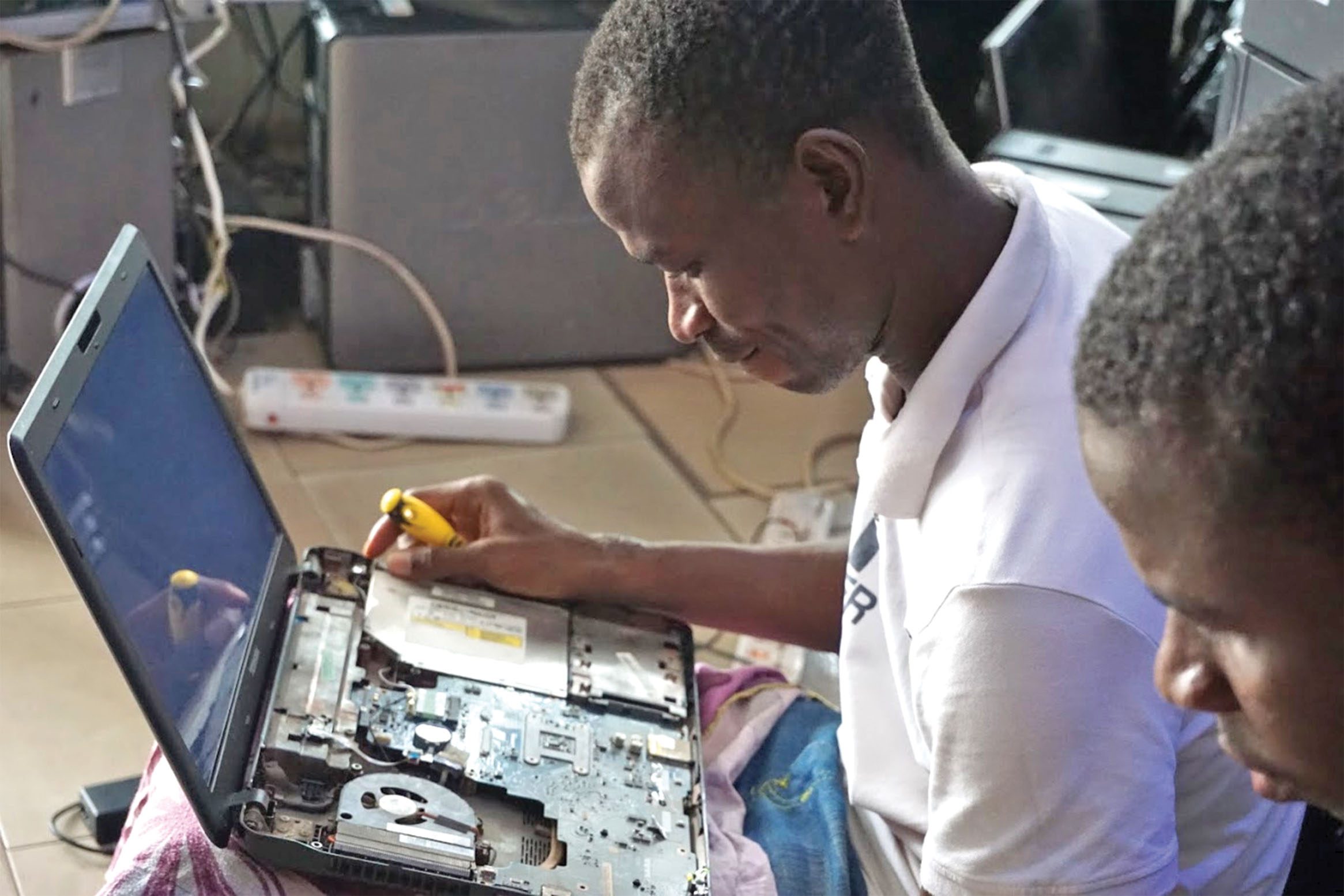 The best thing you can buy is a rich person’s broken things.
— Robin Ingenthron’s grandfather

MIDDLEBURY — Author Adam Minter will travel a thousand miles for a good recycling story. And for his latest book, Minter racked up significant frequent-flyer miles from Middlebury to China and ports in between, in his effort to shine a light on worldwide efforts to extend the life of our prized possessions and thus stem the tide of waste into landfills.
Minter’s book is called “Secondhand: Travels in the new Global Garage Sale.” It explores, among other things, our practice of accumulating clothing, electronics and other stuff, and what happens to that stuff when we are finally ready to part with it. “Secondhand” follows those myriad items on their respective paths to reuse centers, shops, and sadly, landfills.
Minter needs little introduction to those committed to the principles of recycling and reuse as a means of reducing the world’s waste stream. He received much acclaim for his first book, “Junkyard Planet: Travels in the Billion Dollar Trash Trade.” In that tome, Minter traces the export of America’s junk and the profits that China and other nations are reaping from it.
Minter, a columnist for “Bloomberg Opinion,” currently resides in Malaysia, after having lived in Shanghai, China, for 12 years (until 2014). He has thus enjoyed easy access to worldwide recycling hubs in Asia and beyond. Work on “Secondhand” took him to Japan, India, Ghana, Benin, Malaysia, Canada and multiple U.S. states — including Middlebury, Vt., where Minter consulted with Robin Ingenthron, founder and CEO of Good Point Recycling.
Good Point is one of the region’s leading recyclers of electronic waste, including computers and flat-screen TVs. The business practices “fair trade recycling,” and the refurbished electronics generated by Good Point have earned a worldwide market — including in emerging nations where many people can’t afford to buy brand-new.
Ingenthron and his company receive numerous mentions in Minter’s “Secondhand.” The pair met each other online in 2010, when Minter began corresponding with Ingenthron about the waste electronics scene in China.
“I had a blog at the time, and Robin started leaving comments on the blog,” Minter recalled. “That led to an email correspondence and meeting at some conferences. And eventually, in 2015, he invited me to accompany him on a business trip to Ghana. I got to come along and there were no ground rules or anything. He said, ‘Come and see what’s going on.’ So I did.”
The trip allowed him to clear up a major misconception in e-waste circles — that loads of computers were coming into Ghana from the U.S., and that the devices were simply burned after being mined for the tiny amount of precious metals used in their manufacture.
“Yes, there are junkyards in African cities and Chinese cities,” Ingenthron said through an email for this story. “But the stuff in the junkyards is 20 years older than the stuff being imported by geeks of color, and the crazy assumption that Africans are buying computers to burn them for a few pennies of copper is basically racial profiling.”
True to Ingenthron’s take, Minter found a country replete with self-made techs busy repairing electronic devices that could then be sold at a bargain to the masses.
“You have to go there and really spend time with people who do the business in order to understand what’s really happening,” Minter said.
An avid globetrotter, Minter likes to get close to his subject matter.
“I like to actually see the stuff up-close; I don’t want to rely on someone else’s reporting on it — especially in the case of electronics,” he said. “If you rely on a lot of other reporting, you’re going to get an incorrect story. You’re not going to understand what’s actually happening — especially in Ghana.”
He said the U.S. and other industrialized nations could learn a lot from Ghana, when it comes to recycling.
“One of the buzzwords now is, ‘circular economy’ — the idea that instead of a linear economy, where you dig something out of the ground, use it, and then toss it back into the ground, we want to keep using and reusing these things,” he said. “And the best way to reuse things in the most sustainable way is to literally fix them, retrofit them and make them last longer — and then recycle them. Recycling has a bigger environmental impact than reuse. If you go to Ghana, that’s what you see: Computers and monitors. That stuff goes there and it’s refurbished and cleaned up. If parts are available, they’re used to fix these things and make them work longer. It’s something we don’t do.”
He cited cell phones as a prime example of an electronic device that has too-limited a lifespan in affluent countries.
“In the U.S., when the battery in your phone dies, you go and get a new phone,” Minter said. “Replacing the battery in a phone is nothing in Ghana. You can go there and see people replacing chip sets off of motherboards within phones to keep them going longer. That’s something we don’t do, but it’s possible. If they do it over there, we should be able to do it here in the U.S.”

RECYCLING ROADBLOCKS
Minter urged the U.S. and other affluent nations to remove legal roadblocks to recycling. For example, Apple has copyrighted its iPhone to the extent that it would likely sue anyone who might publish repair information.
Europe, Minter added, has laws that “very much restrict exports of electronics to emerging markets, and I think that’s a mistake. It not only inhibits the flow of stuff that could be used longer, but is also deep and structural racism.”
The solution, Minter believes, is a “Right to Repair Law.” He was pleased to report that around 20 U.S. states are considering one.
The law has two fundamental provisions according to Minter:
• That companies make all the repair documentation publicly available, either online or through printed manuals.
• That companies make repair parts available to anyone, and not just their “authorized” repair stores.
A Right to Repair Law would empower people to fix their electronics, thus extending their life span and reducing intake at landfills, Minter believes.
Minter said Middlebury’s Good Point allowed him to make two major points in “Secondhand.”
“One, is the importance of repair to sustainable economies,” he said. “The people who repair things aren’t always the folks behind the genius bar. The people who do the most repair and have the most incentive to do it are those who have less, who might be low-income.”
Minter was particularly struck by something Ingenthron learned from his grandfather: “The best thing you can buy is a rich person’s broken things.”
The expression, Ingenthron said, stemmed from his grandfather’s observation of how “Ozarks hillbillies would learn what went wrong with cars, how to fix it, and then buy the ‘broken’ cars from richer people in St. Louis, Chicago and Memphis before the rich had figured out how to fix it. I recognized Africans doing the same during my 1984-86 sejour (Peace Corps) in Cameroon, and started Good Point Recycling with my best friend from Cameroon, Yadji Moussa.
Tragically, Moussa drowned in Otter Creek seven years ago.

DENYING PEOPLE OF COLOR
The Good Point-Ghana experience also allowed Minter to see racial prejudice within the reuse economy.
“The fact of the matter is… trade in secondhand goods — whether it’s clothes or sofas or computers — tends to go from affluent people to less affluent people,” he noted. “And in the world we live in, affluent tends to mean ‘white’ and ‘less affluent’ means ‘people of color,’ especially on a global trading platform.”
Reuse laws and news coverage have through the years perpetuated this narrative, Minter noted.
“The practical effect of those sorts of stories and those rules and laws is to deny people of color in emerging markets access to material goods,” he concluded.
Asked what message he’d like readers to take away from his book, Minter replied, “I want people to think about the racial prejudices that underlie a lot of the coverage of this industry, especially electronics and clothing waste. And I also want people to think about their own consumption. For me, the most educational part of the whole reporting process was going into homes after people had moved out — usually elderly people — due to downsizing or death, and seeing how much of the stuff they had accumulated through the years is worthless, that nobody wants. It made me realize that most of what I buy is only of value to me — and probably not for very long.
“The process of writing the book has made me rethink my consumption,” he added. “And if I succeed with this book, I hope it convinces other people to rethink theirs, too.”
Reporter John Flowers is at johnf@addisonindependent.com.