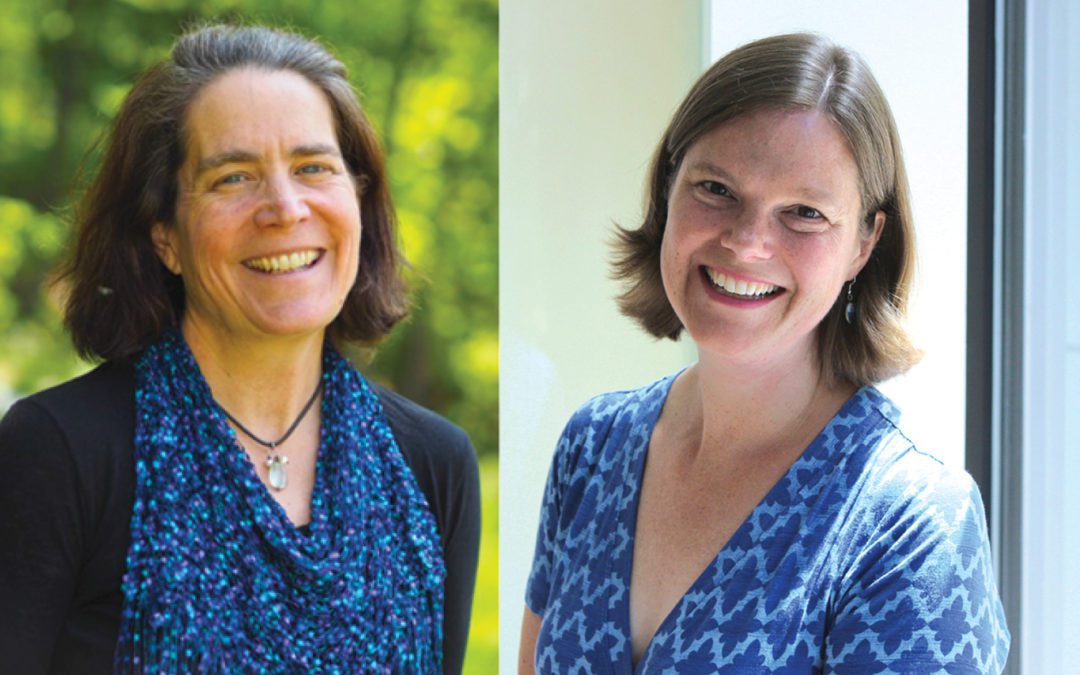 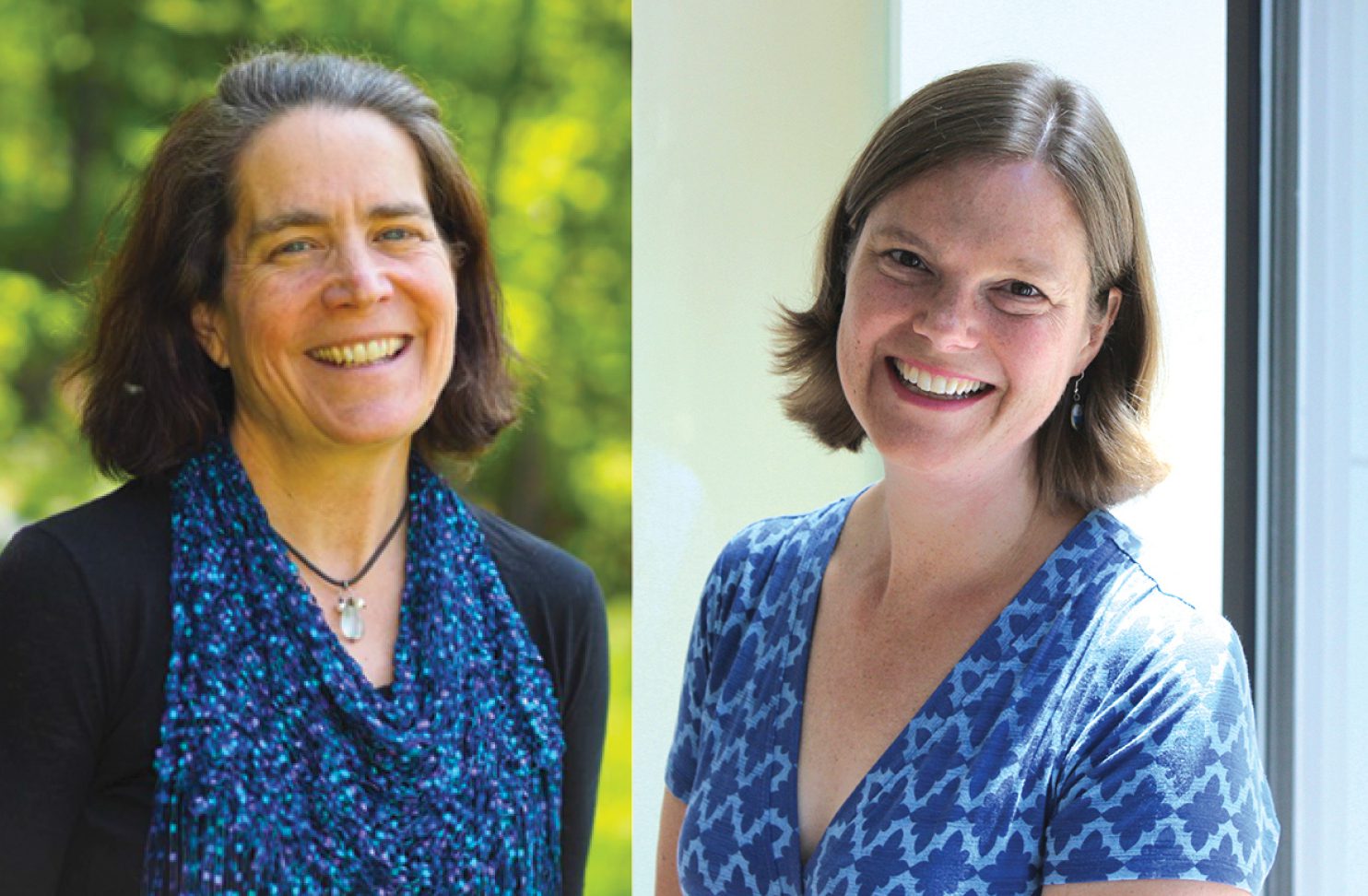 STATE LEGISLATORS, INCLUDING Rep. Amy Sheldon, left, and Sen. Ruth Hardy say they will be having a conversation about what ‘control of your hunting dog’ means.
By Christopher Ross

Editor’s note: This story is third in a series. The first, “Bear-hunting hounds attack hikers and pup,” was published on October 31, 2019; the second, “Bear-hound attack shocks hunting community,” was published on November 7, 2019. On November 26, 2019, Christopher Ross spoke to VPR’s Mitch Wertlieb about this story during Morning Edition; click here to listen.
VERMONT — State lawmakers have promised to scrutinize the laws that regulate hunting bear with dogs.
This comes after a pack of bear-hounds attacked a couple and their leashed puppy on the Catamount Trail in Ripton last month; the puppy and the hiker trying to protect it required emergency medical care.
“Any time something happens that’s as dramatic and problematic as this, we need to take a pause and look at our current system of oversight,” said Sen. Ruth Hardy (D-Middlebury) in an interview with the Independent. “I don’t want to suggest that bear-hound hunters aren’t following the rules, but I think it’s reasonable to look at our regulations.”
Rep. Amy Sheldon (D-Middlebury), who chairs the House Committee on Natural Resources, Fish and Wildlife, is not convinced that the current bear-hound rules are adequate.
“There’s room for improvement,” she told the Independent. “We (lawmakers) will be having a conversation about what ‘control of your hunting dog’ means. We need to have a way of bringing justice (to incidents like this).”
Wayne Newton, the owner of the bear-hounds involved in the Ripton incident, has been charged with a criminal violation of 10 App. V.S.A. § 7.63a, which reads, “A person shall not take black bear with the aid of dogs unless the person is in control of the dog or dogs.” Newton has been fined $262, with a five-point penalty on his license.
In messages to the Independent, Newton was thoughtful and apologetic, but he declined to comment on the record.
Fish and Wildlife Commissioner Louis Porter told the Independent in an Oct. 31 phone conversation that the incident was “completely unacceptable.”

DEFINING ‘CONTROL’
According to the Vermont statutes that govern bear-hound hunting, “Control of Dog/Dogs” means “the transportation, loading or unloading of dogs from vehicle(s); the handling, catching, restraining or releasing dogs; and the use of telemetry/GPS to locate or track dogs.”
The list is meant to include the activities associated with bear-hound hunting where control is required, Fish and Wildlife General Counsel Catherine Gjessing told the Independent.
The Independent asked several people familiar with bear-hound hunting to explain how hunters know when they have control of their dogs, and what happens when they realize they no longer have control.
Butch Spear, president of the Vermont Bearhound Association, said he uses GPS to track his dogs, though he acknowledged that his dogs can sometimes get as far away as three or four miles.
Mark Scott, Director of Wildlife for the Fish and Wildlife Department, said it’s up to bear-hound hunters to ensure they have control of their dogs, but Fish and Wildlife doesn’t prescribe any method.
“The reality is that you almost have to go out and hunt to understand how hounds are controlled,” he said. “Tracking is a tool, but ultimately the behavior of a dog is up to people.”
Scott trains bird dogs, he said.
“You spend a lot of time developing them into good ones. It’s a lot of fun. I enjoy the training more than the hunting.”
When asked about the basis for determining whether a hunting hound is well-trained, Scott said one would have to ask the dog owners themselves.
Still, hunters may not always know if their bear dogs are chasing something other than bears, he acknowledged.
The same seems to hold true for other kinds of hunting hounds.
“Some rabbit-hound hunters will wait until the snow is deep and the deer have cleared out before they start hunting, to keep their dogs from chasing after deer,” Scott said.
According to Lt. Justin Stedman, a state game warden supervisor, it’s up to dog owners to police their animals, which can be tricky.
“These dogs don’t operate within the vision of hunters,” he told the Independent in 2016, referring to dogs that are legally used to hunt coyote and bear. “The dogs can cross posted land. That’s something that can cause issues.”
Dogs can’t read, he added.

‘NO VIOLATION’ CONCLUSIONS
According to bear-hound complaints made to Fish & Wildlife and records of their investigation obtained by the Independent through the Freedom of Information Act, Wayne Newton is the only hunter in the past five years who has been cited by the Vermont Fish and Wildlife Department for not having control of his dogs.
In fact, those documents show Newton is the only Vermont resident in the past five years who has been cited with any violations of the bear-hound rules.
Still, many Vermont residents are complaining — to Fish and Wildlife, to their representatives and to wildlife protection groups and to their local newspapers.
“Hounds still not reading posted signs and large-tract landowners still not happy about it,” wrote one state game warden in a 2015 weekly report.
The following week it was the same.
“Landowner of very large piece of prime bear habitat very upset that bear hounds aren’t reading and respecting his posted signs.”
Some of the conflict has arisen from the fact that while bear-hound hunters are prohibited from traversing legally posted land, it’s not considered a violation when their hounds do it.
“Apparently, landowners who have reported such incidents … have been told that this is not illegal and there is nothing a landowner can do about it,” a Newbury resident wrote to Sen. Joe Benning (R-Lyndonville) earlier this year. “It is extremely disappointing as a property owner to know that, despite one’s best efforts at responsible, science-based and careful stewardship of the natural resources and wildlife present on one’s property — and the outlay of money that often goes along with those management efforts — it can be so easily undermined and run roughshod over by (bear-hound hunting activities) that are at odds with a landowner’s management objectives…. Why on earth do I pay a small fortune in property taxes — along with the many and varied other costs of managing the property — if I am to have ZERO control over what happens to my land?”
Benning passed the complaint on to Commissioner Porter.
“As for hounds going on legally posted property, it is true that in Vermont domestic animals going on such property is not a violation of the law,” Porter replied. “This is true for bear dogs and also true for cows, pet dogs and other domestic animals.”
The Independent emailed Porter for clarification of his comparison of cows with packs of trained hunting hounds, but Porter did not respond before deadline.
FOIA documents from the past five years are littered with such complaints — and similar responses from Fish and Wildlife officials — leading many to wonder just how much control hunters can actually have over their hounds.
“I feel like giving up,” wrote a Greensboro resident in 2017. “I just cannot see why they cannot respect our wish and stay away from our house with their hounds.”
In separate letters and emails, the resident detailed nearly 20 years of struggles with hunting dogs, during which she had caught and returned 23 hounds.
Maj. George Scribner, Deputy Chief Warden at Fish and Wildlife, sympathized.
“I appreciate your frustration more than I can convey in words or a note,” he replied. “When I was a field warden I was considered sometimes by peer(s) as a little too aggressive in enforcing our Title 10 Laws and Regulations and if there was anything at all that could be done regarding this behavior it would be done.”
That same year, then-Sen. Clair Ayer (D-Addison) forwarded a similar complaint to Commissioner Porter. In an email reply to Ayer, Porter explained that Fish and Wildlife typically asks hunting associations to reach out to those responsible when there are people who are not treating landowners with respect.
“I do not know of a legislative solution, unless the use of dogs for hunting were to be banned,” he wrote. “Even then, non-hunting dogs would be likely to cause the same issues if they were loose.”

OTHER ATTACKS
Last week, after the Independent published the second article in this series, “Bear-hound attack shocks hunting community,” an out-of-state reader contacted the paper.
“I’d like to contradict some of the quotes used in the article which imply that hound hunting attacks never or rarely happen to hikers and pets,” wrote Kadie Anderson, who lives in Washington state. “My dogs and I were the victims of a prolonged (bear) hunting dog attack (in 2014 in North Carolina) that caused extensive injuries to my dogs and (me).”
Anderson later forwarded a document outlining 15 similar incidents around the country, and internationally, including:
•  In 2004 in North Carolina, according to the Citizen Times, a pet black lab was sitting on its owner’s porch when several hunting dogs crossed onto the private property and attacked it.
•  In 2015 in Michigan, according to 9&10 News, two bear-hunting dogs, which were in training, ran into the yard of a private residence and mauled a pet Chihuahua to death.
•  In 2017 in West Virginia, according to the Mineral Daily News Tribune, a bear-hound wearing a tracker peeled off from its pack and attacked a pet Dachshund on property that was legally posted. The bear-hound owner said he could tell from the GPS reading that the bear-hound had entered the posted property, but pointed out he didn’t have permission to go and retrieve it.
Anderson’s document also detailed landowner and hunting-dog-owner conflicts and incidents involving abandoned hunting dogs.

UNDER THE RADAR
Sometimes lost hunting dogs simply go unreported.
Rep. Sheldon, who lives near the Green Mountain National Forest, has encountered several such dogs. With only one exception she’s found them friendly.
“I’ve been joined by hunting hounds on hikes with (my dog) Cassie,” she said. “One time they walked with us for two or three miles. We liked them. Eventually they picked up a scent and split.”
Wildlife Director Scott said that in the past he has picked up lost bear-hounds from the side of the road.
Such incidents are common enough to have inspired a viral Facebook post, which offers helpful advice to the public during hound-hunting season.
“Our dogs that are on the side of the road are not lost,” the post reads. “That collar with the antenna sticking up is a GPS tracking device that allows us to see where they are on a satellite map on a handheld device we have in our hands. It picks up miles away!”
The post encourages motorists who encounter a hunting dog in the road to slow down — and to avoid communicating with it.
“It’s busy looking for a track and will be gone again in a few minutes. If it isn’t, we will find it. Leave it alone.”
Reach Christopher Ross at christopherr@addisonindependent.com.