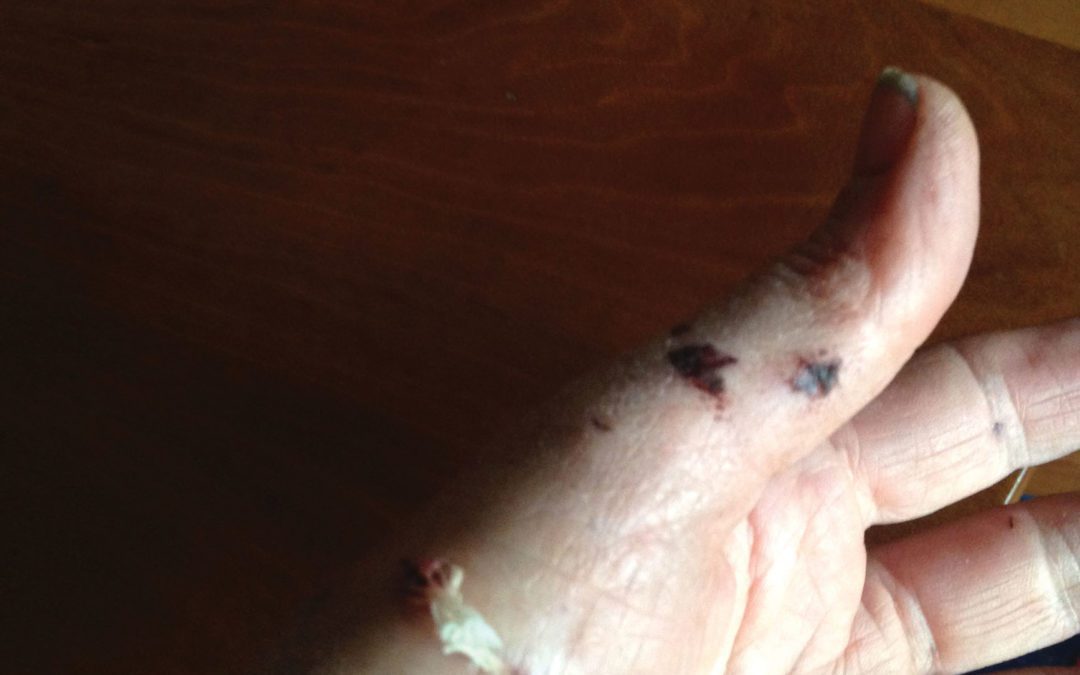 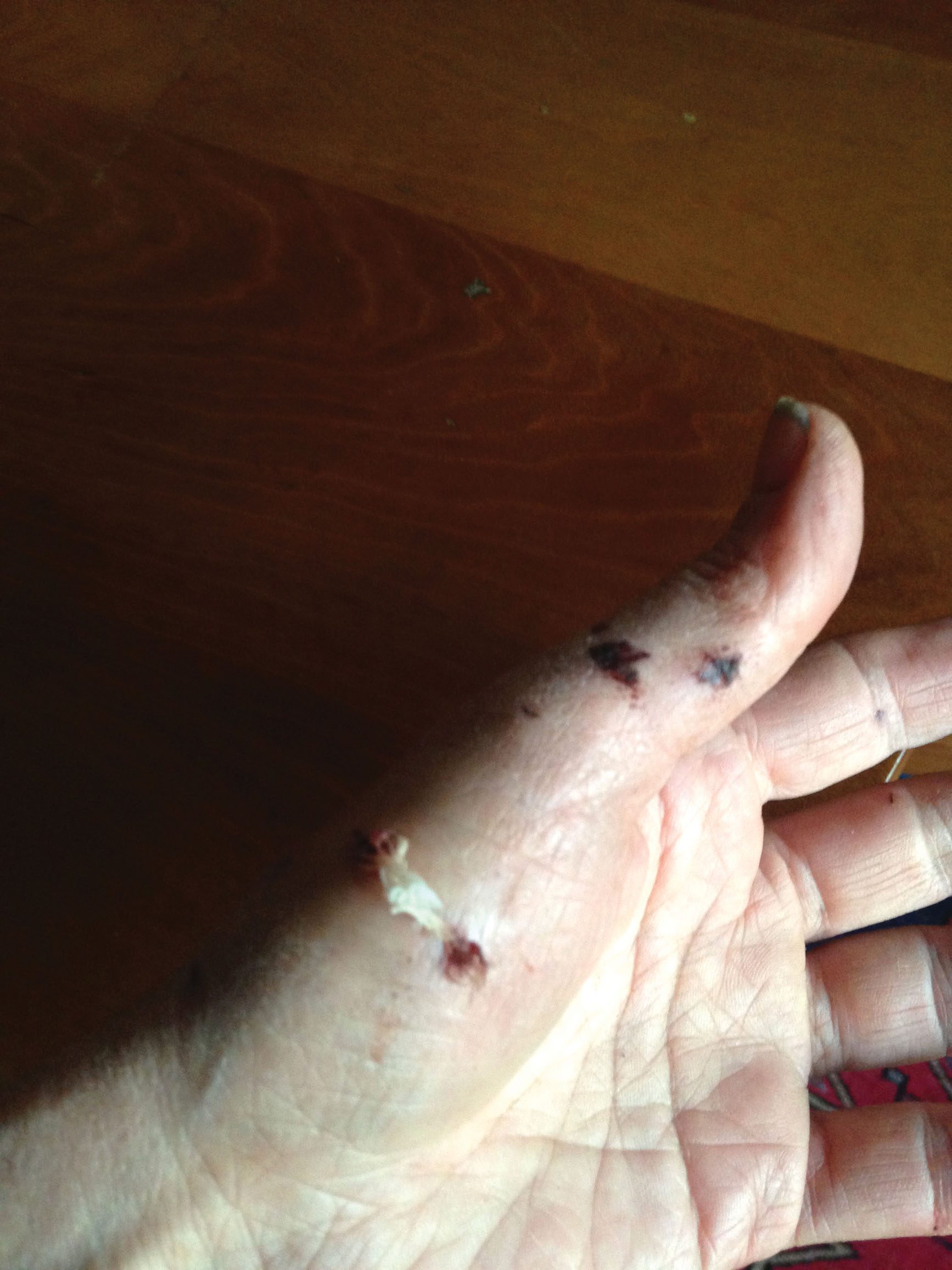 MERYL SIEGMAN’S HANDS show some of the puncture wounds she suffered while shielding her puppy from an attack by bear-hunting hounds in the Green Mountain National Forest near the Ripton-Goshen border earlier this month.
By Christopher Ross

This isn’t about hunting — or guns or animal rights. It’s about control of your animals.
— Kevin Harper

RIPTON — On Saturday, Oct. 19, around mid-day, a pack of bear hunting dogs attacked two hikers and their puppy on the Catamount Trail in the Green Mountain National Forest near the Ripton-Goshen border.

Former Ripton resident Meryl Siegman, 65, and her husband, Ron Scapp, 64, who have been hiking in the area for more than 30 years, had completed roughly one-quarter of their intended walk when they heard barking, they told the Independent.

“Almost instantaneously we were swarmed by five dogs,” Siegman said.

Scapp described them as “big hound dogs, in the 60- to 80-pound range, wearing GPS collars.”

The couple had been aware that it was hunting season.

“We’re always running into hunters on the trail and we’ve encountered people with hunting dogs before,” Scapp said. “Usually they’re on a scent trail. But these dogs attacked immediately.”

The couple would later discover that the pack was owned and deployed by Brandon resident Wayne Newton.

The Independent reached out to Newton on Monday and Tuesday, but did not connect with him in time for this story.

According to Scapp and Siegman, the hounds immediately attacked the couple’s seven-month-old puppy, Willow, a 27-pound poodle-Wheaten terrier mix, which was on a leash.

“This wasn’t playful puppy stuff,” Siegman said. “They were going for her like she was prey.”

Siegman picked Willow up and tried to shield the puppy with her hands.

“And one of (the hounds) grabbed (Willow) by the tail and pulled and pulled, and the other dogs were jumping on me and they knocked me down, right into a creek,” she said.

Scapp, who was carrying a buck knife and a Swiss Army knife but felt reluctant to use them at that time, tried to fend the hounds off with a canister of bear spray.

He remembered seeing Siegman get pulled down into the ravine.

“I just remember this horrible feeling seeing (Meryl) there in the water with blood on her face,” he said. “I couldn’t tell if she’d been bitten in the face or the eye or what. I felt totally helpless.”

It would turn out that the blood on Meryl’s face had come from her hands.

The couple screamed for help, but no one answered, they said.

“Ron was trying to get the dogs off of us and I was holding on to (Willow) for dear life because I knew that if I let go (the hounds) would have destroyed her,” Siegman recalled. “I really thought for quite a while that we were not going to survive this.”

Scapp finally managed to drive off the largest dog, whose name they would later learn was Zeus, with the bear spray.

But when Siegman stood up the hounds regrouped, circled her and pulled her down again, she said.

“The second attack on Willow was worse,” she recalled. “It was prolonged. They were pulling on her, refusing to let go.”

Later, through a mix of tears and laughter, Scapp described to the Independent two versions of himself in that moment.

“On the one hand I felt like one of these characters like the Terminator or Iron Man, scanning my surroundings and calculating distances,” he said. “On the other hand, I felt like a Jerry Lewis character, a clown. I was trying to pick up rocks that were too heavy to throw.”

While deploying the bear spray with his right hand, Scapp managed to pick up a rock with his left hand, he said. Then, as he reared back to hurl it at one of the hounds, he unintentionally struck another one, which was attacking him from behind.

“I whacked him right in the snout,” he said.

Siegman doesn’t remember how it happened, but she discovered a culvert nearby, shoved Willow into it, then stood in front of the opening to block the hounds from it.

“I was bleeding profusely from both my hands,” she said. “And all this time I was screaming at the top of my lungs, hoping that the hunters would hear us.”

Still no one came, they said.

Then it occurred to Scapp to command the hounds.

“I stood up tall and screamed COME! NOW!” he said. “I commanded them to follow me, so I could get them away from my wife.”

“I managed to walk about a quarter-mile and to get all of them to follow me, though at times I wasn’t sure if they were following me or stalking me,” he said.

When Scapp paused on the trail, the dogs seemed as if they might drift away. But when Scapp tried to return to Siegman, the dogs turned around, too, and charged toward her again.

“I was screaming,” he said. “I felt a profound sense of despair and desperation, and I thought: This is where they kill us.”

Scapp recalled feeling in that moment that he might have to engage in close-quarter combat with the hounds.

“I thought I was going to have to go in with both knives and start cutting throats,” he said. “But I honestly didn’t think I was going to win that fight.”

Then, as the couple recalled it, they heard a voice on a ridge.

The entire incident had lasted at least a half-hour, they said.

According to Siegman and Scapp, a member of Wayne Newton’s hunting party was the first to show up at the scene, followed later by Newton himself.

Newton apologized, the couple said, and his hunting party helped them get back to their car.

Scapp and Siegman drove back to Starksboro, where they had been staying with friends Kevin Harper and Julie Herr.

“Ron looked pale and I immediately saw that something was wrong,” Harper told the Independent.

Scapp explained to Harper what had happened and then Harper saw Siegman and Willow, he said.

“Meryl’s hand was chewed up and her gear was bloodied, and the puppy was beside her, looking distressed. It’s a furry black dog, so you couldn’t really see the extent of the injuries.”

At Porter, Siegman was treated for puncture wounds on her hands. She said there are more than 20.

“My wedding ring had to be cut off in the emergency room,” she said.

Siegman declined to get a rabies shot because, she said, Newton had assured the couple that his bear-hunting dogs were registered, which required up-to-date shots.

According to the veterinary report Siegman shared with the Independent, the extent of Willow’s wounds could not be evaluated until she was sedated.

Once her fur was clipped away, veterinarians found multiple wounds, including a large puncture wound to the left of her vulva and a large deep laceration on her right perineum.

Vets suggested the latter wound would need additional surgical evaluation as it heals.

Willow was expected to undergo that evaluation on Oct. 31 with Scapp and Siegman’s veterinarian back at home in New York City.

On the night of the attack, Scapp and Siegman called the Vermont Fish and Wildlife Department and were put in touch with Central District game wardens Dale Whitlock and Wesley Butler.

“They were both amazing,” Scapp said. “They did better trauma work for victims than a psychologist would have.”

The Independent contacted both game wardens for comment. Butler did not respond in time for this story.

Whitlock said he interviewed the couple in Harper and Herr’s home the day after the attack.

“He was absolutely professional,” Harper recalled. “He was considerate, attentive, supportive and understanding.”

In an Oct. 26 phone interview with the Independent, Whitlock said that the “case against the dog owner isn’t settled,” so he could provide only limited comment.

“I’ve been a game warden since 1996 and I’ve never seen anything like this,” he said. “This was clearly a traumatic and painful incident for Ron and Meryl. And I believe they are telling the truth.”

Whitlock said he planned to submit his report to the Addison County state’s attorney “as soon as possible.”

As grateful as they were, however, Scapp and Siegman said that after their interview with Whitlock they were left with the impression that neither the actions of the hunters or the dogs had broken any laws.

Rep. Amy Sheldon, D-Middlebury, is chair of the House committee that oversees fish and wildlife. She said she was aware of this incident and is exploring ways to update hunting rules.

Her understanding was that “hounding regulations do not require proximity … of your dogs. … Bear hounds are allowed to chase all kinds of wildlife regardless of the season or what their intended goal is.  The practice by its definition seems to depend on the dogs having free reign of the woods.”

To date, according to Lt. Justin Stedman at Fish and Wildlife, Newton has been cited to appear in Addison County Superior Court on Dec. 9 to answer to a criminal violation of Title X, Appendix 7 of the Vermont statutes, which regulates bear-hunting dogs.

Neither Stedman nor Whitlock specified the exact charge, citing outstanding paperwork, but Scapp and Siegman had the impression that it had to do with improper registration.

Where such Fish and Wildlife cases are concerned, the process for answering to such a charge is similar to how speeding tickets are handled, Stedman explained.

Newton will have the option of paying a fine before the court date, in which case the hearing would be canceled.

“I don’t view Wayne Newton as a villain in this situation,” Scapp said. “This is not a hiker vs. hunter kind of thing. But we were being terrorized by these dogs.”

Ultimately, he said, he felt like the state of Vermont and its vaguely worded laws are at fault.

“I have no issues with hunting,” he said. “We don’t post our land, and we have hunters all the time and have never had a problem. But this isn’t about hunting — or guns or animal rights. It’s about control of your animals.”

Siegman hopes that this will never happen to anyone else.

“It was horrible,” she said through tears. “I think the trauma is going to last a really long time.”
Reach Christopher Ross at christopherr@addisonindependent.com.
Editor’s note: In coming editions the Independent will look more broadly at the practice of hunting with dogs and talk with lawmakers and others about how it is and could be regulated.


UPDATE: After this story was published, Vermont Fish and Wildlife Commissioner Louis Porter informed the Independent that Newton has been charged with a criminal violation of 10 App. V.S.A. § 7.63a, which reads, “A person shall not take black bear with the aid of dogs unless the person is in control of the dog or dogs.”
According to Vermont statutes, “Control of Dog/Dogs” means “the transportation, loading or unloading of dogs from vehicle(s); the handling, catching, restraining or releasing dogs; and the use of telemetry/GPS to locate or track dogs.”
Newton has been fined $262 for the violation, with a five-point penalty on his hunting license.