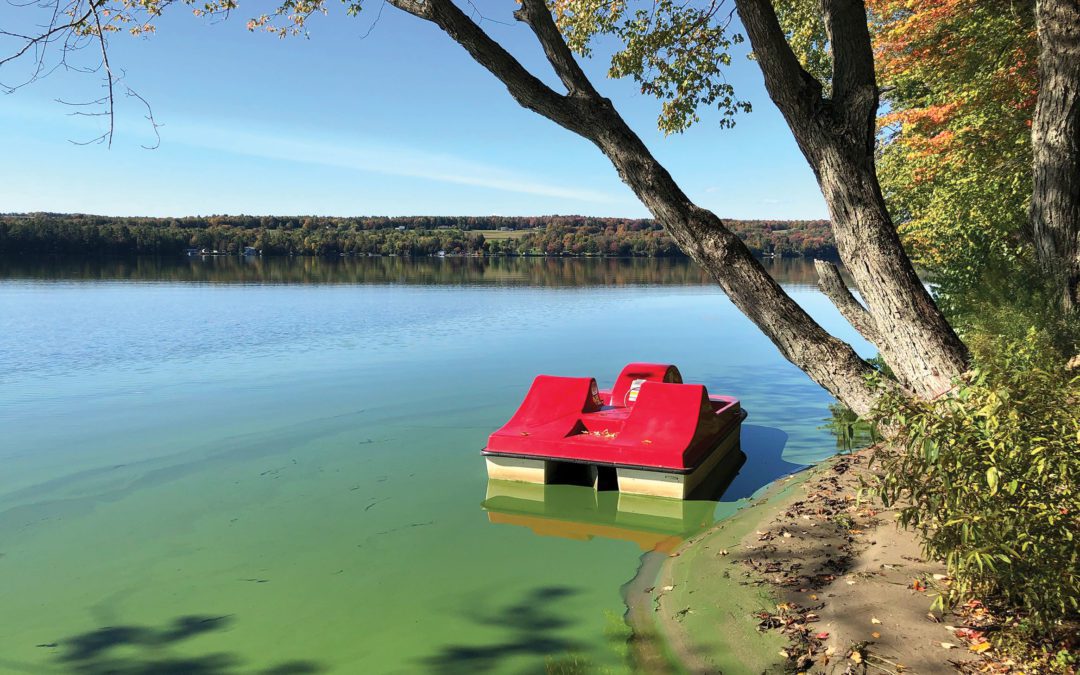 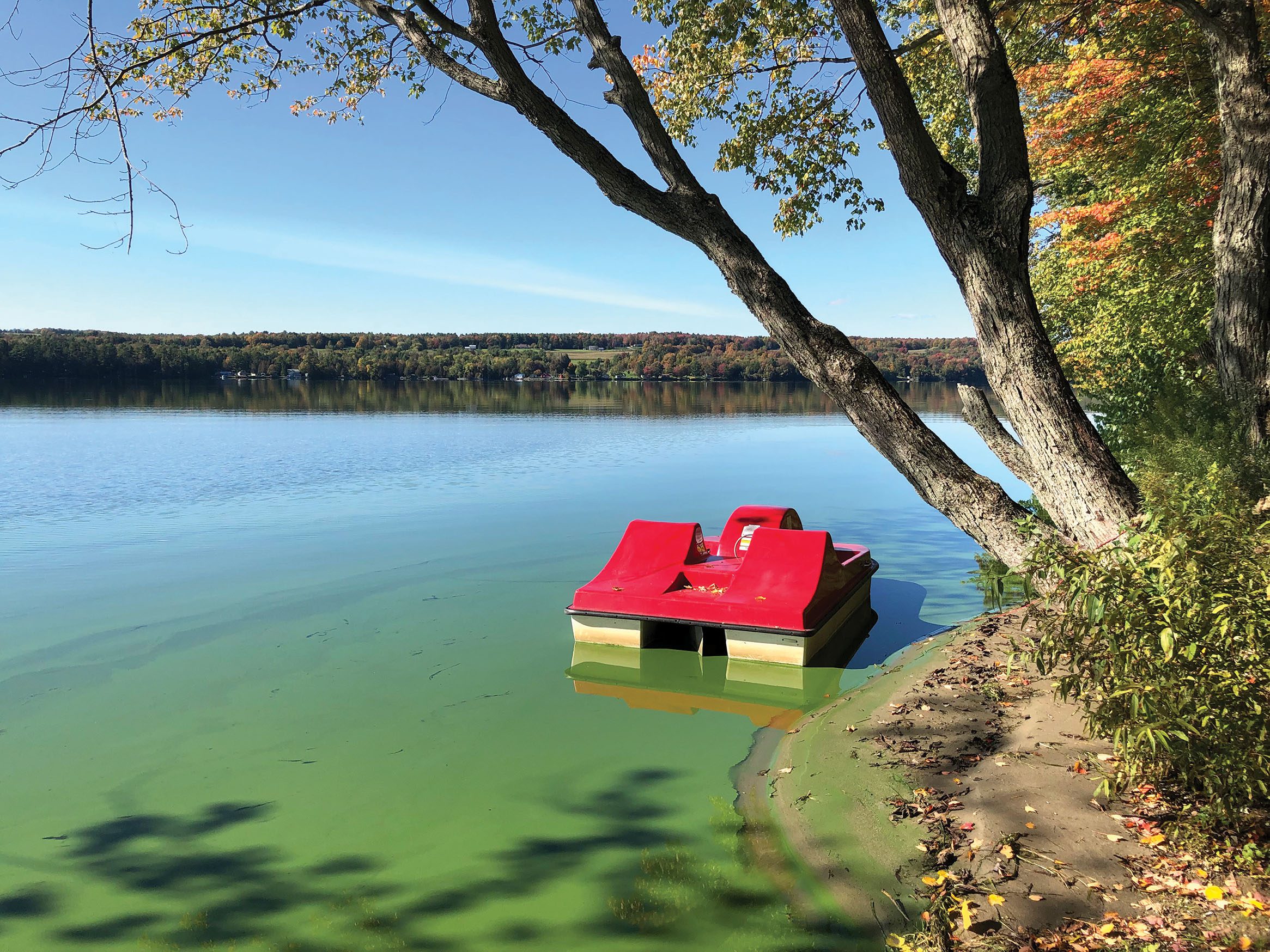 A BEAUTIFUL FALL day on a Vermont lake was marred by toxic blue-green algae that sat in a thick smear on top of the water.
By Matt Dickerson

The end of our hundred-yard walk carrying our canoe from the parking lot to the lake ended in something between disgust and dismay when we looked down into the water. The surface of the lake looked nothing like water. It appeared more like green paint — like a bucket of latex ready to be spread on the side of a house. We couldn’t have seen a rock half an inch below the surface, it was so thick and opaque.
Neither my wife nor I had any interest in setting our canoe down on top of it, risking getting whatever it was on our sandals or skin or even on our beautiful golden canoe. But neither did we want to give up on canoeing. It was a gorgeous October day: a near-perfect autumn afternoon in terms of both the weather and peak foliage. So we continued walking the shoreline another hundred yards, looking for a thinning of the green coating or anything more inviting of a paddle.
Eventually we got out past a beach area onto a small point and saw that a few yards out from shore the green did thin out somewhat. Deborah suggested the substance further out looked less like paint and more like water coated with the pine pollen as we’ve sometimes seen on New England lakes in June — only now it was green rather than yellow and it was thicker.
Still somewhat squeamish, we nonetheless slid the canoe out into the lake and got in, avoiding skin contact with the water as well as we could. The paddle was beautiful. The sky hung over us a powdery blue with soft brushstrokes of clouds. The temperature had risen from a morning low in the upper 30s to 60 or a little over that — warm enough that I soon ditched the sweatshirt. And the shoreline. The shoreline! Also the adjacent hills. They were of the sort that make Vermonters disdainful of all other states, and make flatlanders crowd our backroads every autumn causing traffic jams at the Middlebury rotary: the perfect mix of golden, orange and red, with pastel-shaded touches of magenta, peach, salmon and purple.
For a while, we paddled the lake admiring the foliage, gazing at gulls soaring over the water surface in search of food, and watching (and listening to) one of the largest (and loudest) flocks of Canada geese I have ever seen migrate past us. For the most part, we ignored the tint of the water that, away from shore, had turned from opaque latex green to a more powdery semi-opaque aqua. Though we still tried to keep it off our hands.
Then we came upon the bubbles — a big circle of them, almost as long as our canoe, boiling up from somewhere deep below like a kettle of simmering soup or a just-opened can of over-carbonated lime soda. We circled them for several minutes trying to figure out what was causing the phenomena. Just about as we decided to paddle onward, no closer to solving the mystery, we saw another bubble patch. Then another. Over the next 20 minutes of paddling, I counted more than a dozen scattered around the center of the lake.
At this point readers of this column more knowledgeable than I am, and more aware of Vermont news, have probably figured out where this story takes place. Perhaps you had it figured out by the end of the first paragraph and are shaking your heads at my lack of knowledge.
Deborah and I had driven close to two hours, almost to the Canadian border, to attend a wedding. Looking at a map and realizing the wedding was less than five miles from a lake we had never paddled in a state park we had never visited, and seeing a perfect weather forecast, we had strapped the canoe onto the car in the morning. Early afternoon, when the reception started to wind down, we’d skipped over to Lake Carmi State Park, punched our park passes, and made our way down to the shoreline.
The substance in the water was blue-green algae. Deborah even wondered if that’s what it was when we first saw it. Though we’d read about it, we’d never see a bloom like that before. It didn’t look how I imagined an algae bloom would like. Besides, I thought, we had just driven to the gate of the state park with a canoe on our roof, and asked the park attendant how to get to the boat landing with the obvious intent of paddling. Surely if the lake were that thick with a toxic blue-green algae, the park attendant would have warned us. Or we would have seen signs. We received neither of those warnings. So when we got to a spot where the green thinned to a powdery pollen-like substance, we (wrongly) convinced ourselves it must be something other than toxic algae.
Only on our way out of the park when we stopped back at the gate to ask about the bubbles and green slime were we told that the park and lake association had put 40 air compressors under the water to combat blue-green algae. He then also explained that the algae was very toxic: potentially deadly if ingested, and even harmful just to touch. We should avoid contact, he said. Several dogs had died from swimming in it.
With that sobering knowledge, we drove off, stopping first chance we could to wash our hands. Later we ran the car — with the canoe still on the roof — through a car wash.
We both survived, of course. My eyes were irritated for about a day and a half, but it might have had nothing to do with the blue-green algae. Deborah even commented, and I agreed, that it was sort of a good we hadn’t been warned. Had we known the lake was full of toxic algae, we almost certainly wouldn’t have gone for a paddle. And we would have missed one of the most beautiful days of the year.