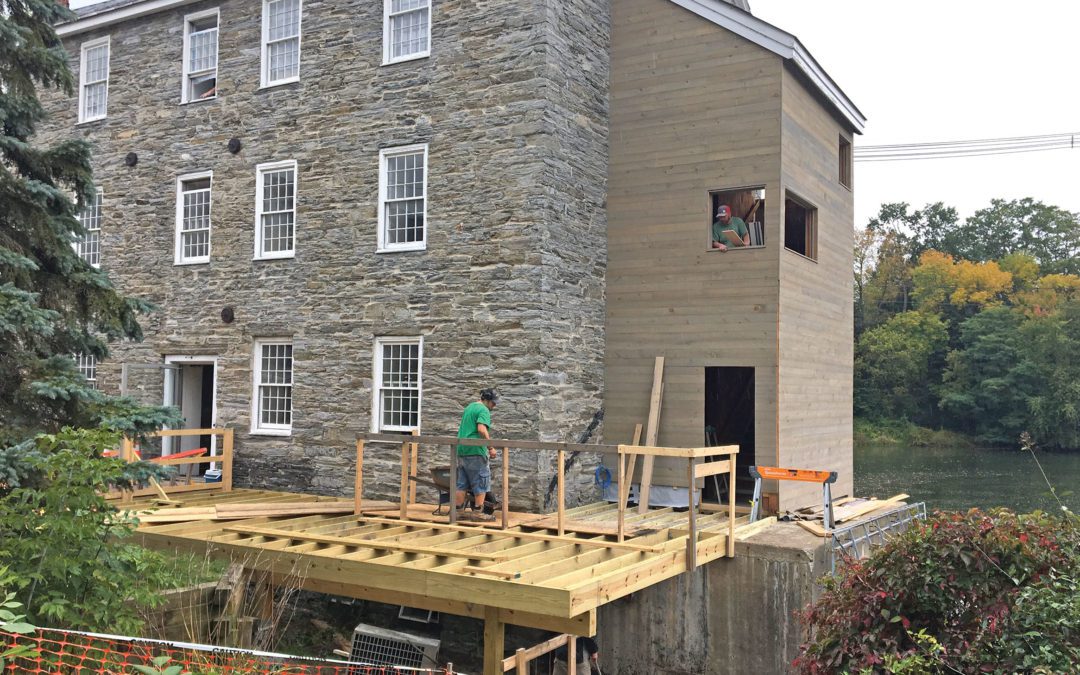 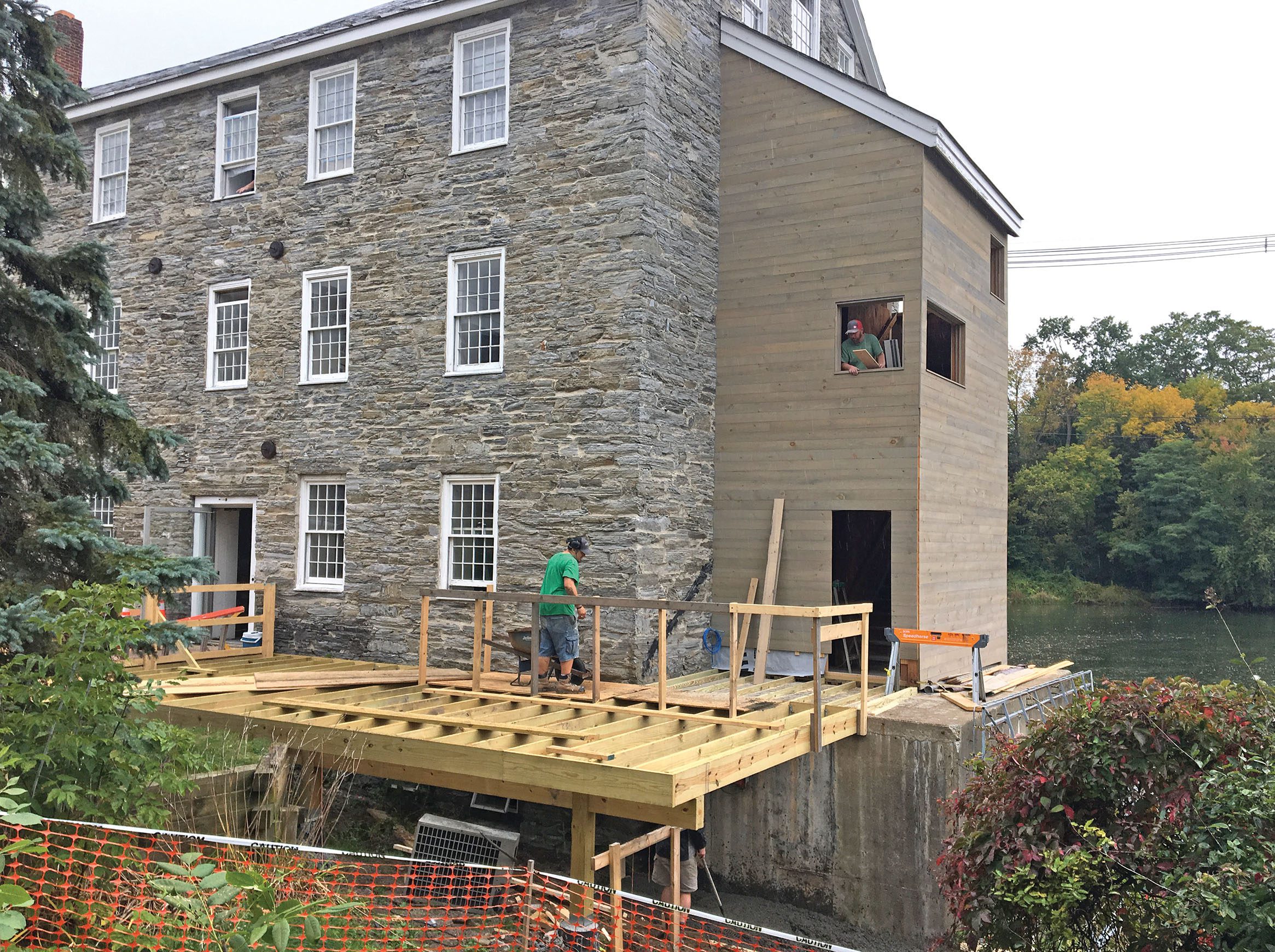 WORKERS LATE LAST week frame a new outdoor deck at the Stone Mill building in Middlebury’s Frog Hollow, which by the end of October will host retail, restaurant, office and lodging services for locals and visitors.
By John Flowers

MIDDLEBURY — Extensive interior renovations to Middlebury’s Stone Mill building are nearing completion, with current plans calling for the historic Mill Street structure to open its menu of businesses, workspaces and lodging — and the Mad Taco Restaurant — by the end of October.
Business partners Mary Cullinane and Stacey Rainey of Community Barn Ventures sat down with the Independent on Thursday to discuss the latest news on the Stone Mill, which they acquired late last year from Middlebury College. They’re investing considerable time and expense in making the building a downtown hub for local shoppers and tourists alike.
As previously reported by the Independent, the Stone Mill will include the restaurant on the first floor, retail and office spaces on the second and third floors, respectively, and a handful of lodging units on the fourth and fifth floors.
In early August, Rainey and Cullinane announced Mad Taco and two anchor retail tenants: Dedalus Wine and Slate Home. Dedalus began as a small backroom wine shop with a dozen or so selections and now carries hundreds of wines at its headquarters at 388 Pine St. in Burlington. Slate, based at 89 Church St. in Burlington, offers a variety of home, kitchen décor, lifestyle and stationery products produced by “ethical and sustainable vendors,” according to its website.
On Thursday, the two partners added to the list of confirmed retail tenants for the public market, which includes some familiar names. The Vermont Book Shop — an iconic store headquartered at 38 Main St. — will have a spot. So, too, will Middlebury College. As will Royal Oak Coffee, based at 30 Seymour St., which will open a second location in the mill called “Lost Monarch.”
Rainey and Cullinane will use one of the first-floor spots for “The Stone Mill Collection.” Cullinane said the space will offer products in three main categories. “Things that celebrate, things that help us think and things that we like to eat,” she said.
The partners have mapped out a tentative floor plan that shows the individual retailers’ spaces, along with a general seating area, accessible restrooms and a central checkout area for purchases.
All floors will be served by a new elevator.
The second floor will feature two private offices for rent, a general seating area (for up to 30 people) for people to set up individual work stations, and a conference room. Also featured are a kitchenette, restrooms, two phone booths and a printer/scanner station.
A manager will staff the general seating area. It’s one of several new full- and part-time jobs the project will create in Middlebury.
Community Barn Ventures is looking to make the workspace affordable. They’re charging $125 per month for a general membership and $500 and $750 in monthly rent for the two private offices. Those prices are all inclusive, according to Rainey.
Three lodging suites of varying sizes will be located on the fourth floor, which will include a common sitting area.
The fifth floor will offer a single, large lodging suite that will boast great views of the Otter Creek.
Rainey said Mad Taco and the public market are scheduled to open Oct. 25. The office and lodging spaces are slated for a Nov. 1 unveiling.
“It’s been a lot of fun to pull it all together, and now we’re dealing with a lot of details and preparation,” Rainey said.
Community Barn Ventures has applied for federal and state tax credits through the Downtown and Village Center Tax Credit program. It’s a program designed to stimulate private investment, create jobs and restore historic buildings — specifically in Vermont’s designated downtowns and village centers.
Gov. Phil Scott on Wednesday confirmed Community Barn Ventures had been awarded $180,577 in tax credits for a project valued at $1,503,907.
The partners have applied for tax credits to partially defray costs of three big-ticket items in the Stone Mill renovation: The elevator, sprinkler system, and code compliance work related to electrical, plumbing and ADA.
“If you can demonstrate you’ve invested in these categories (elevator, sprinkler system, code upgrades), you receive a percentage of your investment back, in the form of a tax credit,” Cullinane explained. “That tax credit can then be sold to either banks or insurance companies that have a state tax burden. They then buy that credit from you, use the credit to offset their tax liability, and then we receive those funds in cash.”
Rainey and Cullinane hope to hear within the next week or two if their project has qualified for the tax credits.
Reporter John Flowers is at johnf@addisonindependent.com.