UPDATED: Lincoln DRB chair resigns over comments he made 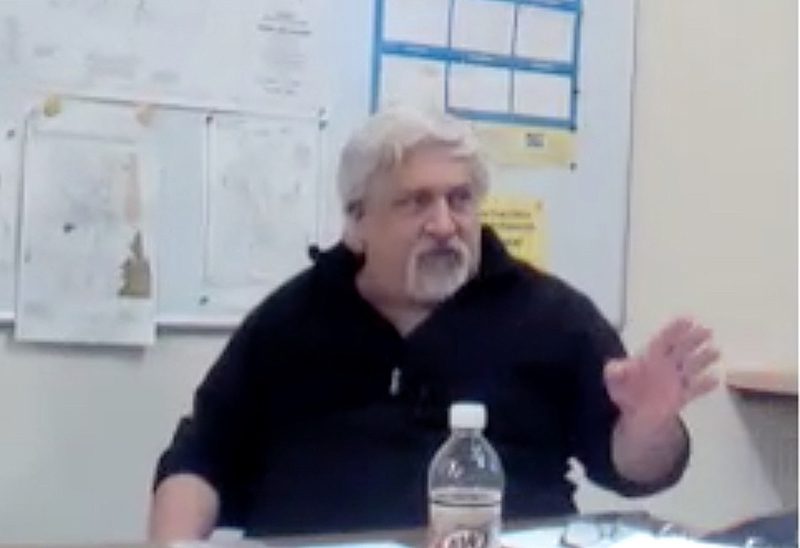 UPDATED: Lincoln DRB chair resigns over comments he made

CHAIR BRIAN FRAZIER gestures at a Jan. 4 Lincoln Development Review Board meeting in this Zoom recording. Frazier resigned his post on Friday over some comments he made at the gathering.

LINCOLN — A town board responsible for reviewing land use that varies from what is allowed in Lincoln’s zoning rules is going through some growing pains.

Last Friday, Brian Frazier resigned from his position as chair of Lincoln’s development review board — a board that was just formed this past summer and is already charged with hearing a contentious request for an aircraft landing strip in town.

Frazier’s resignation followed a Jan. 9 request made to the selectboard by Burlington attorney Claudine Safar that Frazier step down due to comments he made at a Jan. 4 development review board (DRB) meeting.

Safar is representing Lincoln resident Marilyn Ganahl in ongoing hearings regarding a conditional use application filed by Kyle and Katie Clark for a grass aircraft landing strip at the Clarks’ Lincoln residence. Former Lincoln zoning administrator Ann Moreau-Kensek issued Clark a permit to build the landing strip with a 1,500-foot grass runway on his 130-acre property in March 2022.

Ganahl appealed the decision to issue that permit based on concerns that the noise from the landing strip would disturb her rescue animals and lower the value of her property. Safar represented Ganahl in the town’s Zoning Board of Adjustment (ZBA) hearings of that appeal. In September, the ZBA denied Clark the permit. Soon after, Lincoln’s ZBA was dissolved and replaced by a development review board.

Kyle Clark has appealed the ZBA’s denial to the Vermont Environmental Court. The newly formed DRB began conducting hearings on the Clarks’ conditional use application in December, though the board will pause further hearings on the application until after the court issues a decision on Clark’s appeal.

Safar sought Frazier’s resignation because of comments he made at a public meeting earlier this month. During the DRB’s Jan. 4 meeting, board members reviewed state requirements for warning public meetings. Safar said this conversation likely stemmed from her stating to town officials that the Jan. 4 meeting had not been warned publicly in compliance with state requirements.

“They wanted to discuss the fact that I had raised this issue about a meeting being properly warned. Which is really kind of shocking that this newly elected municipal board had not been trained properly,” she told the Independent.

During the board’s discussion, Frazier seemed to make a point to the board about a greater need for organization in the DRB’s proceedings. In his comment, Frazier referenced cases like that of the Clarks’ application that draw in legal counsel.

“Now that there’s more legal services being involved in these cases, these hearings, it’s got to get straightened out,” he said. “People coming into this town that have the money to hire these very expensive lawyers will look at these boards like a bunch of country bumpkins, that don’t, ‘they don’t know how to put two pieces of paper together with a stapler.’ Because that’s what they think of us, and it shouldn’t be that way.”

The board then went on to discuss the process of properly posting an agenda for meetings, during which Frazier explained that the agenda for the Jan. 4 meeting had not been posted according to state statute.

Frazier said he wanted to avoid a similar situation in the future, referencing how Safar had “caught (the board) off guard” by taking issue with the meeting not being warned properly. He went on to say that if he had chosen to continue with the Clarks’ application hearing (which, earlier in the meeting, Safar and opposing counsel had agreed with the board to postpone) that Safar “would have cried, she would have screamed and yelled for two hours.”

Safar said she believes Frazier’s comments were unfounded and unprofessional.

“He proceeded to insult me, portraying me as a histrionic female,” she said. “It’s very clear that Mr. Frazier has some type of extremely negative opinion of me, but to be raising that in a public meeting that’s being recorded, I don’t understand that.”

Safar also noted that she feels Frazier’s comment exhibited a bias he should not be wielding as chair of the DRB.

“It’s just absolutely outrageous. There’s no way Ms. Ganahl or any of the other interested parties can believe that they’re going to have a fair hearing when someone is having that kind of outburst,” she said.

Following the Jan. 4 meeting, Safar sent a request to the selectboard on behalf of Ganahl, asking that the board consider obtaining a written apology by Frazier to Safar and Ganahl and requesting Frazier’s resignation in light of the comments he made.

Lincoln Selectboard Chair Bill Finger confirmed in a Friday email to the Independent that Frazier had resigned as chair and a member of the DRB on Jan. 13, effective immediately. Frazier did not respond to email requests for comment.

Safar told the Independent she has other concerns regarding the Jan. 4 meeting, specifically the meeting not being warned properly and DRB board members discussing the Clarks’ application outside of a proper hearing.

“What went on at that meeting was absolutely outrageous and violated all kinds of rules about the process,” Safar told the Independent. “It’s very, very alarming that the process is proceeding this way.”

Safar is not the only person unhappy with the DRB’s level of professionalism.

Lincoln’s DRB was formed last year, after the selectboard decided to replace the town’s zoning board of adjustment with a development review board. In May, the selectboard began interviewing prospective appointees to sit on the DRB, ultimately selecting five Lincoln residents to make up the new board prior to the DRB’s first meeting in August.

A Lincoln resident told the Independent they felt that the timing of the selectboard’s schedule to change the boards conflicted with the existing ZBA’s hearing workload, such as reviewing Kyle Clark’s former application for a landing strip, and the transition was rushed.

A previous version of this story was published online on January 13 and updated for the January 19 print edition.