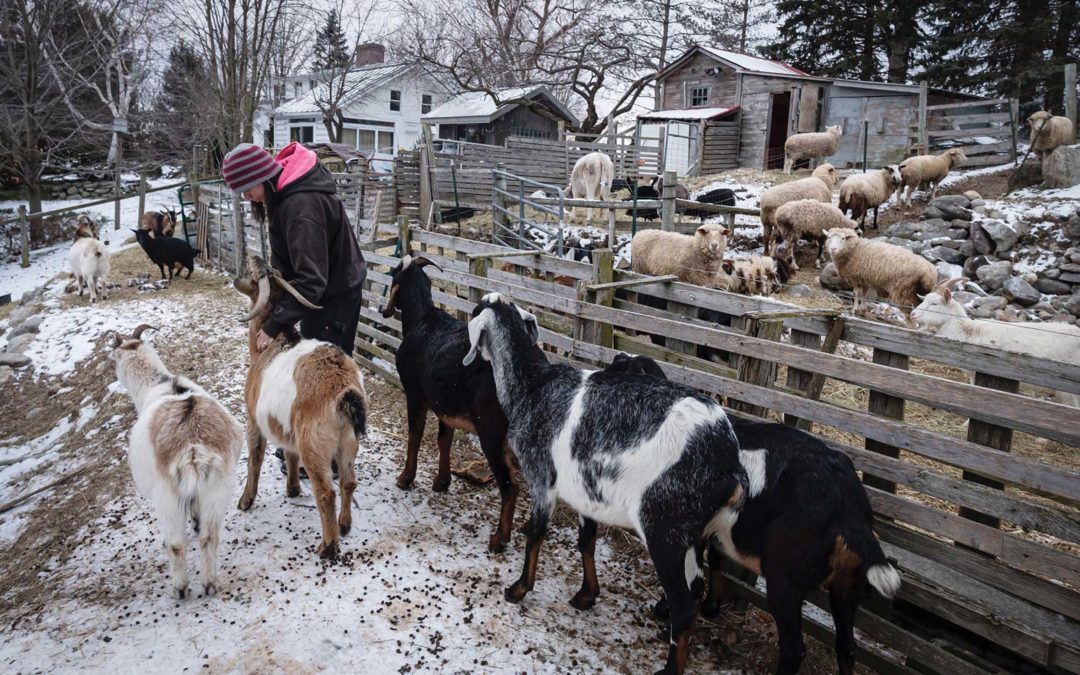 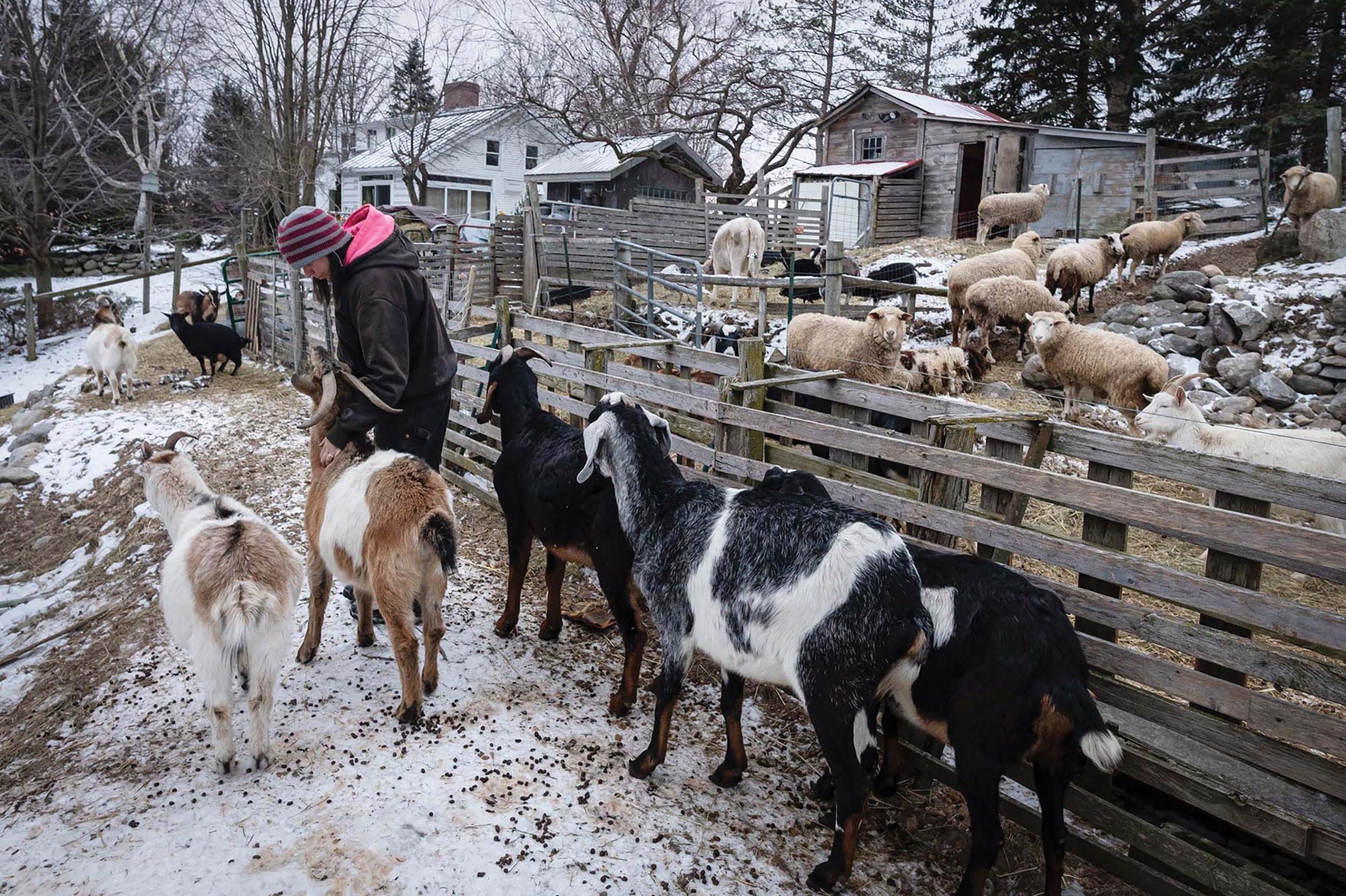 ERIKA GUTEL PETS one of the goats at Kinder Way Farm Sanctuary in Middlebury on Tuesday. The animal sanctuary was heavily damaged during the weekend’s wind storm. Photo by Glenn Russell/VTDigger
By Emma Cotton, VTDigger

MIDDLEBURY — After losing their income during the COVID-19 pandemic, selling their former farm sanctuary in Benson and starting over in Middlebury this year, Erika and Mark Butel felt like they finally had their feet on the ground.

Then, on Thursday, Dec. 22, their world turned upside down when hurricane-force winds tore through the state.

In Burlington, gusts nearly set the record for highest wind ever clocked at the airport. Around 40 miles south, in Middlebury, it blew apart the structures that shelter the 100 rescued farm animals at Kinder Way Farm Sanctuary and a yurt that the family rents out, contributing significantly to their income.

“The wind had literally picked these things up and made them into toothpicks, like, 100 yards from where they belong,” Mark Butel said. “I’ve never seen anything like it.”

While their home on the property remained intact, buildings that Butel and his kids constructed during the spring and summer were gone, and left the animals — sheep, cows, goats, pigs, geese, horses, turkeys — disoriented and looking for their homes, he said.

None of their animals were hurt in the storm. But the farm’s mission — to give abused and neglected farm animals a safe forever home — doesn’t generate income on its own, and rebuilding will come at a considerable expense.

The couple formerly owned and operated a coffee shop, first in Fair Haven, then in Castleton, which “funded everything,” Butel said. Then the pandemic hit and the coffee shop shut down. The bills piled up and their funds dwindled, so they remodeled their garage and opened a coffee shop at the Fair Haven farm.

The money helped, but they still couldn’t recover. Last March, the Butels sold the farm.

“It broke our hearts but we had to,” Butel said. “It was either that, or we walked with nothing.”

With the pandemic’s signature real estate market swings, they weren’t sure they’d find a place to go — but then, one of their followers connected them with family members in Middlebury who had 65 acres of land. Without existing farming infrastructure on the property, the Butels did most of the construction themselves.

“We did like 10 years worth of work in about six months,” Butel said. 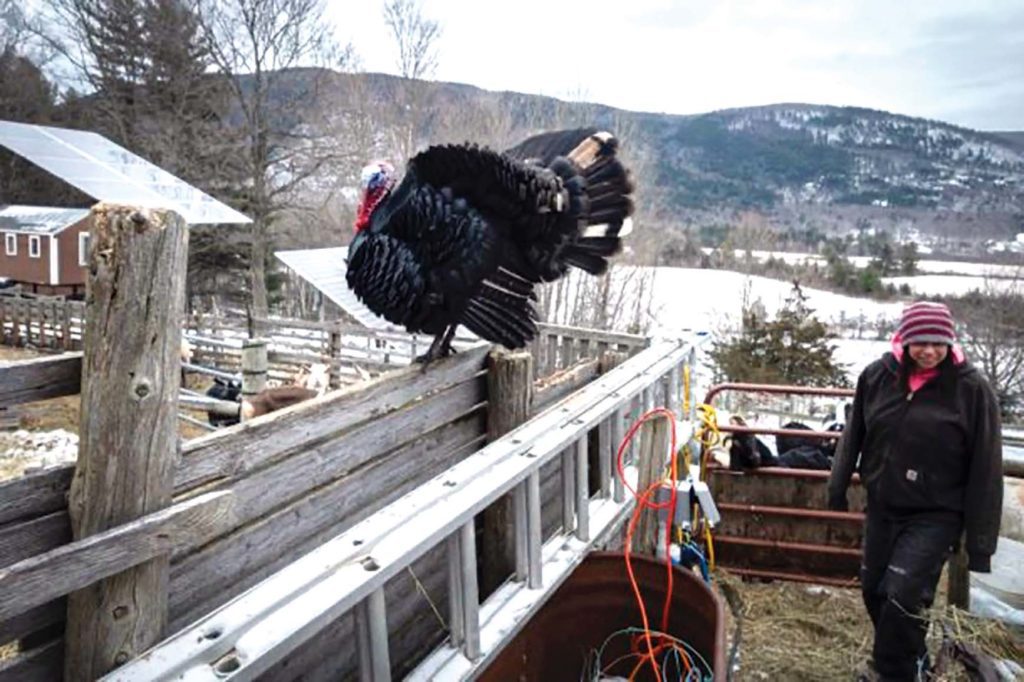 A TURKEY STANDS on a fence at Middlebury’s Kinder Way Farm Sanctuary, which was damaged during the weekend’s wind storm.
Photo by Glenn Russell/VTDigger

Butel got a day job working for the local sheriff’s department, and they built a primitive yurt with a woodstove, tables and chairs, and rented it out on the online platform HipCamp.

They were just getting their feet wet, Butel said, when the winds came.

Last Thursday night, Erika stayed awake, unable to sleep through what “sounded like an all-night tornado,” she said. They heard snapping and glass breaking. Mark woke — convinced the ordeal had been a dream — to Erika standing over the bed, expressionless.

Since then, the Butels have regained faith in their future. As the day went on, they realized every animal was accounted for. Erika set up a GoFundMe over the weekend, and as of Tuesday afternoon, supporters had donated nearly $18,000.

“We were going to flee,” Mark said. “And now, you know what, we can actually rebuild. We can actually make this work. It’s fantastic.”

“That tells me that people care,” he said. “People care, and compassion will always win.”

Across the state, Vermont agricultural producers who suffered damages from the weekend’s storm may be eligible for emergency assistance through the Emergency Conservation Program. Farmers who need help should contact their local Farm Service Agency office.