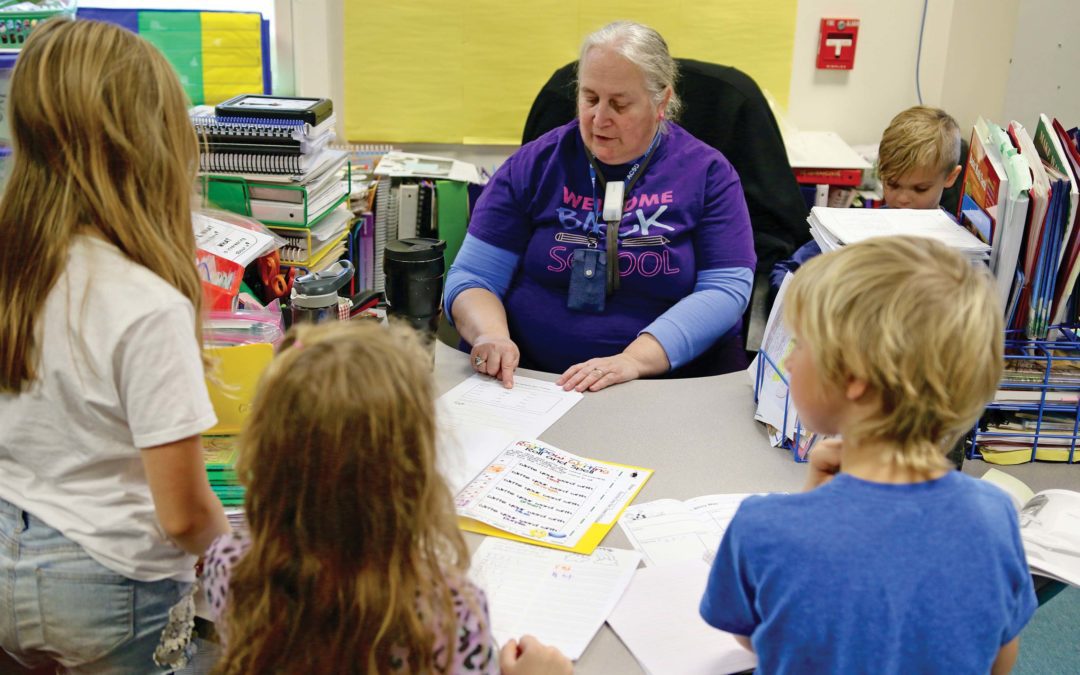 ADDISON COUNTY SCHOOLS are contending with substantial staff shortages, finding it particularly difficult to recruit paraprofessionals, substitutes and custodians. As a result, existing staff — such as Ripton Elementary School teacher Charlotte Holmquist, shown here working with her students on Monday — have had to do more. Independent photo/Steve James
By John Flowers & staff

ADDISON COUNTY — Years of college and graduate school plus decades in front of classes have prepared Principal Tracey Harrington for her job leading instruction for scores of students at Ripton Elementary School.

On Monday, though, she found herself not in the classroom but in the lunchroom. She was filling a hole in the food service staff that day by serving meals to the children.

“It’s a struggle every day,” Harrington said. “Yesterday morning I was cleaning (because of an absence of custodial staff). Others here were cleaning the bathroom and emptying garbage.”

She’s not complaining and is appreciative of how community members and the Addison Central School District have pitched in to smooth out the staffing snafus, which she said are more serious this year than in past ones.

Public schools across Addison County have been hit by the same worker shortage that has affected most other Vermont employers. All local school districts are having difficulty hiring support staff and substitute teachers.

The Addison Northwest School District was able to hire only 25% of the substitutes it needed in November. The Vergennes-area district is advertising and searching for a long-term substitute for a Special Education position and a second-grade teacher, and it has been doing so since September.

“We have had trouble hiring for custodial positions and often times paras as well,” said ANWSD Superintendent Sheila Soule. “Also sub shortages continue to plague us.”

The Mount Abraham Unified School District has a very small list of available substitutes; plus, it has three educational assistant positions posted and has seen “very few applicants,” according to MAUSD Assistant Superintendent Catrina DiNapoli.

“We’re working tremendously hard to re-assign where we need to in order to ensure support for our schools and the students we serve,” she said.

“It’s been pretty consistent over the past year and a half, and it’s been a national issue,” ACSD Superintendent Peter Burrows told the Independent. “I’ve said at a number of board meetings that some of our support staff positions have been more challenging to fill.”

A perusal of the ACSD’s human services webpage shows the district is also looking for a language acquisition long-term substitute, a school counselor, a school nutrition manager, a school psychologist, a special educator, a speech/language assistant and a speech/language pathologist. It’s a list that could be even longer.

“Some positions were open, remained unfilled and we didn’t re-post them,” Burrows said.

The district — which runs nine schools in Bridport, Cornwall, Middlebury, Ripton, Salisbury, Shoreham and Weybridge — has sweetened wages for some support positions in an effort to make them more attractive to what has been a shallow labor pool. And the ACSD is offering financial incentives to substitute teachers who agree to work multiple days per week. Subs receive $110 for working one day per week, with compensation rising to $150 daily for those who agree to a five-day work week.

Subs go through a short training period and make themselves available at their own discretion.

At ANWSD, Superintendent Soule is not looking forward to the time of year when illness causes more teachers to be out sick and substitute teachers can’t be found to fill in.

“I wouldn’t be surprised if we have some school closures due to absences when cold and flu season hits hard,” Soule said.

A sub is contracted for short stints, whereas a paraprofessional is a district employee.

As district employees, paraprofessionals are entitled to benefits that include health insurance, dental insurance, paid sick and holiday time and a contribution to their retirement fund. Starting pay in ACSD is $16-$24 per hour.

The ACSD central office and school principals have been peppering their weekly e-newsletters with recruitment flyers for substitutes, paraprofessionals and custodial help.

“Help our schools operate at their full potential during staff vacancies and illness,” reads the solicitation for subs. “This could be a great fit if you love supporting kids; have and want a flexible schedule; are energetic, curious, inclusive, and kind; are considering a career as a teacher or paraprofessional; and want to get involved and support our community.”

LIKE MANY ADDISON County teachers, Ripton Elementary’s Susan Ogilvie, pictured showing a video in her grade 4-5 class on Monday, is being asked to do a little bit more because of school staff shortages.
Independent photo/Steve James

The personnel shortage has put more pressure on existing staff to do more with less help.

“We’ve had to be fairly flexible,” Burrows said. “We’ve had to think in different ways about how we provide the same level of support to students without those positions being able to be filled.”

Harrington said regular staff at Ripton Elementary help out where they can, and the central office coordinates school meals and custodial services across the rural schools in the district.

“If we had a transportation company, those positions would be hard to fill, too,” Burrows said. “Finding (bus) drivers has been challenging.”

“This is a great job for stay-at-home parents, retirees and anybody looking for extra income,” the solicitation reads. “Family friendly — bring your kids to work with you!”

Burrows was asked to assess the pandemic’s role in the ACSD’s current hiring woes.

“We’ve seen what (the pandemic) has done to the number of employees… in our workforce,” Burrows said. “We’re watching to see when we might recover back to where we were. People talk about housing and increasing costs making it more challenging for people to move here. We’re hopeful and watching, trying to determine if the landscape is slowly moving back to a stronger labor force. I’m not sure.”

Fortunately, not all the staffing news has been bad in the ACSD.

“Most of our teaching positions are filled,” Burrows said. “We’re fully staffed at the elementary level. Given where we thought we might be, we’ve started the year feeling like we had made some strides filling positions and felt fairly strong in starting.”

In Ripton, Harrington is thankful for the help that community members are providing to the school, and the work of the staff that they do have. But, she said, day to day administrators find themselves having to fill staffing holes.

“The students have had a more stable start to the year — less disruptions — than in past years (during the pandemic), but behind the scenes it’s a daily scramble,” she said.

“It works, but it definitely takes away from the consistency students need.”