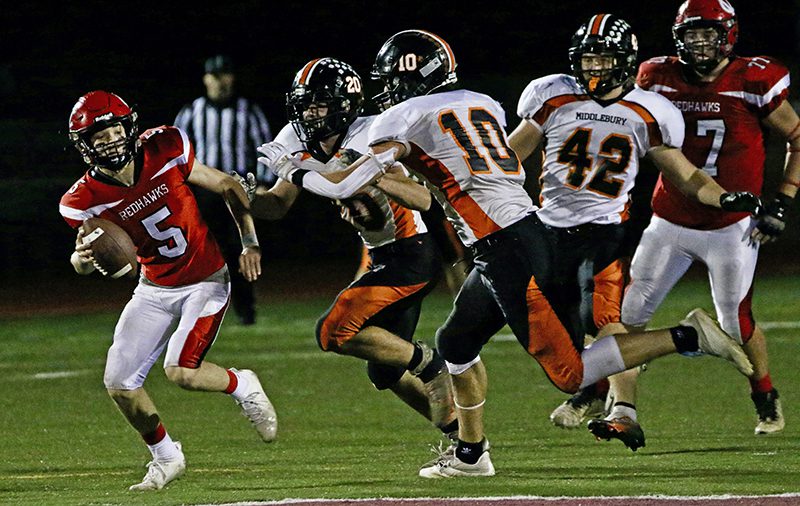 RUTLAND — The No. 3 Middlebury Union High School football team did everything except win the Division I football championship game in Rutland on Saturday. 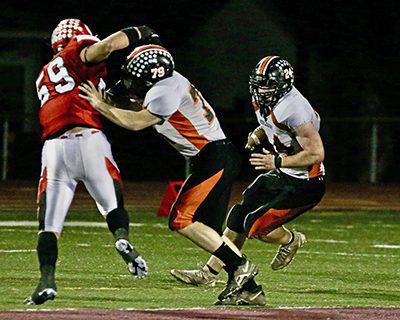 A BIG BLOCK from senior lineman Sawyer Cadoret helps spring senior fullback Cam Stone for some of his 90 yards rushing during the D-I championship football game on Saturday in Rutland.
Independent photo/Steve James

Unfortunately, the Tigers’ rally from 11 points down with eight minutes to go against No. 1 Champlain Valley came up short when two goal-to-go passes fell incomplete in the final 10 seconds. The final score was 24-19.

For sure, any resemblance of this game to the Tigers’ season-opening, 56-19 home loss to the Redhawks was coincidental.

CVU was 10-1 this season — undefeated in and largely unchallenged in Vermont this season (the loss came to a New Hampshire team). On Saturday, MUHS gave the Redhawks all they could handle.

The Tigers made mistakes — missing an extra point, taking a penalty that kept a CVU drive alive, and turning the ball over twice. But their hard-hitting defense also forced the Redhawks into several penalties for holding and illegal blocks as they tried to fend off the aggressive Tigers.

“You couldn’t ask for anything more,” Smith said. “The kids played their hearts out.”

That appreciation for his athletes extended to the work they put in to improve from an 0-2 start and to win five straight games to reach the final after taking a pounding from defending D-I champion Essex. 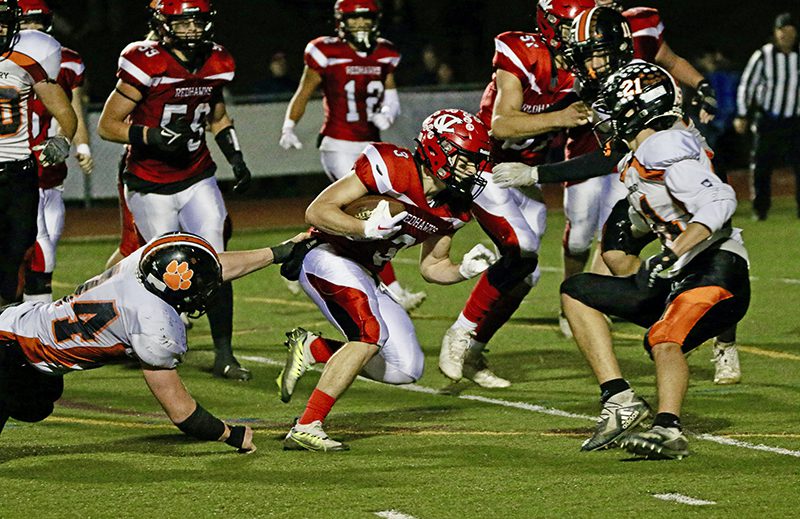 SENIOR CAM STONE, left, gets ahold of CVU’s Jack Sumner while teammates Cole Schnoor (No. 11) and George Devlin move in to bring him down during Saturday’s D-I football final in Rutland.
Independent photo/Steve James

But soon after that loss the Tigers pulled out an overtime win at Hartford that Smith said gave them belief in themselves and their system.

“You’re 2-3 and scrambling and just looking to make the playoffs at that point,” Smith said. “I think we just gained so much confidence winning that game in Hartford, that tight one, and the momentum just carried on.”

That momentum almost earned the program its first trophy since 2014. 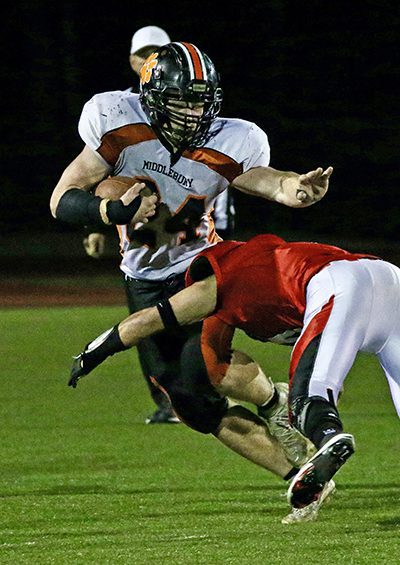 The start wasn’t promising in Saturday’s final. CVU took the opening kickoff and marched 64 yards to take a 7-0 lead on a 9-yard swing pass from quarterback Ollie Cheer to speedy wideout Jack Sumner. Cheer was six-for-six on the drive and completed 23 of 36 passes for 287 yards in the game.

The Tigers then went three-and-out. But they held on the next CVU possession thanks to one of three pass breakups by safety Jackson Gillett.

And they began to move the ball, with fullback Cam Stone (13 carries for 90 yards) establishing the run. On third-and-10 at the CVU 46 QB Jacob Kemp hit tight end Penn Riney on a deep crossing route for 27 yards. Three plays later senior halfback Cole Schnoor (12 carries, 71 yards) burst into the end zone, and the Gillett kick made it 7-7 at 11:28 of the second quarter.

A big sack by Riney and junior linebacker Gavin McNulty blew up the next CVU possession, and the Tigers took over on their own 47. Three runs by Stone and one by McNulty pushed the ball to the CVU 21, and from there Schnoor took it in for the TD. Gillett’s kick hit an upright, and it was 13-7 with 4:48 to go in the half.

CVU drove 44 yards to take a 14-13 lead with 1:21 left in the half, scoring on a 15-yard Cheer pass to Brian Rutherford. The Tigers then fumbled at their own 27, and CVU capitalized with an Aidan Morris 46-yard field goal as time expired to make it 17-13.

The Tigers got the ball to open the second half, and a 30-yard Stone ramble helped move the ball to the CVU 30. But Kemp, under pressure, was picked off by Redhawk Chase Leonard, and CVU took over and moved 70 yards to take at 24-13 lead at 6:29 of the third.

The Tigers had stopped them on a third down at the CVU 44, and a bad snap moved the ball back to the 20. Then came another crucial error. The Tigers were called for roughing the kicker, a 15-yard penalty with an automatic first down. Cheer promptly completed four straight passes to move CVU to the Tiger 11, and from there Sumner swept wide left for the score.

The Tigers drove, but a false start on third and one on the CVU 35 killed the march, and the punt put the Redhawks on their 20 late in the third. They moved the ball and probably would have scored if not for three penalties the Tigers forced. Finally, the Redhawks faced first-and-goal from the Tiger 24, and were stopped three plays later on fourth-and-goal from the two, when Cheer couldn’t hit Alex Provost with Gillett in coverage. 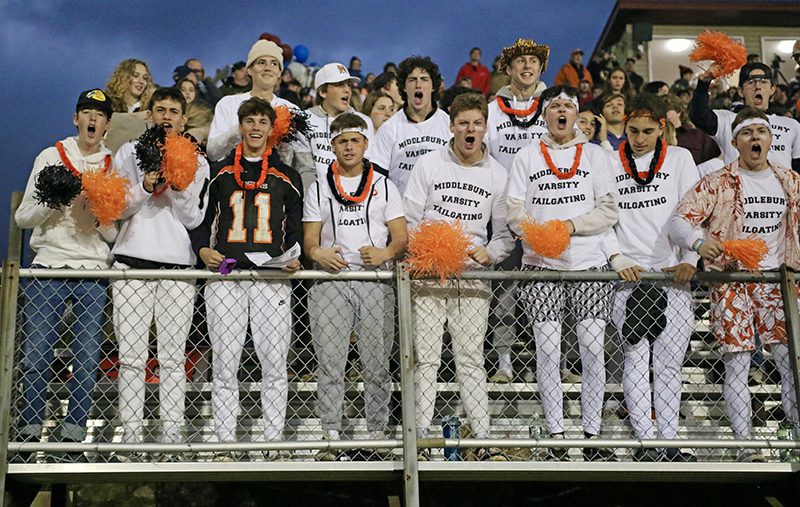 Then the Tigers marched 98 yards to make it 24-19 with 3:01 left in the game. Stone, Schnoor and Kemp ran well, and Kemp, who completed 7 of 13 passes for 85 yards, capped the drive with four straight completions, three to Gillett and one to tight end Angus Blackwell for 24 yards. The final connection in the sequence was an 11-yard toss to Gillett for the score. But the two-point conversion failed.

The onside kick also failed. But after two CVU penalties and a sack on third and 16, the Tigers got the ball back on their 37. Their first play was a handoff to Gillett that turned into a 26-yard pass back to Kemp. A personal foul on CVU moved the ball to the CVU 25. Two completions by Kemp to Gillette put the ball on the CVU 8 with 11.5 seconds to go.

And then the balloon popped. The Redhawks broke up a toss to Blackwell, and a slant pass to Gillette as time expired was a step behind him.

Suddenly it was over. CVU had survived and won the program’s first-ever title, and the Tigers were left to wonder what might have been if a couple plays had gone differently.

What could be said for sure is the Tigers did the work to turn their season around and almost derailed the No. 1 seed.

“We started believing in the things we were doing, and we just became more of a physical team once we were able to do the things we were doing and knew our assignments,” Smith said. “By the end of the year I could just do anything with them, and they could get this stuff, whereas at the beginning of the year we had to spoon-feed stuff. But this is a great fricking team, and give me a couple more weeks and I don’t know where we would be.”

“From where we were week one to where we are now, we’re a team that has come a long way,” Smith said. “I’m as proud as hell of them.” 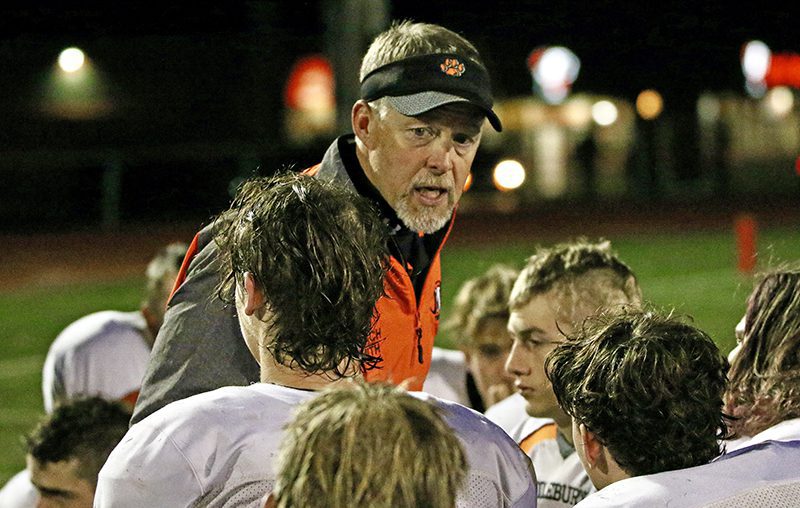 COACH DENNIS SMITH delivered an emotional message to his team after they gave it all, but came up just short in Saturday’s D-I football final against top-seeded CVU in Rutland on Saturday.
Independent photo/Steve James