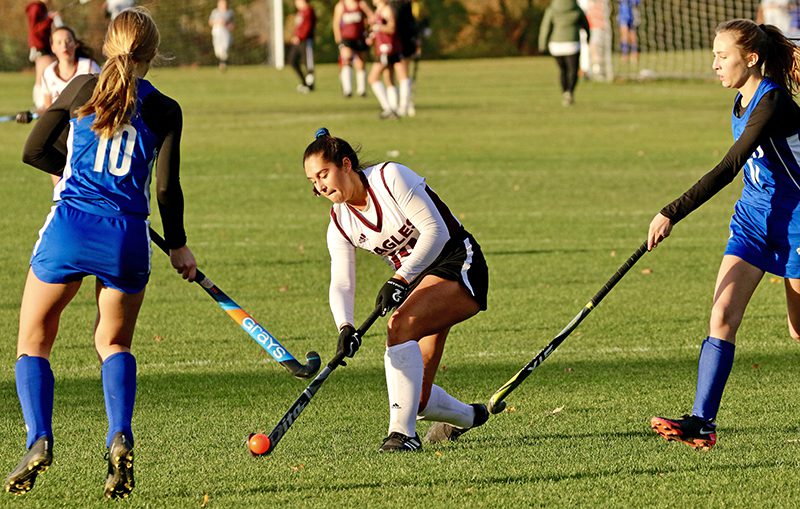 BRISTOL — The Mount Abraham field hockey on Thursday again played well versus a top Division I team, and again came up just short, this time against visiting Colchester, 2-1.

After that setback, the four-time D-II defending champion Eagles will enter this year’s tournament with an uncharacteristic, but somewhat misleading, 4-8-2 record under first-year coach Jen Myers.

Mount Abe has gone 0-6-1 in its past seven games, but each of those setbacks have come against one of the top six seeds in the D-I tournament by either one or two goals. And all except Colchester, which improved to 6-6-2 by topping the Eagles, had winning records as of Friday. 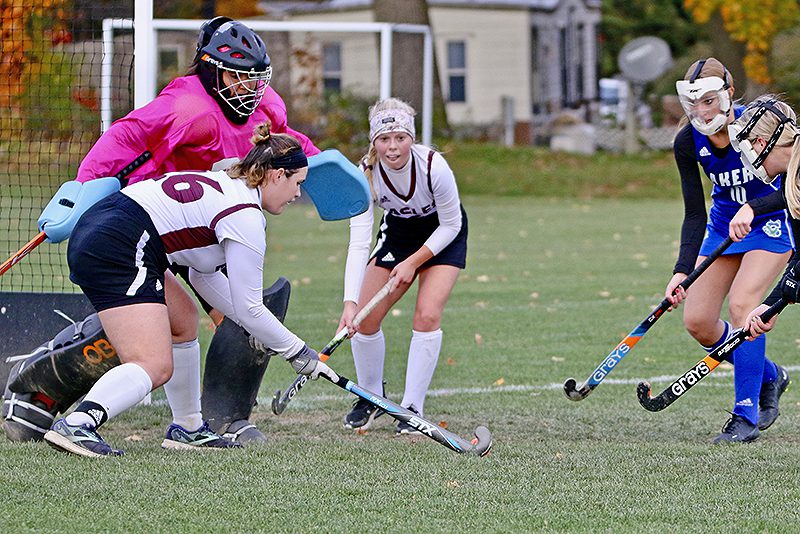 SENIOR FORWARD OLIVIA Campbell lines up the shot that would find the back of the cage and give the Eagle field hockey team a short-lived lead vs. visiting Colchester on Thursday.
Independent photo/Steve James

The D-II tournament is also loaded with good teams: The top four seeds — Woodstock, Hartford, U-32 and Harwood — each have only one or two losses. But Myers believes the Eagles, who will earn the No. 7 seed and probably host Brattleboro in a play-in game on Tuesday or Wednesday, have the quality to hold their own.

“We have been super, super competitive for the last two weeks, so I’m excited for the next step,” Myers said.

Another positive, she said, is the Eagles are healthy after dealing with a variety of ailments.

“We’ve been battling sickness and injury from the end of September to now, so we’re finally all back together,” Myers said. “So I’m hoping that is going to turn the tide for us in the scoring circle.” 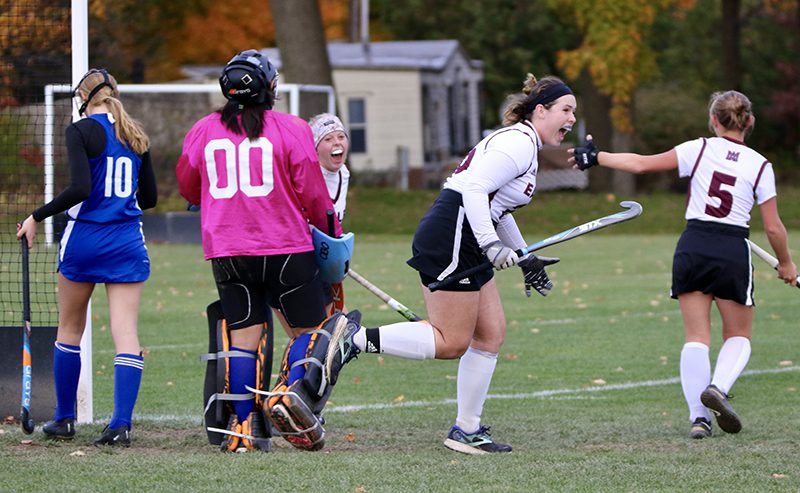 MOUNT ABE FORWARD Olivia Campbell is happy after giving the Eagles the lead in the second quarter of their Thursday field hockey home game vs. Colchester. The Lakers responded to win, 2-1.
Independent photo/Steve James

Certainly, the Eagles appear to have the defense and goaltending to hold their own moving forward. Senior backs Payton Vincent and Natalie Adams again performed well on Thursday, and junior goalie Greta Jennison’s 10 saves included some strong work.

The Lakers came out hard in the first quarter, when Jennison made five of her stops, two almost immediately on Laker midfielder Fiona McHugh and forward Grace Robinson. Mid-period, Jennison kicked away a McHugh blast from near the top of the circle, and later Adams and Jennison teamed up to thwart a Laker penalty corner. 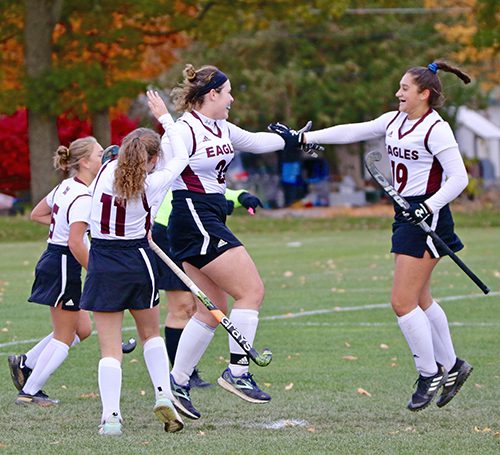 Play evened in the second quarter, and the Laker defense twice helped out goalie Trinity Conley. Mazie Audette broke up one Eagle rush, and a defender cleared away a deflected Eagle shot off the goal line on the Eagles’ first penalty corner. A strong rush by Eagle forward Lily Case forced that corner, which came in the quarter’s third minute.

But Conley couldn’t stop the Eagles on their second corner, which came midway through the period. Two senior veterans teamed up for the goal. Olivia Campbell inserted from the left to center mid Madi Gile at the top of the circle, and Gile drove the ball toward the cage. Campbell, who had cut in, tucked an angled shot in between Conley’s pads at 7:17.

Play went back and forth the rest of the period, with the best chance going to Laker Nicole Norton on a late corner, but Jennison was well positioned to stop it.

The Lakers asserted themselves in the third period. Adams broke up one early corner, and Jennison stopped Laker standout Ryleigh Garrow shortly afterward. In the third minute the Lakers got another corner, but Gile and middie Morgan Barnard broke it up.

Garrow, a track star and probably the fastest player on the field, equalized at 8:21. Jennison ranged far out to stuff Garrow’s breakaway bid, but Garrow circled back to her left to pick up the ball, raced counterclockwise through the circle, and rapped a shot inside the right post. 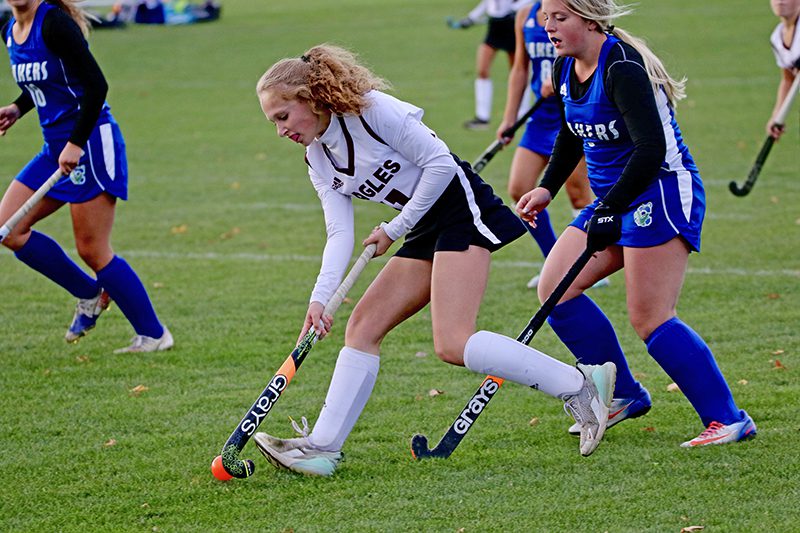 The Eagles then created chances. Conley stopped a low 10-yard Campbell shot set up by Case three minutes later. And three minutes after that Gile forced a corner and fed Campbell on the left side, but Conley, who finished with six saves, was there.

The field tilted back Colchester’s way in the fourth, and Vincent broke up an early threat. Six minutes in Gile defended a corner well, and a minute later Jennison stopped Ava Lipson.

When the Lakers earned back-to-back corners with five minutes to go, they converted. On the second, Abigail Richards’s shot from the top of the circle bounced its way through traffic and into the left side for the game-winner.

Myers would have liked to see the Eagles’ effort rewarded with a win, but remains confident in the team and its approach.

“We’re sticking to our game plan, which is working together as a group, and just continuing to encourage each other,” she said. “I don’t think anyone in the postseason will be better than anyone we faced this season.”

What else will it take to make a run, Myers was asked.

“Believing in themselves,” she said. “You’ve got to believe in yourself, and that’s going to take you a long way.”