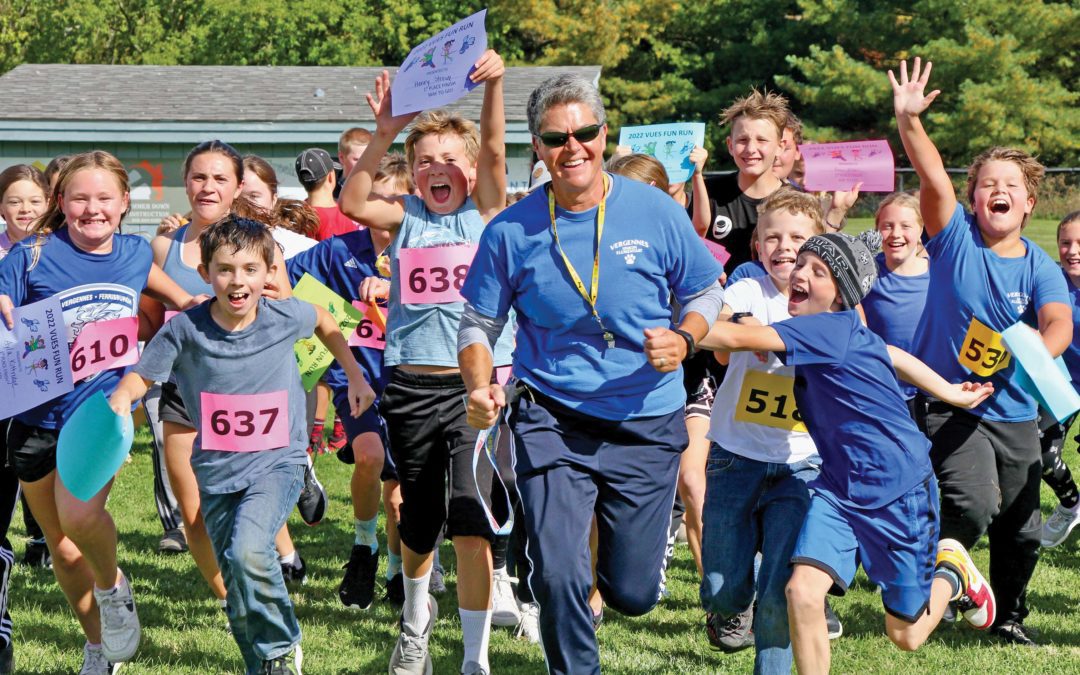 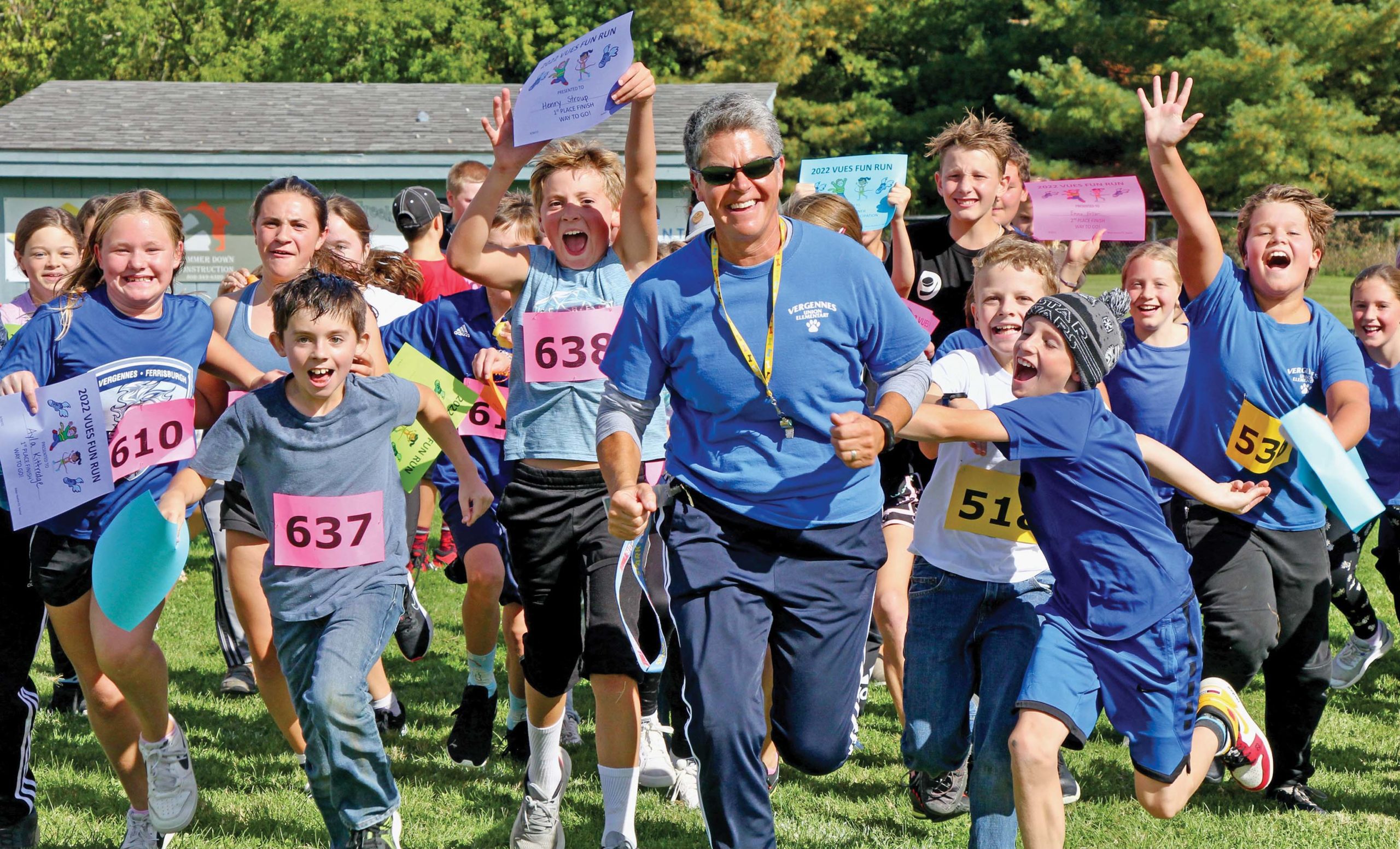 ROBYN NEWTON, THE VUES, P.E. teacher, is in her happy place, outdoors in the sun with students enjoying physical activity, here on Sept. 30 at the school’s annual fundraising Fun Run she founded. The Agency of Education just named Newton Vermont’s Teacher of the Year. Independent photo/Steve James
By Andy Kirkaldy

This past Friday’s schoolwide annual Fun Run alone normally would not only be a highlight of the week, but of the year.

One of Newton’s many innovations at VUES, the fundraising Fun Run was blessed with sunny weather and ear-to-ear smiles. Students and families take pledges to run or walk a course that covers the campuses of VUES and nearby Vergennes Union High School.

Typically, the proceeds fund P.E. equipment for VUES. This time it raised more than $4,000 toward a covered pavilion to be built in the city recreation park near VUES. Newton, a South Burlington resident, represents her school district on the Vergennes recreation committee and has helped spearhead the pavilion effort.

But last week offered much more for 49-year-old Newton, who is entering her 28th year at VUES — she was named Vermont Teacher of the Year by the state Agency of Education.

Newton recalled being one of the four finalists, with the other three also making strong cases. And two were classroom teachers who historically have dominated the award.

She was surprised by the result.

“I just was listening to what they were presenting, and I was just thinking, ‘I don’t know how the state department is going to choose between the four of us, because we’re apples and oranges,’” she said. “Each of us did something incredible in our own right. For me to be up against these great classroom teachers, I’m like, ‘Wow, that feels good. And to win!”

Making her even happier was her belief the award honors not only her, but also physical education as a whole. Research has proven that physical activity during the day boosts brain activity and academic performance. Newton believes this award is a step toward wider acceptance of that truth.

“We not only help kids physically, but it helps you with your brain. It helps you with social and emotional (learning),” she said, adding, “it kind of validates it, which seems pretty awesome.”

Newton heard from many P.E. teachers after the announcement.

“They’re like, ‘This is incredible for our profession,’” Newton said. “A lot of other PE colleagues around the state are like, ‘Wow! Go PE! Way to represent.’” 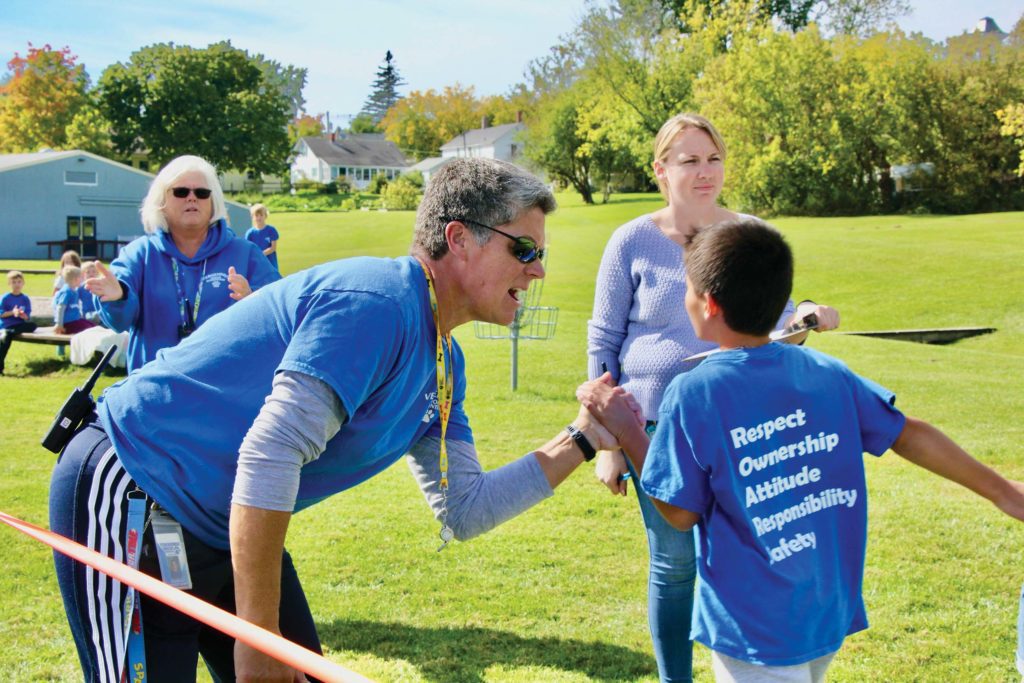 VUES P.E. TEACHER Robyn Newton congratulates a student for completing the school’s annual fundraising Fun Run on Sept. 30. The event is just one of several initiatives she has introduced at the city elementary school.
Independent photo/Steve James

Compliments for Newton started with Secretary of Education Dan French: “Ms. Newton excels in teaching, shows leadership through an interdisciplinary and collaborative mindset, and, most importantly, she builds excitement for learning in and out of the classroom.”

“Personalization of physical education allows students to understand that their own growth should not be compared to the person next to them, but rather the way that individual students have performed in the past,” he said. “Students in physical education at VUES write themselves goals, reflect on their learning in their physical education journals, and attempt to beat their self-designed goals.”

Addison Northwest School District Superintendent Sheila Soule also weighed in: “Her commitment to the health and well-being of others extends far beyond the classroom. Robyn has had a remarkable impact on the entire community through her work on the Vergennes Recreation Committee and district Wellness Team. She is an inspiration to others through her positivity and optimism.”

Newton is a Fairlee native and accomplished athlete who served as a lifeguard and gave swim lessons as a teen.

Newton went from Oxbow High School to UVM without a clear idea for her future, although she knew she liked working with kids.

“I thought maybe a science teacher, and I had a great phys ed teacher who I loved,” she recalled. “So I had a great role model, too.”

At UVM, Newton was a four-year starter at first base for the softball team. Eventually, the lure of athletics and physical activity won out over her love of science.

“My sophomore year I said, ‘Get me into the phys ed program,’” Newton said.

There, Newton was shepherded to Vergennes by former VUES P.E. teacher Lynn Johnson, then also a UVM assistant softball coach. Johnson, late in Newton’s sophomore year, recruited her as a VUES P.E. assistant and as a city pool lifeguard and swim instructor.

“For three years right after college I would come down, learn the ropes of P.E., and I would help run the swim program. I got to know the school, and they got to know me,” Newton said.

“I got here and it was, ‘You’re already hired. This is a formality,’” Newton recalled of her interview. “I knew she had a good program. I was able to start with something that was pretty powerful and take it from there.” 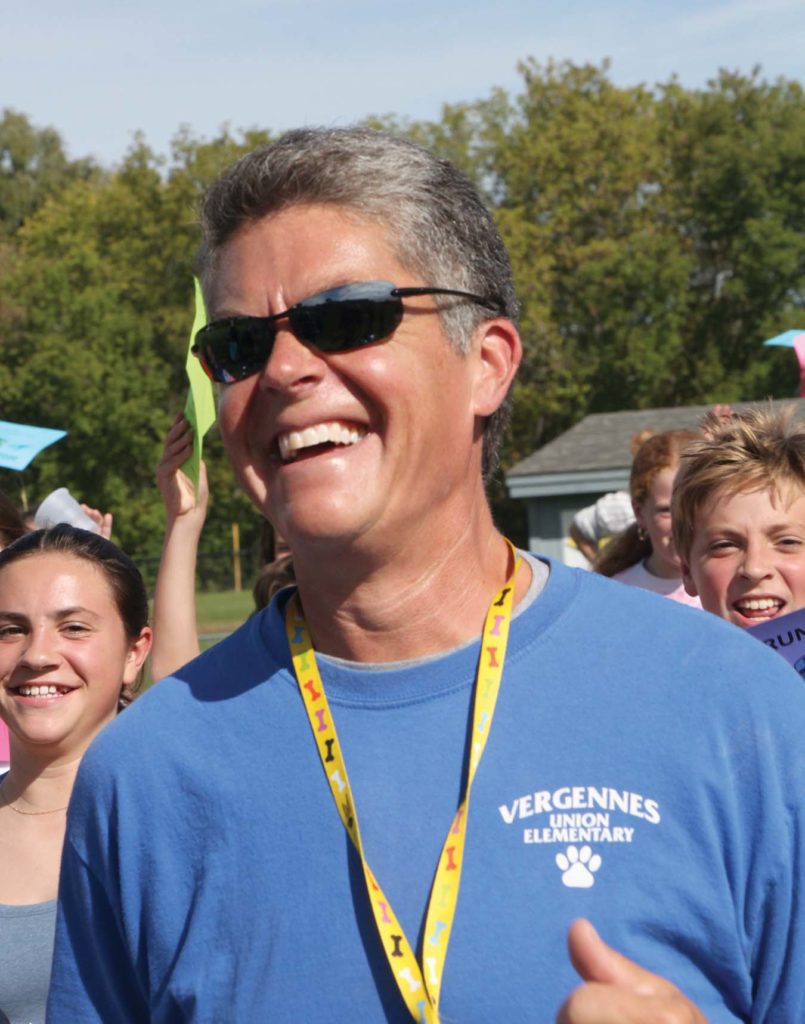 VUES P.E. TEACHER Robyn Newton had plenty to smile about on Sept. 30. The Agency of Education just named her Vermont’s Teacher of the Year, and the annual schoolwide Fun Run she founded just raised more than $4,000 for the Vergennes pavilion project.
Independent photo/Steve James

Newton can point to many accomplishments, including a 2008 Physical Education Program (PEP) grant for more than $900,000 that she and VUHS P.E. teacher Ed Cook successfully spearheaded for the district.

“When we wrote the grant, we didn’t know we were going to get it. We said, ‘Why not?’ … It was like this Christmas list. We were probably not going to get it, but let’s shoot for the moon,” Newton said.

The grant not only got that equipment for the district, Newton said, but also new respect for P.E.

“That really started our district thinking this is an important piece, wellness and movement and getting our kids active. It was also to help start bringing more afterschool programs. Because not everybody does this three-sport thing. We wanted to have other things going on.”

The grant also paid Newton and Cook to go to conventions, and at one Newton learned about the interdisciplinary Action-Based Learning program she introduced to VUES kindergarten classes.

“It involves not only fine motor skills and movement patterns, but it incorporates academics. Because the point is when you’re moving your brain is fired up and ready to receive information,” Newton said.

In the program, teachers and students come together to the gym for activities, some just physical, but others that combine action and academics. For example, pupils dance along an agility ladder with the ABCs planted between the rungs to be recited as they move, thus imprinting the information. Similar activities work with numbers.

Newton has expanded Johnson’s idea into a school-wide, two-week interdisciplinary unit that includes social studies, history and math as well as P.E.

“I knew I wanted to bring that Olympic spirit here. I knew she had started it a little bit, but I just took it and ran,” Newton said.

The school’s classrooms pick countries, not only to compete in replica Olympic events, but also about which to learn in the classroom setting. Class studies focus on the country of choice, Newton said. Students choose from most of the Olympic events, ending up with one student per event.

There is no pole-vaulting or ski-jumping, but there are kayak races as well as swimming in the city pool, cross-country skiing and running races around school property, mock bobsledding, skating on the city ice rink, and more.

Newton said before the unit students get to practice events during PE classes: “Everybody gets to try everything.”

Eventually, Newton said, there are three competitors in each event at each grade level from each classroom. All students compete and earn gold, silver or bronze ribbons for their classrooms, and there is a sportsmanship award for the most spirited class.

“Everybody will win something. Your country will get one of the three medals,” she said. “It’s more about teamwork and cheering each other on and supporting each other.”

But only one was a P.E. teacher. Newton will officially begin her year-long tenure on Jan. 1, and she again emphasized the recognition meant more than a personal honor in an era in which she notes some districts often squeeze PE classes’ time or even cut them completely.

Newton firmly believes P.E. is vital for students’ well-being, for some more than others.

“It’s all equally important,” she said. “Some students do better in the phys ed department than in the reading department. So, are we just going to give up on that kid, or let him have some success in another area?”