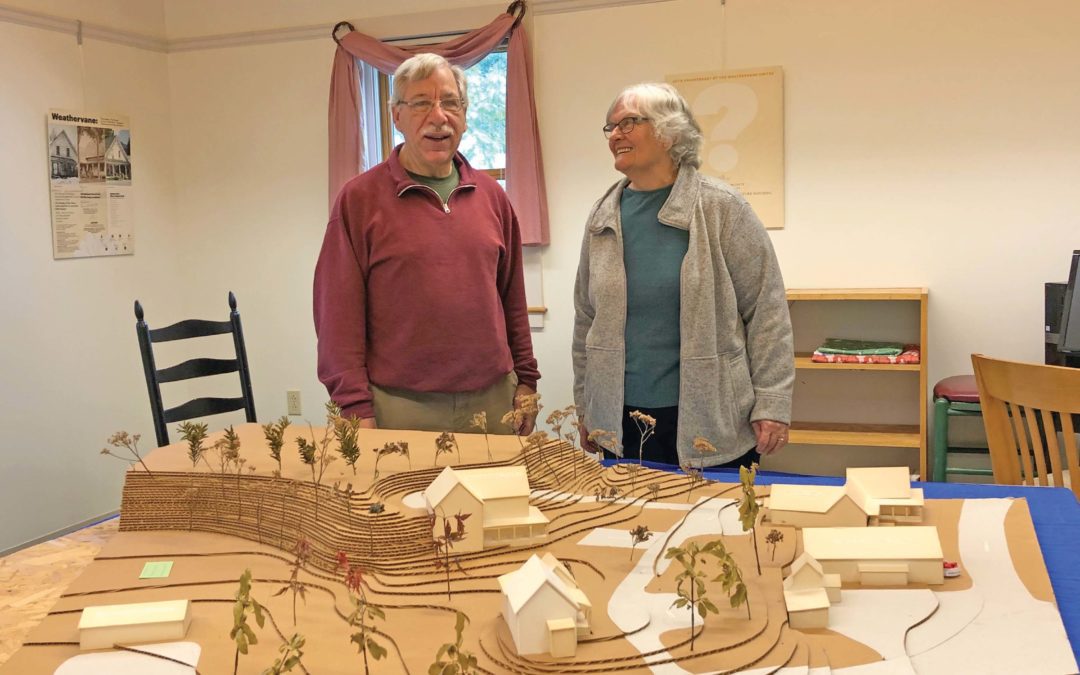 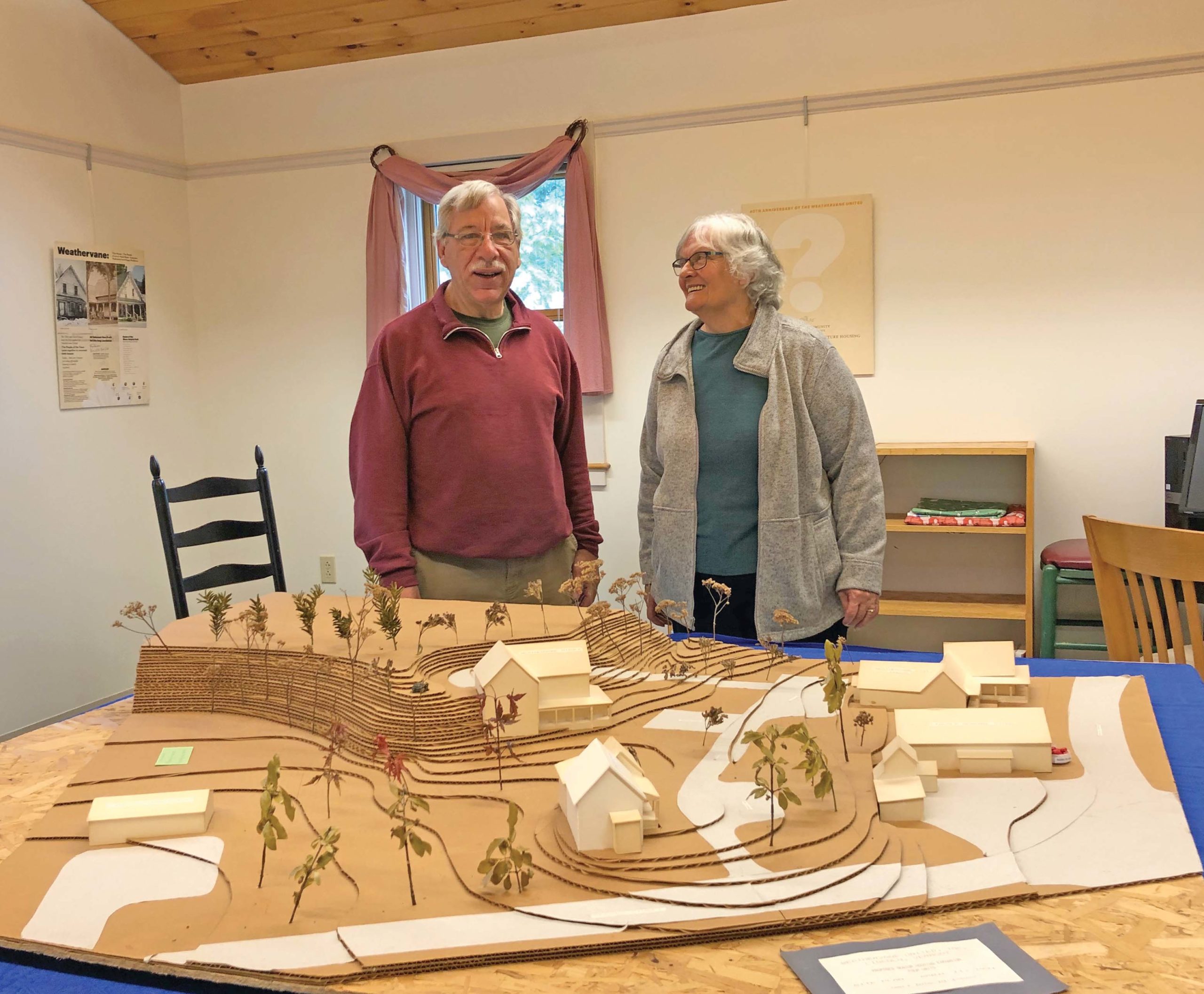 WEATHERVANE UNITED BOARD members David Wood and Rhonda Hutchins stand with a model of the Weathervane housing project. The model is part of the “Housing a Town” display at the Lincoln Library, which celebrates Weathervane’s 40th anniversary by chronicling its history and the contributions of former Lincolnites.  Independent photo/Marin Howell
By Marin Howell

LINCOLN — More than four decades ago, a group of Lincoln folks got to thinking about how they could meet the town’s needs. The fruit of their efforts was Weathervane United, the town’s volunteer-run, elderly housing project.

Now, the Lincoln Historical Society is hoping to use Weathervane’s 40th anniversary to encourage younger Lincolnites to continue the legacy of community involvement.

“Almost all of our various committees in Lincoln are run by volunteers and we’re looking to get some of our new residents involved in that,” Lincoln Historical Society President Rhonda Hutchins explained.

To celebrate the project’s anniversary, the Lincoln Historical Society has put together a display in the Lincoln Library. From now through October, visitors can stop into the library to this “Housing a Town” exhibition. A model of the housing project sits in the center of the room and the walls are filled with informational posters that detail Weathervane’s history and display the faces of current and former residents of the project.

The story of Weathervane starts in 1981, back when the United Church of Lincoln burned down. The town rallied together to restore the building, bringing it back to usable condition without acquiring any debt.

David Wood, who served as pastor of the United Church of Lincoln for 38 years beginning just before the fire, said that the group’s success got them thinking about what else they could accomplish.

“After the church our first thought was, ‘OK, we can do these things, but what should we be doing?’” he said. “Housing was one of the biggest needs for seniors in the community.” 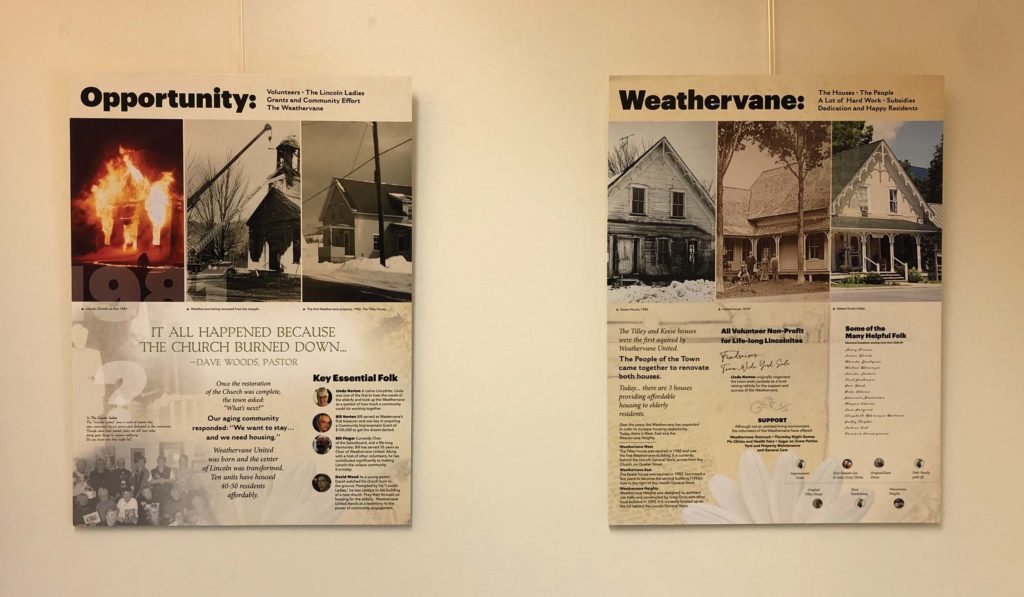 POSTERS CREATED BY the Lincoln Historical Society are part of the “Housing a Town” display exhibiting at the Lincoln Library. The display chronicles the history of Weathervane, the volunteer-run housing project that has provided affordable housing to older residents for 40 years.
Independent photo/Marin Howell

The answer for meeting those housing needs was Weathervane, a project that transformed three buildings in Lincoln’s village center into 10 apartments for the area’s older population. Over the years, these apartments have housed around 50 residents. The housing project is run by a volunteer board, which helps keep rent affordable for tenants.

Hutchins, who also serves on Weathervane’s board, said many of these residents have been invested community members.

“They’re active in town. The older people that want to stay in the community do contribute to it,” she said.

In recent years, Lincoln has joined other Vermont towns in welcoming a wave of young families into the neighborhood. Lincoln Library Director Wendy McIntosh said the “Housing a Town” display educates these families and other residents about Lincoln’s history of community involvement, an important part of continuing the trend.

“We have to really work hard on promoting the town culture of volunteering to people that move in, because they might have moved in from a place where you didn’t really volunteer,” she said.

One part of the display asks Lincoln residents to think about community-centered ways to meet housing needs, much like Weathervane has. Hutchins said she’s hoping the exhibit encourages residents to volunteer in other ways around town, such as by joining the Weathervane board.

“We’re trying to sort of advertise the volunteer committees in town,” she said. “(Weathervane) has 74 people on the waiting list for apartments. We do feel like we could probably expand but we need a younger board to do that, so it’s time to turn things over to other people.”

Wood underscored the importance of showcasing these volunteer efforts. He said that community involvement is an intrinsic part of Lincoln’s character and remembering this can have lasting impacts.

“We’re not the only special place, but (Lincoln) is a special place because of the things people have done here. As folks get to know that and say, ‘We can do this, we can be a part of this,’ it becomes a nice place to live because people are all involved,” he said.