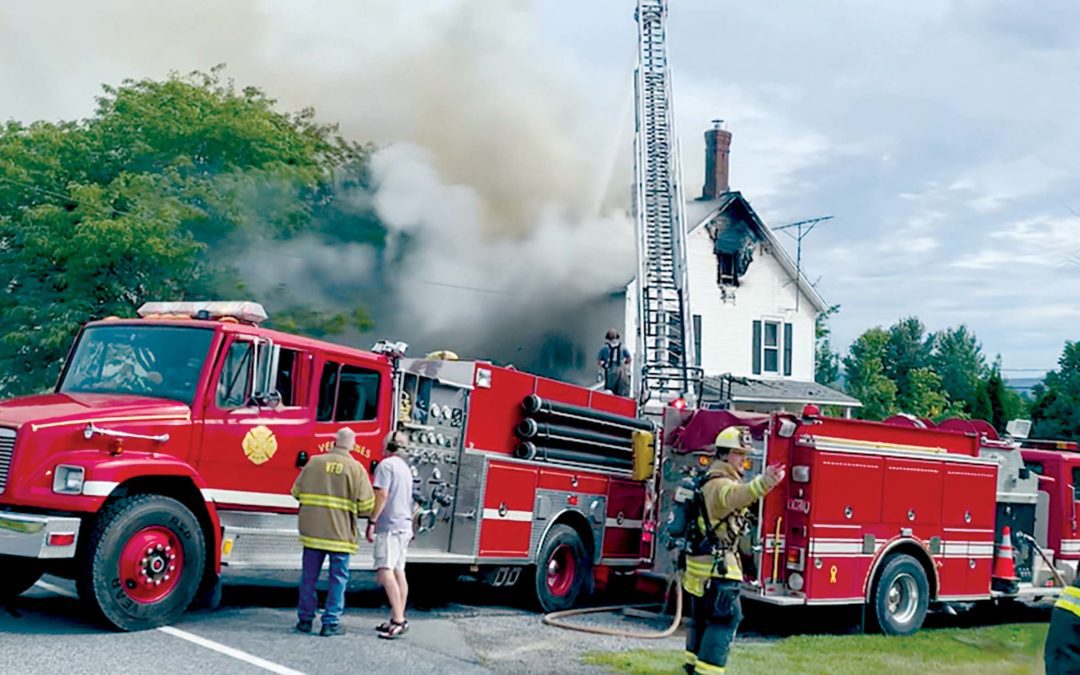 ADDISON COUNTY — As the number of hours that people have to volunteer dwindle in small towns across the county, fire departments continue to struggle to maintain an adequate number of dedicated helpers. They have worked extra hard to recruit new members, retain existing ones and foster a familial community within the department.

Bristol Fire Chief Brett LaRose recalls a time where the entire department was Bristol natives and there was a waitlist to get on the department. Now, a third of the roster is made up of people who did not grow up in Bristol, and there is certainly no cap on members.

Demographic changes in these communities have had an immense impact on Addison County fire departments. The history of many of these small towns is agricultural. Thus, departments were filled with local members, many of them sons of farmers in the area and farmers themselves.

And places like Brandon have fewer volunteers for organizations like the fire department and rescue squad because the loss of manufacturing jobs, such as at Vermont Tubbs and Nexus, has led a lot of people to move away, according to Brandon Area Rescue Squad Chief Andy Jackson. Moreover, many qualified volunteers move on to paid EMT services, he added.

And, as the agricultural sector shrinks, many people have begun to travel further distances for work, which leaves very few people for calls during the day. Bridport Volunteer Fire Department Captain Cory Pratt said the last thing a person with a long commute wants to do when they get home is go out again to volunteer. The COVID-19 pandemic has helped a little bit in this regard, with more people working locally, and thus ready to go during daytime emergencies. There are also some members of the department that are retired, or work night shifts.

Still, because fire departments are largely volunteer organizations, chiefs recognize that families and full-time employment should be members’ priorities. The goal, for LaRose at least, is for the department to be a person’s third or fourth priority.

The same is true at other fire departments around the county. Allen R. Alger, a trustee at the Orwell department, said that while there are 20 people on the Orwell Fire Department roster, a call in the middle of the day might only get three or four people.

Kyle Hutchins is president of the Dunmore Hose Company, which provides fire protection in Brandon, Leicester and Goshen. He said the Brandon Fire Department is down to 23 people on the roster, with 15 or 16 reliably coming to calls, as opposed to a 38-person roster in 2014-15, with 30 reliable members.

“With any volunteer organization, numbers are just that. They’re just numbers. What level of participation, involvement you get from your personnel is different and it’s varying between organizations,” said LaRose, who encounters a similar problem, despite having 31 on Bristol’s roster.

All the while, call volume has tripled since LaRose joined the service more than 25 years ago, going from 50 or 60 a year to 160. For instance, they respond to an average of 30 motor vehicle crashes a year in Bristol alone. Putting out fires is actually the least of what the department does today, according to LaRose. Building code improvements, public fire education in schools and other preventative aspects have helped reduce the number of fires. The department responds to false alarms, smoke detectors and residential alarms. What this means, however, is that for some of these tasks, a person might decide not to go. A lack of schedules, which is one of the benefits, allows the person to choose.

Cornwall Fire Captain Raph Worrick recalls smaller calls when only two people show up, in which he was grateful that the call ended up being not too demanding. A two-person team could not have tackled a larger problem.

“By law, we have to respond to every call that comes in. But we can’t leave the station without two licensed people in the ambulance, and one of them has to be a licensed EMT,” Brandon’s Jackson said.

Pratt owns Pratt’s Store in Bridport, and he uses it as an opportunity to recruit people who come into the fire department.

“I will honestly say that I am recruiting every day. And if it wasn’t for that, or if I wasn’t involved, I could totally see Bridport being in the same kind of situation,” he said.

Heavy recruitment has helped Bridport become somewhat of an outlier in the story of struggling numbers at area fire departments. It has about 34 members, which actually exceeds the statute of 30, leading Bridport to have to transfer some active members into life members to make room for new members.

In fact, it’s never too early for Pratt to start recruiting. The BVFD tries to involve the community and elementary school through open houses. Pratt hopes that he can ingrain in young kids how cool it is to serve with the fire department, so they remember later on when they are old enough to join.

LaRose described the six-part recruitment process for his fire department. He invites the potential member to come to an informational meeting with him, and to bring their spouse or a family member, so they understand the commitment, too. LaRose then facilitates an interview with the two assistant chiefs, town administrator and a representative from the selectboard. He does a background check and firefighters need to do a medical evaluation. LaRose can then make a recommendation to the selectboard, who ultimately approves the person. 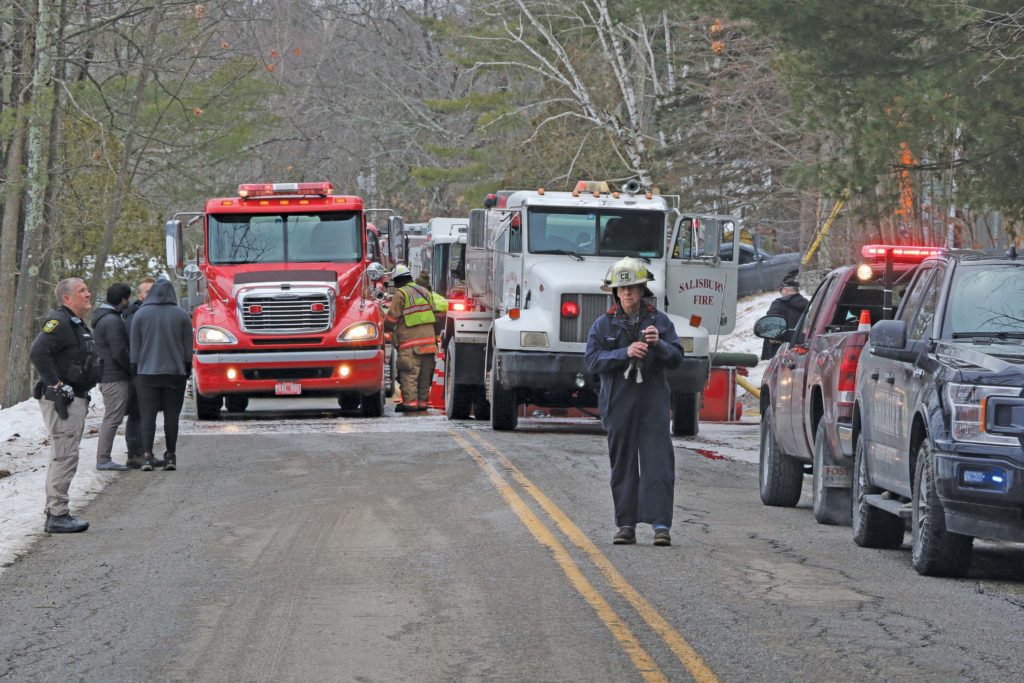 FIRST RESPONDERS’ TRUCKS line West Shore Drive in Salisbury on Feb. 21 as firefighters from nine departments, including from as far away as New Haven, Bristol and Pittsford, came to extinguish a blaze at a prominent old home known as “Tarkey’s.”
Independent photo/Steve James

The training for firefighters cannot be overlooked. For first year volunteers, the training is around 250 hours. Essentially, the department has to ask new members to give up some of their nights and weekends, all while many of them are raising a family and working full time.

Once full members of the department, the training does not stop. In Bristol, team members have to train for 36 hours per year, and 15% attendance is required at all dispatched calls for service.

Training is another area where Pratt prevails. He works hard to turn the difficult work into a fun experience.

Pratt takes training of the skills the members need and evolves it into something fun. For instance, if firefighters need to practice putting on airpacks, he might make an obstacle course with small openings and members carrying objects. The department also had ice water training, in which 20 members came in on a day below zero degrees Fahrenheit, just to experience getting into frigid water. Pratt also organizes water polo or water games to practice pulling hose lines.

“We’re a good group that likes to be together,” Pratt said.

Though he did not share fun games like Pratt, LaRose also makes a conscious effort to make Bristol’s department a welcoming space. LaRose’s work as a supervisor outside of the department helps him have a firm grasp on leadership. He uses democratic leadership at the department to ensure that everyone is involved. 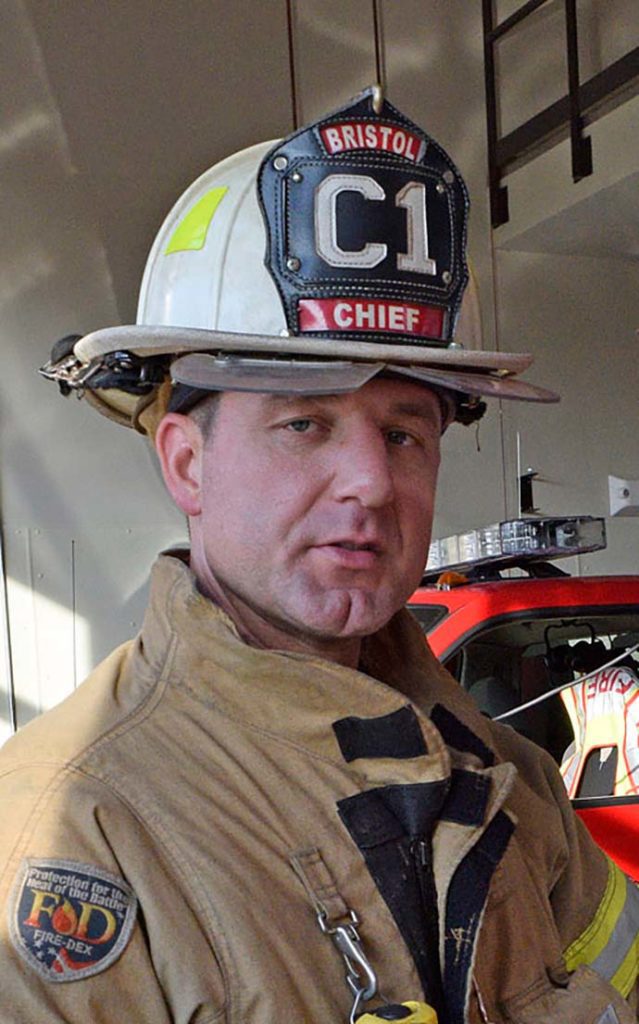 With so many small departments, mutual aid is not only common, but also necessary. In Cornwall, any call that sounds like it will be something major, like a big structure fire, is always supported by mutual aid, according to Worrick. Even if everyone from the primary department shows up, one set of firefighters sometimes just does not have the resources to handle big calls.

When the New Haven Fire Department was called to an apartment house on Route 7 in New Haven Junction last month, firefighters from six other towns also came to help battle the blaze.

LaRose has built automatic mutual aid protocols in his department’s operation. He broke the town into four geographical zones, so depending where an emergency call comes from, different people and materials respond. When a certain alarm goes on confirming a working fire, smoke in the building or something of a similar severity, it automatically triggers a second alarm for neighboring departments. The automatic aspect helps a fire response move faster.

“We try to take the guessing out of it,” he said.

The most rewarding aspect for these firefighting departments is community — the community they build with each other, as well as their ability to give back to the broader neighborhood, town and county community.

“For me, it’s also just a way to meet people in town that I wouldn’t meet otherwise, just because I wouldn’t necessarily intersect  with them through work or my own social circle, so I think it’s a good equalizer for the town in the sense that there’s all kinds of people on the department, and that gives us a good perspective on the needs of the town in a way that I’m sure a professional department doesn’t necessarily have,” said Worrick.

“It’s an extremely rewarding opportunity. We don’t get paid to do it, but the benefits far exceed anything you could get paid for. The chance to help out your neighbors in a time of need is a pretty rewarding feeling, and it makes it worth all the blood, sweat and tears,” said Pratt. “We’re a nice little family out here in the country. Everybody kinda knows each other anyways, so that makes our bond easier. Once people get the opportunity to do something for their community, many of them want to do it again.”

Despite struggles, fire departments have continued to work hard to ensure that they protect their community. Make sure to thank them next time you see them!

Editor’s note: Steven Jupiter of the Brandon Reporter contributed to this story.