Middlebury New Filmmakers Festival 8 will screen more than 140 films on six screens in Middlebury next week.
By John Flowers

“These filmmakers who have the courage to tackle these subjects, to get inside their family or their circumstances, it’s like they’re committing an act of redemption with their filmmaking; it’s not totally observational.”
— Lloyd Komesar

MIDDLEBURY — Organizers of the 8th annual Middlebury New Filmmakers Festival (MNFF8) will soon raise the curtain on what’s being billed as the most exciting crop of movies to ever populate the five-day celluloid celebration.

The festival, which will run Aug. 24 to 28, will offer more than 140 features and shorts across all genres, shown on six screens in five venues in and around downtown Middlebury.

But that’s only part of the extravaganza; MNFF8 will include other attractions for film enthusiasts, including interviews with filmmakers, a celebration of some giants in the industry, a special performance by the Vermont Symphony Orchestra (see related story), gala opening and closing events, and parties galore.

“I would argue that the range of films we got this year is the broadest — from totally fabulous cutting-edge animation … to quirky documentaries that have a lot of relevance,” said renowned filmmaker Jay Craven, artistic director for MNFF8. “I think the film selection is strong, and I think the special guests are a powerhouse.” 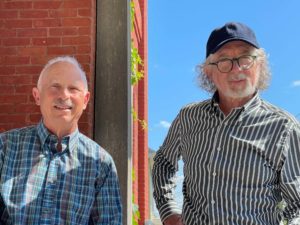 Craven and MNFF8 Executive Producer Lloyd Komesar have both worked tirelessly to evaluate more than 500 film submissions from first- and second-time filmmakers from throughout the world. Additionally, Komesar and his team have spent months laying the groundwork for a festival expected to bring scores of movie enthusiasts, filmmakers and honored guests to the festival.

The films will be screened at Town Hall Theater, the Marquis Theatre, Middlebury College’s Dana Auditorium and Twilight Hall, and outdoors under a tent at Swift House Inn.

“I think the level of dialogue we will experience — especially with the special guests — is going to be the most dynamic we’ve seen,” said Craven, who will conduct Q&As with the honorees.

For all things MNFF8 — including info on MNFF8 guests, filmmakers, the film lineup, ticket ordering and prices, venues, special events, and opening/closing festivities — log on to middfilmfest.org.

While some film festivals solicit and curate entries based on a theme, the MNFF doesn’t.

Instead, “We’re sort of listening to what the films say to us,” Craven said.

Yet several of the films are conveying a similar underlying message.

“We began to see, especially with the feature film (category), that quite a few filmmakers who were family members or part of a closely knit organization were taking up cameras and documenting the families they lived in — the emotional struggles,” Komesar said.

“There’s also a quality about ‘film as redemption’; ‘film as expiation’; ‘film as a way to heal.’ And I feel very strongly that these filmmakers who have the courage to tackle these subjects, to get inside their family or their circumstances, it’s like they’re committing an act of redemption with their filmmaking; it’s not totally observational.”

He cited specific examples of MNFF8 entries that embrace the theme of film as redemption:

• “Charm Circle,” in which filmmaker Nira Burstein attempts to bridge the fractured relationships between herself and her family.

• “Silent Beauty,” a personal documentary that follows director Jasmin López as she works to heal from child sexual abuse she endured at the hands of her grandfather almost 30 years ago.

“Good for them for having the courage to do it,” Komesar said of the family introspection theme. “You don’t know when you start making a film like this what is going to happen, when you start stirring up the bones of a family.”

Other festival offerings, according to Craven and Komesar, speak profoundly to tragedy, racism and/or inequality. They include:

• “Bad Axe,” which documents the fight of an Asian-American family in rural Michigan to keep its restaurant alive in the face of COVID-19, Neo-Nazis and generational scars from the Cambodian Killing Fields.

• “The American Dream and Other Fairy Tales,” in which Abigail Disney (yes, that Disney family) looks at America’s dysfunctional and unequal economy and asks why the “American Dream” has worked for the wealthy, yet is a nightmare for people born with less.

• “Clouds of Chernobyl,” which tells the story of a young woman under extreme pressure by her mother-in-law to have an abortion as a result of children being born dead or with malformations following the Chernobyl nuclear disaster.

• “Who We Are: A Chronicle of Racism in America,” in which lawyer Jeffery Robinson interweaves lecture, personal anecdotes, interviews and shocking revelations to draw a stark timeline of anti-Black racism in the U.S., from slavery to the modern myth of a post-racial America.

“We’ve never cast ourselves as a social-justice festival, but we give a full-throated embrace to films of this quality and this significance that we think our audiences would appreciate being exposed to,” Komesar said.

Then there are MNFF8 entries that are just plain fun and diverting. Among them, according to Komesar and Craven:

• “The High Rock,” a documentary about a unique summer camp in California’s Sierra Mountains and the landscape of childhood. No spoilers given here, but know that “The High Rock” has won “best feature documentary” at this year’s festival.

“It’s one of the most joyful films I’ve ever seen,” Craven said. “It’s based on (the premise) of, ‘You give kids as much rope as you can and see what they do with it.’”

• “Anais in Love,” which follows spirited and romantic thirtysomething Anaïs in her manic search for stability.

MNFF8 organizers also highly recommend that festival goers check out this year’s crop of narratives and short narratives. Unlike the costly and complex process of making feature-length movies, a dedicated and focused filmmaker can pick up a camera and single-handedly create a short narrative, according to Craven.

“We were blown away by a huge number of short narrative films that were terrific,” he said. “The filmmakers who don’t have the wherewithal to mount these bigger, more ambitious and costly productions are working on a smaller canvas and doing some fabulous work.”

As has been the case since 2020, MNFF organizers want to ensure that COVID-19, a perennial bad actor, doesn’t make an appearance at the festival. To that end, the MNFF8 team will require all attendees, including visiting filmmakers, to be vaccinated and show proof of their COVID vaccination when they first pick up their passes or attend their first festival event.

At that point, attendees will be given a customized MNFF8 proof-of-vaccination wristband that can be worn throughout the festival. Vaccination proof will at a minimum be evidence of two prior vaccine shots and can be displayed either on then attendee’s phone or with a printed copy of their COVID vaccination record.

All five MNFF venues have announced a mask-optional policy at this time, but MNFF is encouraging viewers to wear masks inside theaters nonetheless to promote a safer environment.

MNFF8 will close on Sunday, Aug. 28, at 6:30 p.m. at Town Hall Theater with the presentation of VTeddy Awards to selected filmmakers and honorees.

Following the awards, at 7:30 p.m., will be the screening of the festival’s closing night film, “The Real Charlie Chaplin,” directed by James Spinney and Peter Middleton.