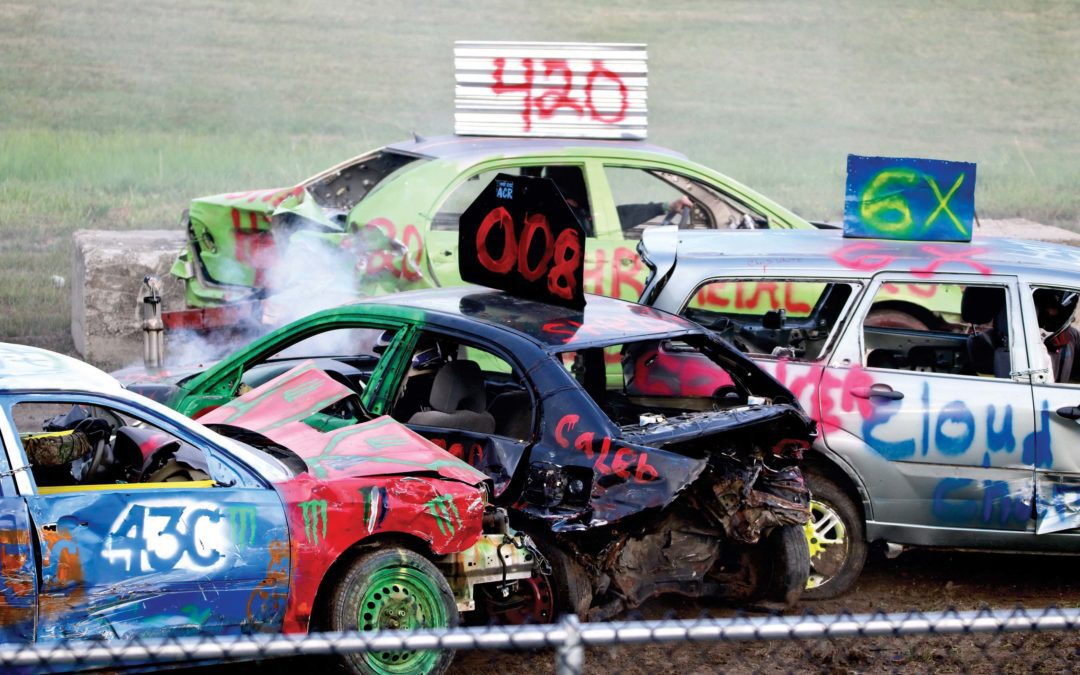 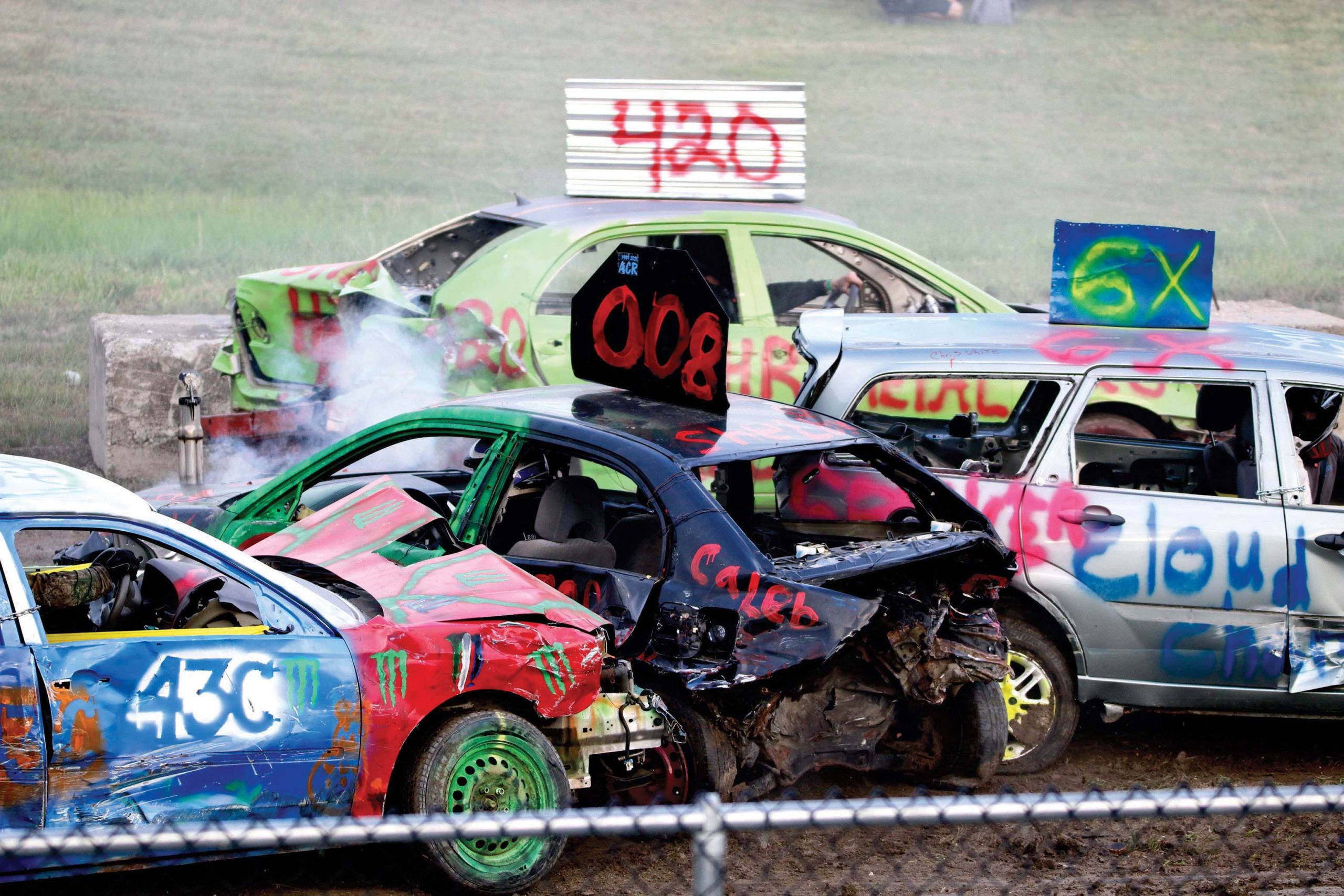 CODY CURTIS IN his car 43C can be seen crashing into other cars. The driving prowess on display Derby electrified the crowd at Field Days on Tuesday night. The crowd’s cheers were sometimes audible against each other. at the G. Stone Motors Demolition over the noise of the cars crashing Independent photos/Steve James
By Shayiq Shah

NEW HAVEN — The piloting prowess at display by drivers in the G. Stone Motors Demolition Derby at the Addison County Fair and Field Days on Tuesday night sent the crowd into electrifying cries as they cheered on the brave men and women navigating their rigs around the tractor pad.

However, simmering under the mechanical and soulless clangor from Derby cars crashing into each other, there was an incredibly authentic and humane story hidden from the countless spectators.

This is the story of Cody Curtis, a Vergennes resident who said he was diagnosed with brain cancer last year. Curtis’s participation in this Tuesday’s Derby was his first ever appearance in the competition. 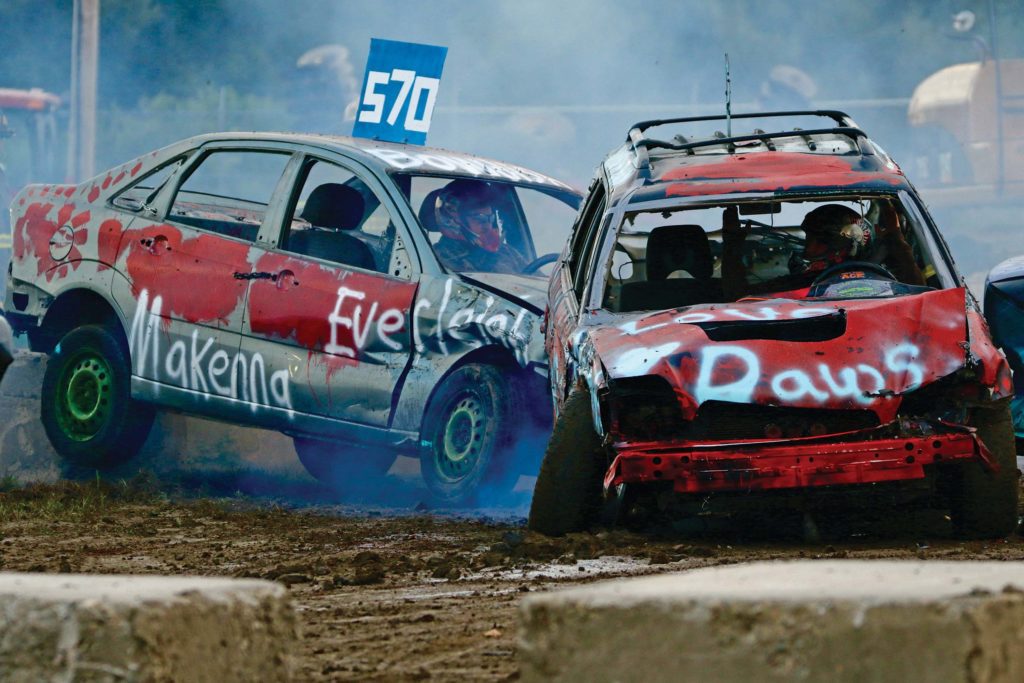 CAR 570 TAKES a bite out of the back end of a competitor in Tuesday night’s Demolition Derby. Independent photo/Steve James

The Demo Derby was held both Tuesday and Wednesday nights. On Tuesday, the Derby had cars cranking metal in four different categories: four-cylinder, six-cylinder, eight-cylinder and the mini-vans.

Cody Curtis was driving in his “Monster Car,” number 43C, on Tuesday when he partook in the first heat on the four-cylinder roster. This was his opportunity to earn himself a place in the final event of the night — the four-cylinder feature — and Curtis did exactly that.

“They were hammering me in there,” he said. “I got the first hit, and it was a BAM. But I didn’t stop going and I kept hammering them back.” 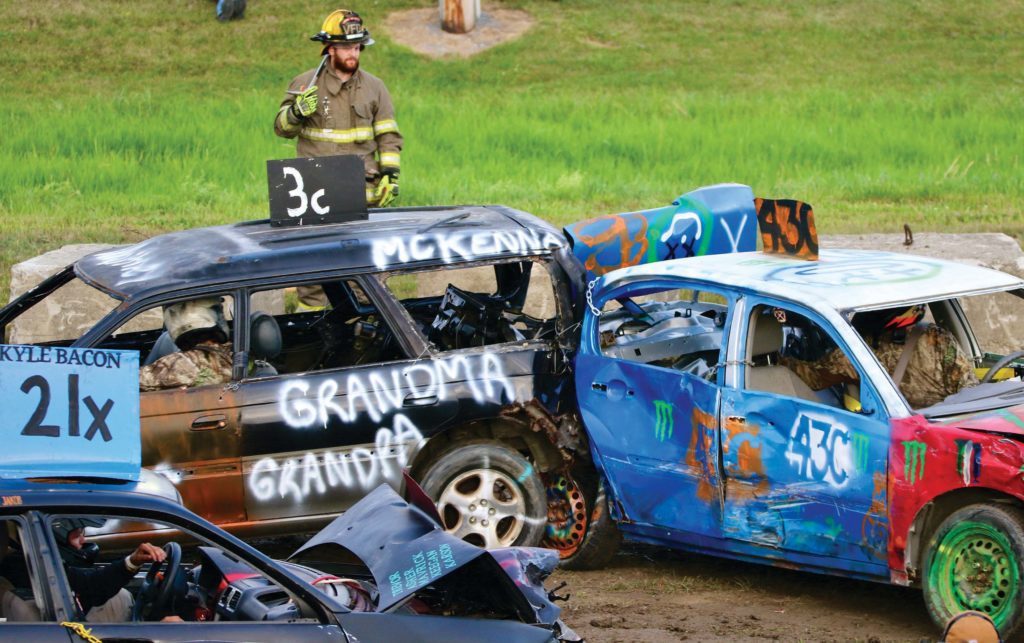 GRANDMA AND GRANDPA would be proud of the hit that car 3C put on the back end of 43C, but neither of them was knocked out yet. Independent photo/Steve James

Curtis’s resilience earned him a trophy as one of five winners of the first heat and secured qualification for the feature event. This trophy came as an early birthday present for Curtis who celebrated his 32nd birthday the next day.

However, the mettle and resolve shown by Curtis in his fight against brain cancer and inside the Derby arena could not be matched by the metal in his Car 43C. The damage taken by the car in the first heat was too severe for the car to be able to compete in the final.

Curtis, distraught, had to pull out from the final. That didn’t hamper the spirits of his family members by any stretch.

“We are so proud of him and so happy for him,” said Cody’s dad, Roger. 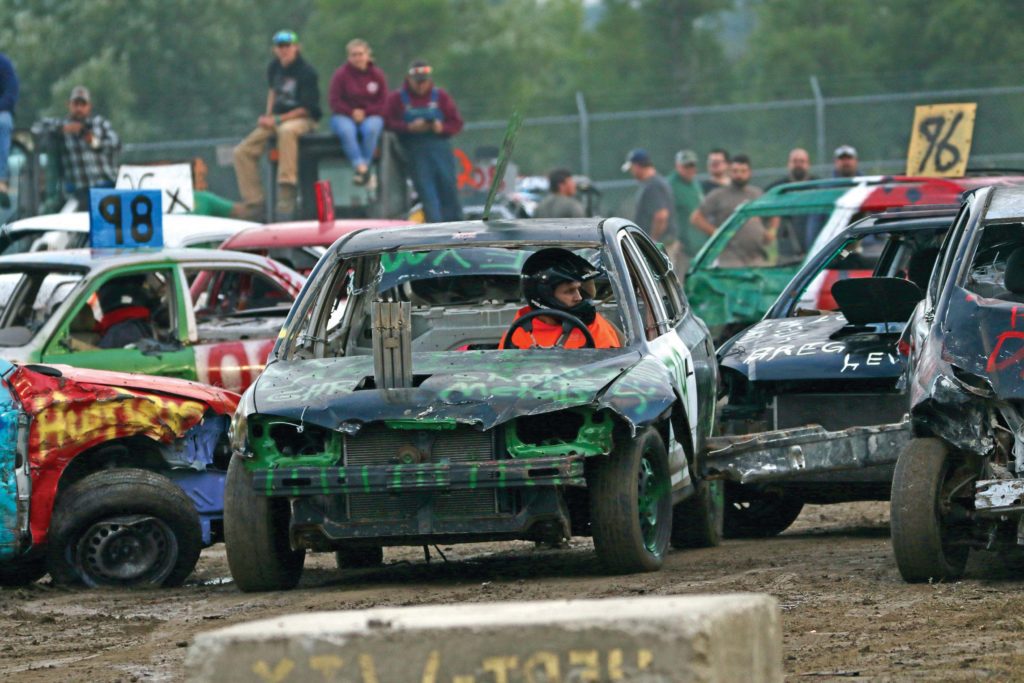 Driving into the Derby arena takes courage, however, sitting in the crowd and seeing a loved one getting crashed into by Derby cars takes even more courage.

Tricia Foster, a Field Days director since 2017, cheered on her nephew from the stands.

“As I get older, the more people I know that are driving, the more nervous I get,” Foster said.

The dangers associated with the sport were made evident in an extremely grand and scary fashion during the minivan feature event. Driver Brent Warren, driving in his car “Kid Dynomite,” hurriedly escaped from his minivan as it caught on flames during the feature event.

Firefighters from the Vergennes Fire Department rushed to the minivan engulfed by flames and put out the fire. The commentator, rather nonchalantly, said, “Ooooh, Kid Dynomite has got hot pants.” 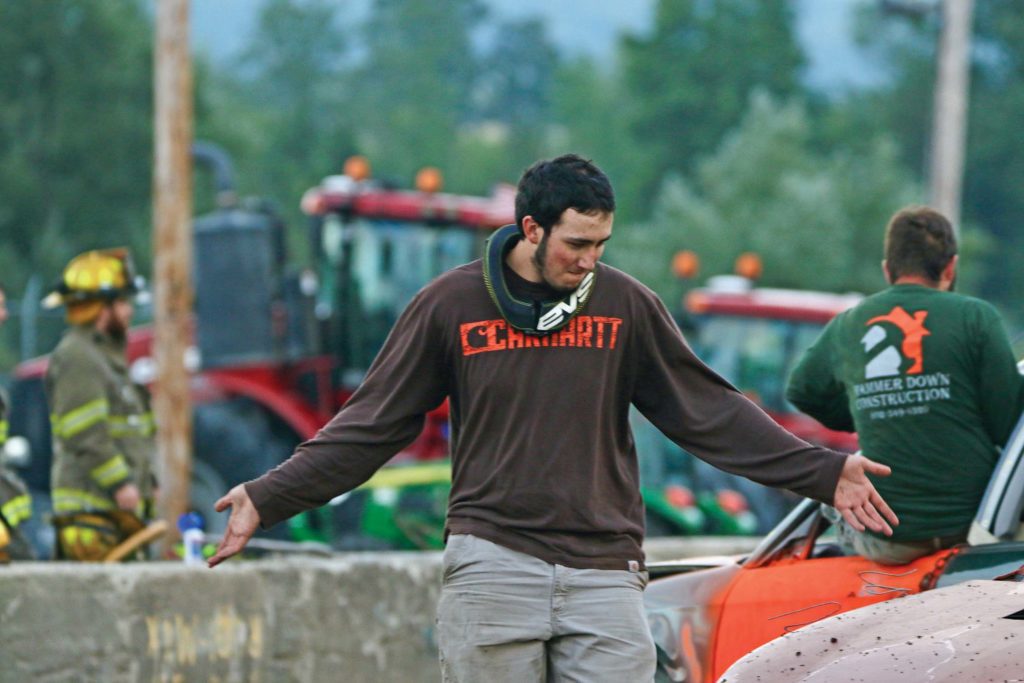 DEMO DRIVER ZACHARY Stearns wonders what in the world happened to his car on Tuesday night. Independent photo/Steve James

The calmness is his voice pointed to the fact that this would not be an uncommon occurrence in the Derby. Surely enough, that would be proven in an even more decisive moment in the same feature event when Tim Whitney in minivan 47w was engaged in a last duel with Ethan Gevry driving in “Hog Wild.”

Whitney and Gevry were the last two drivers left in their minivans. After an intense battle, Whitney in car 47w was forced to stop by the firefighters on scene as his minivan caught on fire. This gave Ethan Gevry in “Hog Wild” the win with Tim Whitney a close second. Maddie Martell driving in car 831 secured third position.

The eight-cylinder feature event went to Devin Parker driving in “Numb Skull” while the second and third positions were taken by Boomer Lafountain in car 96 and Morgan Huestis driving in car 77. 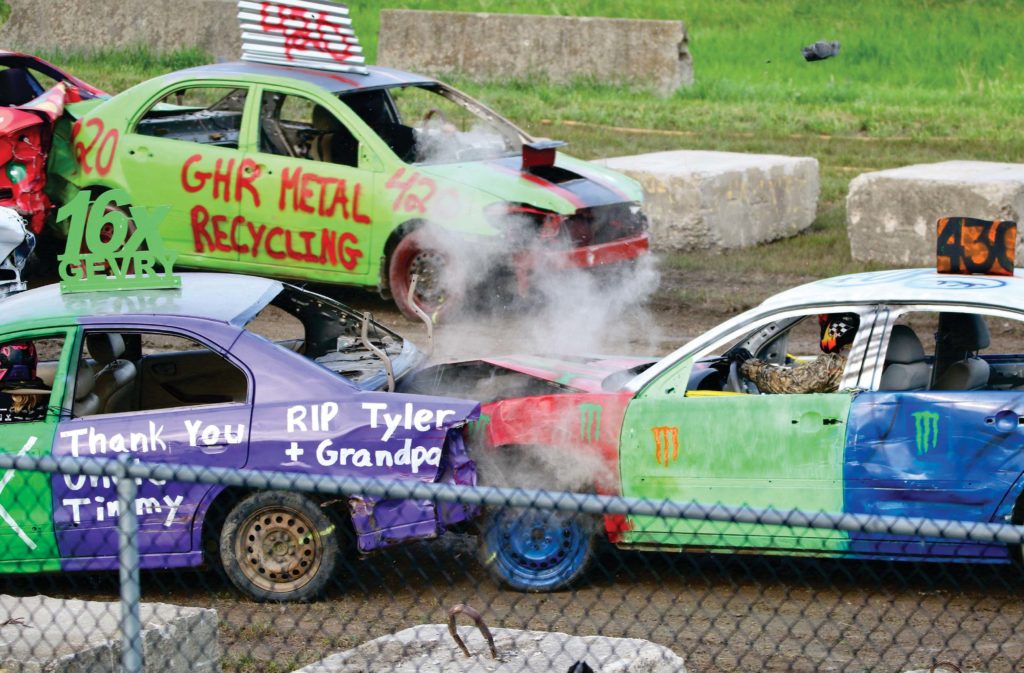 DRIVERS IN THE Demolition Derby tend to paint their cars with gaudy colors — or they go for all black. Independent photo/Steve James

The six-cylinder event gave the crowd a 32-minute thriller with an epic final battle between Jeffery Grant and Timothy Whitney Jr. Grant, driving in car 24, and Whitney Jr., driving 13T, were engaged in a heroic and bombastic last duel with both vying to get the last hit.

However, after two minutes, Whitney Jr.’s 13T received one blow too many and was finally inoperative. Grant was declared the winner after this momentous battle with Timothy Whitney Jr. a very proud second. Chuck Havens, driving in car 10, secured third position.

Finally, the four-cylinder event saw 13 cars battling it out in Tuesday evening’s final event. Two out of the qualified 15 cars had dropped out with Cody Curtis’s 43C being one of them. 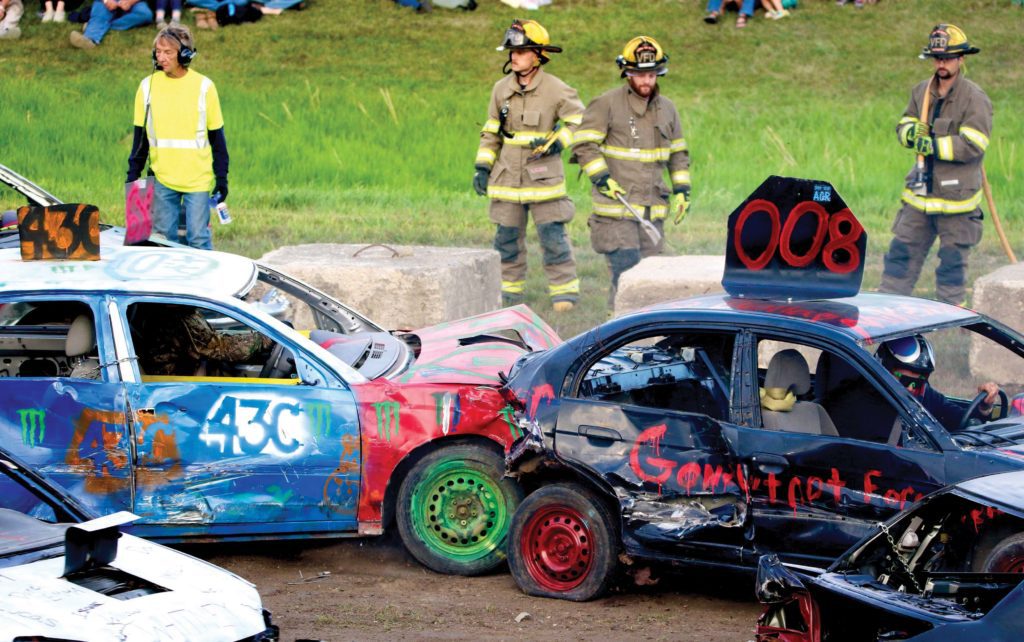 The Derby finished with three cars battling it out at the end with Greg Whitney being “timed out” for not having moved in a minute or having hit a live car with his car 22G and secured third place.

Soon after, the two-horse race saw another horse drop out as Gary Grant was also timed out in his car 22 giving Landon Lathrop the win in his car 98.

This culminated an exciting night at the Field Days tractor pad that had seen joy, tears, flames an incredibly humane story and plenty of good old-fashioned demolition.

Editor’s note: Look for a full list of winners from both nights of Demo Derby in next week’s Addison Independent. 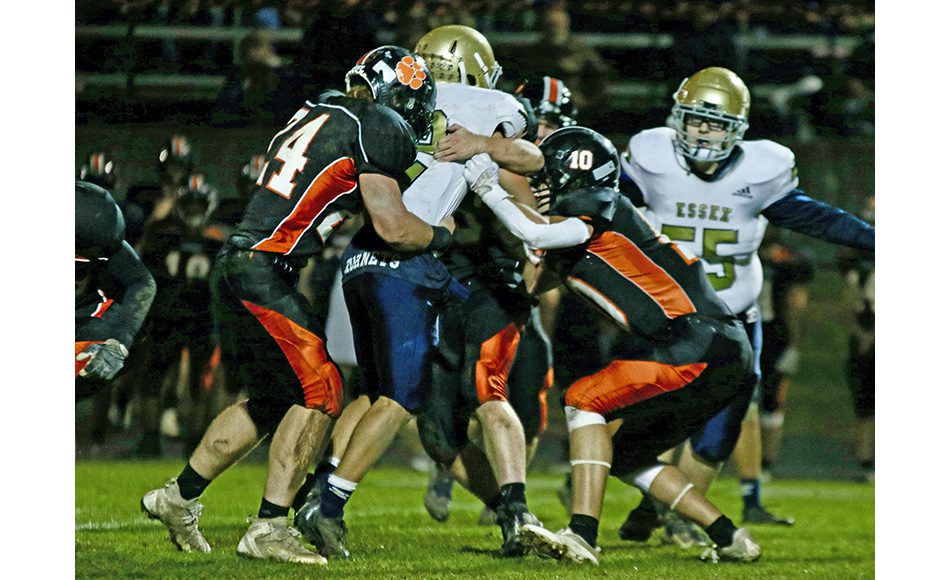 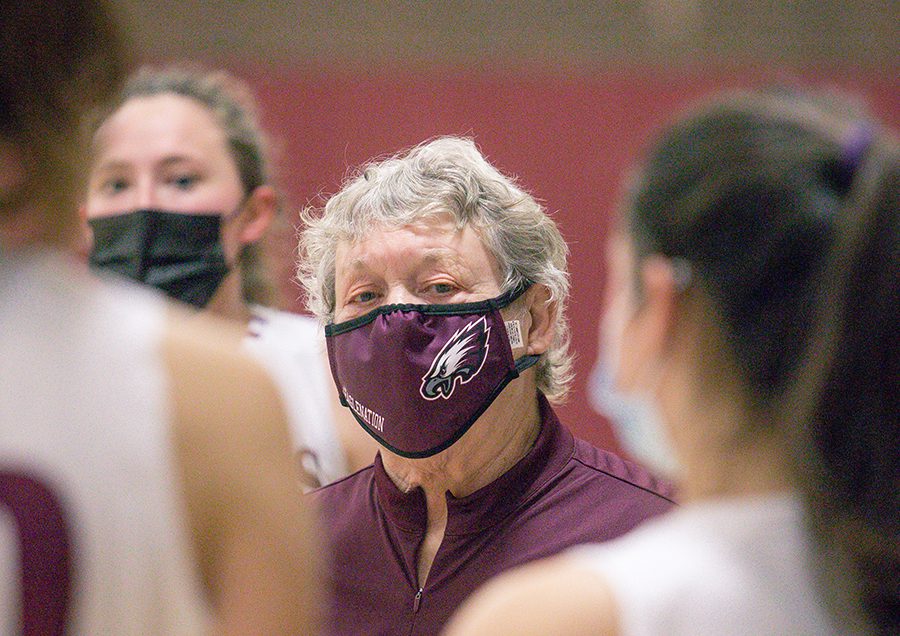 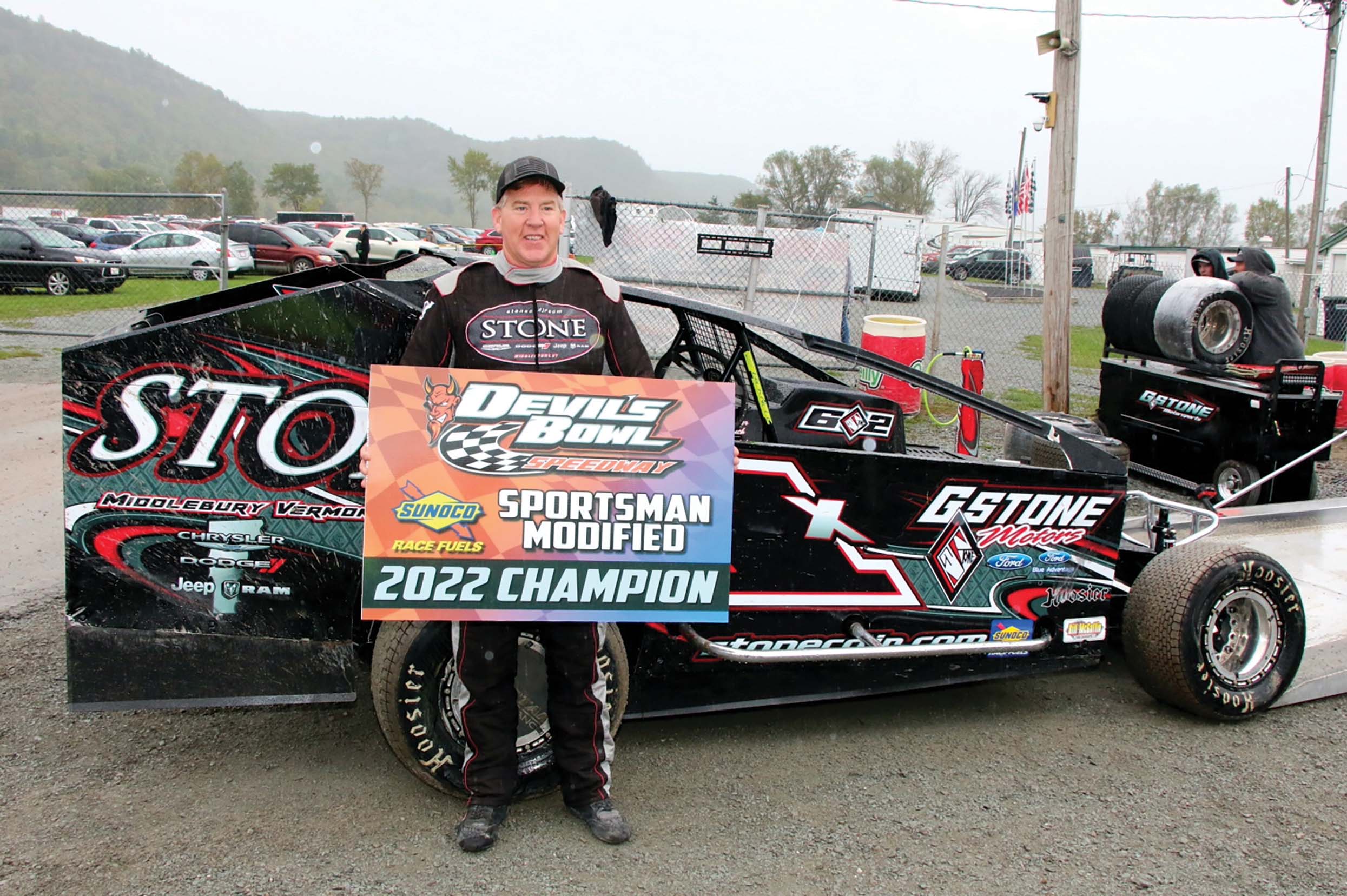