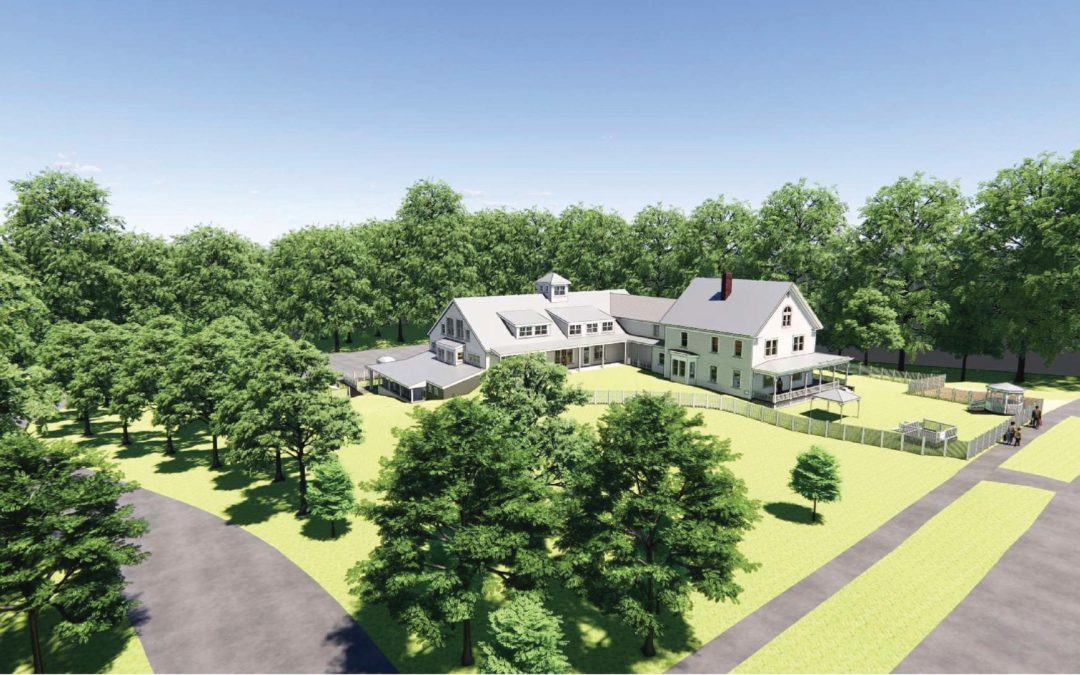 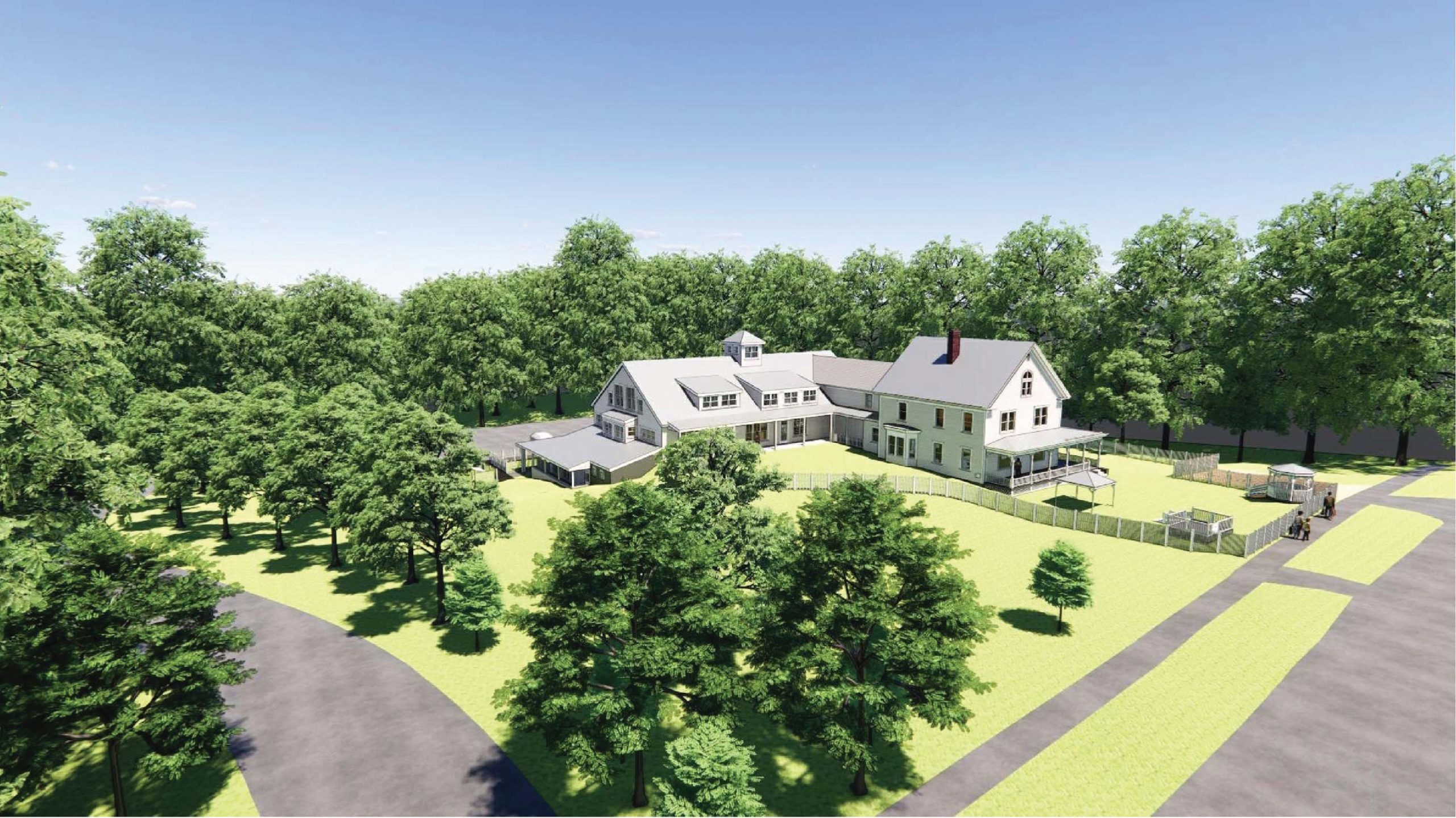 CONSTRUCTION COULD BEGIN next spring on a major expansion and renovation of the Otter Creek Child Center at 150 Weybridge St. This architectural rendering shows how the center could accommodate a two-story addition to the back and left of the current building.
By John Flowers

MIDDLEBURY — Planning and financing is starting to come together for a Community Child Care Expansion Project at 150 Weybridge St. in Middlebury that would bring up to 77 new childcare slots and 28 new jobs to our area by the spring of 2025.

That pending, $10 million project — combined with a concurrent effort by the Congregational Church of Middlebury to host a 24-slot facility within its downtown campus — would provide a critical infusion of childcare services in a county that, according to the non-profit advocacy group Let’s Grow Kids, needs an additional 452 childcare spots just to meet the needs of working parents with youngsters ages 3 and younger.

“I think it’s something Middlebury and the whole county really needs,” said Linda January, director of the Otter Creek Child Center (OCCC) that’s the focal point of the 150 Weybridge St. project. It calls for renovating the OCCC and equipping it with a 12,000-14,000 addition.

“It will put a nice-sized dent in the childcare shortage,” January said. “It won’t completely solve the problem, but it will definitely ease the pain. For a lot of families”

It was a year ago that the Independent first introduced the project — more than three years in the making — to the community. A 12-member Community Childcare Expansion Team was formed to plan, and advocate for, the expanded center. And the team has had a very solvent and influential ally: Middlebury College, which recently confirmed an approximately $4 million financial commitment to the center — not only in dollars, but in real estate. David Provost, the college’s executive vice president of finance and administration, said the college is donating the 2.5-acre Weybridge Street parcel just west of the OCCC that will make the building addition possible.

The college’s support is contingent on an endorsement from the institution’s board of trustees.

Middlebury College’s interest in the childcare expansion plan is heightened by the fact that in addition to having scores of employees in need of childcare services, the 150 Weybridge St. project will absorb programming at the College Street Child Center (CSCC). Currently located at 228 College St., CSCC employs nine teachers and is licensed for 24 children.

Advocates have mapped out a tentative timetable calling for a spring 2023 construction launch at 150 Weybridge St. that’s to involve two phases.

Phase one, according to Community Childcare Expansion Team spokesperson Cheryl Mitchell, will center on site work, installing a driveway and parking lot, and erecting a two-story addition of at least 12,000 square feet at the northwest end of the current OCCC building.

Phase one is expected take 13 months, leading to OCCC programming moving into the new addition during the spring of 2024, thus making way for “phase two”: A complete gut rehab of the early 20th century farmhouse that OCCC has called home since its founding in 1984.

Phase two is expected to take around a year, culminating in full occupancy of the expanded childcare center by Feb. 21, 2025, project advocates estimate.

The Community Childcare Expansion Team has commissioned Waltham, Mass.-based DW Associates Architecture Inc. to produce renderings of what the completed project would look like. The renderings show an addition that’s harmonious with the rural residential appearance of the OCCC farmhouse. The design depicts sweeping wraparound porches, white fences, and ample grounds on which “multiple age-appropriate, nature-based playgrounds” would be installed,” according to a project narrative.

Organizers have been diligently applying for grants to help underwrite the ambitious project. In addition to seeking a $1 million Community Development Block Grant, advocates have applied for a $350,000 grant through the Northern Border Regional Commission, and $100,000 through Let’s Grow Kids.

And there’s another large grant prospect: A major cut of a $10 million fiscal year 2023 federal earmark that U.S. Sen. Patrick Leahy, D-Vt., has requested for Let’s Grow Kids “to establish a fund for the expansion of childcare facilities in various Vermont counties.”

Mitchell said Middlebury’s childcare initiative could be in line for $3 million of that earmark, should Let’s Grow Kids land it.

But project boosters aren’t just pinning their hopes on grants. They’re looking for buy-in from some of the county’s largest employers, with Middlebury College having already set the tone.

“(The college) has been looking at this project for years, and they’ve looked at a couple of other sites, and none of them have really worked out,” Mitchell said. “Then someone said, ‘Why not just add on to OCCC?’ It made so much sense, because it’s right there in the downtown and it’s walking distance for so many people who work there.”

Mitchell is a legend in the Addison County childcare field. She co-founded the Addison County Parent-Child Center, which has become a model for not only dispensing care to children, but also for imparting parenting skills to young moms and dads so they can build self-sufficient and caring households. She served 10 years as deputy secretary of the Vermont Agency of Human Services under former Gov. Howard Dean.

So when someone with that kind of resume says, “This is the most childcare-positive climate I’ve ever seen,” people pay attention. Mitchell is basing her observation on the 150 Weybridge St. project, the Congregational Church project, and growing support for childcare and pre-K initiatives at both the state and federal levels. Rising pay and tuition reimbursement opportunities for early childhood educators have also helped, according to Mitchell.

“The workforce will become more robust, so people won’t have as much trouble hiring staff in the future,” she said. “Once (the new center) is done, we hope it will be a hub for recruiting and training even more people into the childcare workforce.”

January is also upbeat about the future. She said her only trepidation is the environmental review 150 Weybridge St. will have to undergo as part of the permitting process. This will include an analysis of the buildings’ history. The barn was built between 1870-1900, while the farmhouse is a rebuild of an original structure that burned down during the early 1900s, according to January.

“I hope it doesn’t push our timetable back,” she said of the review.

But time is relative. It wasn’t that long ago that expansion was but a dream for OCCC officials.

“I feel extremely optimistic about the project,” January said. “For me, it’s been a long time in the making. So there are moments it feels very surreal that it’s this close to happening. It’s really exciting.”