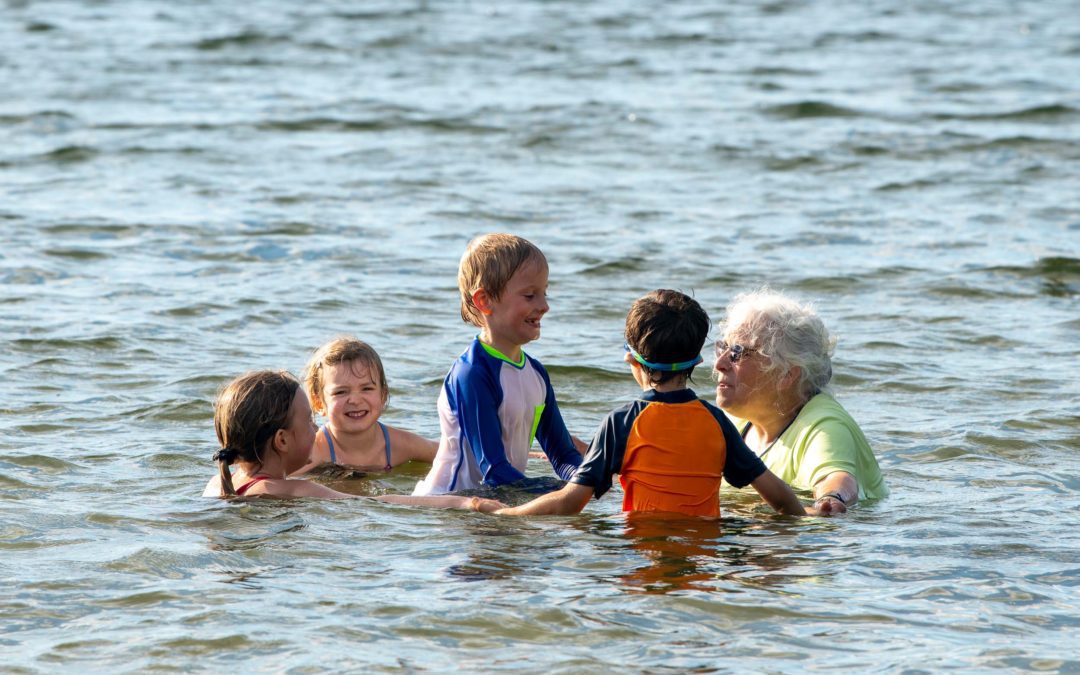 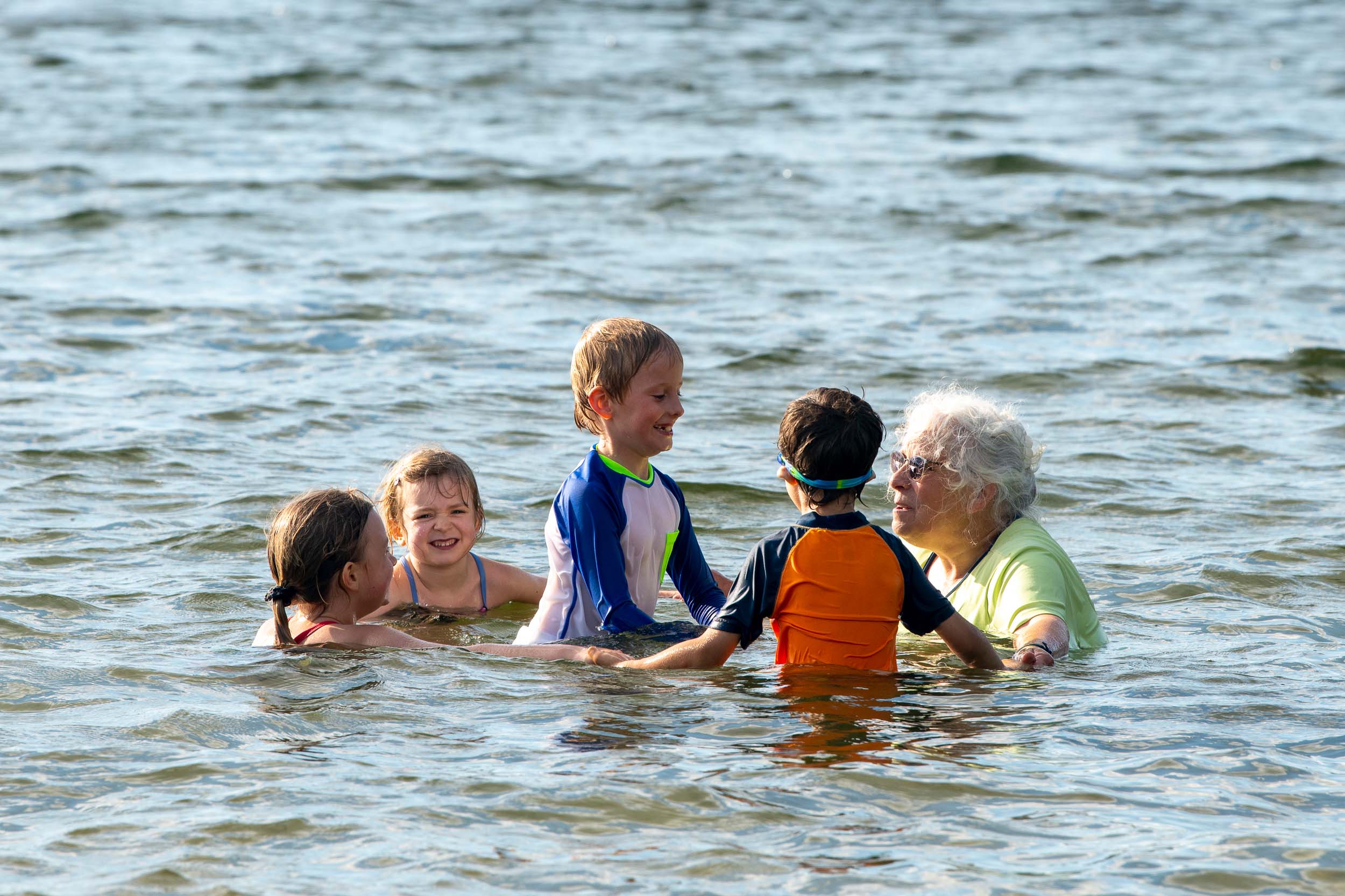 LONGTIME SWIM TEACHER Jake Jacobs gets right in the water with kids at Lake Dunmore and uses games to teach her young charges skills that could one day save their lives. The Salisbury resident has given swimming lessons for 47 years. Photo by Caleb Kenna
By Katie Futterman

SALISBURY — A fish out of water. That’s what Jake Jacobs is to the many excited, yet confused children who run into her at the grocery store. They tug at their parents, many of whom were also taught to swim by Jacobs just decades before.

“Holey moley,” Jacobs realizes when she’s greeted in such a manner. “I’ve been doing this for awhile.”

Jacobs is happy to see her young charges, and not-so-young-anymore former students. But it’s not just because swimming is a fun activity for kids.

“We have an obligation to teach children to swim,” the Salisbury resident said with a gleaming smile across her face.

She has upheld said obligation for 47 years, ever since she first took a swim instructor course in her junior year at the University of Vermont.

Jacobs grew up swimming recreationally, joined UVM’s swim team during her junior year before graduating in 1976, and then competed on a masters team from age 25 into her early 30s. She discovered that teaching swimming, which she does at Lake Dunmore and sometimes at the Vermont Sun pool, was a natural outlet for her.

However, swimming is not just something that she does for fun. Jacobs believes it is an essential, life-saving skill for people to have.

“My attitude has always been: If you love swimming, I’ll do whatever I can to help you find the opportunities and the outlets for that. If you hate swimming, I still want you to learn to swim,” she said. “Because I need to know you’re going to come home alive.” 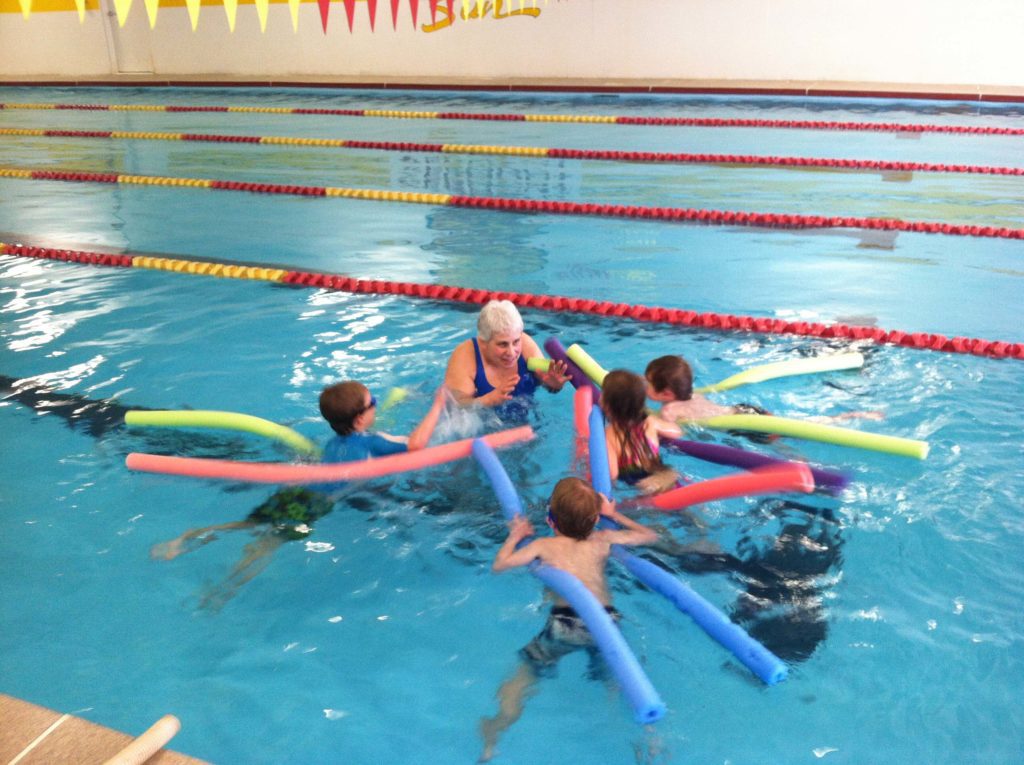 MOST CHILDREN FIND that Jake Jacobs’s lessons are quite fun, and still they come away with important life skills.
Photo courtesy of Jake Jacobs

Drowning is one of the leading causes of deaths among young children, and Jacobs believes kids need to have the skills to be equipped to handle it.

“It concerns me that in a state like Vermont, where we have so many places that people have access to water, so the dangers are there, but we have really limited opportunities for people to have their kids engage in swimming lessons and learn to swim,” Jacobs said.

She has honed her teaching philosophy and skills over the years. In her swim lessons, she “shares the burden” with the swimmer. Instead of simply telling them what to do, she provides them with options, including what they might be ready for, and how much help they might need.

“I build from where the strengths are,” she said. “If they’re willing to get in and walk and figure out how to paddle their arms, with or without assistance, that’s a start.”

Jacobs often hides skills within games. One such popular game (so popular, in fact, that adults who had her as children still ask about it), is the frog trap game, in which students need to blow bubbles to get out of a trap (Jacobs, of course, does not literally trap any children). For many of her students, it is the first time they will submerge in the water.

“I won’t tell them that they’re actually learning the skills if you don’t,” she said, with a laugh and a wink.

In addition to working with different town recreational departments, including Brandon’s summer program, for which she has worked for the past 10 years, Jacobs runs her own small group lessons. She begins receiving emails in February, and puts together groups on a first-come basis.

Her lessons typically run for about 30 minutes.

“While children could go longer, I’d rather have a really intense half hour, where they’re fully engaged,” she said. “I want them to get out tired, wet and hungry … and happy!”

She is a strong advocate of starting young. Jacobs takes children as young as 6 months in the pool in order to get them acclimated to the water. She recommends that parents of young children check with their pediatrician before starting lessons at Lake Dunmore, where she teaches during the summer. Her youngest children at the lake are usually three, with some two-and-a-half-year-olds. These youngest groups, or, as Jacobs calls them “Tadpoles and Frogs,” welcome both kids and parents in the water.

Unlike many teachers’ philosophy of discouraging parents from accompanying students in the water during lessons, Jacobs believes that parents are integral to the swimming process.

“A young child, in particular, having swim lessons doesn’t take the place of supervision,” Jacobs said.

In between lessons, she leaves a 15-minute window to talk with parents. She encourages them to continue the games that she plays with the children, and educates them about the potential dangers of water.

This effort is not without payoff. Every now and then, Jacobs gets a message from a parent about a dangerous situation in the water, and they tell Jacobs, “Because of those lessons, we knew what to do.” Jacobs has a whole notebook of cards and notes from children; these messages mean the most to her.

“That’s gold. It’s worth everything,” she said. “I couldn’t ask for more than that. If you save one person in your lifetime, how much is that worth? And I get to have all the fun in the meantime.” 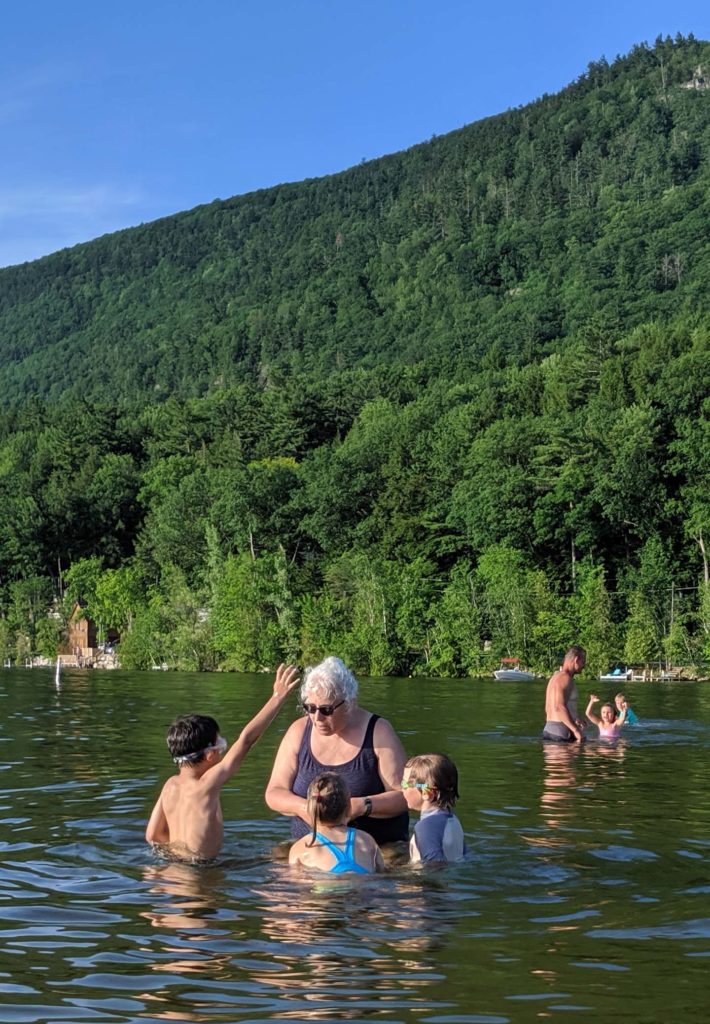 JAKE JACOBS’S YOUNG swimmers hang on her every word during a swim lesson in Lake Dunmore. She likes that she gets a front-row seat when kids accomplish something new.
Photo by Megan James

The only summer that Jacobs has not been in the water with kids was 2020. She was able to resume her outdoor lessons in the spring of 2021, but she has yet to return to indoor lessons, which she previously ran throughout the winter in the pool at Vermont Sun.

When children returned in the spring of 2021, Jacobs said, there was a huge change in their behavior. Whereas in the past children had warmed up to her and the other children fairly quickly, that year, kids were hanging onto their parents and keeping the distance they had been taught to keep from peers.

The good news is, swimming lessons provides benefits beyond just the swimming component. Jacobs recalled a highlight of her career thus far, when Mary Hogan Elementary School received a grant to offer every first and second grade student swimming lessons as part of the PE curriculum, and she was the teacher.

“We really saw a big overlap of broadening skills,” she said.

As a result of such lessons, students demonstrated an increased willingness to take chances in other aspects of the curriculum as well as confidence and ability to mix with kids who they had not been friends with prior.

Furthermore, Jacobs places an emphasis on survival tactics. Even swimmers who come to her from the swim team with fast times often do not have the skills that Jacobs believes are necessary.

For instance, she said, kids need to know what to do if they fall off of a sailboat, or get carried through the current of a rocky river. She has incorporated some of these survival skills when she teaches more advanced lessons.

If only Jacobs had more time to spare. Despite what one might think, swimming is not all that Jacobs does. She actually has a day job, too. Jacobs is the coordinator for the UVM Agricultural Risk Management education program, where she works with producers and agricultural colleagues throughout Vermont and the Northeast to assist farmers in planning to lessen risks on their farms. Her work provides information, resources and helps farmers who want to access federal programs such as crop insurance and disaster assistance.

Jacobs said she loves her work, and thinks it is of great importance. However, she will always have a passion for swimming, which she squeezes in at the end of the workday, and juggles scheduling with her day job.

“I get a front row seat when this child, who is full of wonder, magic, excitement, exuberance, they come with everything, and they do something new for the first time. I have the front row seat when they say, ‘Look what I can do!’ I get that. The parent is a few feet away. I’m in the front … I’m right there. I get to share that moment. It’s huge.”

So, what does the future hold?

“The day that comes when I say, ‘Ugh, I have to go be in the water with kids’ — that’s the day I have to take another look at it.”

But fear not, that time is nowhere close. Jacobs is quite content to continue teaching youngsters to swim.

“I never have a bad time in the water with kids.”