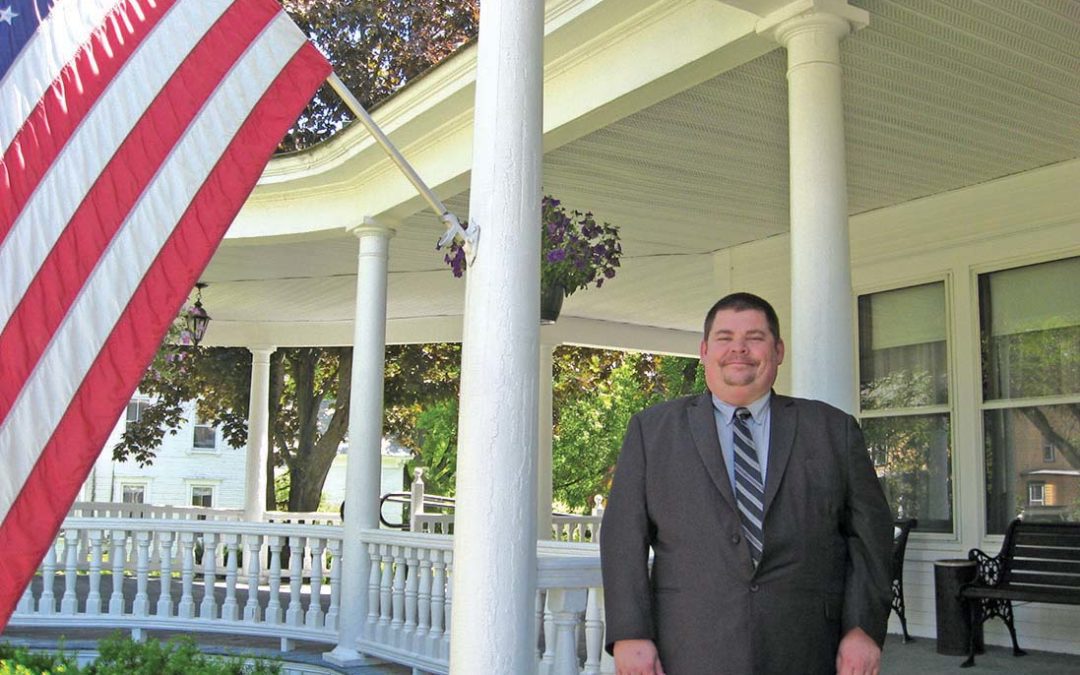 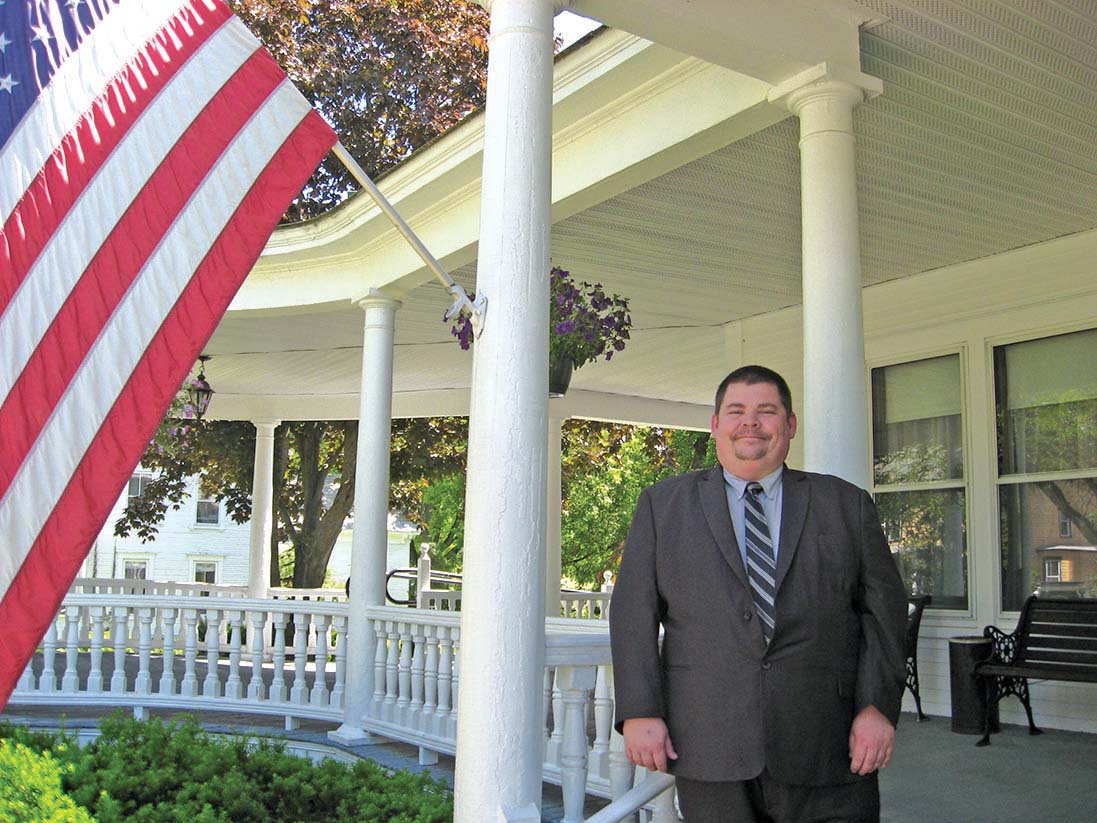 WALTER DUCHARME, THE director of Sanderson-Ducharme Funeral Home, stands on the porch of the Middlebury business he purchased almost two decades ago. He said that, like most others in his business, he is in the funeral services business because he loves to help people.
By Shayiq Shah

MIDDLEBURY — Sanderson Funeral Services is a trusted funeral home located in the town of Middlebury. It is notably the only funeral home in the area with an in-house crematorium.

The funeral home, known today as Sanderson-Ducharme Funeral Home, was founded sometime in the early 1900s by Buzz Waite and company. Ownership of the funeral home changed hands several times over the ensuing century until Walter J. Ducharme purchased the funeral service business in 2005. Sanderson Funeral Service is now a family owned and operated funeral home, one that according to Ducharme has “built trust within the community.”

How does a funeral home earn the trust of a community? To answer that question, one must first comprehend the “unique business” that owning a funeral home is.

“Running a funeral service is not like your typical business,” Ducharme said.

“The phone may ring anytime, whether is it is the middle of the afternoon or 3 a.m. in the morning and we have to be ready,” Ducharme commented on the funeral home’s readiness to always offer help and support to members of the community.

However, what this support looks like is hardly consistent. Ducharme acknowledges the uncertainty that comes with running such a business.

“We serve all nationalities, faiths and religious groups,” he said. “People have different customs and practices to honor their departed and we attempt to honor these traditions to the best of our abilities here.”

With these customs being so unique, Ducharme prefers to meet with the families and understand their wishes and expectations and attempt to reconcile them with the facilities available to him.

“We serve people through a very trying time. Therefore, we try to individualize and customize our services as per the wishes of the family members to honor the departed’s memory,” he said.

Such a process has meant that Sanderson’s has engaged in a large variety of funeral traditions from green burials and earth burials to cremations and more.

Along with honoring the traditions of the funeral service itself, Ducharme and his Sanderson associates also weigh and work with the wishes of the departed or their family members about the location of the burial.

“We have helped family members transport their departed to burial grounds where they had wished to be buried for sentimental reasons whether that be somewhere in New England or even other places outside of the U.S.,” Ducharme said.

He recalled stories in which Sanderson helped a family fly their departed to France to be buried alongside their mother, to Jamaica for the departed to be interred in their familial burial grounds and even as far away as Russia.

“We help families with all the necessary paperwork and clearing the process through customs to ensure their and their departed’s wishes can be maintained,” Ducharme said. “It is a tedious process that involves long hours of research and paperwork.”

At times, the departed cannot be buried in their desired location soon after their passing — a case common with former members of the armed services.

“We have aided in the funeral service of a few army generals who had wished to be buried in the Army’s burial grounds,” Ducharme remembers. “At times we have had to hold the deceased’s body for a period up to three months in our on-site refrigeration units.”

Even with this set of unique challenges, why does Ducharme pursue such a business?

He got involved in this business around 1995 on account of his father-in-law, who was a funeral director himself. Ducharme took an interest in the work, learned more and became a licensed funeral director in 2000.

This zest for helping people has been constant throughout Ducharme’s life as he spent 32 years as part of an EMT in the Advanced Rescue Team in Castleton.

Ducharme said he tries to ensure that Sanderson goes “above and beyond” by having crafted a program for funeral services that families can opt for. Apart from just being the funeral director, Ducharme said he wears several different hats, filling a variety of roles at Sanderson. Sometimes that means being a celebrant of the funeral ceremony, other times he acts as a representative of the family when dealing with embassy or consulate officials for a foreign burial.

Not just Ducharme, but other Sanderson employees have diverse skills on account of their education backgrounds in fields such as cosmetology, ethics, restorative art, physiology, human psychology and grief counseling.

However, the thread that binds all these different pearls together is the motivation of providing comfort and peace to people in trying times.

“We, who work here at the funeral home, often get asked about how we can do such a job that others probably can never think of doing,” Ducharme said. “Our answer is simple: We are in this profession because we want to help people in times of need and give them the closure they need.”