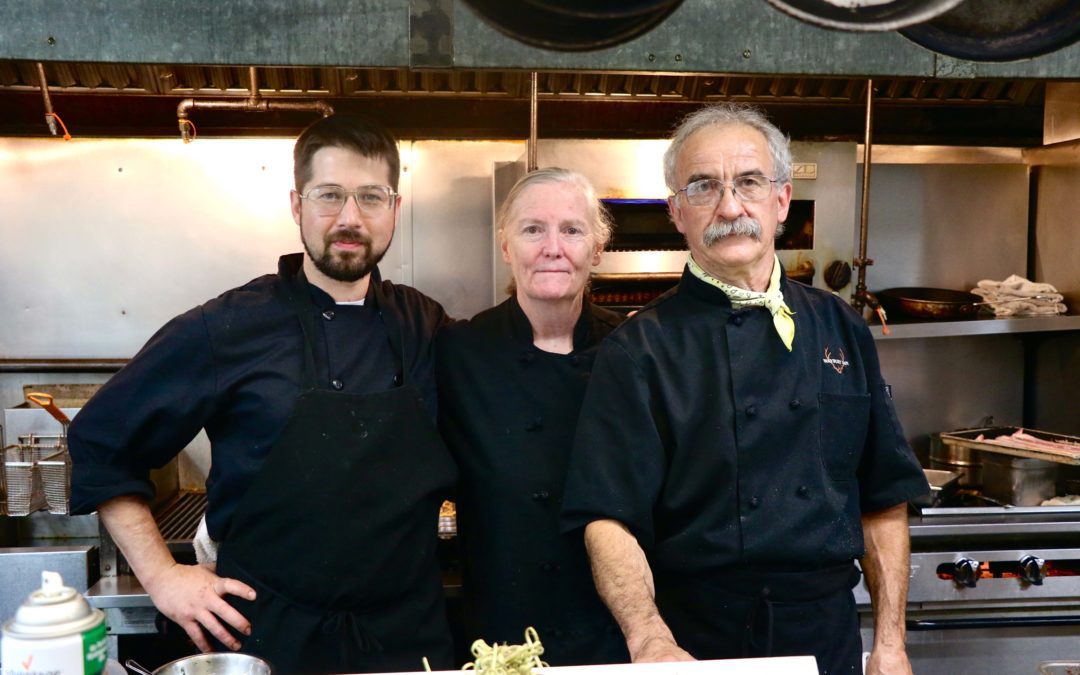 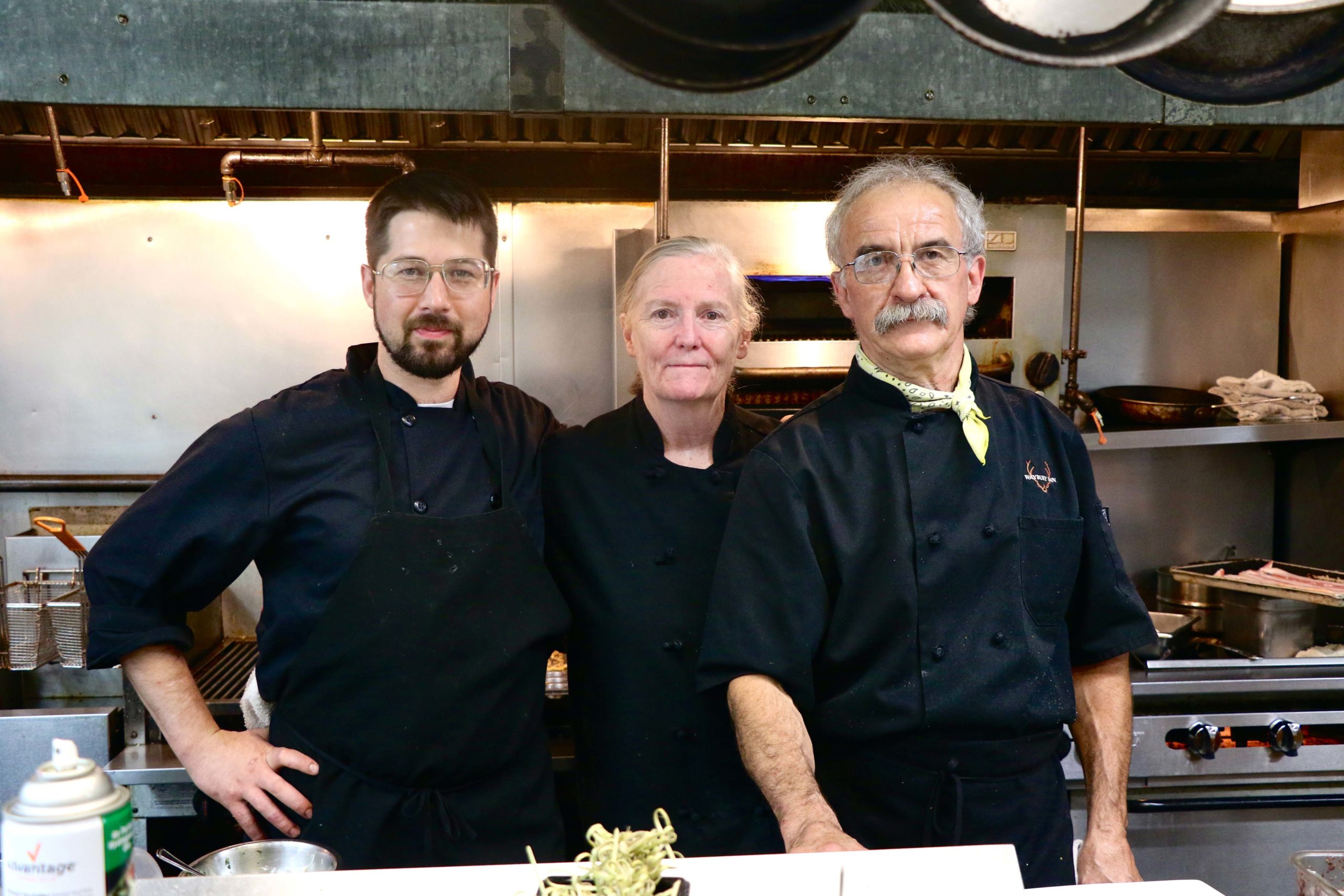 DONNA SIEBERT, WHO has headed the kitchen at East Middlebury’s Waybury Inn, is flanked by incoming head chef Tony Petri, left, and long-time assistant chef Christian Grollier as they work side by side preparing dishes for a private event. Siebert is still in charge. Independent photo/Steve James
By Sam Lipin

The Waybury Inn in East Middlebury has been serving delicious food to the community for over 200 years, and for a remarkable chunk of that time — one-fifth of those two centuries — one person has overseen the kitchen. Donna Siebert, who grew up across East Main Street from the Inn, has seen food fashions come and go and managed to keep the Waybury’s restaurant and substantial catering business at the top of its game.

Now, after 40 years as its head chef, Siebert is now training another Addison County native devoted to food as the Waybury’s new head chef.

On July 1, head chef Donna Siebert welcomed Tony Petri of Middlebury to begin training to become the new head chef of the restaurant. Although she is handing over the reins of the kitchen, she will remain heavily involved in the restaurant and has no immediate plans to retire.

“I’m not going anywhere and we’re still a team,” Siebert said in a recent interview. “It’s just that I’m handing over a lot of the spatulas.”

“And paperwork, too,” Petri added.

Siebert, 65, has been the head chef since 1982. She began working there in 1969, back when her parents owned the Inn and lived across the street. At 12 years old she first worked as a dishwasher — though always awaiting the call from her father for her and her six siblings to take off the aprons and sit in the living room when the health inspectors arrived — and then a server when she was 16 until she went to college at the Castleton State College.

After a year of school, Siebert decided Castleton wasn’t meant for her, and she decided to take a year off to apply to other schools. However, soon after returning home, one of the cooks of the Inn unexpectedly departed and Siebert’s mom asked her if she’d rather cook than be a server.

“I said oh heck, I might as well try cooking,” Siebert recalled.

She had grown up in kitchen so it was a natural transition. Though the opening and her subsequent filling of the cooking job was coincidental, her love for her craft is anything but. “Through all the ownerships, I’ve always loved the food,” she said. “It’s creative, it’s delicious; I like pleasing people and I love to eat.”

Siebert began cooking at 19 years old, became the head chef at 25, and the rest is history. Along the way Siebert was joined in the kitchen by another chef, Christian Grollier, who himself has been creating tasty meals in the Waybury kitchen for 31 years.

Though Siebert, together with Grollier, has always adjusted the menu to accommodate the ever-changing palate of the customer, the kitchen has maintained its high quality and respect within the community. All of the food is made from scratch and they source as much of their food locally as they can.

“She has built the food reputation here with Christian as the right hand man,” Waybury owner Joe Sutton said. “I have never been as confident in the kitchen and food product as here. I just don’t have to worry about it.”

Asked about her favorite dishes, Siebert said there were too many to choose from. But she was especially proud of the maple balsamic vinaigrette she came up with 35 years ago; her extravagant wedding cakes that took the form of birch trees, keyboards and the Waybury garden; and the sesame crusted salmon currently on the menu. 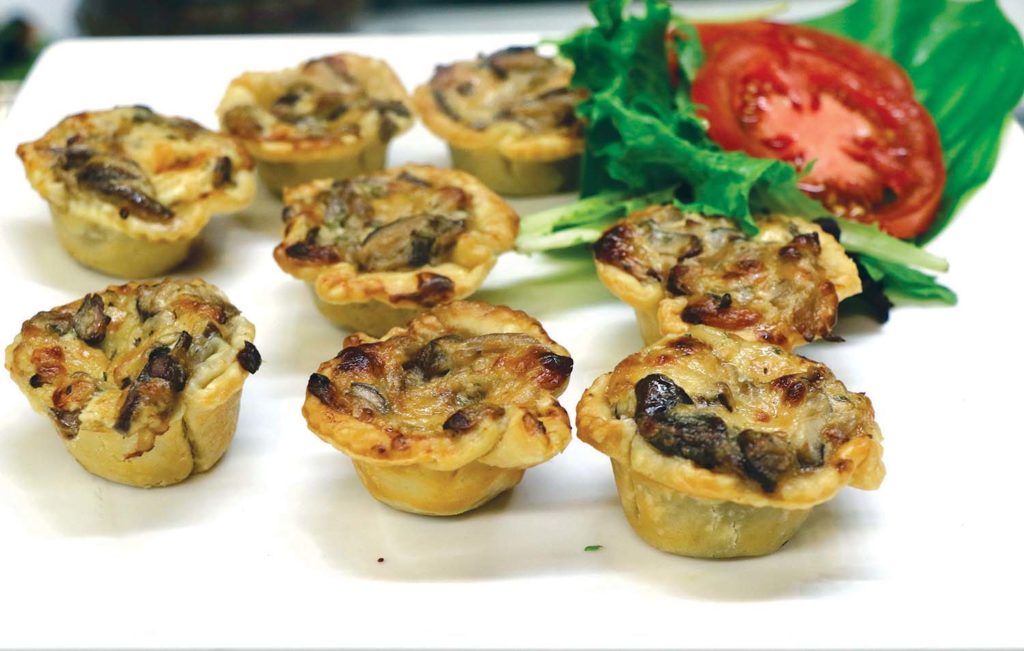 AMONG THE DISHES that the Waybury Inn’s chefs have developed for its in-house and catering businesses are these mushroom tartlets, one of five snacks you can find on the restaurant’s menu.
Independent photo/Steve James

In her four decades as head chef and more than half a century of working in a kitchen, Siebert has mastered the science of managing a kitchen and is prepared to pass on that knowledge to a new head chef.

“Being a good chef is a huge math equation: it’s time, temperature, labor and pounds,” Siebert said. “80% of being a chef is not that which you see on a TV show; it’s purchasing, prepping, cleaning, cleaning and cleaning some more.”

Although Siebert is adamant she could continue to serve as head chef if she wanted to, she is handing over some responsibility to a new chef so that she can spend more time with her two children and five grandchildren. “It’s time to have some new young blood,” she said. “It’s not that I couldn’t keep doing it, I could, but it’s just time for a change.”

Incoming head chef Tony Petri is no stranger to the Waybury Inn and the surrounding community. Like Siebert, who grew up across the street, Petri was raised up the road and his family is well-known at the Waybury. “The food is sourced within 15 miles, but the chefs are sourced within a block,” Siebert joked.

In fact, Petri had repeatedly applied to cook at the Inn when he was in middle school and high school, only to be denied on account of his age. “When I was a kid, I applied here every summer, and Donna would always reject me saying, ‘You’re too young,’” Petri said.

Petri’s first kitchen job at 15 years old was at Middlebury College’s Bread Loaf campus in Ripton. Upon graduating high school, Petri studied at Ithaca College and then remained in Ithaca, N.Y., for about 10 years working at several restaurants. Those restaurants include the Carriage House Café and The Heights, where he still works part-time for some extra income.

He has now returned home to Addison County to manage the kitchen that rejected him all those years ago. “I’m incredibly happy to be back here and grateful to Joe for giving me this opportunity to come back and serve the community that’s raised me,” Petri said.

Although Petri has a lot of work to do before he fully takes over as head of the kitchen, he brings with him over 15 years of experience and his own cooking preferences — specializing in Mediterranean and Aegean cuisine — to meld with the current fare at the Waybury.

“I’m very excited to carry on the traditions that have been established here at the Waybury and also to create my own and to impart the unique styles I’ve developed the last 10 years in Ithaca and bring them back home.”

“Everybody in this community is so excited for Tony to be here and for me to have more time with my family,” Siebert added.

At this juncture, Siebert, Petri and Grollier are working side by side to ease Petri’s transition. Though that does not mean it’s been all stress-free for Petri. “It feels like a month has gone by, just based on the sheer amount of information that’s been thrown at me,” Petri said at the end of week two. “You should see my notes.” 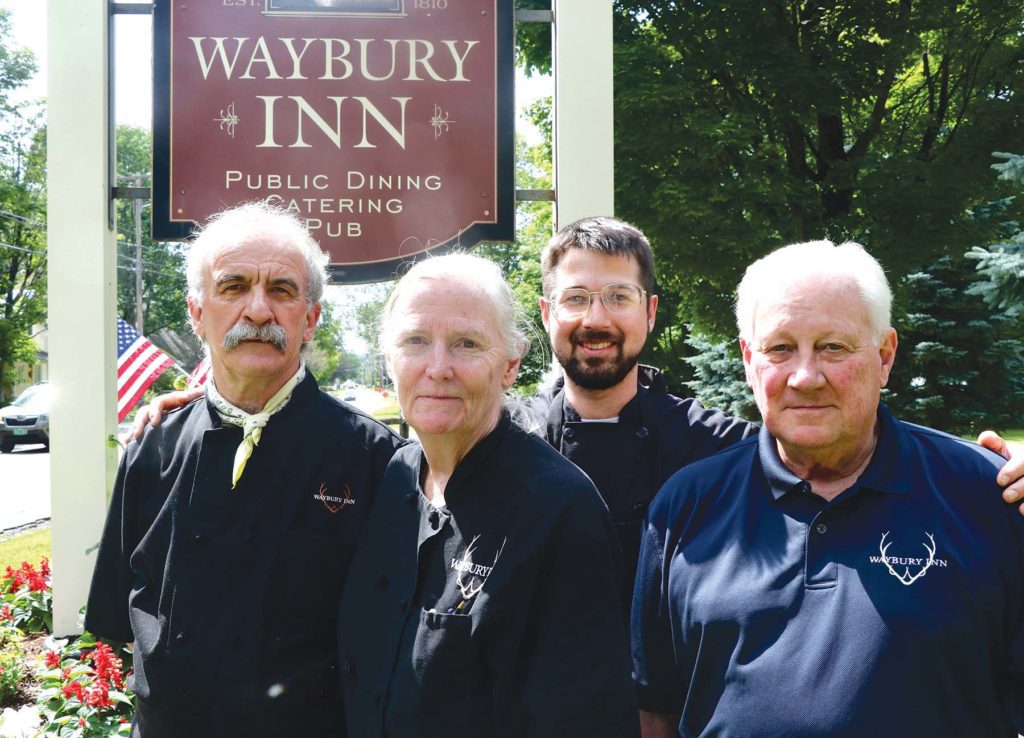 Apart from serving dinner five nights a week — now without Siebert, who preps from the morning until dusk before returning home — the Waybury Inn also does a lot of business catering and hosting private events.

Sutton estimates that the Inn served about 20 events in June, on the property or elsewhere. In those cases, there might only be one chef — Grollier or Petri — in the Waybury kitchen while the other attends to the event.

Despite the daily stress of the kitchen, Siebert is proud of the atmosphere she’s cultivated. “I’ve cooked for over 40 years and I would like to think this is one of the most polite kitchens you’ll ever be in,” she said.

It’s not time to say goodbye yet, but many feel it’s past time to celebrate the career of a woman who has made the Waybury Inn her own.

“I have loved my life here and I feel like I’m the luckiest woman alive,” Siebert said.