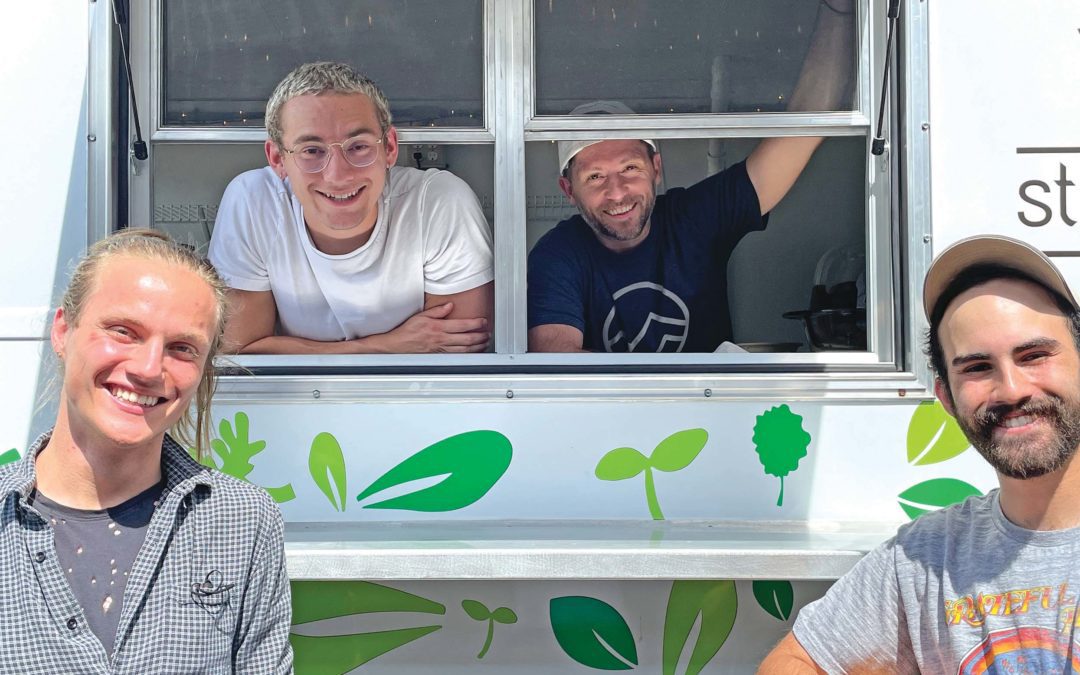 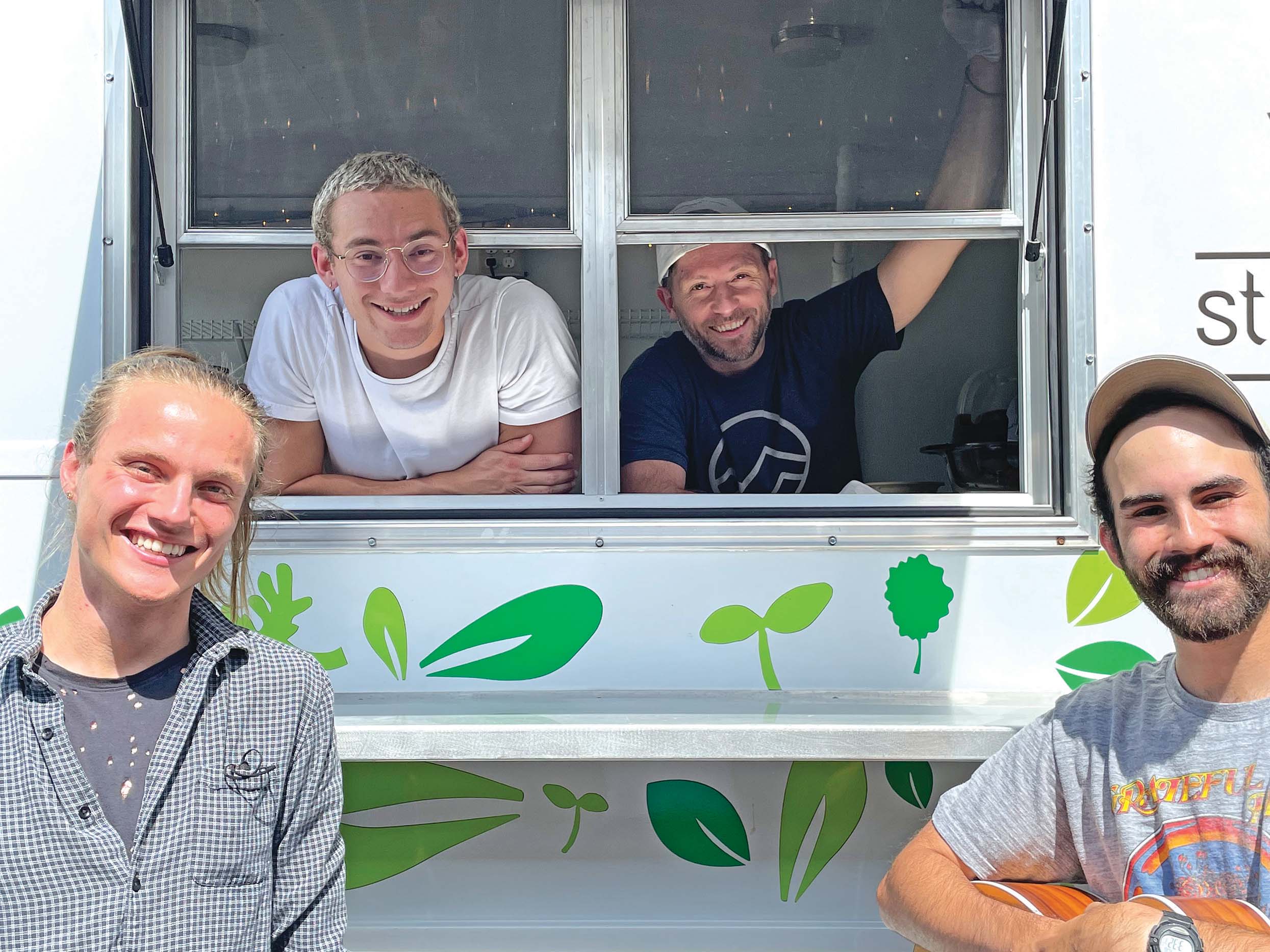 MIDDLEBURY — You might not see StreetGreens pulling into Foodaroo, downtown Middlebury’s annual gathering of food trucks that dispense inventive nosh options to enjoy with a hearty helping of outdoor entertainment.

But StreetGreens has carved out its own niche, delivering fresh, tasty food in front of locations like the Ilsley Library, Turning Point Center of Addison County and the Charter House Emergency Shelter.

Filling the bellies of people while they’re working toward self-betterment.

Or if you’re simply hungry.

And the price is always right.

StreetGreens is an offering of Bread Loaf Mountain Zen, a Buddhist community based in Cornwall that, according to its website, provides a “welcoming place to learn about and practice meditation, share Buddhist teachings, and to create relationships that are mindful, caring and responsive to the unmet needs of others.”

That credo of meeting the needs to others, which it does in part by offering hospice care at Bread Loaf Zen’s residence at 3958 Route 30, and dispensing food to the hungry through StreetGreens, a refurbished van.

Zen maintains a free apartment and related services for hospice patients. Joshin Byrnes, who leads the Zen group, is a certified end-of-life doula.

The group leads in-person and Zoom meditation sessions for anyone who’s interested.

Each summer, StreetGreens goes on the road, bringing free meals and snacks to places where people gather in order to build community. The program is managed by young adults and residents who are living and training at Bread Loaf Mountain Zen Community for the summer.

Byrnes founded the Cornwall Zen group in 2017. He is a former executive director of the Vermont Community Foundation. The Independentreached out to him late last week by phone, and connected with him — in Holland, where he was on a teaching tour.

Byrnes is a Zen teacher, and said community outreach is part of the group’s raison d’être.

“We don’t proselytize or anything like that,” he said. “Zen is basically a meditation practice, and for us it’s grounded in a set of ethical precepts. The mission of Bread Loaf Mountain really is to practice neighborliness and to bring people together. We try to do that in a mindful way, that’s aligned with Zen Peacemaker values.”

The group’s Cornwall home base is usually brimming with activity during the summer, as “peacemaker interns” visit for training. That training, involving men and woman of all ages, can last anywhere from two months to multiple years; some have lived at Zen’s Cornwall hub since its founding.

One of the longest running residents is Benjamin Harper, a recent Middlebury College graduate. Harper, 24, has been a Zen resident for more than two years, and next month will head off to Divinity School at Harvard University. There, he will train to become a Zen priest.

Friday, July 8, saw Harper helping out at StreetGreens while it was parked at the Charter House Emergency Shelter — a place he once hung his hat and washed dishes.

All of Bread Loaf Mountain Zen’s services and food are offered for free, thanks to a cadre of financial sponsors, according to Byrnes.

“We don’t sell anything, so it’s a community of people who practice generosity toward us that allows us to maintain our community engaged monastic lifestyle,” Byrnes explained. “They also fund our social action projects.”

Among them is StreetGreens, which the Zen group launched at the outset of the COVID pandemic. Zen had been operating a weekly free café in Rutland. When COVID rules forced closure of the café, they took the food on the road. 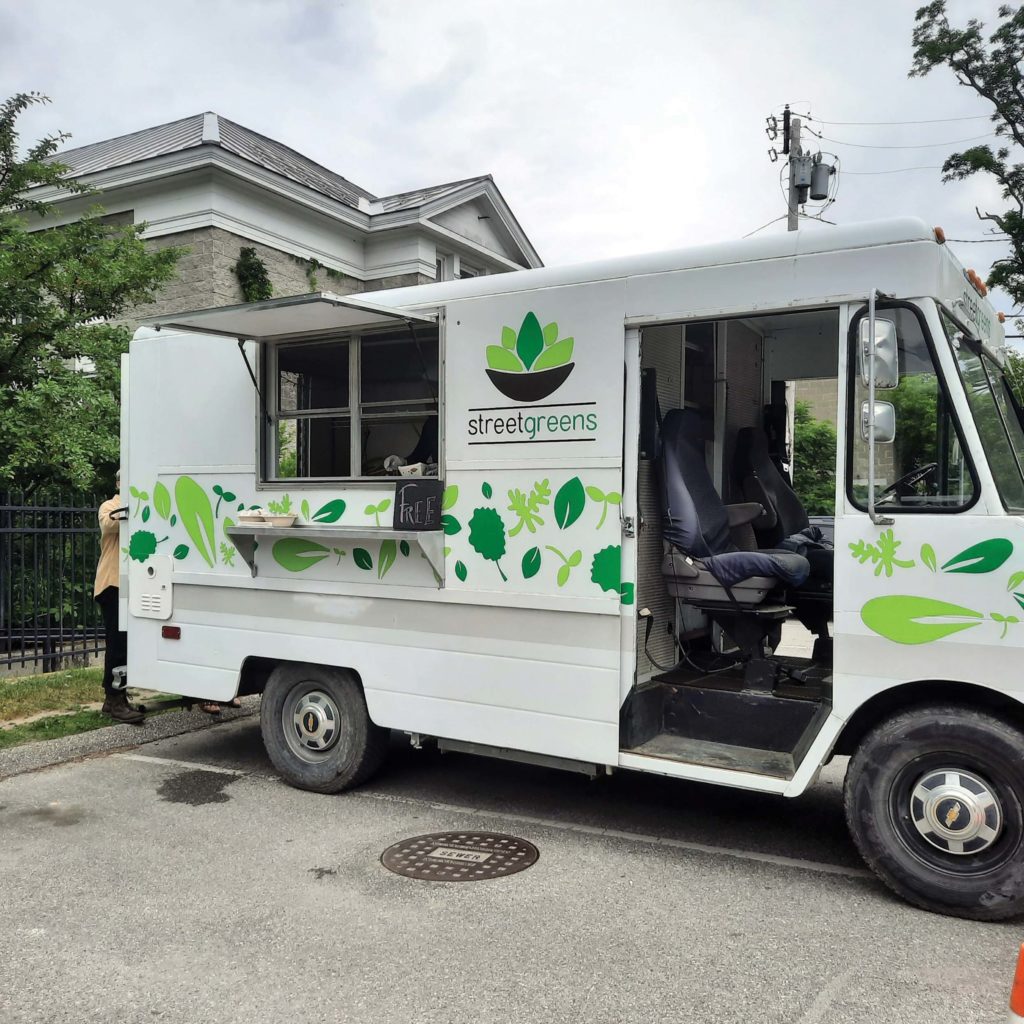 STREETGREENS, PARKED AT Middlebury’s Ilsley Public Library, is a project of the Bread Loaf Mountain Zen Community that dishes up free food to anyone who wants it during the summer.

StreetGreens’ wares follow Zen’s priority of offering “the freshest, best quality food we can afford,” Byrnes said. The group grows some of its ingredients in its Cornwall garden and sources the rest from local farms and grocery stores. Since Zen practice includes maintaining and operating a kitchen, the group easily knitted the food service component into its overall mission.

“We cook all of the food and maintain the truck ourselves,” Byrnes said.

While members of the Zen community are vegans or vegetarians, they acknowledge that not everyone else is. So they’re willing to mix in meat in a rotating StreetGreens menu that on a given day might include sandwiches, veggie quesadillas and pastries.

On this particular day, quesadillas and blueberry cobbler, a recipe Harper snagged from his grandmother, were offered up to anyone sidling up to the StreetGreens window.

“It’s free food and it doesn’t come with any strings,” Harper said during a brief break from the counter. “You don’t need to come to meditate with us… This is for you. It’s free in every sense.”

The “free” aspect continues to raise eyebrows among some who wander up to the truck.

“People don’t know what to make of it sometimes,” Harper  said. “What do you mean, ‘it’s free?’ Don’t you need my email address or a (gratuity) or something? It’s been really fun to get to say ‘no.’”

StreetGreens will continue to make its rounds in the Middlebury area before going into winter hibernation. You can find it at the Ilsley Library most Tuesday mornings (after 9 a.m.) and late Friday afternoons at the emergency shelter.

Those who run the van never know what the demands for food will be from day to day.

And that’s OK with them.

“There are days we only get six people, and some days we get 40,” Harper said. “I don’t think the success of this project is how many people we serve; it’s whether or not people feel seen. In that sense, if even one person stops by, I’m glad we did it.”

More information about Bread Loaf Mountain Zen can be found at breadloafmountainzen.org.