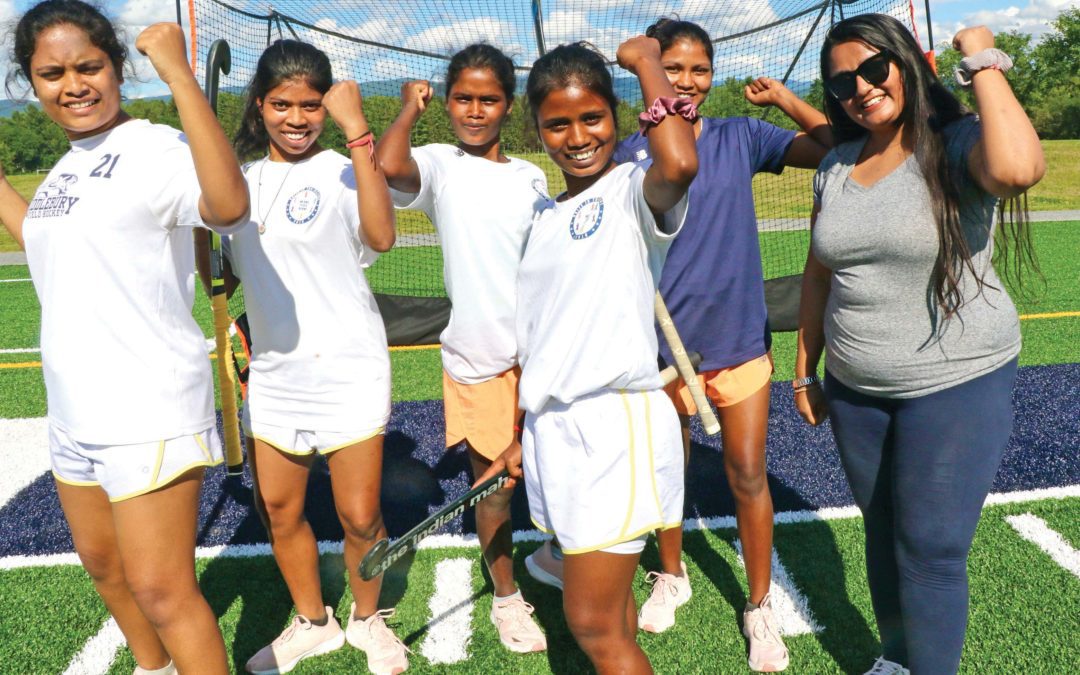 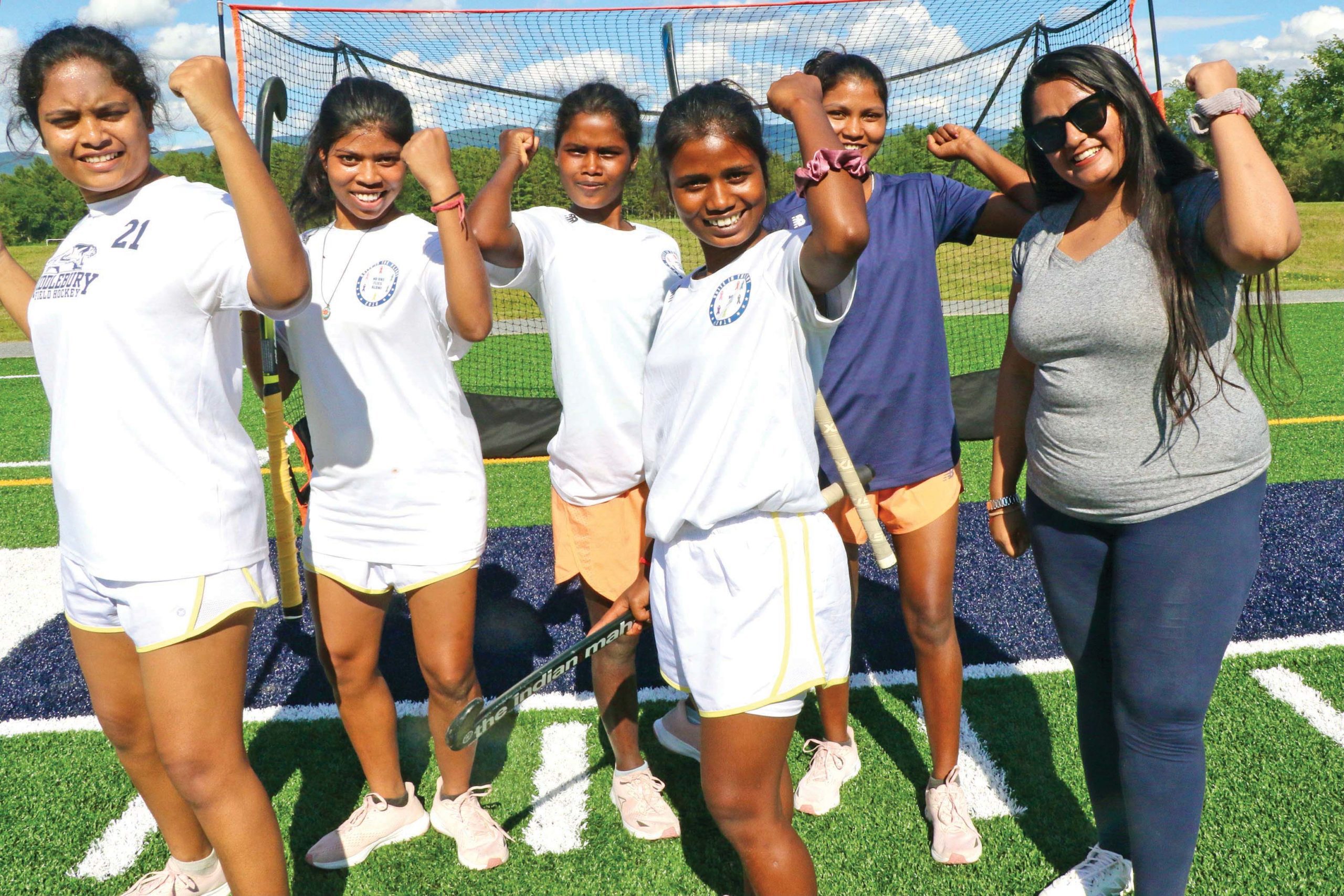 MIDDLEBURY — Henrita Toppo’s home in eastern India is more than 7,500 miles and a world away from Middlebury, Vt.

“In my village, girls are not allowed to go out after 5 p.m. because it becomes dark, and girls don’t have the freedom to roam where they want,” she said, through an interpreter, after arriving here late last month. “Also, I can’t go out and travel. If I do, the boys harass me on the streets.”

Toppo is one of five young women who came to Middlebury from Jharkhand, India, June 22, on a three-week trip to learn English, public speaking and self defense at Middlebury College. Pivotally, they also are playing a lot of field hockey while they are here.

The young women, who range in age from 16 to 19, were selected as the five best field hockey players from two field hockey camps that Middlebury College field hockey coach Katharine DeLorenzo led in 2018 and 2020 in the city of Ranchi. That’s the capital city of Jharkhand, a state in eastern India with a population of almost 33 million people.

“We are working hard to help them simply envision what the world could offer them,” DeLorenzo said.

Shakti Vahini, an aid organization dedicated to strengthening women and children’s rights in India, recruited the girls back in 2018 from around Jharkhand, a state that struggles with extreme poverty and has been a hub for human trafficking, forced labor and childhood marriage.

Jharkhand is also a hotspot for field hockey, the national sport in India, with many of the national team players coming from the region, including Nikki Pradhan, one of the most popular players in the country.

When the first camp started, the girls knew only that it was a field hockey camp and knew nothing about the broader goals of the program.

It came about because Baishaki Taylor, then vice president of student affairs at Middlebury College, had a connection to the consulate in Kolkatta (formerly Calcutta). In 2018 she met with a representative there who was looking for women who would spearhead a project to teach field hockey to girls in East India. 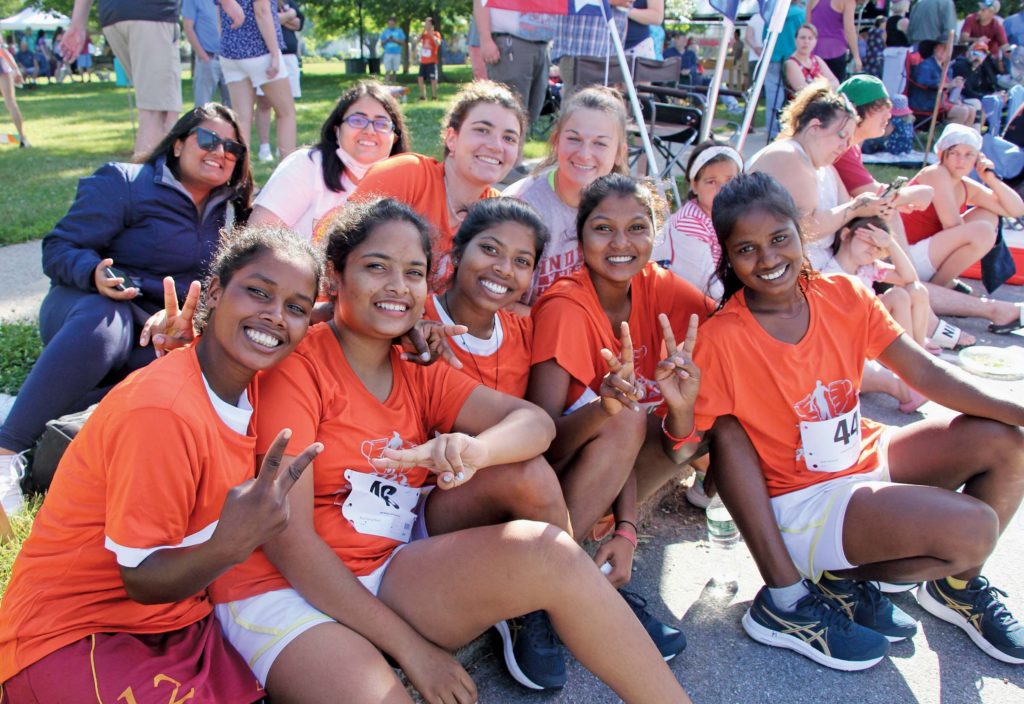 FIELD HOCKEY PLAYERS and their coaches who are visiting Addison County this month take a break from workouts to celebrate July 4 at the parade in Bristol.
Independent photo/Steve James

Taylor reached out to DeLorenzo, who has won four field hockey national championships at Middlebury. She, in turn, recruited some Middlebury field hockey alumni as well as her assistant coach Rachel Paumbo to go to Ranchi and lead a field hockey camp.

The camp ran in November 2018 and January 2020 for about a week each time. More than 100 young women lived in a dormitory, got to the field for practice at 7 a.m. and didn’t go back to the dorm until dark. After practicing field hockey fundamentals with Middlebury players and coaches, the Shakti Vahini sponsors supplemented the program by educating the young women on human trafficking. The camp in 2020 also included Middlebury College students as part of the J Term Bold Scholar program, in which a group of students taught English in an elementary school.

The program is currently funded through Shakti Vahini and the U.S. State Department’s Sports Diplomacy program, but in the future, the goal is for Middlebury College to deepen its involvement and funding for the program to continue the camps.

Paumbo described that first trip to Ranchi as “life changing.”

“My main thing is gratitude for the opportunity to share in the project and to use hockey to be a bridge between cultures, and pay attention to women and to attempt to empower them and inspire confidence, which is a lot of fun,” she said.

Anna Kenyon, who played field hockey for Middlebury College and graduated in 2016, is also one of the leaders of the program. She and Paumbo described the first time they went to Ranchi and discovered that many of the young women did not have shoes, and all of their pinnies (lightweight jerseys worn in sports scrimmages to tell the teams apart) had the same number on them.

“Logistically, we were going a million miles an hour from 5 a.m. to 11 p.m., just doing everything we could in order to create something out of nothing. And anything we asked for, someone was going to find a way to make it work,” said Kenyon.

They were able to return with more resources on the second trip. It was also significant to the people there that the same people from the first trip had all come back.

Kenyon described asking a translator how to say “girl power”; after a pause she learned it was “nari shakti.” She then had the girls huddle and, on the count of three, they all shouted, “Nari shakti!”

“It’s kind of impossible to describe how amazing it was to hear these young women shout ‘girl power,’” Kenyon said. “They’re not meant to talk, they’re not meant to feel powerful. That’s not really allowed for them, as far as what we’ve been told by our partners at Shakti Vahini. That concept of women’s empowerment is pretty foreign.”

There is a lot of social support for field hockey in Jharkhand, making it a useful tool for empowerment, according to Kenyon. 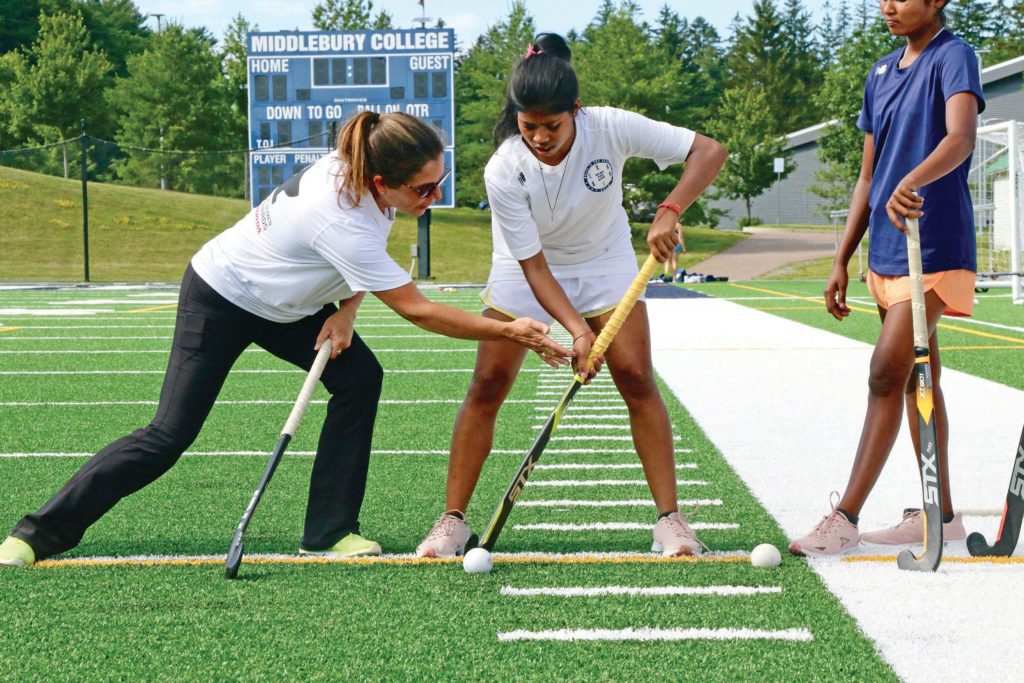 “Hockey is absolutely their favorite thing, and you can just tell,” she said.

And they’ll do anything to be able to play.

“When I was selected to play field hockey, I didn’t have a stick to play. My mother said we didn’t have money to buy it. I used funding at my school to get a hockey stick. I didn’t have the money to travel to the field to play, so I bought a bicycle with a lot of hardships,” said Priyanka Kumari

Their visit marks the first time these women have left their villages. Kenyon described a remarkable curiosity around learning English and meeting new people, accompanied with the challenges of homesickness and difficulty with the language and food.

“The women in the village, any female has to wear fully covered clothes. I got a bit of a culture shock because here in the U.S. people do wear everything,” said Toppo.

They are also taking self-defense courses with Marcus Kim, and working with Middlebury’s oratory department to develop public speaking and oratory skills.

As for field hockey, there is daily running, lifting and field hockey skills work. They are participating in the “Game On” field hockey league in greater Burlington at UVM and St. Michael’s College.

The young women are also getting a broader taste of American society and culture. They got a tour of Vermont Statehouse in Montpelier on July 5 with former state legislator Albert Perry, who represented Richford in the capital but now resides in Middlebury. They will also take a trip to Boston on July 8 to see a Red Sox-Yankees baseball game, courtesy of Red Sox President Sam Kennedy.

They will conclude the trip in Washington, D.C., as guests of Patti Hoffman, former U.S. Consul General in Kolkata, India, and David Kennedy, a former official in the U.S. Embassy in New Delhi.

The young field hockey players will depart for home on July 12.

Paumbo said selecting the five women who could come to Vermont was difficult, but they were limited to a small number. And the goal is for these young women to go back and make an impact on their communities.

Kenyon and Paumbo recognized that they couldn’t make big changes themself, but instead, they could make changes through the young women sharing what they learned with their communities.

“We need them,” said Paumbo.

Through Kant, the young women all expressed their gratitude to be here, and their excitement to go back home to urge everyone they know — and everyone they don’t know — to go to hockey camp so they can do well and learn English.

“I hope even more coaches can come (from other colleges) as well as Katharine in the future,” said Purnima Neti.

Juhi Kumari added: “I hope even more people can do it, and do even better than me in the future.”