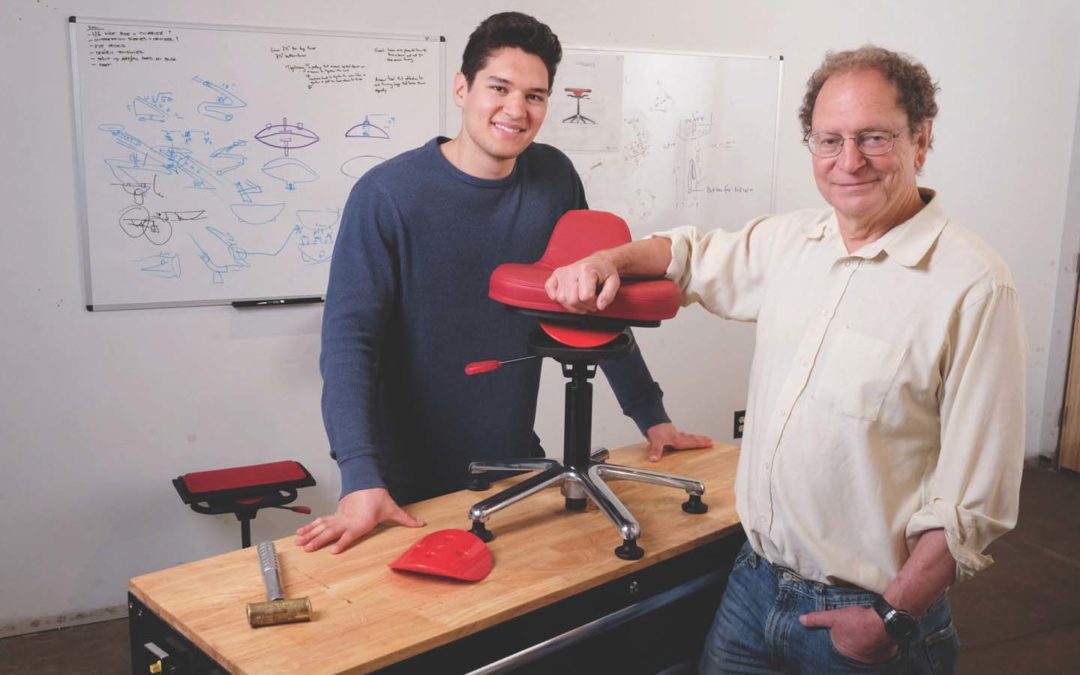 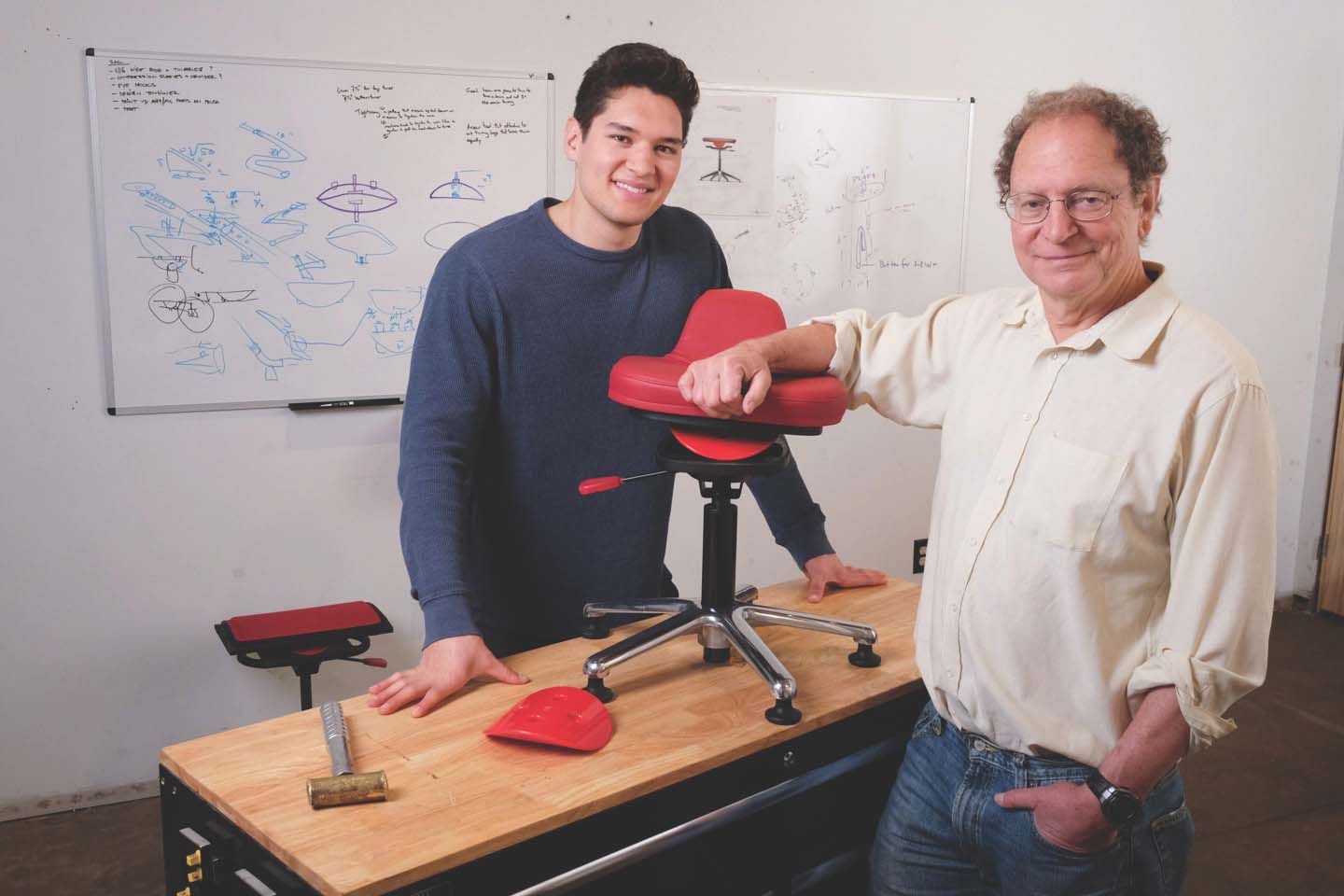 QOR360 CO-FOUNDER DR. Turner Olser, right, and company Chief Operating Officer Alexis Osler (Turner’s son) show off the active sitting chair that they say challenges the idea of what a chair does. Photo courtesy of QOR360
By Jon Kalish, VTDigger

A Colchester doctor and his son are hoping to change the way people sit. What began as a basement project in 2018 now employs the equivalent of six full-time workers who produce active sitting chairs — a style that has been used in Europe for 20 years.

QOR360 has sold its chairs to people in 31 countries, according to co-founder Turner Osler. The company expects to sell its 10,000th chair by the end of the year.

“Our little start-up is not trying to make a better chair,” Osler declared in a talk at TEDx Stowe in 2019. “We’re trying to upend the idea of what a chair is.”

His son Alexis, QOR360’s chief operating officer, added: “Active sitting is an idea that Americans don’t really know about and we think it’s incredibly good for people and it can change a lot of lives.”

Parts for the active sitting chairs are made in Newport, Milton and Williston. The chairs are assembled at Manufacturing Solutions Inc., a Morrisville plant that also produces Concept2 rowing machines.

QOR360 has free plans for do-it-yourselfers to make active sitting chairs for children with $10 worth of plywood, a lacrosse ball, bungee cord and felt. The plans have been downloaded more than 2,000 times. Osler, a retired trauma surgeon, claims that the company has put hundreds of active chairs under Vermont kids “for basically no money.”

Osler spent 30 years in operating rooms at UVM Medical Center before taking a desk job as a researcher. Although QOR360 is clearly a for-profit business, Osler believes it also has a public health mission.

When his desk job led to back pain, Osler tried all manner of ergonomic desk chairs, a Scandinavian kneeling chair and a yoga ball. He also spent thousands of dollars trying high-end active sitting chairs made in Europe.

Using a roller device, spring or combination of the two, the seats on these chairs tilt or bounce, forcing people to use the core muscles of their back and abdomen to remain balanced.

Osler became convinced he could design a better — and more affordable — active sitting chair. The QOR360 chairs have a patented plastic rocking mechanism that enables the seat to tilt 12 degrees in all directions. That’s as far as anybody wants to lean before they start worrying about falling, Osler said.

The rocking mechanism has been licensed to Mishu, a German manufacturer of high-end active sitting chairs.

“I’ve studied math and statistics and surgery and anatomy and epidemiology, so if anybody has a chance to riddle this out, I do,” he said. “These (active sitting chairs) are extremely expensive and as an epidemiologist I know that, if people can’t afford a solution, it’s no solution at all.” 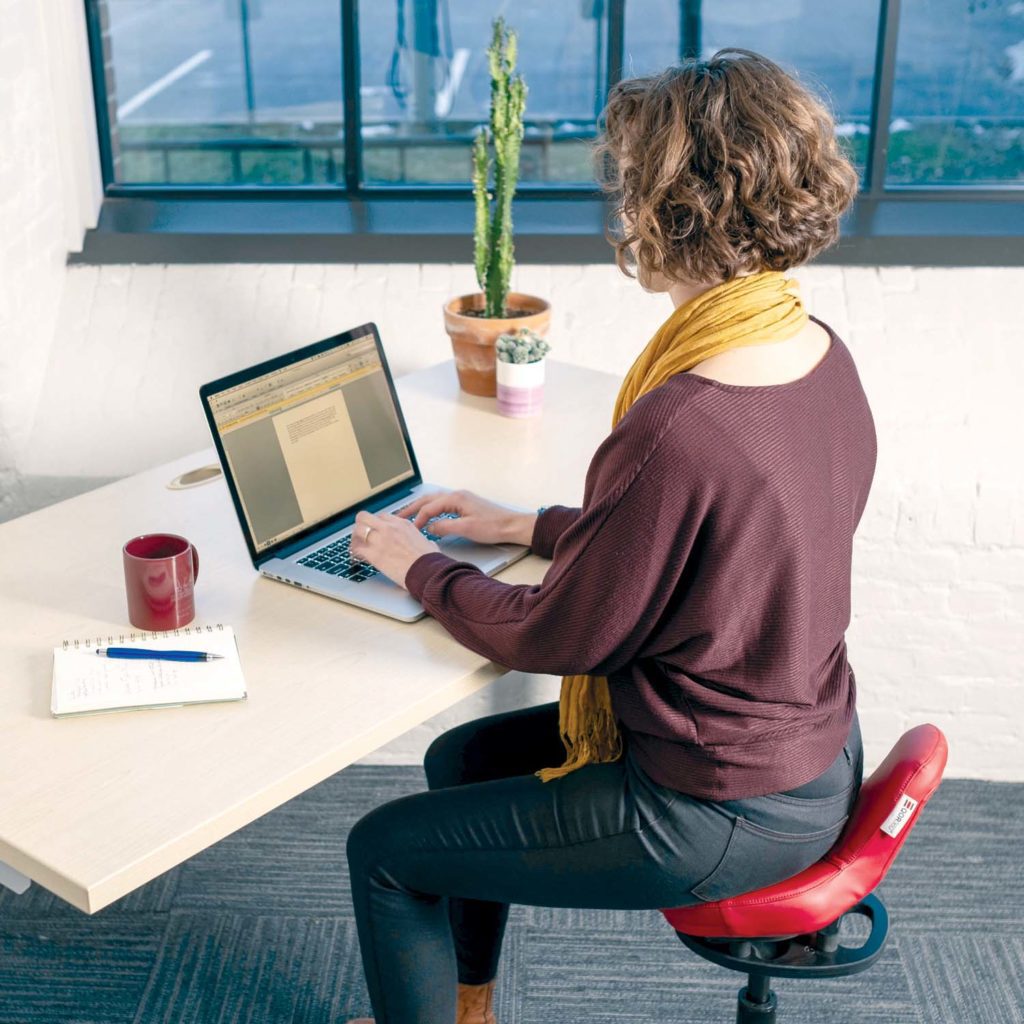 THE RED PLASTIC rocking mechanism in the QOR360 Ariel chair allows the sitter to rock a little and work their core muscles.
Photo courtesy of QOR360

DANCING ON THE CHAIRS

Active sitting chairs have been in use in Europe for 20 years. The Spinalis Spider chair is made in Slovenia and sells for more than $1,500 online. An Oregon company named Fully distributes the Swopper chair made in Germany, but has been out of stock recently. The Swopper is listed on its German manufacturer’s website for the equivalent of $630. Fully ran an ad during the Super Bowl showing people practically dancing on active sitting chairs.

The Ariel 1.0, QOR360’s best-seller, ranges in price from $395 to $460, according to the company’s website, depending on whether it’s ordered with a fabric seat or a leather one. The company’s priciest model, an all-wood chair called the Cleo 2.0, sells for $600.

Herman Pontzer, an evolutionary anthropologist at Duke University who studies metabolism, understands that, when you spend several hours a day on a traditional office chair, you’re hardly using your muscles at all. But when the muscles in your back and abdomen are deployed for active sitting, the body is burning the fatty acids known as lipids as fuel for those muscles.

The burning of calories lessens the chances of such metabolic disorders as obesity, diabetes and heart disease.

“If you are completely just limp, laying in a chair like a wet wash rag, then you aren’t pulling those lipids in,” said Pontzer, who stressed he was not endorsing any particular brand of chair. “There’s no need for those lipids and they just continue to pass the muscles by and float around in your bloodstream. So, keeping your muscles active in these otherwise resting postures keeps us healthy.”

“We’re evolved to be a very active species,” the anthropologist said. “So active resting postures, whether it’s some kind of active chair or a standing desk, I think that’s probably a good thing to try to work into the standard culture.”

THE CHAIR IN CLASS

More than 100 of QOR360’s kids chairs are in use at Westford Elementary School, thanks to the husband of a school employee. Lucas Jensen, who owns TreeHouse Hardwoods & Millshop in South Burlington, used his CNC mill, a computerized cutting machine, to cut the plywood parts. Students helped assemble the chairs, which have self-locking joints.

QOR360 had previously suggested using a tennis ball to make the seat tilt, but after a while the tennis balls collapsed, so it now recommends a solid lacrosse ball.

QOR360 calls its kids’ chair “The ButtOn Chair” because the round felt seat is secured to the wooden base with a bungee cord, causing it to look like a button with four holes for thread. But the pun was not lost on Sebastian Pante.

“You’re supposed to sit on it with your butt,” the second-grader noted.

Sebastian has fallen off his ButtOn Chair a couple of times but he’s still keen on it.

“It’s just really comfy and you can move around in it,” he said. “I really like moving around and it helps me get out more energy.” 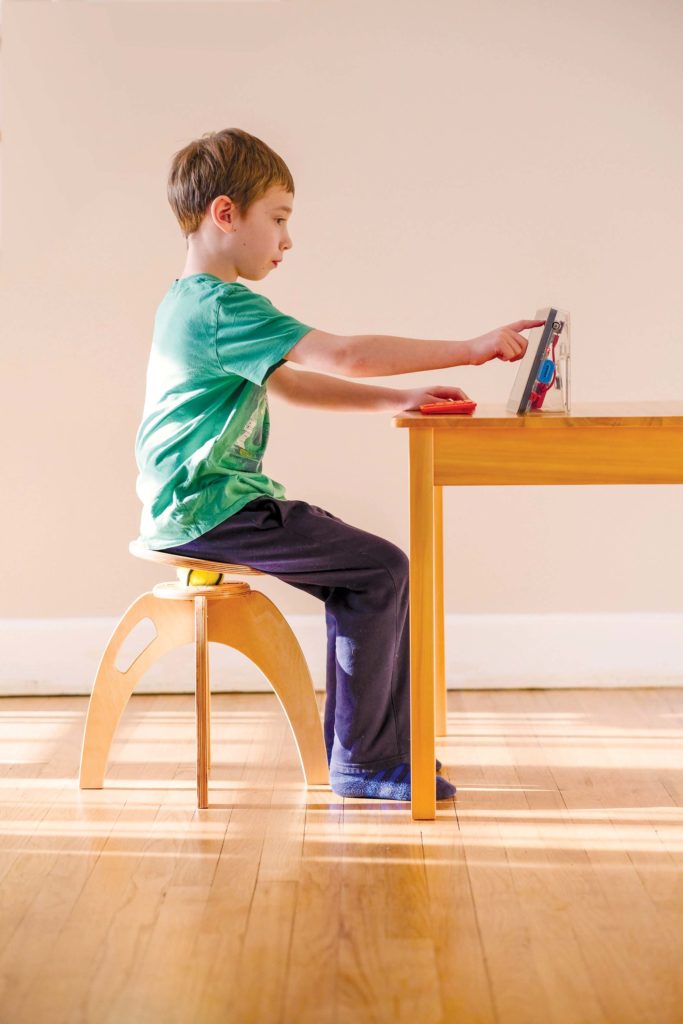 THE BUTTON CHAIR, which can be made with free downloadable plans, allow kids to be fidgeting while sitting in a classroom.
Photo courtesy of QOR360

His classmate Solveigh Wammer reports that, by putting her feet down on the floor, she can avoid falling off the chair. There are enough ButtOn Chairs at the school so that every second-grader can choose whether to sit on a traditional chair or a ButtOn Chair.

“Sitting in those normal chairs felt, like, normal and I wanted to try something new,” Solveigh said.

School counselor Stephanie Jones, who is married to Jensen, said the chairs allow students with a lot of energy to wiggle around in their seats without distracting their classmates.

“A lot of kids use hand fidgets to help them stay focused and this is an actual chair fidget, almost, that helps students that need to move a little bit stay at their seat and continue to work,” Jones said.

Osler likens the online distribution of the ButtOn Chair’s plans to “stuffing a chair through the internet. It emerges at the other end if somebody has a CNC router and some plywood.”

Those who lack access to a CNC router can still get free plans for cutting the plywood with hand tools. If the only hand tool one has mastered is a computer mouse, the chair can be purchased from QOR360’s website for $200.

After a full year of work by four engineering students at UVM, a free mobile app should be available this summer that uses a smartphone’s accelerometers to measure calories burned while sitting in a QOR360 chair.

The company has stationed a few of its chairs at Burlington coffee shops. One of them was promptly swiped. A bunch of ButtOn Chairs were in use in an eighth-grade STEM class at Edmunds Middle School in Burlington. When the classroom’s teacher retired, he took one with him.