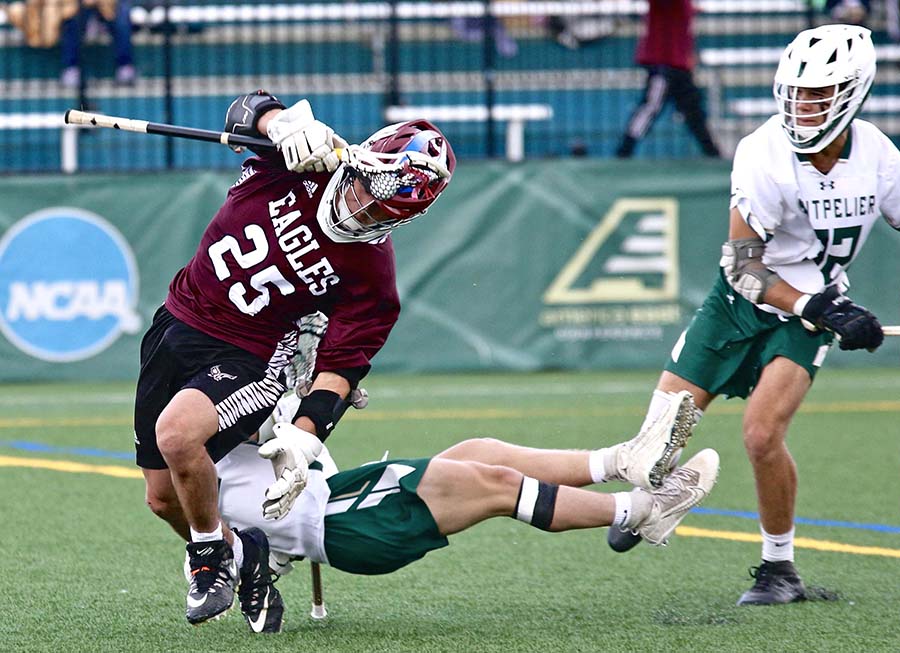 But at the University of Vermont on Thursday, June 9, defending champion and No. 2 seed Montpelier had other ideas.

The Solons (who had a record of 8-6) opened the game with a 4-0 run over the first 6:14, held off challenges from the Eagles in the first and third quarters, and ultimately pulled away for a 17-8 victory.

For sure the Eagles and Coach Ed Cook were disappointed, especially considering they had lost by only two goals at Montpelier in the regular season.

But Cook emphasized the positive afterward, including road wins over two higher seeds to reach the final, and the program’s success despite playing the entire season without senior three-year starting defender Carmelo Miceli, who unquestionably would have been the team’s best player.

“We scrapped and clawed our way through the playoffs, comebacks in both games. I’m proud of my guys,” Cook said. “It’s the first time Vergennes-Mount Abe lacrosse has been here. It’s a great accomplishment.”

As far as the regular season, although the team’s record is officially 5-10, without two forfeits for inadvertent use of an ineligible player MAV would be 7-8. 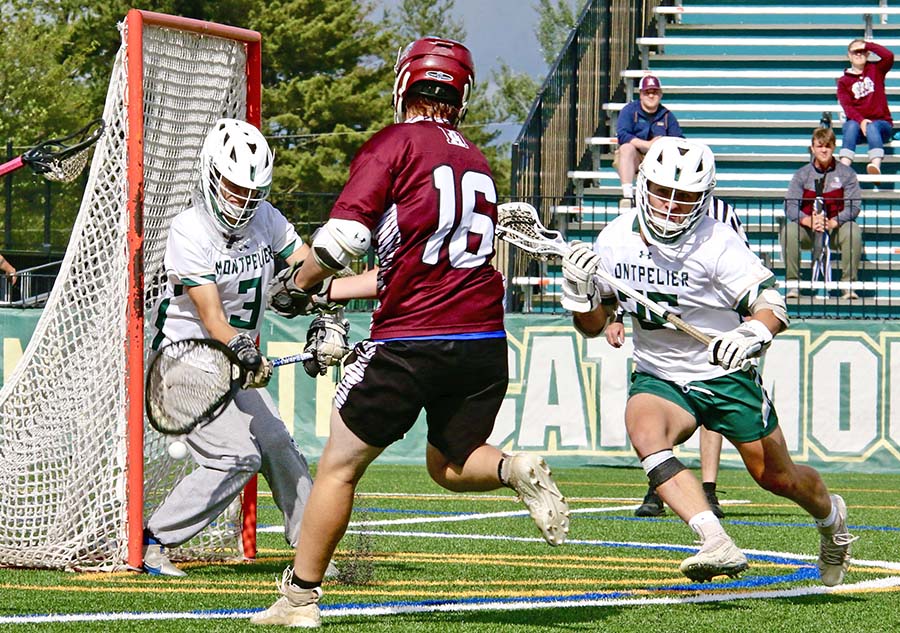 “We won a bunch of games, and we played a really hard schedule,” Cook said.

But it appeared early on in the final it might not be the Eagles’ day. Even though senior middie Taylor Stearns kept winning faceoffs, MAV had trouble holding onto the ball — with the exception of their first possession, when sophomore attacker Noah Ladeau pinged the post.

After that near Eagle miss, the Solons erupted. Nolan Lyford went solo for the first of his three goals 48 seconds in, and after an MAV turnover Greer Peloquin swooped in from the left side and made it 2-0 at 9:54. 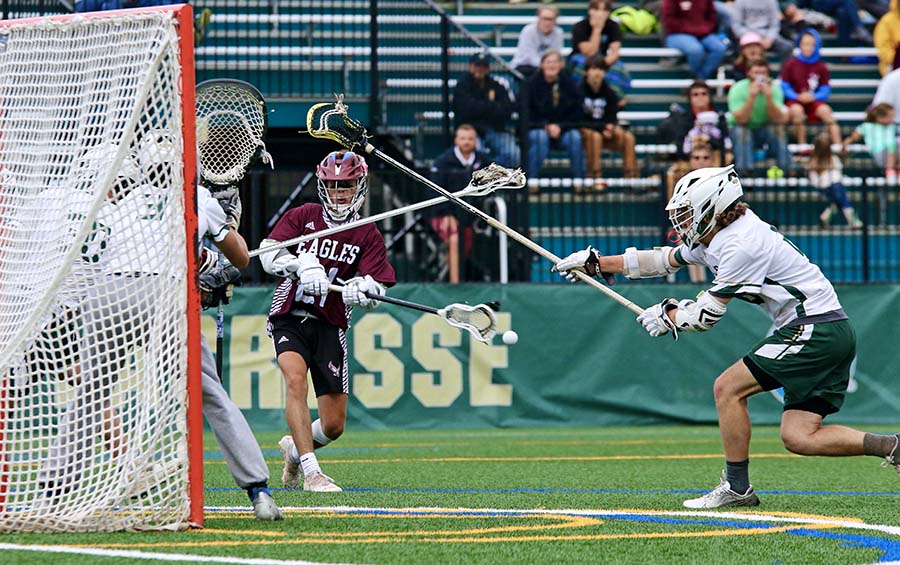 The Eagles had a man-up chance, but another turnover meant MAV goalie Connor Meacham had to make the first of his 17 saves. Then at 7:40 Solon Brendon Tedeschi won a groundball at midfield and turned it into a breakaway, and his first of four goals made it 3-0. At 5:46 Sina Fallahi added an unassisted goal, and the Solons led by four.

The Eagles tightened up in the back for the rest of the half, and the Solons scored just four more times before the break. And MAV broke through offensively late in the first quarter with two goals 26 seconds apart.

The first came when junior attacker Henry Anderson, from behind and to the left of the net, set up sophomore middie Andrew Nolan cutting, and Nolan found the lower left corner from close range. Then Anderson hit the same spot at 3:58 after taking a feed from the right from sophomore attacker Sawyer Shepard.

Back-to-back penalties stalled the MAV momentum, and Lyford took advantage of the second to bury a Fallahi feed at 2:12. Meacham made two big saves to close the quarter, which closed with the Solons up, 5-2. 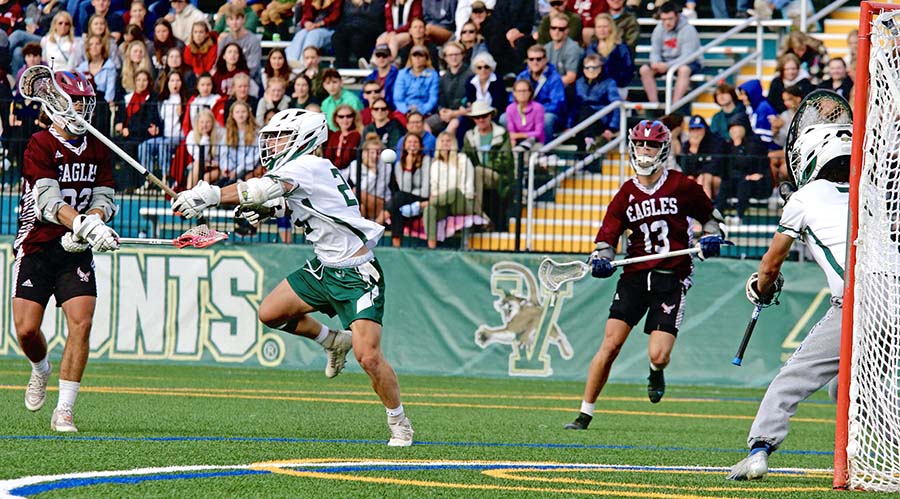 Meacham kept up the good work with three more stops early in the second, while the Eagles continued to struggle to generate good looks on Solon goalie Cal Davis, who made eight saves.

At 8:49 of the period Peloquin made it 6-2. The Eagles began to generate some shots, but Davis three times denied low Anderson bids from the top of the box, and goals from Lyford and Tedeschi pushed the Solon lead to 8-2 at the half.

The Eagles then came out firing. Stearns won two faceoffs, and both times Ladeau whipped home unassisted strikes. At 10:14 Shepard converted from close range, and the Eagles were back in the game at 8-5.

“We had great spurts,” Cook said. “We came out in the beginning of the third and scored a couple goals in a minute and a half.”

But Davis made a big save on Shepard shortly afterward, and then the Solons laid siege to the Eagles. The defense and Meacham held up for a time, but the Eagles had trouble clearing after stops, and finally they cracked.

The Solons poured in five goals over the final 5:35 of the period to make it 13-5 after three quarters. Tae Rossmassler scored twice in the run, and Lyford (on a fluke bounce), Tedeschi, and Dylan Good added one each.

Peloquin and Tedeschi both found the net to open the fourth and nail down the victory. The Eagles kept battling, and added two goals by Ladeau (tying him with Tedeschi for game honors) and one by Nolan in the late going, with Stearns and Sawyer Leonard picking up assists.

Seniors suiting up for the last time for MAV were Stearns, defenders Collins Dupoise and Jade Edwards, and long-stick middie Creed Stillwell. 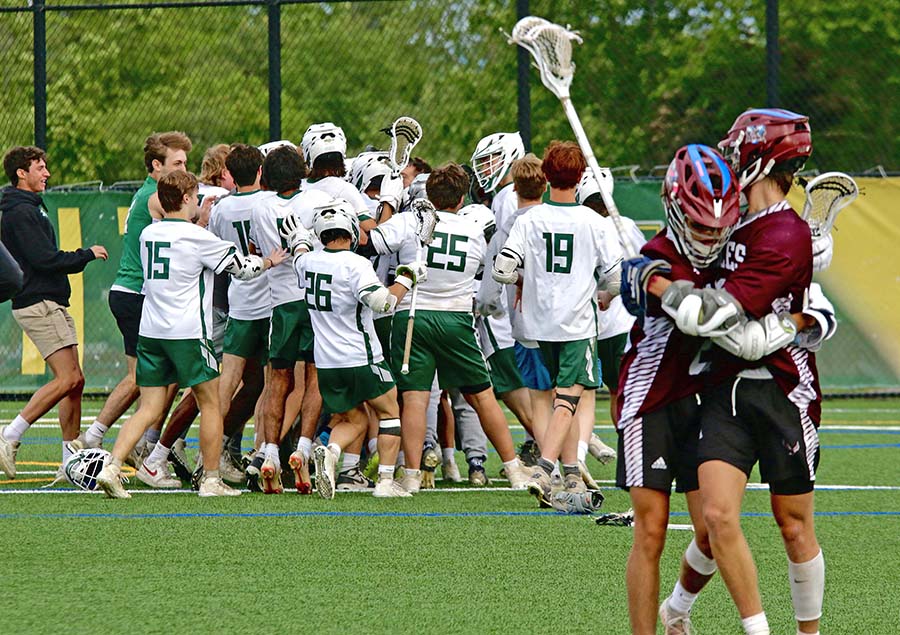 Cook said those four will be missed, but he believes the program will continue to thrive.

Cook also pointed to the growing feeder program in the two communities, and he hopes this spring’s playoff run might generate a bit of buzz for Vergennes-Mount Abe lacrosse.

“As it went along it became apparent we had the wheels and the sticks to get here,” Cook said. “And we did. We came up short. But we’ve got something to build on.”