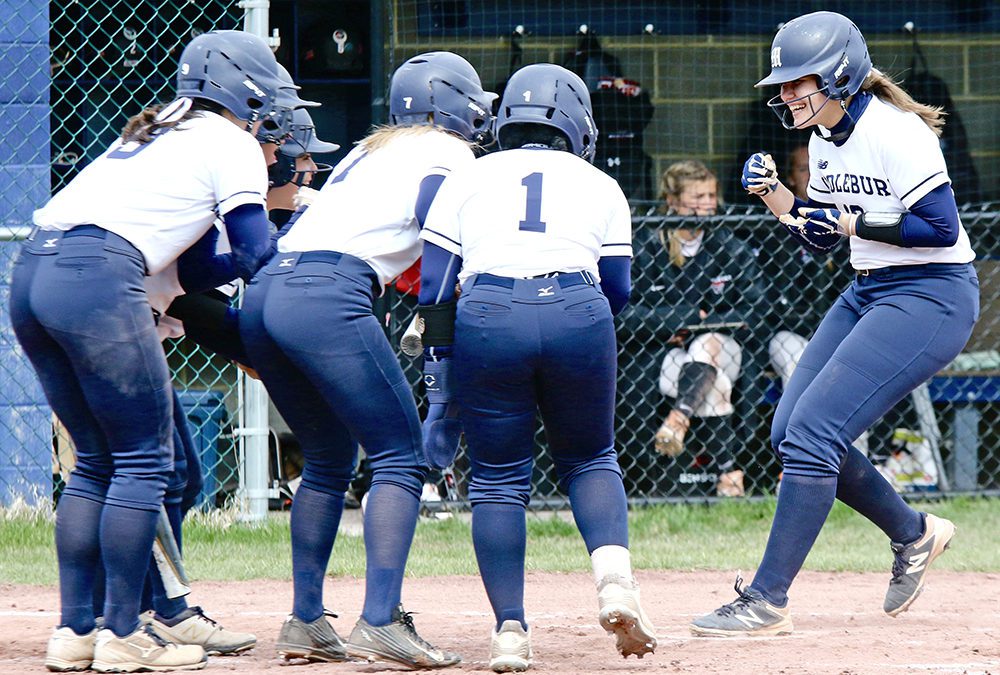 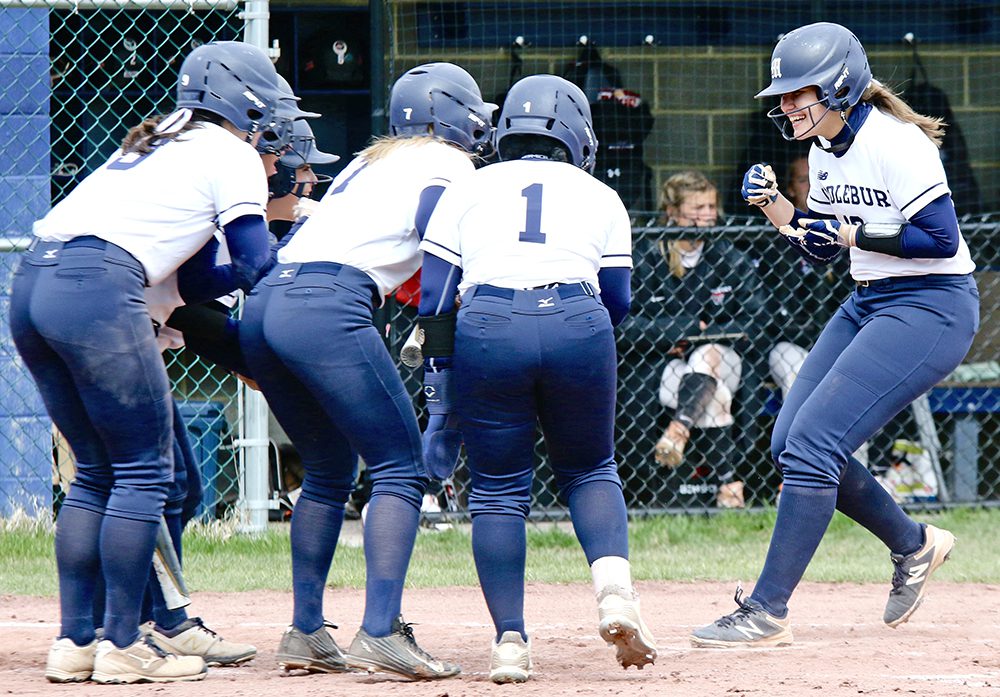 THE PANTHERS GREET senior Noelle Ruschil at home after her grand slam broke open the second game of the Middlebury softball team’s home doubleheader vs. Wesleyan on April 23. Ruschil’s two homers in the game gave her the program’s career record and helped the Panthers to a sweep of the series. Independent photo/Steve James
By Blaise Siefer

MIDDLEBURY — Back on April 15 the Middlebury and Hamilton college softball teams were tied entering the final inning of a midseason game, one with significant implications for the NESCAC standings.

In the Middlebury dugout, silence permeated –– the pressure was on.

It was quiet until Noelle Ruschil, Middlebury’s senior captain, exclaimed to her teammates: “Doesn’t this just make you love softball? It’s so exciting.”

Abby Santis, a junior on the team, smiled as she remembered Ruschil cutting through the tension.

“She helps us remember why we love this sport,” Santis said. “It’s to play and have fun, not to be stressed.”

Ruschil’s teammates and coaches would say this moment encapsulates her perfectly. In a game that can often feel nerve-wracking, Noelle helps her teammates remember why they play in the first place.

This mentality, combined with her talent, begins to explain why Coach Kelly Bevere calls Ruschil the best player she has ever worked with in her 18 years coaching at Middlebury.

The Panthers finished at 20-10 and reached the NESCAC semifinals this season, one of their best. They were hoping for an at-large bid to the NCAA tournament, but sadly none was forthcoming on Monday. Only the teams that battled for the NESCAC title this past weekend, Amherst and Tufts, both with better records than the Panthers, were selected from the league.

Still, as Middlebury competed in what was still a successful spring, Ruschil’s leadership and statistical contributions were indispensable. 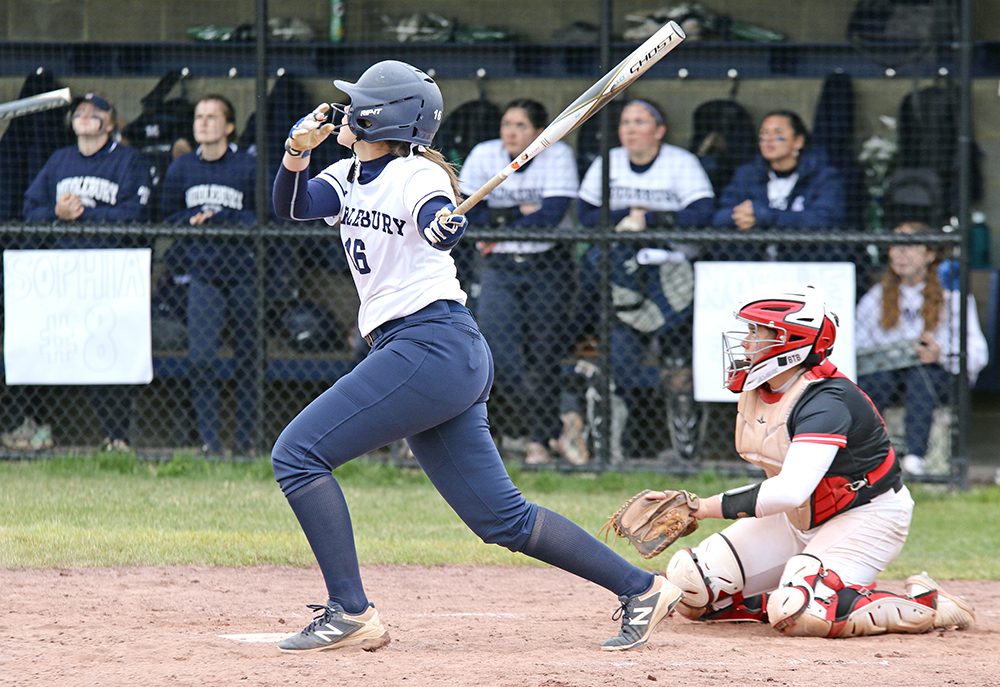 As of Monday, she led NESCAC in batting average (.484), homers (15), RBIs (48), on-base percentage (.565), and slugging percentage (1.108). She has smashed multiple program records, including the career home run mark and single-season home run and RBI records.

Since she began playing softball at the age of seven, Ruschil’s athletic ability was clear. When the coaches of her older sister, Marissa, first saw her play, they raved to Ruschil’s parents about Noelle’s natural talent. From then on, softball was her sport.

Because there weren’t many teams near Ruschil’s hometown of Katonah, N.Y., she consistently played in older age groups. When she was 15, for example, she played in an 18-and-under league. The only year she wasn’t the youngest on her team was as a senior in high school.

“(There was) a lot of sports playing when we were young,” Ruschil said. “My dad used to build an outside ice rink, and he’d put me through hockey drills that my brother had to learn. We were fortunate to have a lot of places to practice and play all sorts of sports.”

Ruschil grew up as a catcher, but during her senior year of high school she tore her ACL. The injury sent her on a long road of recovery, extending into her rookie season at Middlebury. As she healed, Noelle switched to playing third base, where she’s become a mainstay.

Her rookie season in Middlebury, Noelle started in all 31 games, batting .374. Despite a successful season, Ruschil was still easing back from her injury, and she and her coaches knew she was capable of more.

“She was really good her freshman year but … she wasn’t full strength,” Bevere said. 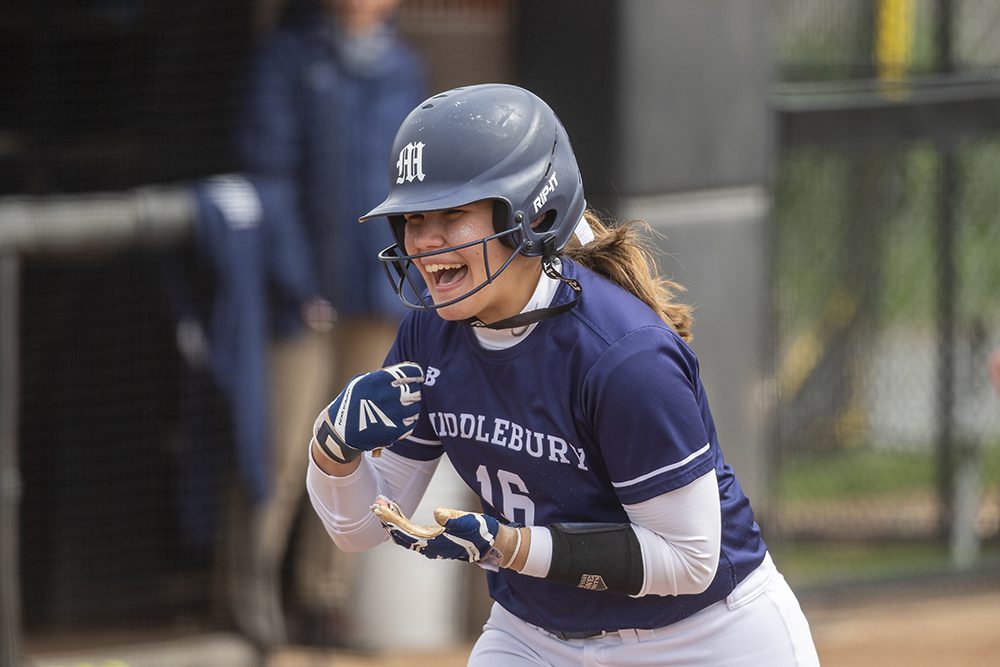 IT’S NOT UNUSUAL to see this kind of smile on record-setting Middlebury College senior third baseman Noelle Ruschil when she plays softball. Her coach and teammates say the joy with which she plays is contagious.
Photo courtesy of Steve McLaughlin

The pandemic upended Ruschil’s sophomore season in 2020, and then there was a makeshift 15-game season last spring. These patchwork seasons helped build the anticipation for spring 2022 –– and she took full advantage.

Bevere isn’t surprised by Ruschil’s contributions: “She’s the best player that I’ve ever coached. The umpires are joking. ‘She hasn’t hit an HR yet, what’s going on?’ When she hits the ball on the ground, it’s kind of shocking.”

Breaking multiple program records is impressive, of course, but even more remarkable is that Noelle has basically accomplished it all in one season. Ruschil has hit 15 of her 20 career home runs this spring.

APPROACH TO THE GAME

Ruschil partly credits her success to her mechanics, ability to read pitchers, and to confidence in her approach.

Since she was 14, Ruschil’s worked with a personal batting coach, Cassie Reilly-Boccia, a former softball player at the University of Alabama. During school breaks, Ruschil trains with Reilly-Boccia, who not only helps her mechanically, but also mentally.

This work on the mental side of softball is certainly paying dividends. Ruschil said she has more belief in her ability than ever. Some practices, she won’t even swing her bat, taking a “mental day.” It’s a practice that other teammates have begun doing, too, emphasizing the power of visualization.

“I’ve asked her about her mentality going into the box because she looks so calm,” Santis said. “And I struggle a bit more with getting nervous. She seems so confident.”

Bevere also believes that Noelle’s character factors into her success.

“The thing that’s really impressive about her is the person she is,” Bevere said. “She’s the best teammate you could possibly want. She’s a really good person and I think it makes her a better player.”

Ruschil is more of a quiet leader, but teammates and coaches say she picks her spots and knows when to hype up the team. Take the game against Hamilton for example, when a reminder of the joy of softball helped calm nerves.

Bevere said she’s already asked Noelle, a Conservation Biology major at Middlebury, to come back and help coach for the Panthers after graduating this month. Ruschil says she’s thought about coaching, but at the moment her post-graduation plans are still undecided.

Even without an NCAA tournament to cap her career, Ruschil said she and her teammates will take away a lifetime of memories.

“I feel really bonded to this team,” Noelle said. “All the little antics, like the dances in the dugout for the walk-up songs. We have all these little phrases like ‘fire me up’ and ‘play fun.’ That’s something that everyone is going to remember doing.”